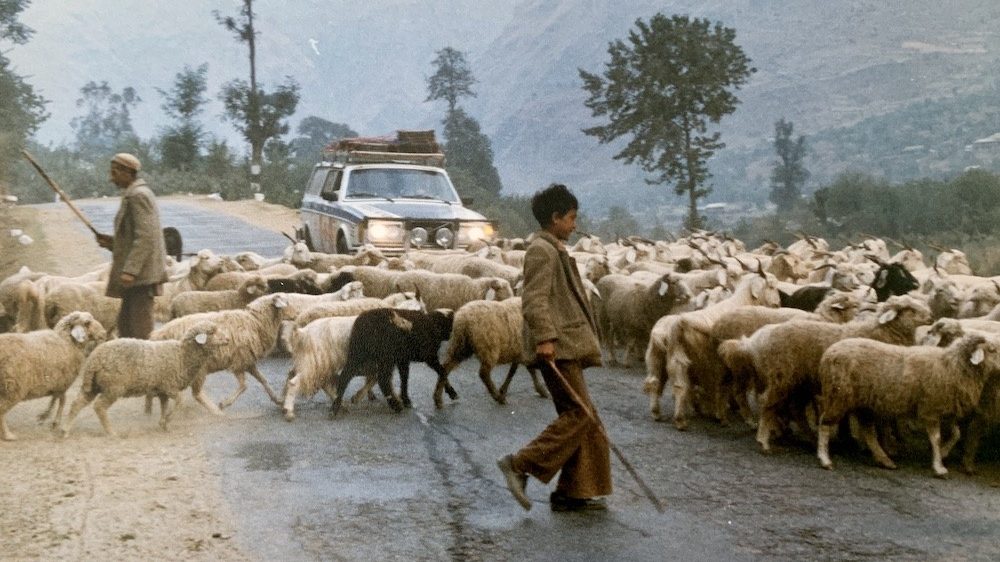 Driving Around the World – Week 5: Nagpur, India to Lahore, Pakistan

Driving Around the World – Week 5 – Forty years ago this month, Garry Sowerby and Ken Langley were attempting to break the Guinness around-the-world driving record in Red Cloud, their 1980 Volvo 245 DL. Today, Garry brings us to the heart of India and then on to Pakistan amid worries of how to get around the Iran-Iraq war.

The first thing I wanted to do was go back to sleep. But no, Day 27, October 2, 1980, of our quest to drive around the world in record time was waiting. Stepping onto the private balcony of my bedroom, I looked out over the manicured grounds in the still dawn.

A security guard in a crisp Bengal Lancer-like uniform looked up and snapped off a salute. The knock on my door was a butler bringing fresh coffee and a crisp copy of the Times of India newspaper.

For a moment I forgot what awaited – another long day driving through the squalor, commotion and congestion of one of the most densely populated areas on Earth. 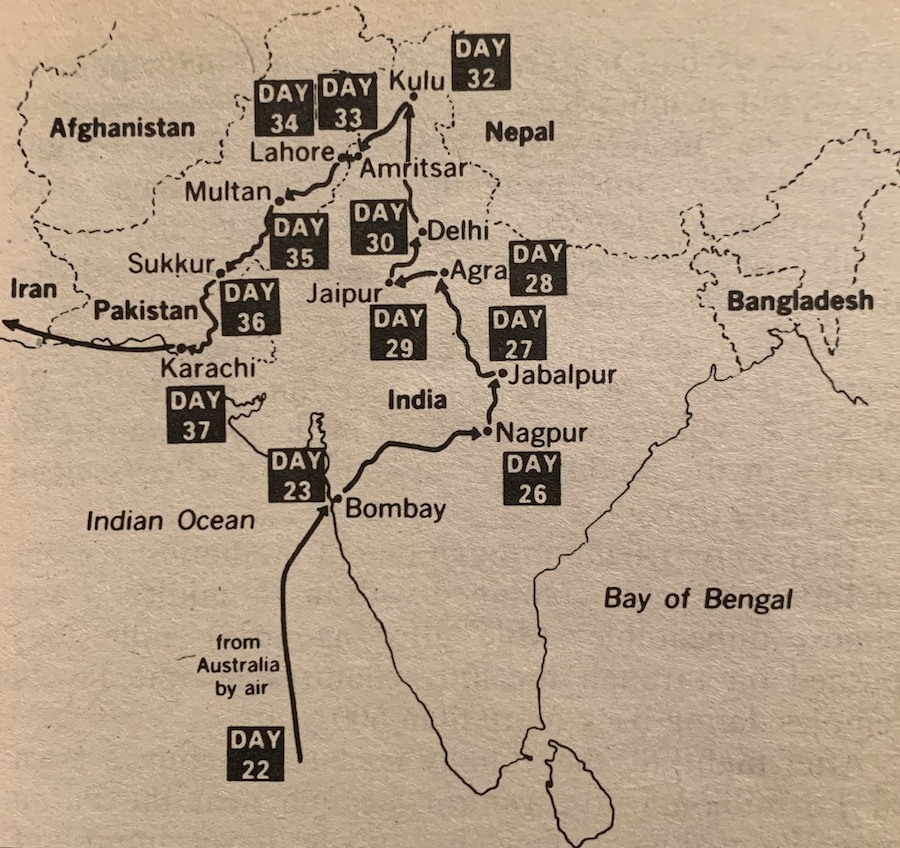 At breakfast, our host Mr. R.B. Cyrusi, Managing Director of one of India’s leading textile factories, told us the military had checked during the night and the route from Nagpur and Calcutta was blocked by a series of floods. Disgruntled striking government workers were a problem as well.

Floods, blockades and how to get around the Iran-Iraq war – just another day behind the wheel when trying to set a Guinness around-the-world driving record

There was still no word from Al McPhail in our Canada office about how we were going to get around the Iran-Iraq war. We would have to find another route to New Delhi. Following the military commander’s recommendation, we decided to drive north to Jabalpur.

After one of Mr. Cyrusi’s drivers lead us out of Nagpur, we followed a winding jungle road teaming with screaming monkeys. For hours, we slowly wound through the Satpura Mountain Range, half expecting to see Akela or Bagheera from Rudyard Kipling’s The Jungle Book.

Although we would be winging it for the next few days, we were in a good mood. Our digestive systems had settled down so, without repeated unplanned stops, we made as much progress as anyone could driving through central India.

I drove only 70 or 80 km/h, but it was faster than the general traffic flow. It was a game of constant passing made even more dicey because we were driving on the left side of the road. Besides hordes of people, rickety rickshaws, lumbering elephants and swerving bicycles, there were grotesque, overloaded Tata transport trucks and large buses, packed to the roof with riders. 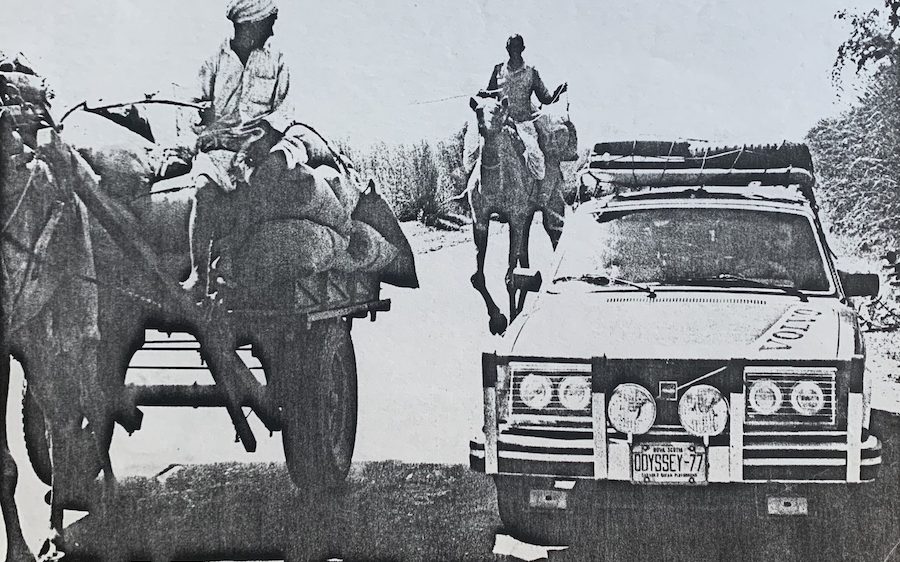 Driving through countless small villages, we noticed the men were always at one end of the village, doing their morning routines, while the women washed up at the other end. On the roads, families were set up, seemingly in the middle of nowhere, working on repairing a single pothole.

Would the Volvo continue to run on the kerosene-laced fuel of India? Winging the route now, the team had to stop overnight where they could.

Without mobile communications, we could only hope our Canada office was making progress on a way to get around Iran. I hoped Red Cloud continued to run on the kerosene-laced low-octane fuel of India and the bouts of dysentery we’d been experiencing were behind us.

As the sun was setting, we reached Jabalpur, a small city by Indian standards, sitting on a 3,500-foot plateau. Ken spotted a flickering neon sign that said Jackson Hotel. We pulled into the quadrangle of tidy buildings and asked for a room. 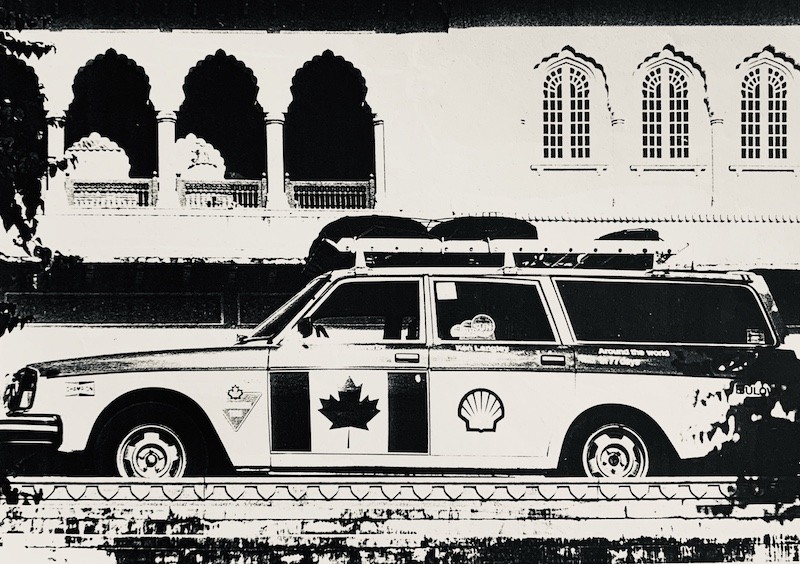 We were treated like visiting relatives. After dinner, I presented the owners with one of the tacky CN Tower models we were given to hand out to special people we met along the way. I wonder if they still have it.

The next day, we overnighted in Agra and, after the best sleep I experienced in India, we took time to visit the Taj Mahal, one of the most iconic buildings in the world. We figured ‘why not?’. After all, it’s not every day you drive by the real Taj Mahal.

The contrast of rich and poor was mind-boggling. We passed long lines of merchants displaying their wares, hypnotic snake charmers, food carts to torture our bowels and the poor, with hands outstretched, hoping for a spare rupee.

That night at the over-the-top Rambagh Palace hotel in Jaipur, we received a message from Sandy Huntley, who was waiting for us in New Delhi, with news about our Iran-Iraq war detour.

Ken met a British Airways flight attendant and, of course, fell in love. I sipped gin and tonics at the bar, spinning road stories to a group of foreign businessmen.

Avoiding Iran was a major problem. Getting into Afghanistan might be possible, although the Khyber Pass was opening and closing at random and the last thing we wanted was to get stuck there.

One option we hoped would work was to travel through the Soviet state of Turkmenistan to Turkmenbashi, take a ferry across the Caspian Sea to Baku, Azerbaijan, then drop down into Turkey. But since there was no way the Soviets would allow entry from Afghanistan or Pakistan, the only option was to fly over the war to somewhere in the Middle East.

Sorting this out while driving almost non-stop through India was obviously a problem. Doing it with no form of mobile communications made it almost impossible.

A day off in New Delhi would help with planning how to skirt the Iran-Iraq War; you couldn’t just pick up your cellphone and order up a solution

We planned a day off in New Delhi where we checked into the full-service Sheraton Hotel. To Ken’s delight, the British Airways stewardess he’d met the night before in Jaipur was there. I still don’t know the whole story because, although Ken and I were and are the best of friends, the play-by-play of such encounters was never discussed.

There was a message from Canada with more details about how we were going to handle the Iran situation.

German Cargo, Lufthansa’s freight division at the time, had a Boeing 707 returning to Frankfurt from Bangladesh in six days. It would be loaded with carpets but there was enough room for Red Cloud.

They had secured landing rights in Karachi, Pakistan’s largest city and main seaport on the shores of the Arabian Sea.

It would cost a hefty $18,000 US, including transport for Ken and me. We would accompany the car as ‘special couriers’, whatever that meant. Details of where we would land after flying over the war were being worked out, somewhere in the Middle East.

The race to Karachi, almost two thousand kilometres away, was on.

We had extra time but needed to replace the distance lost by the flight to ensure we met the Guinness rule of driving one equator length.

So we planed a detour into the Kullu Valley in the Indian Himalayas and stretched the European route to include driving into the Scandinavian Arctic.

On October 7, 1980, we headed north out of New Delhi toward the Himalayan foothills then worked our way along the narrow treacherous road to Kullu. That night, we feasted on spicy curried goat, yogurt and herbal teas. 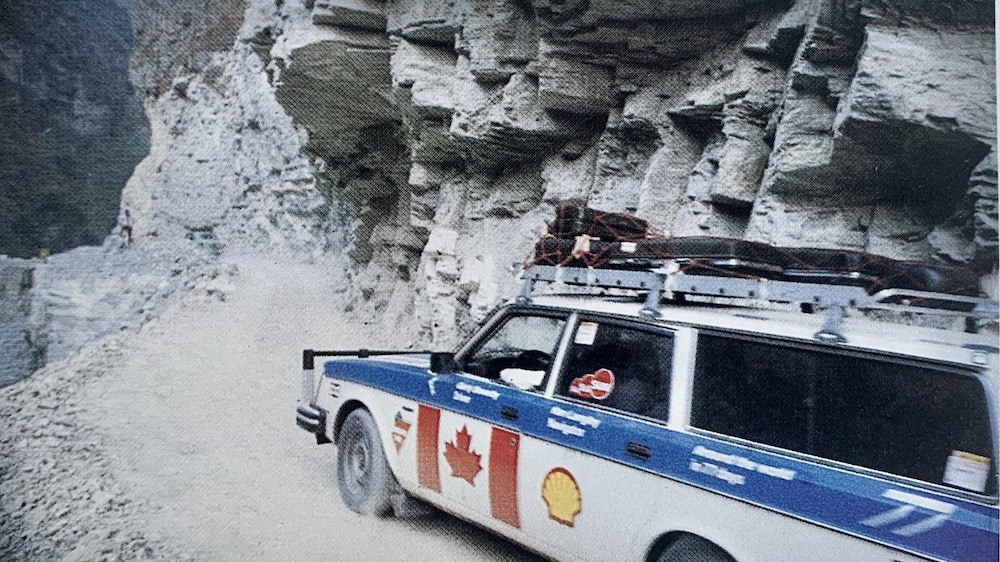 Although our hotel room had a dirt floor, the beds were clean and comfortable.

The next morning, we were stopped five times by striking Indian government workers who would be stoning cars competing in the Himalayan Car Rally a week later. Each time, we harnessed enough Nova Scotian charm to talk our way through the blockades. 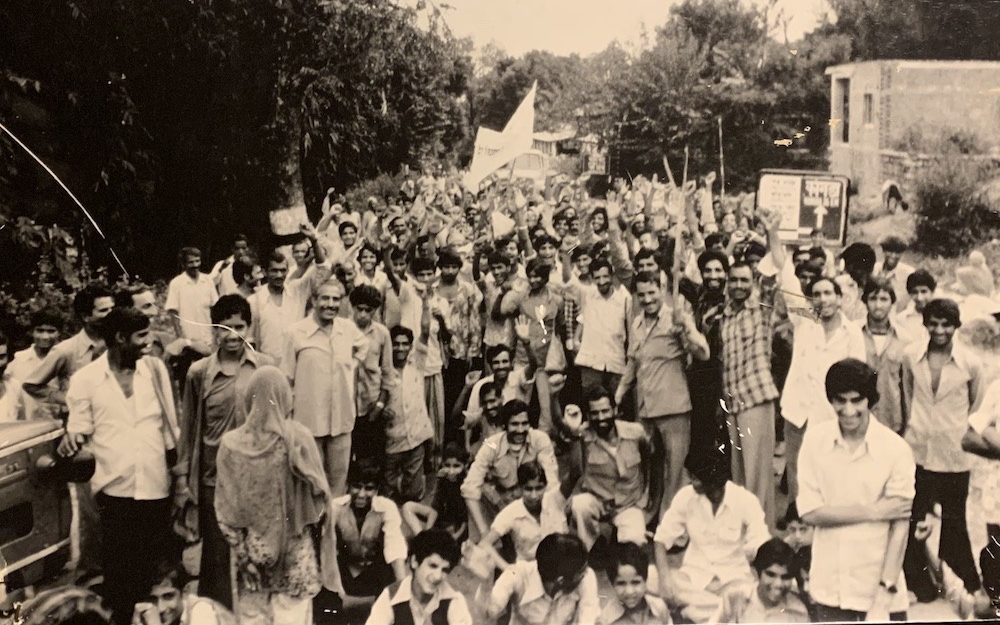 The day was fraught with delays and close calls, dodging overloaded trucks, barreling down narrow mountain roads. In the afternoon, a ferocious thunderstorm slowed us to a crawl. Bolts of lightning cut the bruised sky as grape-sized hailstones pummelled the car.

We continued west, at times pushing through water up to the bottom of the door sills.

It became obvious we wouldn’t make Pakistan that night, so we stopped in Amritsar, home the Golden Temple, holiest of all Sikh shrines.

Hopelessly lost in the maze of streets, we hired a rickshaw driver to lead us to a hotel, a navigation method that was becoming the norm in the sprawling Indian cities we traversed. I loved that, following a smoke-spewing contraption through the chaos of life in India.

Pungent fragrances of exotic spices wafted through the car. A symphony of diesel engine rattle, worn squealing brakes and blaring horns played to the incessant bantering and bartering that was street life in Amritsar.

The rickshaw eventually pulled up at the Amritsar International Hotel, a modest place that, if nothing else, was dry. We asked for accommodation with two beds because we didn’t want to sleep alone in a room along with whatever might creep or slither on by.

The room was a musty hovel with one rusty steel-framed bed shoved against a wall adorned with fresh stains I didn’t want to think about. Greasy yellow curtains dangled over a small open window looking onto a crumbling stone wall.

A second bed was promptly wheeled in, a narrow portable affair resembling a 19th century operating table. Ken lost a rupee toss and got the squeaky cot. I declared it the ‘GT bed’, and we retired.

At sunrise, the sounds of worship woke me. The GT bed was empty. I found Ken in a sweaty stupor, stretched out in the car with 42 bed bug bites. He couldn’t stop scratching or laughing at the predicament.

Border formalities between India and Pakistan were smooth and quick, thanks to the help of Volvo of Pakistan. Only 1,200 kilometres more to get to the cargo plane that would take the team and Red Cloud over the war

We didn’t talk much on the short drive to the Pakistan border. It was always like that approaching a border when time is your enemy. There are a hundred reasons for border delays, so contemplating them feeds silence.

We were through in two hours. Quick by subcontinent standards of the day, thanks to the folks at Volvo in Lahore who were waiting on the Pakistan side, greasing egos and palms.

Lahore, Pakistan’s capital city, was a short drive so we checked into the hotel early. With another 1,200 kilometres of Pakistan waiting, war escalating in Iran and still no word on where the plane would take us, there was plenty to do.

First on our list, the Mayor of Lahore, the Chief Magistrate and a gaggle of reporters were waiting at a reception, hungry for tales of the road from the two Canadians driving around the world.

The Police Chief wanted to talk to us, too. In private. Something about what to expect on the long drive south to Karachi.