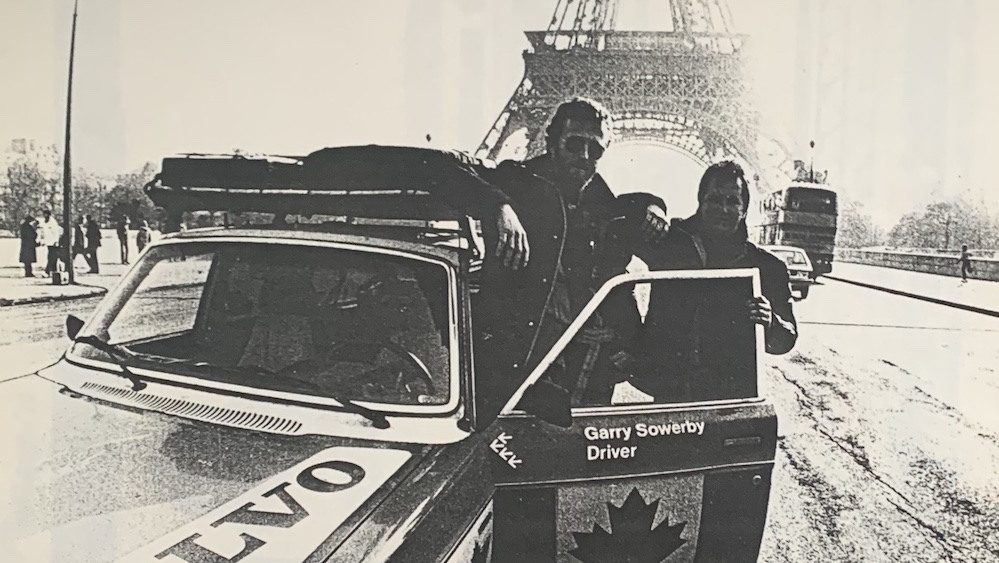 Driving Around the World – Week 9: Monte Carlo to London

Driving Around the World – Week 9: Forty years ago this month, Garry Sowerby and Ken Langley were attempting to break the Guinness around-the-world driving record in Red Cloud, their 1980 Volvo 245 DL. This week, Garry and Ken grapple with road ennui, constant throbbing pain in Garry’s throttle leg and sleep deprivation.

When you’ve been on the move for months, waking up for the second time in the same room is a treat. When it happens in an over-the-top, white-on-white suite in one of the world’s finest hotels, it’s a dream.

This was the case on Day 57 of our attempt to drive around the world in 77 days or less, a goal Ken and I had set, that would eclipse the existing 102 day record by at least 25 days.

Our ‘day off’, while wallowing in luxury at Monaco’s iconic Hotel de Paris Monte Carlo, had been filled with press meetings and filming sessions with the two film crews that had followed us through western Europe.

Mobile communication was a sketchy business in Europe in 1980. The break gave us a chance to work the hotel phones and teletype system. Since there were no cell phones, internet, laptop computers or even fax machines back then, we had to sort out plans for the next week on land-line telephones or cumbersome teleprinter machines.

We were still short on distance for the record. According to the Guinness rules, the clock had continued running during the unforeseen flight over the Iran-Iraq war, but the distance didn’t count.

The plan was to get to London on a 4,900-kilometre route along the Mediterranean coast of France, around the perimeter of Spain then back through France to England. 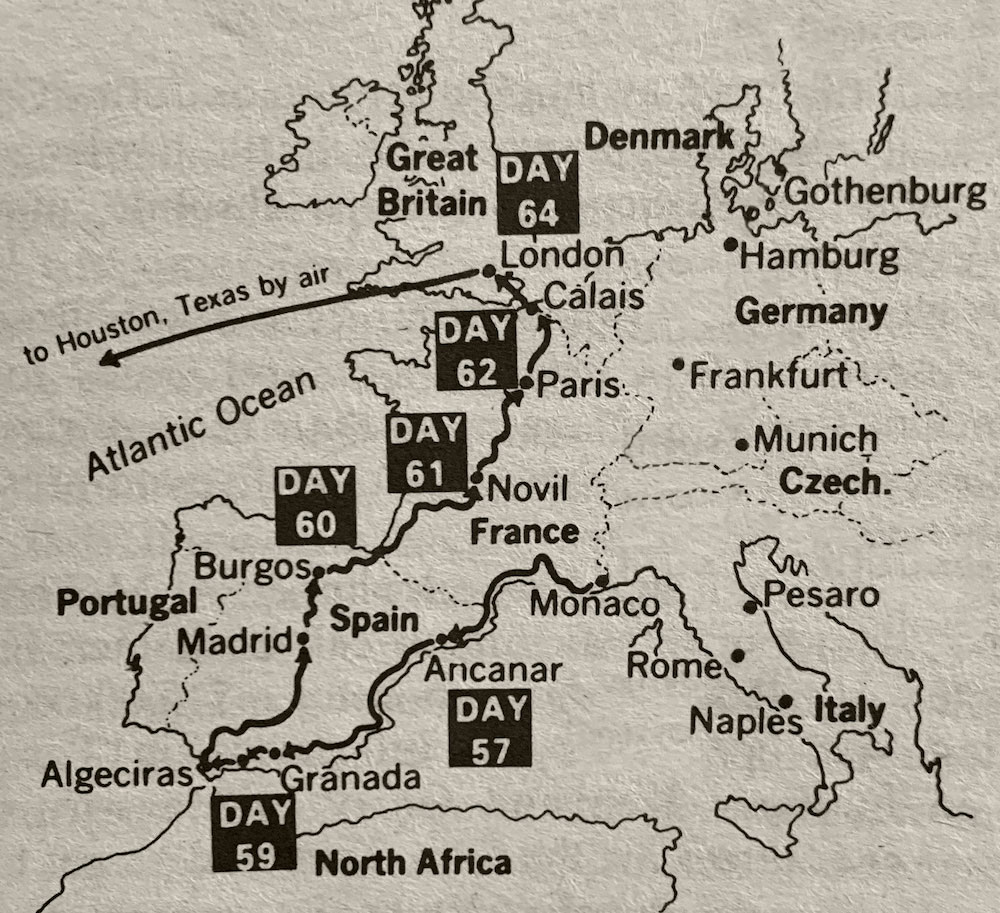 From there, we would prep Red Cloud for its fourth and final air lift, this one over the Atlantic Ocean back to North America.

We felt rested and optimistic packing Red Cloud. The day off had been a welcome break for the knee of my stiffening throttle leg. For the first time in two weeks, it wasn’t constantly throbbing.

That morning leaving Monte Carlo, we zipped along the Cote d’Azur, past the storied hotspots of the rich and famous – Nice, Antibes, Cannes and St. Tropez. We didn’t stop to soak up the culture though.

By late afternoon, we were in the shadows of the mighty Pyrenees, the 21,000-square-mile mountain chain that separates Spain from the rest of Europe.

The roads through the mountains were winding, twisting and rife with slow moving truck traffic, not the freeways of Germany and Italy or the empty roads of Scandinavia. As a result, I was constantly working the transmission and with every shift I felt a twinge of knee pain as I came off and on the throttle.

I confessed to Ken that, for a fleeting moment, I had entertained the idea of asking him to drive to give my knee a break.

We would, of course, and that was enough to endure the pain. In fact, Ken never got behind the wheel of Red Cloud on the entire trip, not even to move it around when parked at a hotel or press venue.

By the time we crossed the border into Spain and settled into a random roadside hotel, both film crews had peeled off for Paris and London. We were on our own again.

The next few days in Spain was a blur and 40 years later, it still is.

Leaving Algeciras, the Spanish port city next to Gibraltar, Ken didn’t want to get into the car to face another day of road prison, as our quest was beginning to feel. I coaxed him into the car. Later that day, after a quick lunch stop near Cadiz, Ken had to coax me to strap in behind the wheel.

Over the next two days, we rallied, imagining the finish line.

We had fun talking about the activities we might get involved with post-event. Surely there would be a tour of auto shows, TV appearances, sponsor advertising and keynote speeches.

We made it to Paris on schedule for a police escort along the Champs-Elysées to another gratis five-star hotel where we would bunk down for our last overnight in continental Europe.

I went to bed early, my knee still aching. But sleep never came and I lay awake tossing and turning all night.

After a morning press conference at the Canadian Embassy we got another police escort out of Paris. Adrenalin fueled me to London, where we would prep the car for the flight back to North America the next day.

I lay in bed wide awake that night as well, my mind going to dark places – looking for problems, loss of confidence, depressed that we were so close but so far from completing the mission.

Sleep deprivation is an ugly thing. The next morning, while Ken and advance man, Sandy Huntley, made preparations for the flight, I went for a walk through Hyde Park.

I was terrified that I was losing it. Emotional, tired and limping, it entered my sleep-deprived mind that I might not be able to go on. Without me, the only driver allowed for the record according to the Guinness rules, everything would stop.

Even decades later, I still consider that morning one of the scariest experiences of my life. I was convinced I was about to snap.

That afternoon, we got the car on a British Caledonia DC-10 passenger liner and flew to Houston, Texas. There was no sleeping on the day-flight but we were in Business Class so I could stretch my legs out.

In Houston, TV cameras rolled while reporters peppered us with questions, eager to hear about the trip and how we felt about the home stretch coming up.

Later, after checking into the Houston Oaks Hotel near the airport, I immediately fell into a dead sleep. Eventually my eyes popped open. I knew it was the end of sleep as my mind raced, realizing we were back in North America.

When I opened the black-out curtains, it was still dark outside. I had slept 20 minutes, and was wide awake.