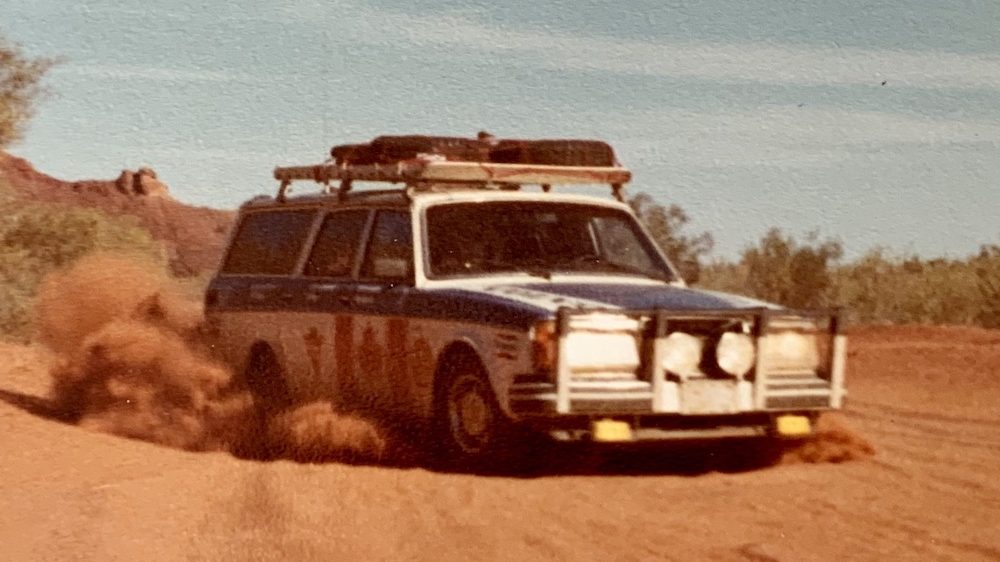 Driving Around the World – Week 2 – L.A. to Mount Isa, Australia

Garry Sowerby takes us along, in the 1980 Volvo, dubbed Red Cloud, as he and Ken Langley attempt to set a Guinness Record for Fastest Circumnavigation of the World by Car, exactly 40 years ago.

Strange to be overnighting in Los Angeles without Red Cloud.

It had only been a week since we began the around-the-world trek in Toronto but our new 1980 Volvo 245DL, nicknamed Red Cloud, was firmly entrenched as the third member of our team.

Going to sleep in a Marriott hotel near LAX, I wondered where the Pan Am Boeing 747 cargo jet carrying the car and all our equipment was.

The 3-month-old Volvo wagon was somewhere in the stratosphere between southern California and Sydney, Australia. Visions from high school geography class about South Pacific places like Tonga, Fiji, Hawaii and the Marshall Islands played in my mind. 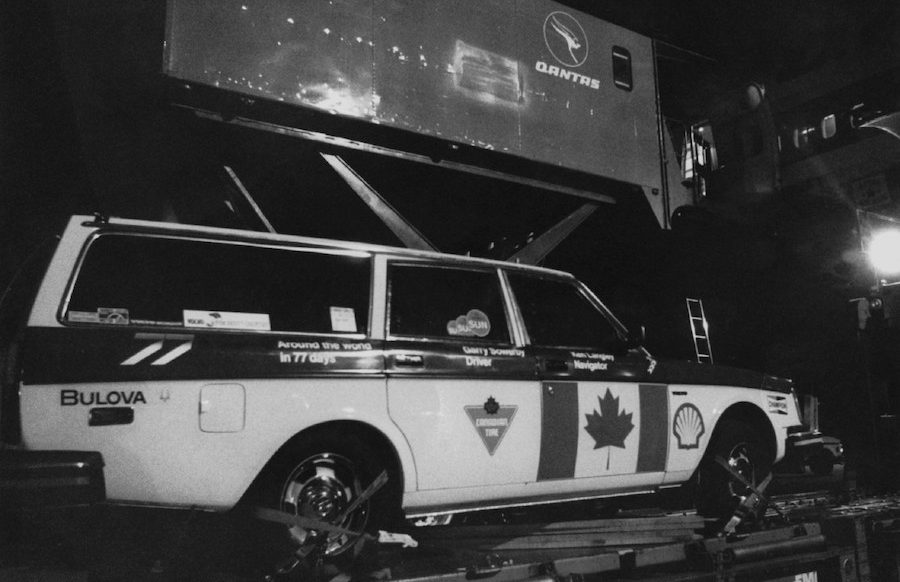 The next afternoon Ken and I boarded a commercial flight to Sydney, a 17-hour affair, including a fuel stop in Hawaii before crossing the International Date Line.

I questioned the decision to route our assault on the existing 102-day around-the-world driving record in a westerly direction. But we had agreed that shaking down our plan and giving the car a good break-in across North America was the best choice.

In Sydney, Australia, the 1980 Volvo was outfitted with a roo bar and other accessories to get it across the notorious Outback

By the time we landed in Australia’s largest city, contacts at Volvo had already cleared the car through Customs. Being well versed in preparing a vehicle to take on the Outback, they offered some suggestions.

Red Cloud would get a ‘roo bar’, a cow-catcher-inspired guard built onto its front bumper, designed to protect the front end of a vehicle during impact with a kangaroo or other animal.

Hit a Big Red kangaroo at speed without a roo bar and our vision of claiming a global speed record would be slapped down like helpless road kill.

Weight in the car had always been a concern, so we jettisoned things like the two travel trunk organizers we had searched for high and low before leaving Canada. I wonder where they are now.

A large aluminum roof rack was installed allowing better distribution of the remaining load between the front and rear wheels.

Two of three spare tires, extra fuel and the suitcases were moved as far forward as possible. We called the suitcases ‘elephant bags’ because of a TV commercial demonstrating their indestructibility by showing elephants sitting on them.

The team prepared for the roaming animals, dusty and dry conditions they would face in the blazing heart of the Australian continent

The Outback is Australia’s vast, remote interior that covers seventy per cent of the Australian continent. Inhospitable and harsh, beautiful but mostly barren, it hosts a variety of weather conditions. For the most part, during our transit, it would be dry and hot.

With a population of under 700,000 people, animals vastly outnumber humans in the Outback. There are kangaroo, dingo, ostrich and emu to watch for. The Outback is also rife with feral camels, horses, pigs, cats and dogs. Hitting an animal was a real concern.

After two days of preparation, we launched the Australia leg of the trip in front of the iconic seven-year-old Sydney Opera House. There was no Shell Helps barrier to smash through, but the Australian media and throngs of well wishers were there to send us off.

With jetlag in check and a series of solid contacts across the continent, life was good. And so was Red Cloud with its sporty roo bar and an Aussie water bag strapped to its rugged new roof rack.

I would be driving on the opposite side of the road in Australia so would be close to the ditch while Ken would be hugging the centre line during our nine-day crossing of Down Under.

Our plan was to head north 1,000 kilometres to an overnight in Brisbane. Then to Rockhampton and turn inland toward Mount Isa before continuing on to the centre of the country. 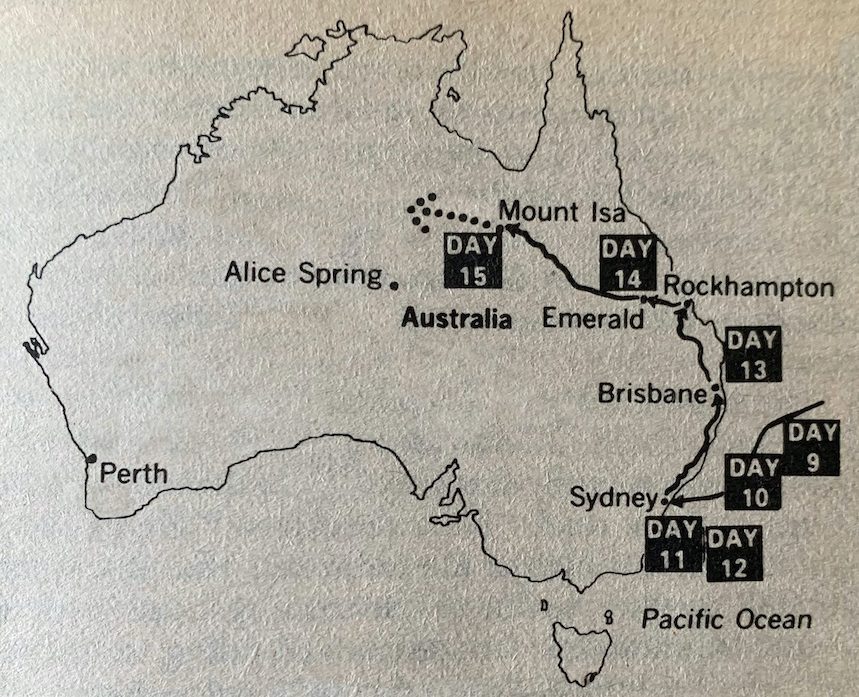 Despite lack of swift communications of today, word about the Canadians out to break a Guinness World Record travelled fast

The drive up the coast was beautiful but what really stood out were the welcomes we received from friendly Aussies wherever we stopped.

There was no internet 40 years ago and mobile communications was in its infancy. The only way people could follow us was through mainline media. Our deal with the Toronto Sun provided contacts around the world who would report our progress on a regular basis. That part of the plan was obviously working.

Ken and I had often talked about how our trip was for dreamers the world over. The term around-the-world had been around since science and discovery threw the flat earth theory out the window and we supposed most people had thought about going around it in one way or other. 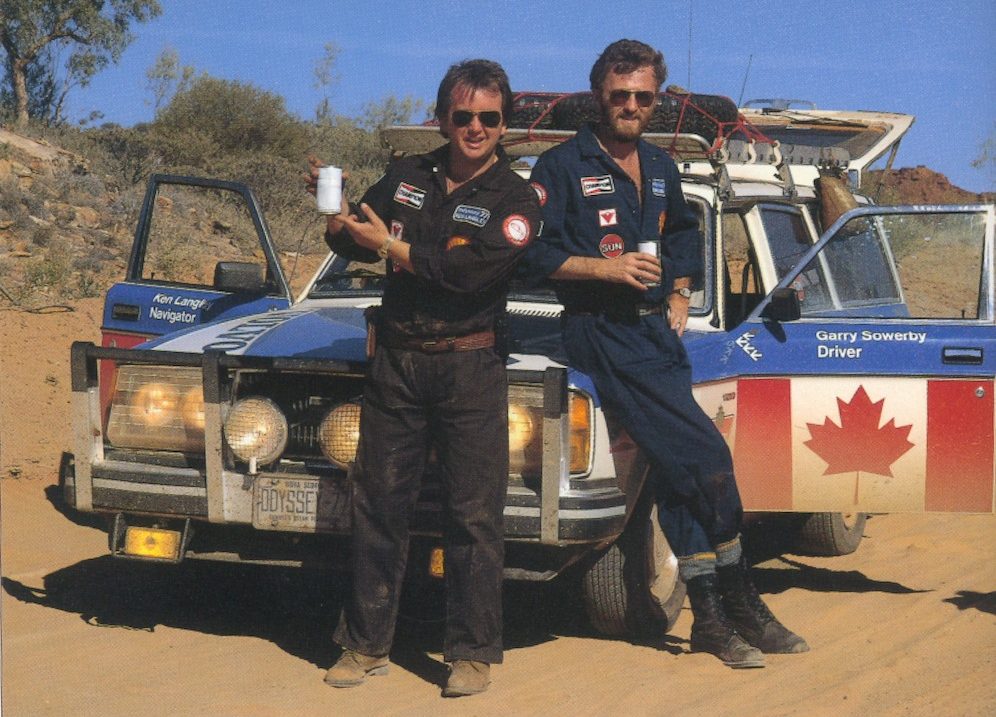 Travel logistics, border issues and PR were not easy to arrange in the days before emails, and even faxes

Ken and I did the guts and glory part while matters regarding shipping, diplomatic issues and press activities were handled by Sandy Huntley, and home office manager, Al McPhail, communicating through teletype, or teleprinter, a precursor to the computer. 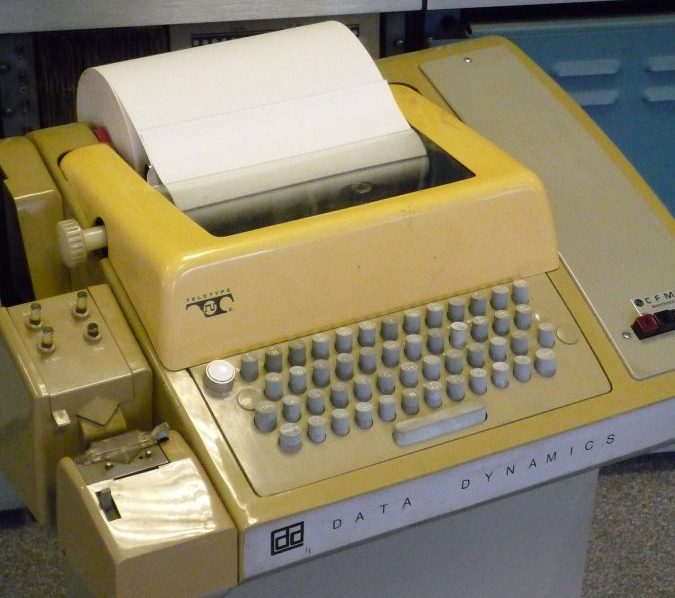 The plan we had developed had us stopping every night in a decent hotel. At the end of each day, Sandy, keeping ahead of us on commercial airlines, would try to call us at each hotel to bring us up to speed on the schedule, the press conferences and any changes.

Everywhere we stopped, someone knew us. Of course they all had advice and many knew someone who had a relative or friend of a friend that had been to Nova Scotia once. Fellowship fuels the soul and that day, getting used to driving on the other side of the road, that 18-speaker sound system rocked us up to Rockhampton. Road trip at its finest. 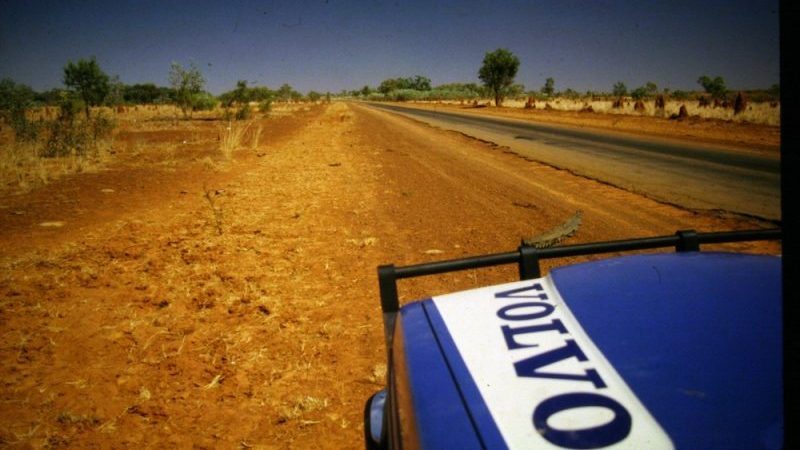 At Rockhampton, we turned inland toward Mount Isa on what looked like a two-lane country road. Sandy and a Volvo rep followed us for about 100 kilometres, then turned back.

He would return to Sydney, meet with a film crew arriving from Toronto, then fly with them to Alice Springs in the centre of the country to meet us.

The two-lane road deteriorated to a one-lane track to Emerald where we spent the night in a roadside motel.

When the pavement suddenly ended on the narrow track, we knew we were in the Outback

The next day, the motel owner gave us six small sapphires as good luck pieces. We were back on the narrow paved track toward Mount Isa, 1,000 kilometres west . Halfway there, the pavement ended. There was no Las Vegas sign touting our arrival in the Outback but from the dust and desolation we knew we were there.

During a drive break, Ken spotted a dried-out cattle skull between two ant hills taller than him. He attached it to the top of the roo bar like a bizarre hood ornament. It would guide our way, and act as a talisman of sorts.

On that stretch, we saw only two slow-moving trucks and a silver Rolls Royce, of all things. It was moving fast, throwing up stones and massive plumes of dust. One of the rocks hit the windshield, leaving a crack below the driver side windshield wiper. It was the first of seven places the windshield would be broken during the trip.

At midnight, we pulled into Mount Isa. It had been a long day on the one-lane track of rutted gravel and dust like I’d never seen.

As usual, we checked into separate rooms at the hotel, holding to our theory that, after being trapped in a car for so many hours, we would recharge in our own rooms.

As I lay in bed, vibrating from the hot, dusty 15-hour drive, the reality of what we were up against weighed on my mind. We had driven across North America plus 3,000 kilometres in Australia.

But now, we were barely into the drive across one of the world’s largest remaining intact natural areas and one of the harshest on Earth. There was no turning around. 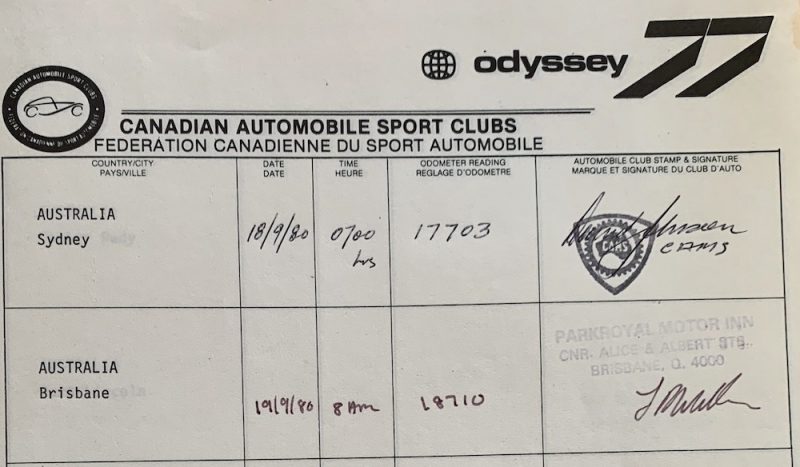