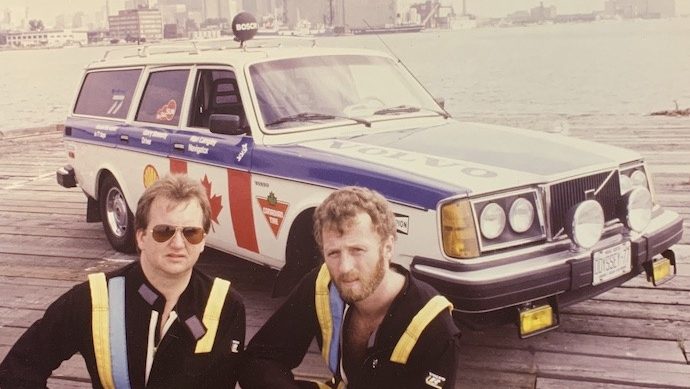 Garry Sowerby brings us along, in the 1980 Volvo, dubbed Red Cloud, as he and Ken Langley attempt to set a Guinness Record for Fastest Circumnavigation of the World by Car, exactly 40 years ago.

*Read the first instalment in this series, here.

It was over in an instant. Behind us, tears and hugs from family and friends and handshakes from nervous business contacts. Excited waves and farewells from curious onlookers gathered at the Shell Helps paper barrier we had just crashed through, filled the rear view mirrors.

I pulled onto Toronto’s Gardner Expressway then wound our way to Highway 400 and out of the city. I watched the four-year-old CN Tower slowly shrinking behind us as we motored north.

It would the last time we’d see it for almost 11 weeks.

Press cars tagged along for a while, capturing footage of ‘The Boys from the Maritimes’ first minutes on the road. Then we were alone, just another car headed toward Muskoka’s cottage county.

But the car we were driving was plastered with corporate logos, two massive Canadian flag decals and signage on the side that read ‘Around the world in 77 Days’.

A small logo at the top of the front doors represented our company, Odyssey International Limited. It was comprised of five small arrows that formed a bigger arrow. Four were blue, one was gold and they all pointed straight ahead, wherever we and our freshly minted Volvo 245DL was headed. 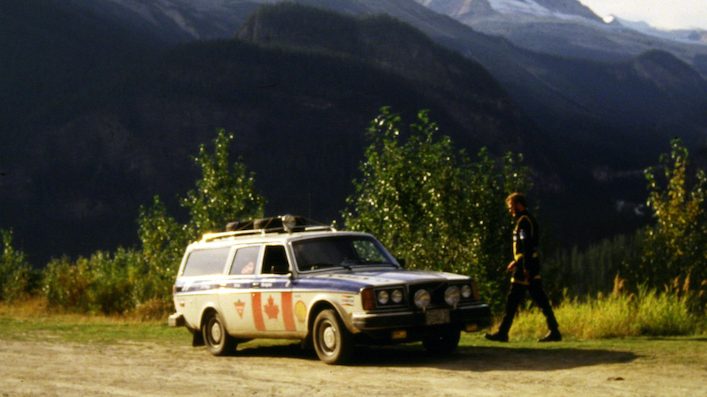 Despite having the latest in communications (of forty years ago) in the vehicle, the team was unreachable within 50 km of leaving Toronto

There were no cellphones 40 years ago. Motorola had installed the latest in mobile communications though, an IMTS phone system. Its transmitter, bolted to the floor in the cargo area, weighed 13 kilograms. Although we knew it wouldn’t work 50 kilometres out of Toronto, the handset was a techie touch, up on the dash. 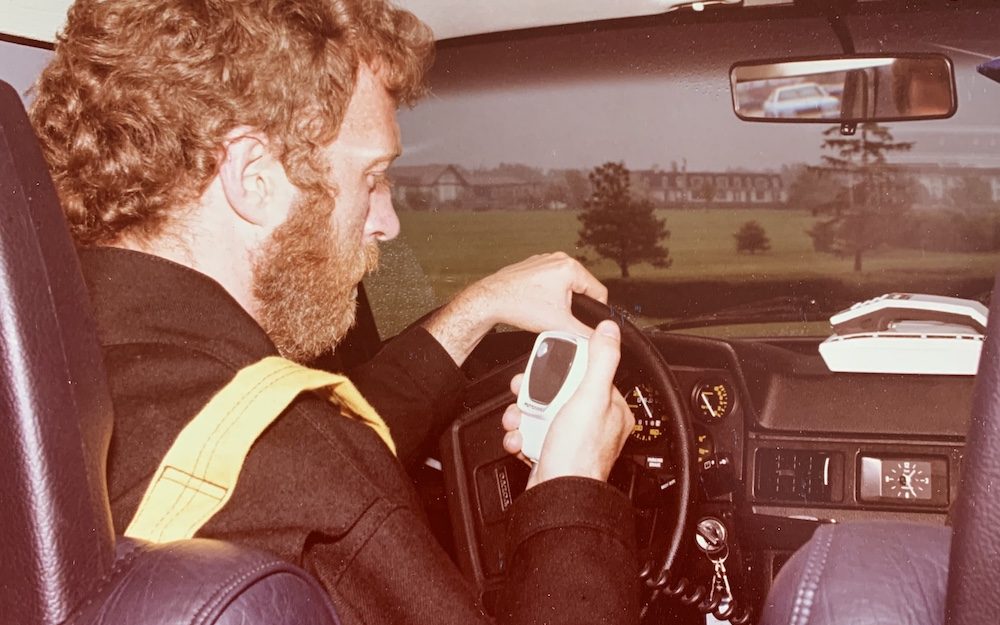 When the ‘no reception’ light flashed, Ken and I smiled. We were finally on our own. Excited but exhausted from the preparations, parties and emotion related to strapping on two ton of car, equipment and optimism and saying so long to so many.

Ken rummaged through a bag shaped like a giant roll of Lifesaver candies someone had thrown in the window before we left. It was full of cassette tapes.

I flipped the overdrive switch and settled into sheepskin seat covers that were supposed to keep our butts healthy. All we had to do now was what we had been promising we would do for the past three years.

I would drive and Ken would navigate us around the world in record time.

As we motored north to Sudbury, then west to our first stop at the Water Tower Inn in Sault Ste. Marie, the load in the car became obvious.

Three spare tires, parts, tools, promotional materials, including a case of tacky CN Tower models, ten gallons of extra fuel and safety equipment were all part of the roulette guessing-game of what might be needed to get us around the planet.

The Volvo had been modified somewhat to prepare for its mission. Springs and shock absorbers had been replaced with heavier components used on Volvo vehicles shipped to Africa and South America.

Robert Bosch had provided enough lighting to illuminate an airfield (don’t mess with us with your paltry high beams) and the instrument panel was swapped with a ‘rally’ unit that replaced warning lights with analog gauges.

The odometer, which needed to wind up more than an equator length of kilometres, and the clock that would never stop ticking no matter what we were doing, were clearly visible to both of us.

The choice of Volvo, with a tough, simple engine that could run on regular fuel made sense for an around-the-world drive

We chose Volvo’s base B21-A, a four-cylinder engine, fitted with a single-side draft carburetor, because it would run on regular or unleaded fuel, which was just coming into use in parts of the world. But, with only 106 horsepower, we had had the power steering and air conditioning systems removed to reduce weight and provide more power to the drive wheels.

The route could have followed an eastern or western direction. We chose west. That way, even though a day would be lost crossing the International Date Line, there were twenty-four 25-hour days rather that as many 23-hour days. In the haze of planning, that seemed better for some reason. 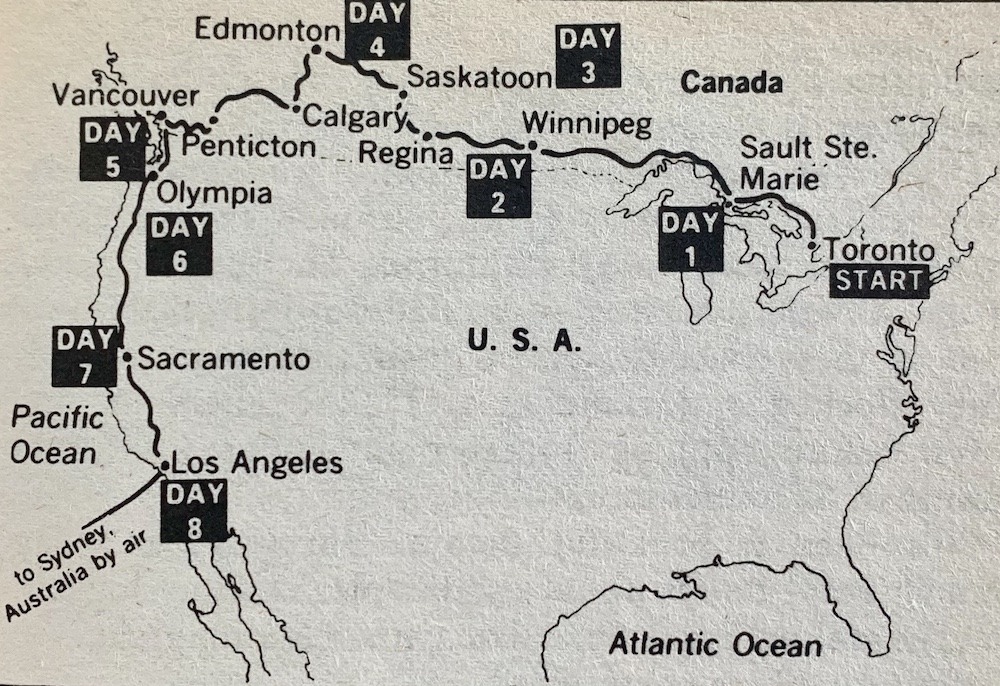 According to the plan, we would arrive in Los Angeles on Day 8. I was only 30 but had already driven across Canada many times and to Los Angeles twice, so the map was in my head.

Week 1 would be a chance to get into the swing of it, test our plan and relax before heading into the unknown on the other side of the world. That is, if driving a manual transmission car with no cruise control and no air conditioning across the continent with the windows down, an 18-speaker sound system blasting out hits of the ‘70s while fine-tuning a project with so many variants, could be considered relaxing.

By the time we hit the Saskatchewan-Alberta border, the financial reality of what we were up against set in.

There was money in the bank for Al McPhail to pay for shipping over the oceans and to run the home office back in Toronto.

Ken and I and advance man, Sandy Huntley, each had $3,000 U.S. in cash but it became obvious we would have to rely on our three-day-old American Express cards to cover the last month of the trip.

Our reputations were on the line. We had convinced sponsors and the gaggle of shareholders not only that supporting the adventure was a good idea, but that we were the guys to do it.

The commitment weighed on us, especially having heard the parting words from Jim Fitzhenry, the President of Volvo Canada, to his PR man, Ken Barrett: “If this thing f**ks up, we’ll be driving pogo sticks.”

Failure was not an option.

Techie advantages of road tripping today weren’t available because they had yet to be invented. There was no GPS and mobile communication was limited to the odd scratchy call within a few kilometres of major North American cities.

Laptop computers, fax machines, and even the Internet, did not exist.

Through the long days on the road, there was nothing to do but drive, work on the plan and figure out what to say at the next press meeting. The hours flew by.

Then he patted the dash and added, “Come on, Red Cloud”.

Friend and Canadian Press reporter, Gerry McNeil, had suggested we name the Volvo, Red Cloud, after a North American Lakota leader who continually fought for his people in the early 19th century.

It didn’t make any sense to call a blue and white car Red Cloud, so, at the time, we laughed it off.

From that moment, heading into the Rocky Mountains, the Volvo became Red Cloud. Ken’s father repeatedly and mistakenly called it Big Cloud, quipping, “Well, it was a big cloud over my head!”.

Goodbye, Canada, and your safe, friendly ways. Next stop, the world.

On Day 6, we crossed the border into the U.S., south of Vancouver. A friendly officer posted the first stamps in our passports and took a cursory look inside Red Cloud.

After what seemed like a boy scout trip across the country, meeting mayors and celebrities, posing for pictures and hours of evening phone calls to report on our trip and prepare for the road ahead, it was, finally, goodbye Canada. 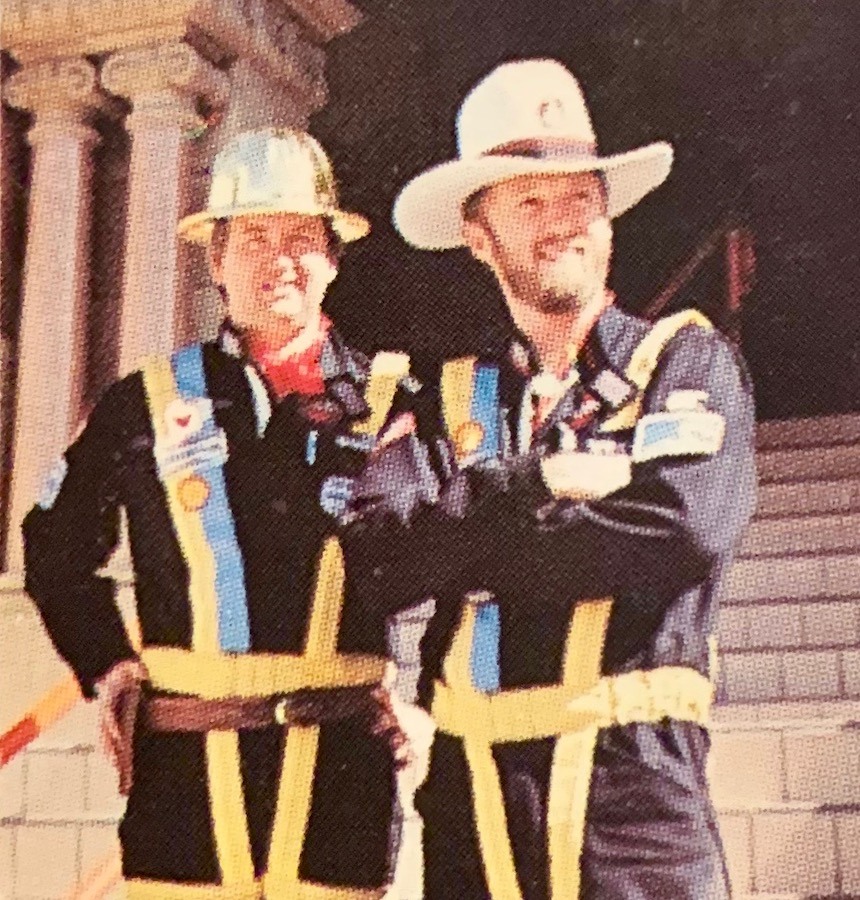 Heading south, we thought about what was coming up. The Australian Outback, India, Pakistan, Afghanistan, Iraq, Turkey, the East Bloc and Europe were obviously anxiously awaiting the day Red Cloud and the two yokels from the Maritimes would roll on through.

First, we had to make it to Los Angeles International Airport in time to strap Red Cloud to a metal pallet and load it onto a Pan Am Boeing 747 air freighter.

Next week, things would be different. Guaranteed.

*Continue driving around the world with Garry and Ken in a 1980 Volvo.

Week 1: Toronto to Los Angeles,click here. (You are here)