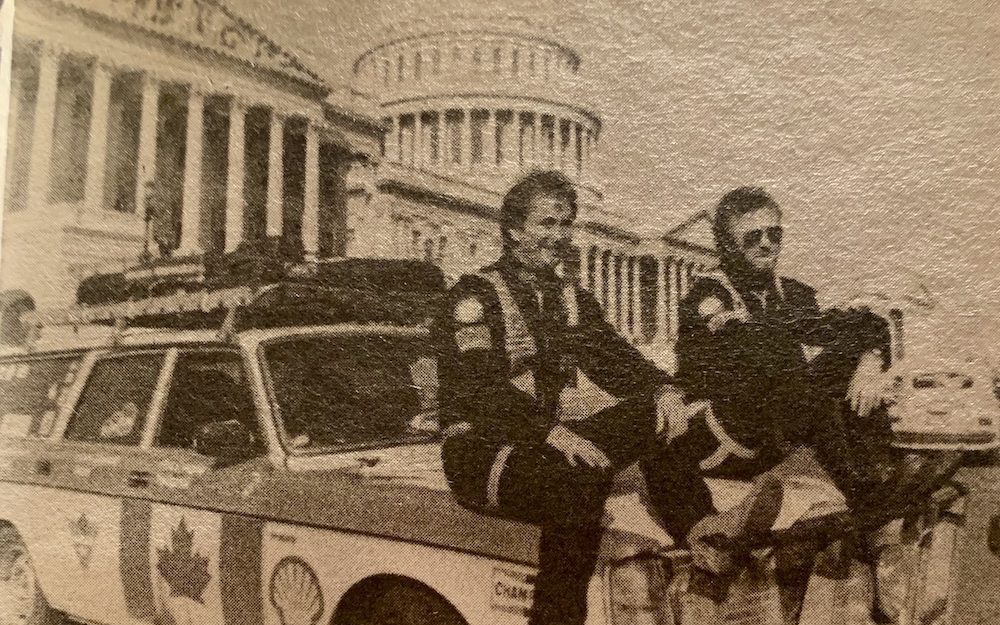 Driving around the World – Week 10: Houston to Moncton, New Brunswick

Driving Around the World – Week 10: Forty years ago this week, Garry Sowerby and Ken Langley were mere days away from clinching the Guinness around-the-world driving record in Red Cloud, their 1980 Volvo 245 DL. This week, as the boys finally return to North America, insomnia continues to plague Garry. As they head into the home stretch, how about running out of gas for some excitement?

Through a series of short naps I managed about two hours of sleep. It wasn’t much and it was only 2:30 in the morning.

But after three sleepless nights in Paris, London and Gatwick, the short escape from reality had been like a two-week vacation.

In a few hours, Day 66 of our attempt to drive around the world in 77 days or less would rev up.

Ken Langley, advance man, Sandy Huntley, and I had landed in Houston, Texas the evening before from England on a British Caledonia DC-10. Red Cloud, our 1980 245 DL Volvo station wagon, had been strapped to a metal pallet in the big jet’s cargo hold.

Although we had cleared into the United States without problem, the car had to be inspected by officers from the U.S. Department of Agriculture, who didn’t like the road grime on the car. They would release the car to us the next morning, only after a steam cleaning.

After hours of pacing the hotel room floor, the sun finally surfaced. Then, while Ken sorted through messages from the media, Sandy and I took a cab to the airport and coaxed Red Cloud out of the hands of Uncle Sam.

Finally, after 36,180 kilometres and 65 days on the roads of 23 countries, I was driving in North America.

The first stop was a Motorola Radio Shop where technicians reprogrammed Red Cloud’s then state-of-the-art, but cumbersome, IMTS mobile phone. Although conversations were plagued with dropped calls and static and were nothing like today’s cell phones, we would be able to communicate.

The outside world would join our insular life for the drive from Texas to Nova Scotia, then on to the finish line at Toronto’s CN Tower. 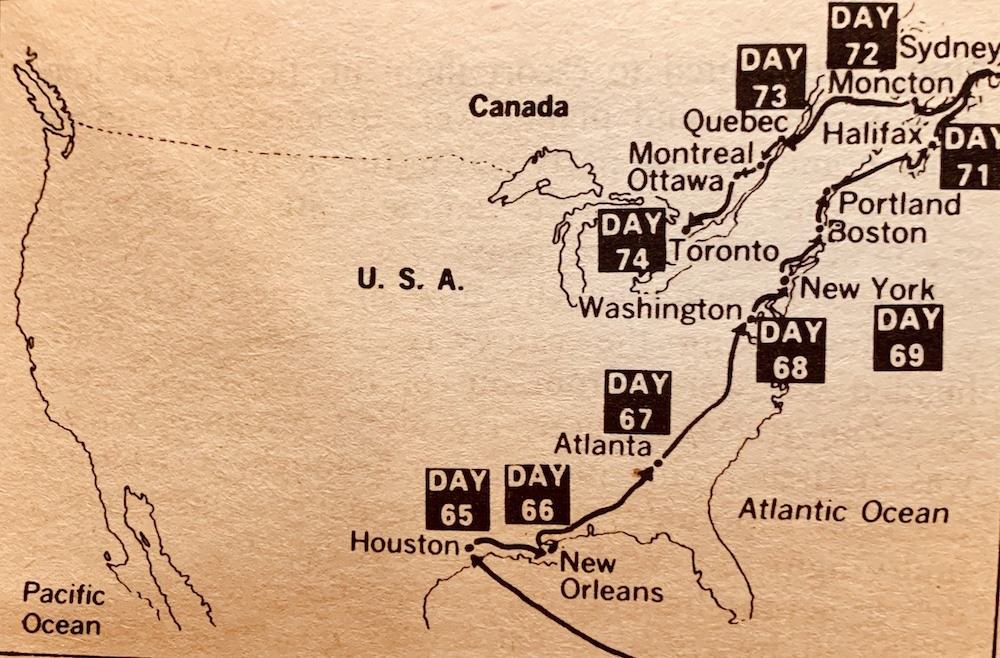 The next stop was a medical clinic so a doctor could check me over. The time off driving since leaving Europe had done wonders for my throttle leg knee pains, but my sleepless state continued to hound my confidence.

As far as the lanky Texan doctor was concerned, I was fine. When he announced, “You need some sleep,” I laughed out loud at the understatement. He gave me three black pills, big shiny ones, the size of June bugs. I was to take one before bed for the next three nights and my system would ‘reset’, whatever that meant.

But first, we had to get to New Orleans.

We set off from Houston, fuelled by the euphoria of beginning the last leg of the circumnavigation attempt. During the 575-kilometre drive, I concentrated on not making a driving mistake while Ken worked through the ballooning list of media trying to get hold of us.

After checking into a hotel in the French Quarter, I passed on the music scene, downed June bug #1 and drifted into a corpse-like nine-hour sleep.

Driving to Atlanta the next day, Ken worked the phone, calling all of our friends, collect. Between outgoing calls, the media kept ringing so the cockpit of Red Cloud was a busy place.

Of course, the attention was grand for the ego but there was something else at the back of our minds. Our corporate sponsors were not charities. Positive product exposure was the reason they got into this game in the first place. Nothing in life is free so the media attention we were getting was payback for them.

The boys from the Maritimes were both feeling good.

Ken’s stomach problems were behind him. My knee was pain-free and I had two more June bugs to sort out the sleeping issues. Now, we would be in touch with the world until the CN Tower, and the finish line, filled Red Cloud’s windshield.

On the 1,050-kilometre drive from New Orleans to Atlanta, we stopped only for fuel and once at a phone booth outside Tallahassee, Florida to call Barbara Frum at CBC’s As It Happens radio show. We wanted a clear telephone line to talk to Canada.

We made our way through Washington D.C., New York and Boston, amid a blur of media interviews and on-the-fly photo ops with TV crews and reporters. Everyone wanted to see what two men trapped in a Volvo for two and a half months looked like.

Having been completely consumed by our task, we realized how out of touch we were.

While we were driving around the world, the Rubik’s Cube had been unleashed on the public, to become the world’s top-selling puzzle; CNN, the first television channel to provide 24-hour news coverage, had launched, and Bob and Doug Mckenzie, two fictitious beer-swilling, kind-of-stupid Canadian characters had become hoser heroes of comedy television, both in Canada and the U.S.

We entered Canada on a ferry boat from Portland, Maine to Yarmouth, Nova Scotia. The Captain announced we were on board so most of the crossing was spent holding adventure court with fellow passengers.

A friendly Customs and Immigration officer in Yarmouth cleared us into Canada as if we had been to Boston for a Red Sox game.

On the drive to Halifax, I appreciated what Red Cloud had done. Although heavy with not much power or creature comforts, the car had been predictable, solid and tough.

It hadn’t let us down once. Except when it sputtered to a stop with two media cars in tow a half-hour outside of Halifax.

I’d been so excited to be back in Nova Scotia, I had let the gas tank run dry. Red Cloud was out of fuel for the first time. No big deal though. There were lots of laughs over the incident and more the next day when the photo of us refuelling Red Cloud from a gerry can on the side of the road went global on the United Press International wire service.

In Halifax, we were swamped with love and attention. Offers to celebrate and party came from all directions; friends, relatives and the 50 shareholders who, three years earlier, had coughed up the first $25,000 for us to pull the plan together.

It was the same in our hometowns of Sydney, Cape Breton and Moncton, New Brunswick. Our parents wept with joy, while parties surfaced at every stop, parties we briefly started but never ended.

We couldn’t let our guard down until we reached Toronto.