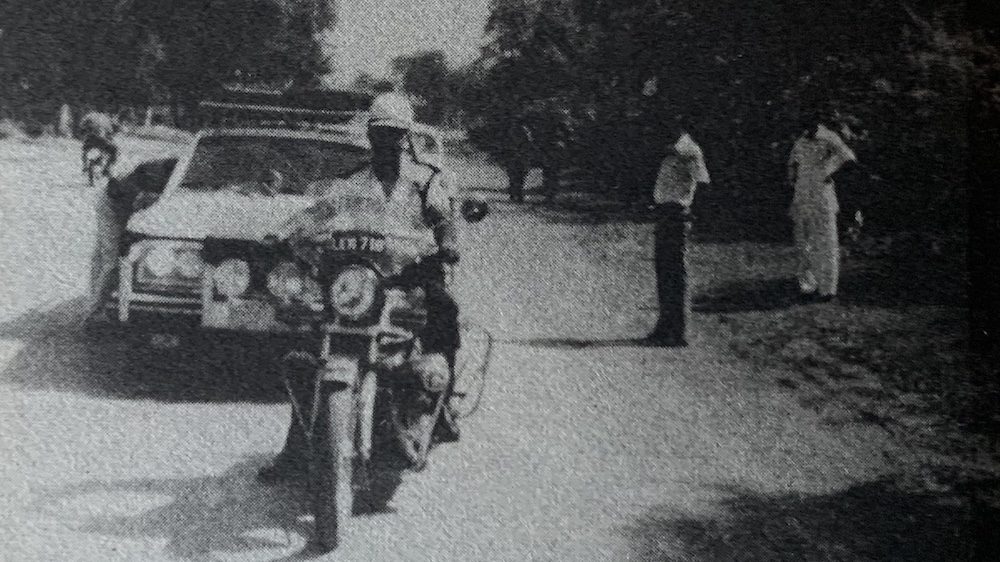 Driving Around the World – Week 6: Lahore, Pakistan to Belgrade, Yugoslavia

Driving Around the World – Week 6 – Forty years ago this month, Garry Sowerby and Ken Langley were attempting to break the Guinness around-the-world driving record in Red Cloud, their 1980 Volvo 245 DL. Today, Garry and Ken say goodbye to the Indian subcontinent and enter the communist states of the Eastern Bloc.

We didn’t know what the Police Chief of Lahore, Pakistan wanted to talk to us about that morning forty years ago.

“We will make it easy for you through a series of police escorts along the way,” he assured us. “In Multan and Sukkur, the mayors will be hosting a reception for you.”

It was 1,210 kilometres to Karachi, Pakistan’s largest city and the seaport for both Pakistan and Afghanistan. At the airport there, we would rendezvous with a Boeing 707 cargo plane to lift us and Red Cloud over the 1980 version of the Iran-Iraq war.

So, with sirens blaring, the traffic parted and that continued for much of the three day drive south to the Arabian Sea.

Through towns and villages, people lined the streets, waving and cheering. Hundreds of school children in crisp school uniforms waved small Pakistani and even some Canadian flags.

After a week battling the congestion and confusion of driving in India, this was like a fantasy. It was one of the proudest times of my life. We were making people happy.

We had been on the road for almost six weeks since leaving Toronto and were about to say goodbye to the Indian subcontinent. 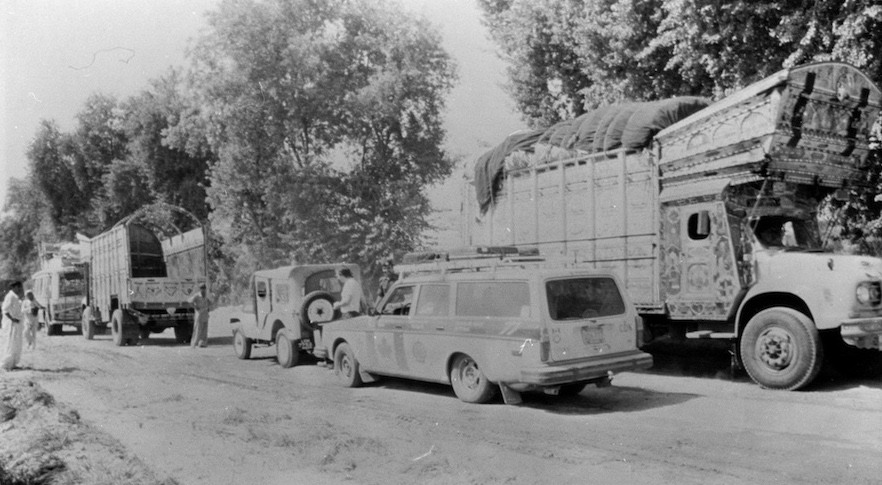 Whether we ended up beating the around the world speed record or not, how could life ever be the same?

In Multan that evening, we attended a civic reception in our honour. The city council, business people and local citizens were there to welcome us and share stories. Children played. It was a festive affair.

In front of the hotel, curious onlookers checked out Red Cloud. Some just wanted to touch it. Others stood back and stared as if the space shuttle had landed in the town square.

The next night, after another day of being treated like alien royalty by our police escorts, we reached Sukkur, on the banks of the Indus River. A message at the hotel confirmed the Lufthansa flight was still scheduled for the Karachi rendezvous. They had secured landing rights in Athens, Greece, after trying Turkey and Syria, who both quoted exorbitant landing fees.

We would soon be heading into the Eastern Bloc, the bastion of red tape, with a bank account in the red. First, we had to get to Karachi though.

There were no police escorts on the 10-hour drive between Sukkur and Karachi. From 100 kilometres out, traffic slowed to a crawl through road construction and chaos.

With the windows always down, we were filthy but felt a sense of accomplishment. We had solved a major logistical problem thrown our way, thanks to war in Iran and Iraq. Montezuma’s revenge was in remission. The itch of Ken’s 42 bed bug bites was fading.

What could go wrong now?

We found accommodations near Karachi’s Jinnah International Airport. It wasn’t much, a strip of rooms with a dusty, potholed parking lot. The stained interior walls were uninviting. The bathroom reeked.

Between the humidity, heat and noisy aircraft, I didn’t get much sleep.

The next morning Ken woke with bowels on fire. Another bout of dysentery was just the party pooper neither of us wanted, especially on a cargo plane with questionable toilet facilities.

We drove to the cargo terminal. Since Ken and I would be travelling on an aircraft configured strictly for freight, additional documentation was required for us to exit Pakistan as ‘special couriers’.

The ‘what-ifs’ disappeared about noon when the bright orange Boeing 707 taxied up to the hanger. The German pilots looked remarkably tidy in the shabby cargo office.

“How will you be paying for this?” the Captain, a burly man with a handlebar moustache, asked. He seemed more interested in getting back to Frankfurt for happy hour than what we were up to.

I fumbled for my wallet and produced an American Express card.

“Aaah, that will be fine,” he offered, then asked the office manager to charge $18,000 U.S. onto the already-warped card. 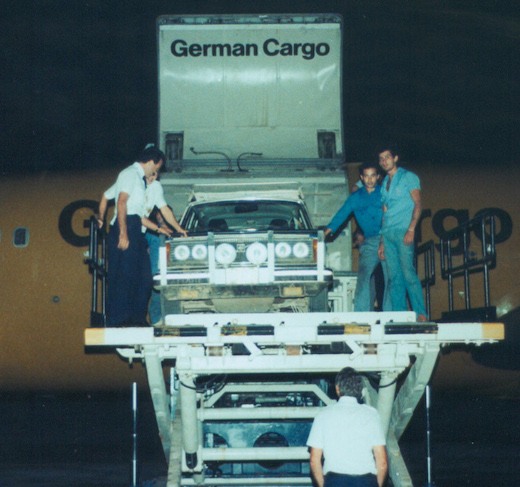 For the next hour, we watched the car being loaded onto the aircraft. The Captain briefed us on emergency procedures in case something went haywire during the flight.

In the cramped cargo hold of the airplane while flying over the war, delirium sets in

Since one our two ‘courier’ seats was beside the entry door, he paid particular attention to the door’s operation.

Once inside it became obvious how cramped the flight would be. Red Cloud was strapped down ahead of palates of carpets leaving little room between its grill and the back of the cockpit door. It seemed an edgy place in which to fly over a war. 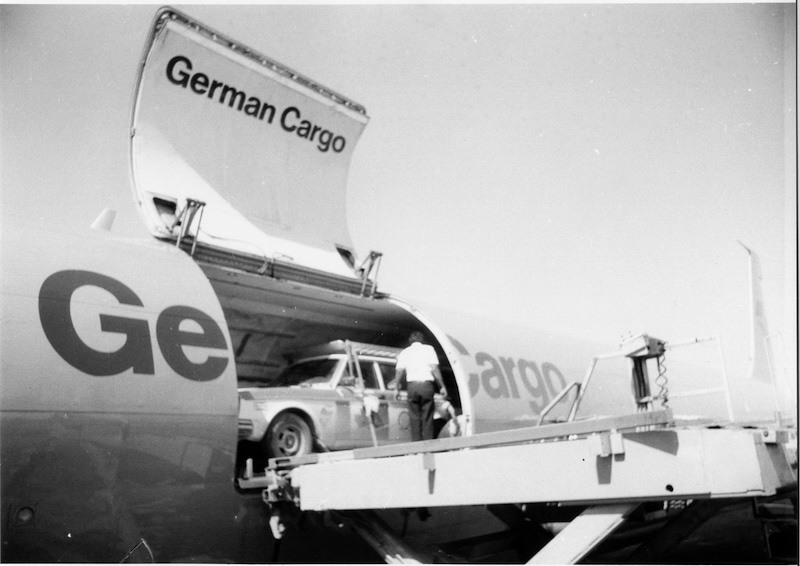 Ken took the seat by the entry door hoping for sleep. I strapped into the jump seat at the back of the cockpit. The windscreen offered a sprawling view between the pilot and co-pilot. With headphones, I could hear what was going on between the crew and the tower.

“It’s hot and we are heavy, we will need every inch (of runway) we can get,” the Captain remarked after being cleared for take-off.

On the climb out, Karachi faded into the hot, humid haze of the subcontinent, while an endless stretch of the Arabian Sea pounded the shoreline. We levelled off at 38,000 feet and flew just off the south coast of Iran.

On the horizon, smoke from the Abadan oil refinery, that had been bombed a few days earlier, spiralled high into the stratosphere.

I was preoccupied with the chatter from our Abu Dhabi-based air traffic controllers, when Ken tapped me on the shoulder. He looked pale, scared.

“You gotta club me, Sowerby, put me out. I’m really shaky and it’s getting claustrophobic back there.” Sweat was pouring off his forehead into his eyes.

“I’ve got this fascination with the exit door.”

He looked crazed. “Can’t get my mind off of it. Whenever I close my eyes I hear that song Don’t Fence Me In sounding like it’s coming from a cheap megaphone. Out the window all my relatives are marching around to the beat of it.”

This didn’t sound good. Ken was obviously in a state of delirium and I wasn’t keen to leave him alone back there with the door.

I thought about telling the Captain, but figured news of Ken’s fixation on the door wouldn’t go over very well.

“Er, excuse me, Captain. Do you have a monkey wrench so I can club Ken to curb his fascination with that door you showed us how to operate?”

Far off in the distance, I could faintly make out the mountains of Lebanon. We were following pipelines stretching for hundreds of kilometres across the deserts of Saudi Arabia.

Once we reached those mountains, surely all would be well with our dream to drive around the world in record time.

Get it done and we just might make enough money with follow-up shows and advertising royalties to pay for the flight and whatever else it cost to finish the trip.

But what about Kenny? I went back to the cargo area, fished a rope out of Red Cloud and tied him to his seat, cowboy style. He was cooperative, but we had to get through a few bouts of the giddies in the process.

I covered him with a blanket so the pilots wouldn’t see the rope, then watched him drift off to sleep.

Back in the cockpit, I hoped the knots would hold. We were over Lebanon about to head across the Mediterranean Sea.

I untied Ken before landing. The terror of the flight had given way to bouts of laughter that we still break into today when we talk about ‘the voyage of the delirious’.

Landing in Athens, Greece, next on the agenda was the drive through the communist states of Eastern Europe

Advance man, Sandy Huntley, was at the Athens Airport when we arrived.

The following morning we were briefed by staff at the Canadian Embassy while Red Cloud got checked over at a local Volvo dealership. Then we drove north through Greece toward Bulgaria.

Bulgaria was our first communist country, but slipping behind the Iron Curtain was surprisingly quick. With lack of any advertising, thousands of troops on the move and its monochromatic, drabby towns and villages, crossing the communist country was an eye opener.

Ken’s health was getting worse. He was passing blood and, although keeping a stiff upper lip, I knew he was miserable. I admired his perseverance. I felt good, on the other hand. It seemed whenever one went down the other would rise to the occasion.

Ken made a pledge. If his health didn’t improve by the time we got to Sweden, he would check himself into a hospital. Aside from whatever delay that would cause, we knew that scenario could be the end of the trip.

Our week ended in Belgrade, capital of then-Yugoslavia, on October 15, 1980. Hotels were booked due to a UNESCO conference, but Chuck Svoboda, an officer of the Canadian Embassy, offered to put us up at his home.

We drove Red Cloud to dinner that night at the Writer’s Club, a privately-owned favourite meeting place of the city’s intellectuals.

At dinner with Chuck and his wife, Lisa, we discussed life in a communist country. He briefed us on what to expect getting through Hungary, Czechoslovakia and East Germany.

Red Cloud had been parked in front of the club. After dinner, as I approached the car, I noticed a boot print on the big Canadian flag decal on one of the front doors.

The door was dented a bit from what was obviously a kick in the flag.

Thanks, comrade, for the classy welcome to the Eastern Bloc.