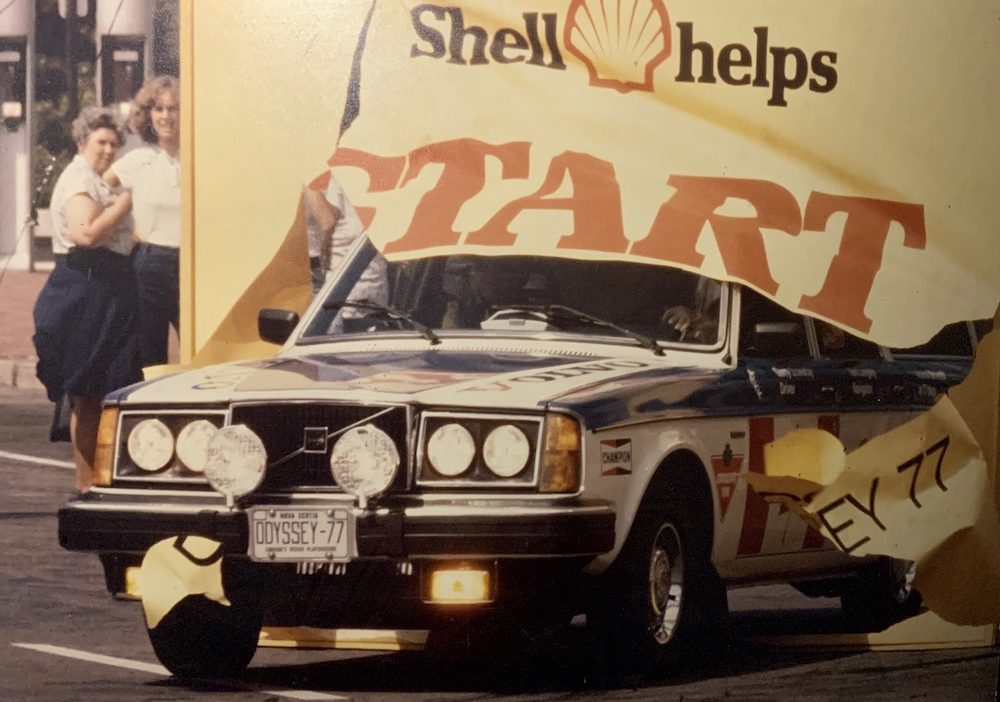 Forty years ago today, September 6, 1980, Garry Sowerby and Ken Langley, two young Canadian men from the Maritimes, set off from Toronto’s CN Tower in pursuit of a Guinness World Record for fastest circumnavigation of the world by car. It took them three years to reach the start line.

It was hot zipped into the Volvo R-Sport coverall-style racing suit. The suit had built-in pull-straps on both the shoulders and legs to haul a driver out of a burning wreck. Beads of brow sweat dripped into my eyes. A nervous knot held tight in my stomach.

The crowd, a few hundred souls, were as fixated on us as I was on the white wall rising 40 metres in front of me.

I turned the key in the ignition. The tachometer settled at a smooth 800-rpm idle. 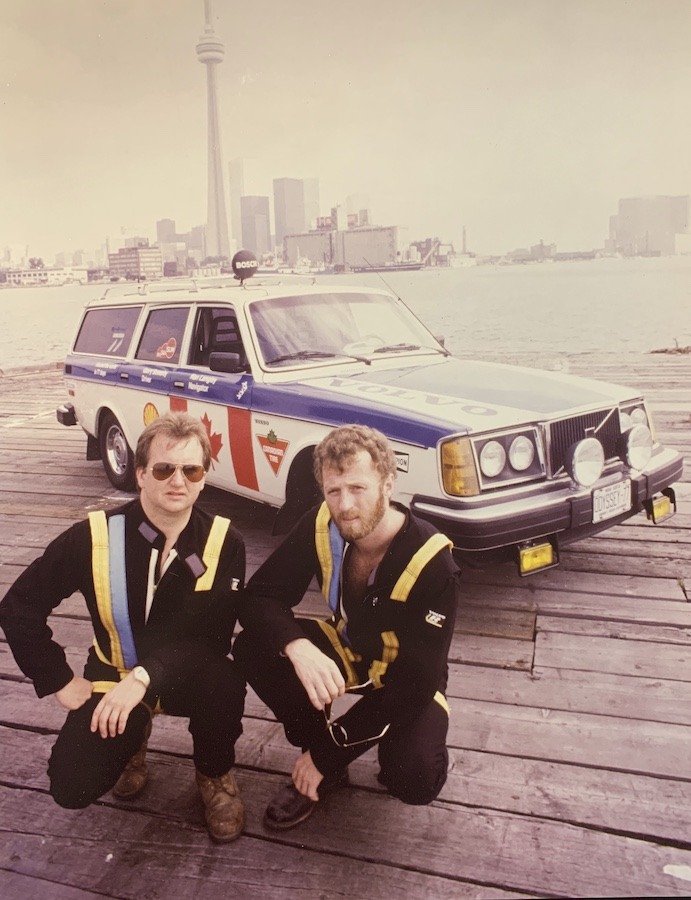 Forty years ago today, the timing clock struck two o’clock. It seems like yesterday. I tapped the horn twice, eased the clutch out and floored the accelerator steering straight for the white wall.

The crowd, many who had made the trek from the Maritimes to see us off, was still cheering three seconds later when we hit the white wall and crashed through the paper barrier, emblazoned with the words ‘Shell Helps’.

The whole world was on the other side of the barrier. The world was where we were going.

Time would be our enemy for the next two and a half months.

Business partner and navigator, Ken Langley, and I would drive our Halifax-built Volvo 245 DL station wagon, nicknamed Red Cloud, around the world and hopefully into the Guinness Book of World Records.

The drive had actually started long before the crowd gathered at the base of Toronto’s CN Tower that sunny afternoon on September 6, 1980, to witness two intrepid 30-year-olds, from Nova Scotia and New Brunswick, take on a challenge that would change their lives forever.

The idea had surfaced three years earlier on an all-night road trip from Ottawa to Halifax, when a rambling discussion lead to the question of the ultimate road trip.

By the time the sun rose, as we motored south along New Brunswick’s Saint John River Valley, Ken and I were wallowing in a dream to drive around the world. We would take my 1972 BMW 2002 on the voyage. No problem. 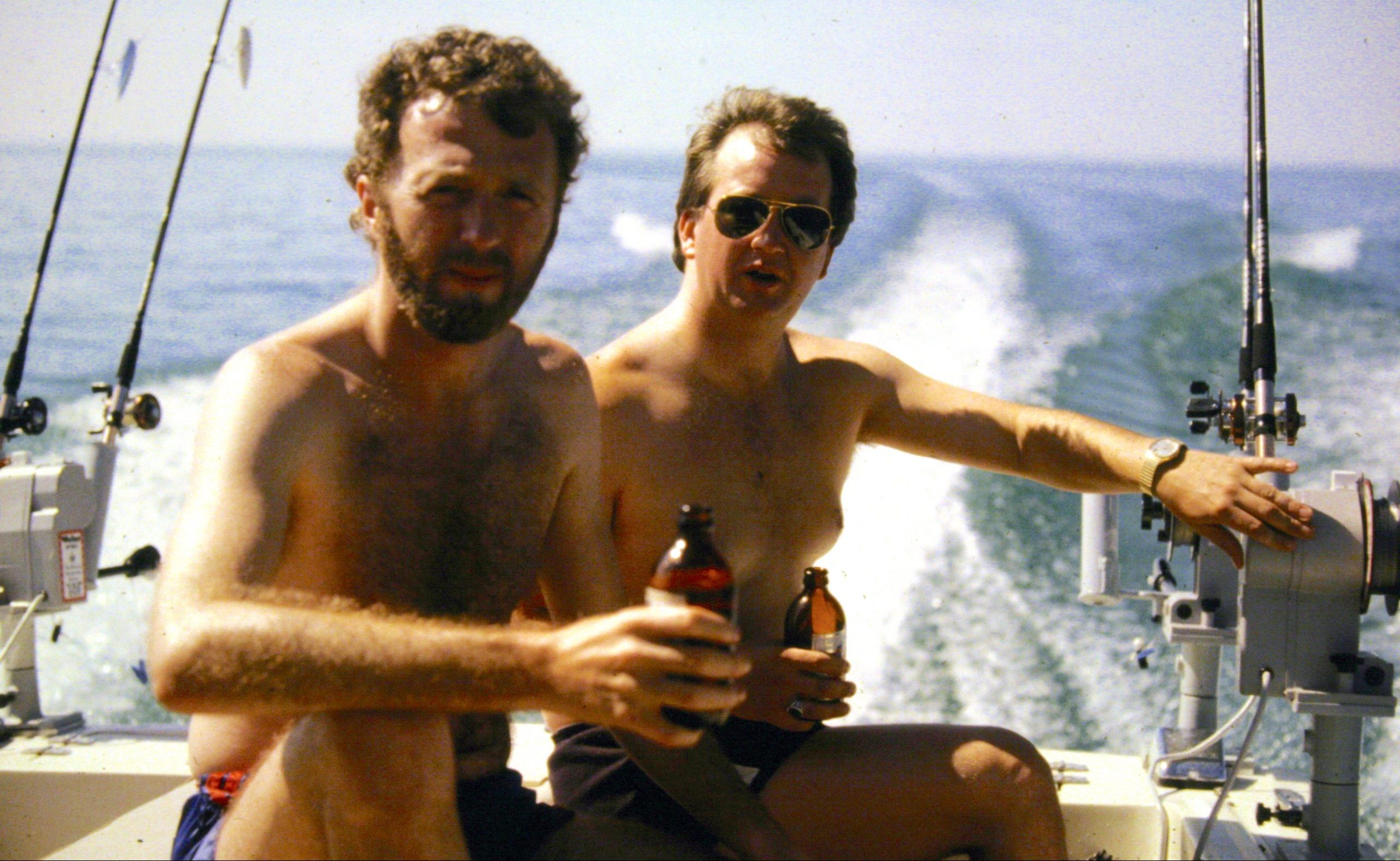 Neither of us had ever heard of anyone driving around the world. The notion of getting a Guinness World Record for our accomplishment had also emerged.

At the time, I was a Captain in the Canadian Armed Forces. Ken worked on Parliament Hill in Ottawa as executive assistant to a Member of Parliament.

It became obvious we would have to quit our jobs to pursue the endeavour. We figured by draining our savings and cashing in pension contributions, we could finance the boondoggle. 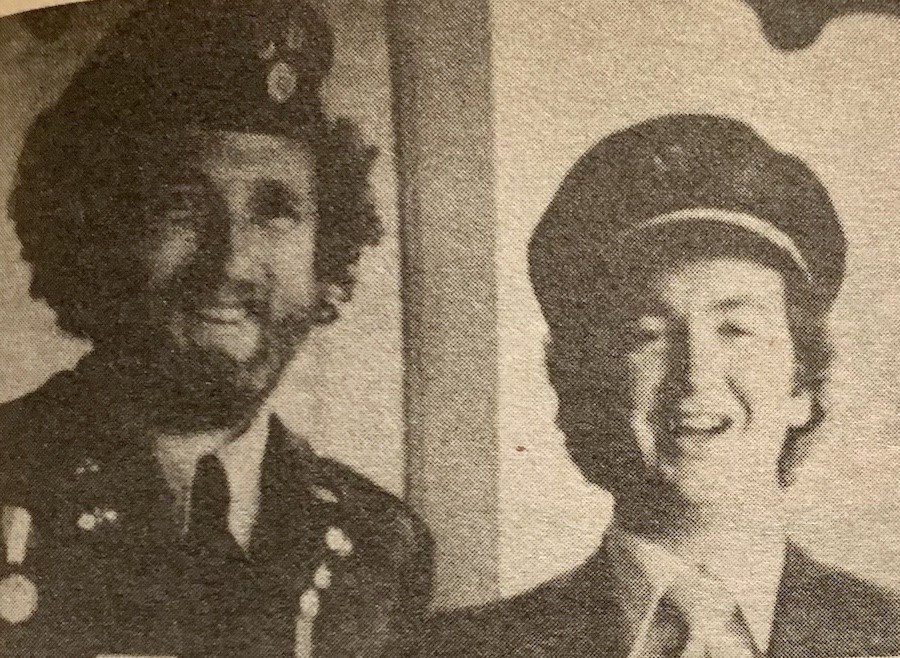 With Guinness World Records about to publish a new record for driving around the world of 102 days, the ‘boys from the Maritimes’ had to re-think their plan

In the ensuing weeks, Ken penned a letter to founding editor of the Guinness Book of World Records, Norris McWhirter, who eventually wrote back with good and bad news.

On the up side, there was a new category for around the world driving.

The rules were straight-forward:

The bad news? Mr. McWhirter was about to publish a record that had been set a year earlier for a 102-day drive around the world.

An American team, sponsored by Pontiac Motor Division of GM and National Car Rentals, had air-freighted over the oceans. To beat them, we would have to do the same.

The idea of languishing on cargo ships was replaced by having to raise at least $100,000 just to cover the air freight.

Planning a logistical monster like driving around the world, finding sponsors, fund-raising and figuring out the intricate corporate web took longer than expected

We quit our jobs and set up a company, Odyssey International Ltd. We raised $25,000 seed money to develop the plan and secure sponsorship. We figured it would take $250,000 to execute the mission.

In the late 1970s, there were no computers, internet or fax machines even. Mobile communication was in its infancy. 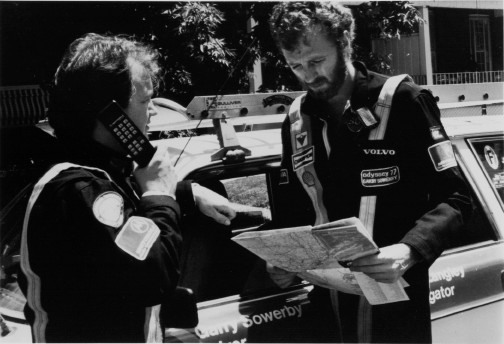 We communicated through air mail letters and telephone. It was slow going, especially for two Maritimers with no experience in racing, global expeditions or event management beyond hosting (some pretty good) house parties.

We would drive around the planet in 77 days or less, taking a month off the record and beating Phileas Fogg’s fictitious global trek of 80 days.

Securing sponsorship for an around the world drive was a problem.

After beating the streets of corporate Canada for two years, things finally started to gel. 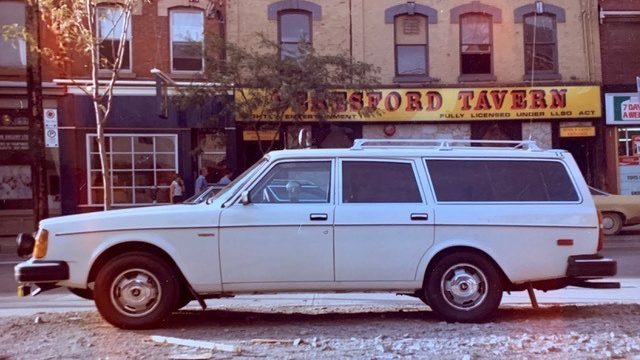 With Volvo on board, others soon signed on – Canadian Tire, Shell Canada, Motorola, Champion Spark Plugs and Bulova Watches.

The Toronto Sun, through United Press International (UPI), would provide the basis of our public relations plan, with an agreement to publish stories about the trek as we wound our way around the planet.

Sandy would be our advance man, flying ahead to key locations to grease borders and arrange media activities. Al would run the office in Canada, dealing with finances, logistics and diplomatic issues. 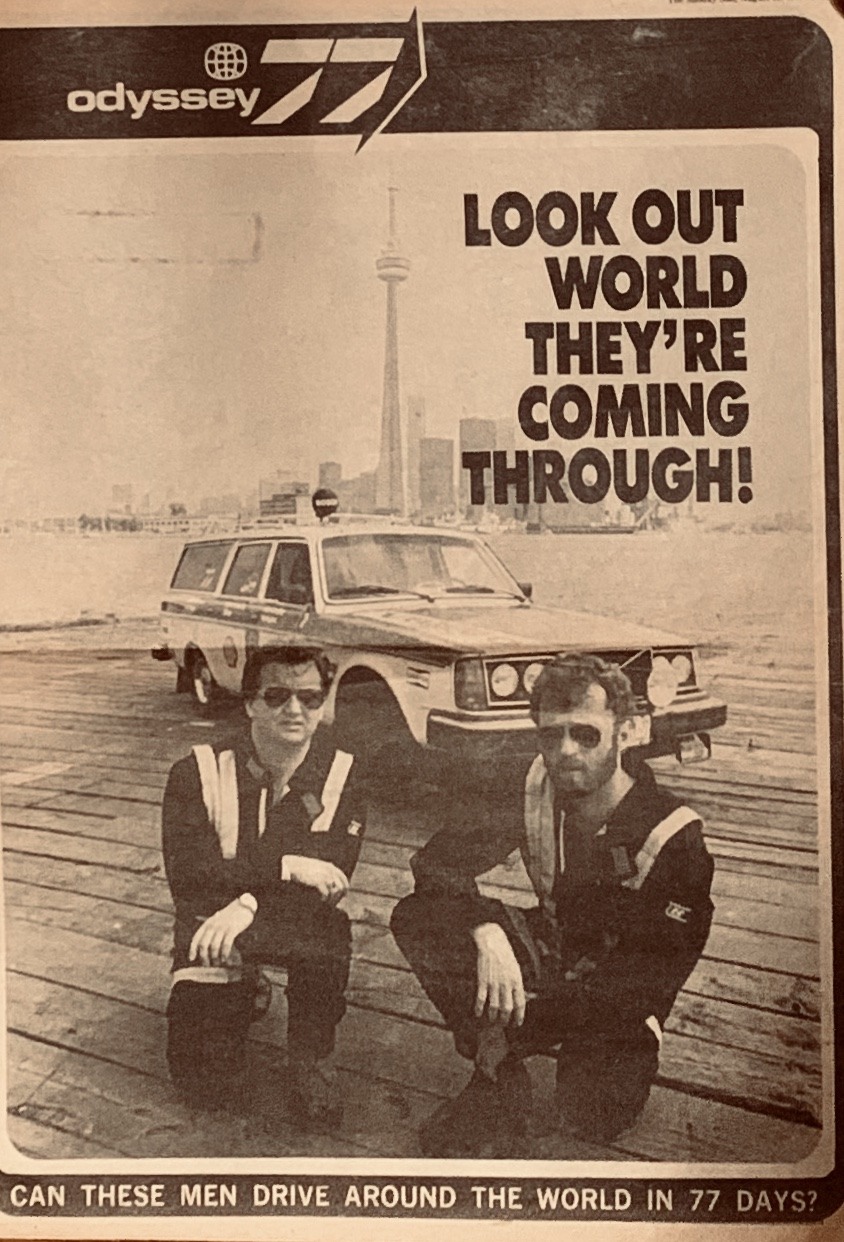 And they’re off! All we have to do now is drive around the world.

As I cleared the Shell Helps barrier, I could see family and friends in the rearview mirror. My parents, Ken’s parents, sisters, brothers. Some waved. Others just stared ahead, probably thinking the worst.

“Now we have to do this, Ken,” I heard myself say in a nervous voice. He didn’t answer but I knew he was thinking the same thing.

*Stay tuned for further instalments as Garry takes us around the world in a 1980 Volvo. 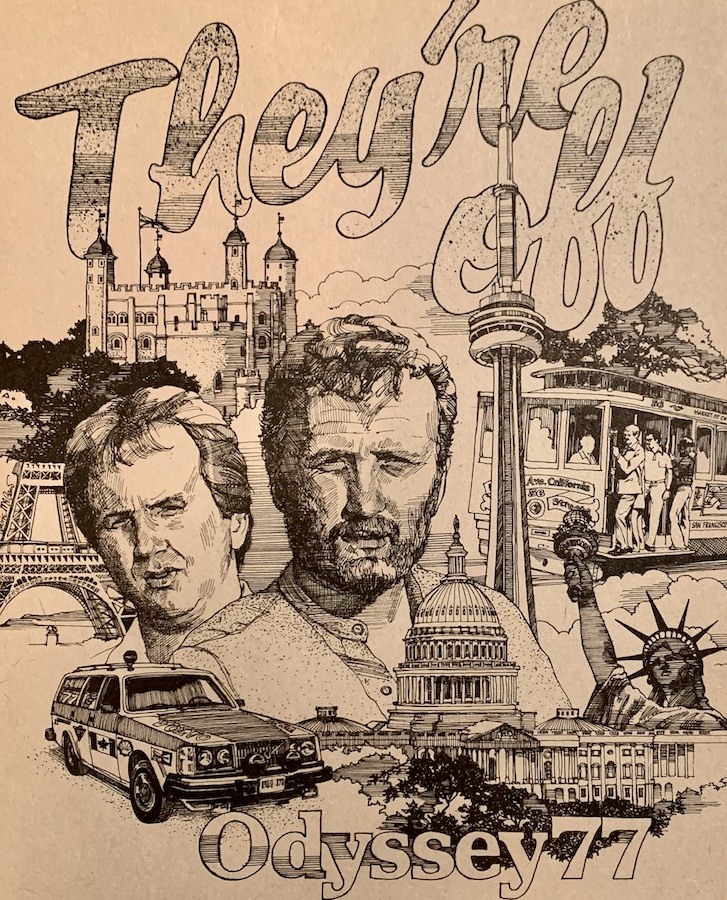