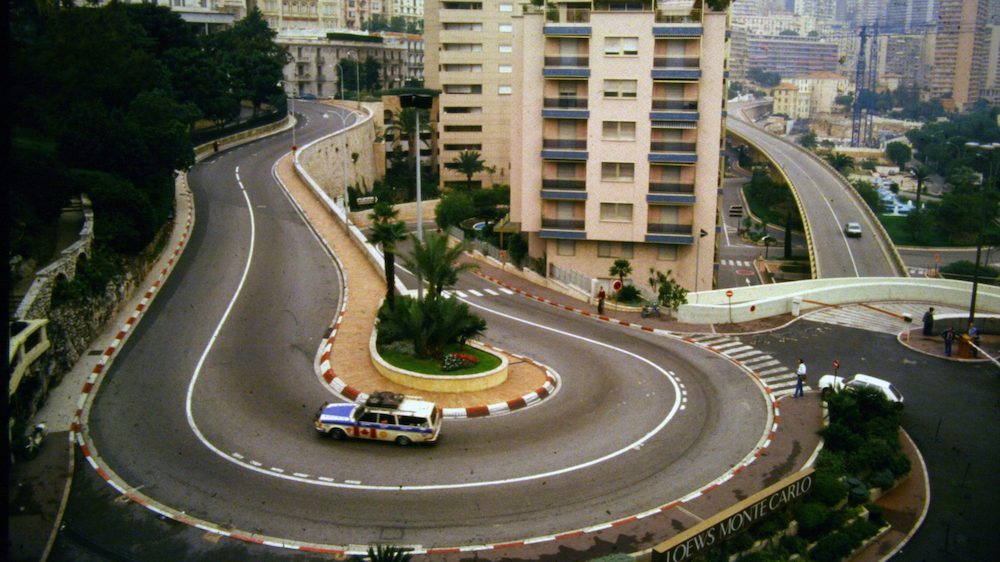 Driving Around the World – Week 8: Oulu, Finland to Monaco

Driving Around the World – Week 8 – Forty years ago this month, Garry Sowerby and Ken Langley were attempting to break the Guinness around-the-world driving record in Red Cloud, their 1980 Volvo 245 DL. This week, Garry is dubbed champion driver by a beautiful woman in a crowded Helsinki bar and the boys, now more than half-way, make up lost distance in Western Europe with film crews in tow.

It was a strange change of scene to be in a crowded bar, a TGIF Finnish happy hour in full swing, to be specific. It was standing-room only but the Helsinki-based film crew, who had been with us since the morning, did a fine job keeping our drinks topped up.

It seemed fitting that driving partner, Ken Langley, and I regale our growing audience with stories about why we were in the bar in matching racing suits, looking like a couple of baggy-eyed bumble-bees. We told everyone we had been on the road 49 days and were in a hurry.

After almost two months on the road, only another 15,000 kilometres to go!

If we kept on schedule for another 15,000 kilometres, we would have driven around the world in 77 days and eclipsed the existing 104-day record for circumnavigation by motor vehicle, by almost a month.

We were more than half-way.

Although tired, the spirit of the friendly Finns perked us up. As did the most beautiful woman in the bar, when she stood directly in front of me and placed her index finger on my chest, pointing to the Champion Spark Plugs logo on my racing suit.

“Are you my Champion?” she breathed, in a sultry spy-who-loved-me voice.

She was eager to check out Red Cloud, our 1980 Volvo 245DL, safely parked in our hotel’s parking lot across the street, crusted in ice from its Arctic drive. It was probably out there telling all the local cars stories about its 49 days on the road, covering more than 26,000 kilometres.

Earlier that day, October, 24, 1980, we had begun Week 8 of our around-the-world trek from a tidy motel in Oulu, just south of the Arctic Circle in Lapland. 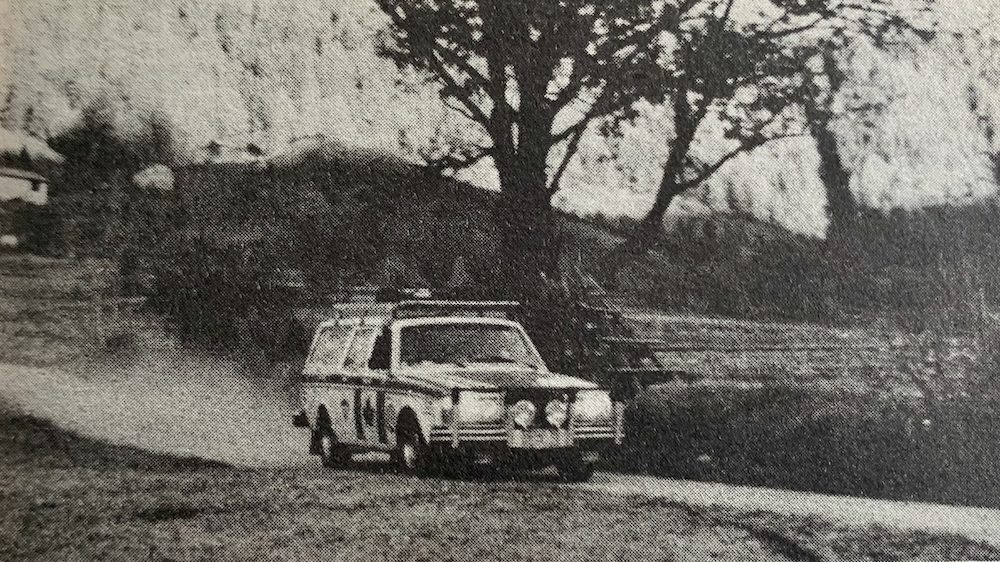 Our plan had never been to drive that far north into Europe.

We had air-freighted the car from Pakistan to Greece to get over the Iran-Iraq war and had to make up the driving distance for the Guinness record we were chasing. Driving into the Scandinavian Arctic solved the problem, but put us on slippery, icy and snowy roads.

It was sunny and crisp in Oulu that morning, though. The air was so clear, it seemed we could see Monaco, six driving days away on the Mediterranean Sea. Monaco was to be the day off Ken and I had often dreamed about during the hundreds of hours together in the car.

I was the only driver allowed, according to the Guinness rules, which meant 12 to 14 hours a day behind the wheel. Unlike our trek through North America, the Australian Outback, the Indian subcontinent and the Eastern Bloc, on this leg of the journey, we would have company.

The team and film crews would take the fastest roads through Western Europe. No Iron Curtain borders, no kangaroos, no dysentery… just pedal to the metal

The Toronto-based film crew we had last seen in Australia would follow along with us for the 1,200 kilometres from Copenhagen to Innsbruck. Then a film crew from sponsor Shell Canada would meet us in Frankfurt and tag along for five days.

In Helsinki, fellowship with Finland’s happy hour socialites was uplifting but we didn’t last long. We left while the band played on.

Although a tad groggy the next morning, we rallied and were surprisingly quick-witted and coherent at a press conference at the Canadian Embassy where we entertained diplomats and press with tales of the road.

Our route to Monaco would pass through Sweden, Denmark, Germany and Switzerland, with a diversion to Rome. One of the film crews was bent on filming Ken and me, touring the Colosseum in our bumble-bee racing suits. Ahhh show biz.

We would take the fastest roads available on autobahns and autostradas most of the time. Being in western Europe, we wouldn’t worry about security, ambushes, kangaroos in the night, dysentery, bed bugs or someone throwing a dead child onto the road in front of us. There was no Iron Curtain to deal with, the food would be good and the bedsheets clean.

Better travel conditions through Western Europe, but driver’s throttle leg getting worse by the kilometre

The pain in my right knee was getting worse and only felt better when I could straighten my leg. Germany wasn’t so bad though. I just kept the gas pedal on the floor, stretching the leg out. Other times I’d plant my left foot on the throttle for relief, but that was an awkward and dangerous dance when it came to shifting gears.

For a while, I jury-rigged a cruise control system, utilizing a sawed-off snow scraper jammed between the front of the seat and the gas pedal. We soon deemed it a safety hazard and scrapped my rudimentary, unpatented technology.

Red Cloud topped out at about 150 km/h, not bad considering wind resistance of the roof rack and weight of the loaded car.

We rolled flat-out on the autobahns, past perfect German villages that looked like clusters of doll houses. Temptation to get on the back roads for filming was mostly overruled because of a scheduled press conference in Frankfurt, where we would rendezvous with the Shell Canada film crew. 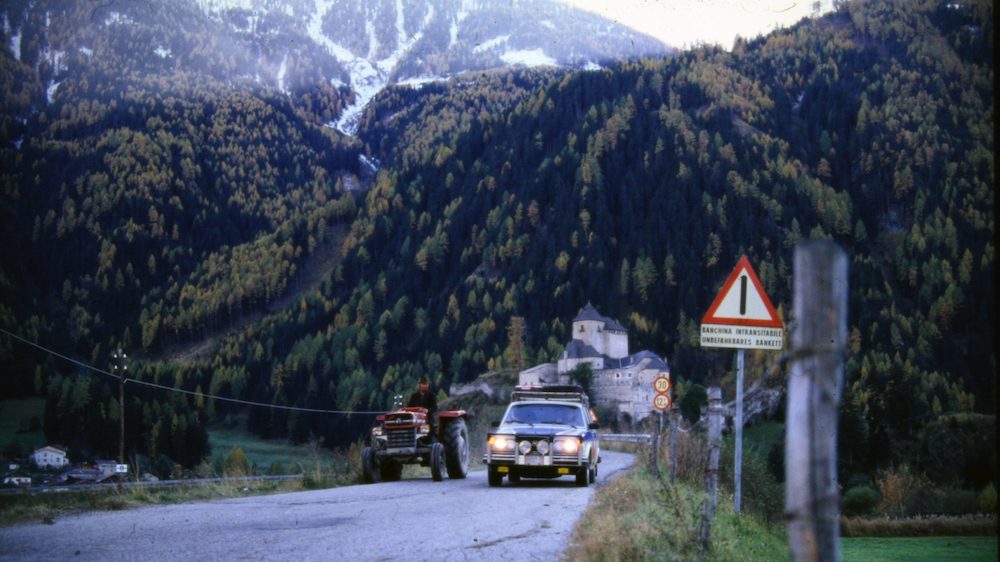 With the film crew following us, we felt like we had visitors. We had two-way radios so, for the first time since leaving Canada we could communicate with the outside world while in the car, but that world was limited to the line-of-sight reception of the hand-held radios.

In Rome, we got word from Al McPhail, back at the office in Canada, that the bank needed our personal guarantees to borrow yet another $15,000 to cover expenses and minimum payments on our credit card bills.

The reality of what was waiting at home was sinking in.

Who did we think we were driving through Europe on a global boondoggle with two film crews in tow?

We had given up on our careers and were in the bubble of an all-consuming event. Since we were managing a complicated, physically-demanding program while constantly on the move, it was all we talked about.

The ‘let’s get this thing finished’ demon reared its head. Rather than wishing it were over, though, we realized we should enjoy the opportunity we had been given. Our morale depended on us focusing on ‘getting there’ rather than ‘being there’, because we still had a long way to go.

It was the open road that had sparked the idea in the first place, not really caring about the destination, just out there with the unexpected on the horizon. One day at a time.

The daily routine was stop every five hours at fuel stations, load up on whatever we could find to eat and move on. We rolled through Hamburg, Frankfurt, Munich, Innsbruck and, finally, Rome. Red Cloud never missed a beat.

By the time we reached Monaco, we were pumped. My right knee felt fragile but it was holding up. Time out of the driver’s seat might be just what it needed.

The Hotel de Paris Monte-Carlo, Monaco’s best, had provided a complimentary two-room suite. Red Cloud, with its roof rack, wouldn’t fit into the parking garage so the valets let me park the grubby Volvo out front, with the gleaming Rolls Royces, Lamborghinis and Ferraris.

From the balcony of our suite, we could watch the glitterati checking out road-warrior Red Cloud, as they entered the grand hotel and casino. I wondered what they thought.

Week 8 was over. Our spirits were high but we didn’t get lucky at the Casino that night. No one tapped me on the chest and asked if I was their Champion, either.

Week 8: Oulu, Finland to Monaco, click here. (You are here)