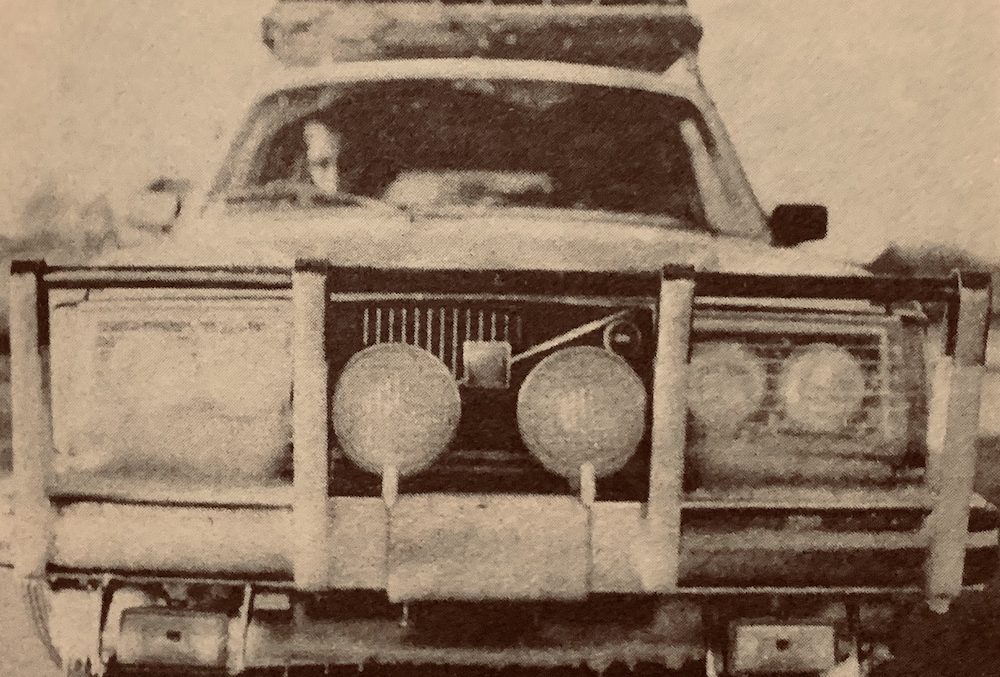 Driving Around the World – Week 7: Belgrade, Yugoslavia to Oulu, Finland

Driving Around the World – Week 7 – Forty years ago this month, Garry Sowerby and Ken Langley were attempting to break the Guinness around-the-world driving record in Red Cloud, their 1980 Volvo 245 DL. This week, the boys sweet talk and sweat their way through Communist borders, guards with no sense of humour and large defector-sniffing dogs. And a ravishing beauty named Radka.

A damp, north wind howled as we zeroed in on the border post. Hungary and Czechoslovakia had been surprisingly easy but this would be a tough one.

In 1980, tension at any frontier of the Deutsche Demokratische Republik (DDR), more commonly known as East Germany, was world-renowned. Arriving at a border post in a car covered with corporate sponsorship decals was sure to pique interest with officials.

The scene was right out of an Iron Curtain spy novel. What loomed ahead seemed about as festive as an advanced calculus exam.

Greatcoated, chain-smoking, heavily-armed border guards looked like something from a bad Halloween party. But it was our reality on Day 42, October 17, 1980, of our attempt to set a new record for circumnavigating the world by motor vehicle. 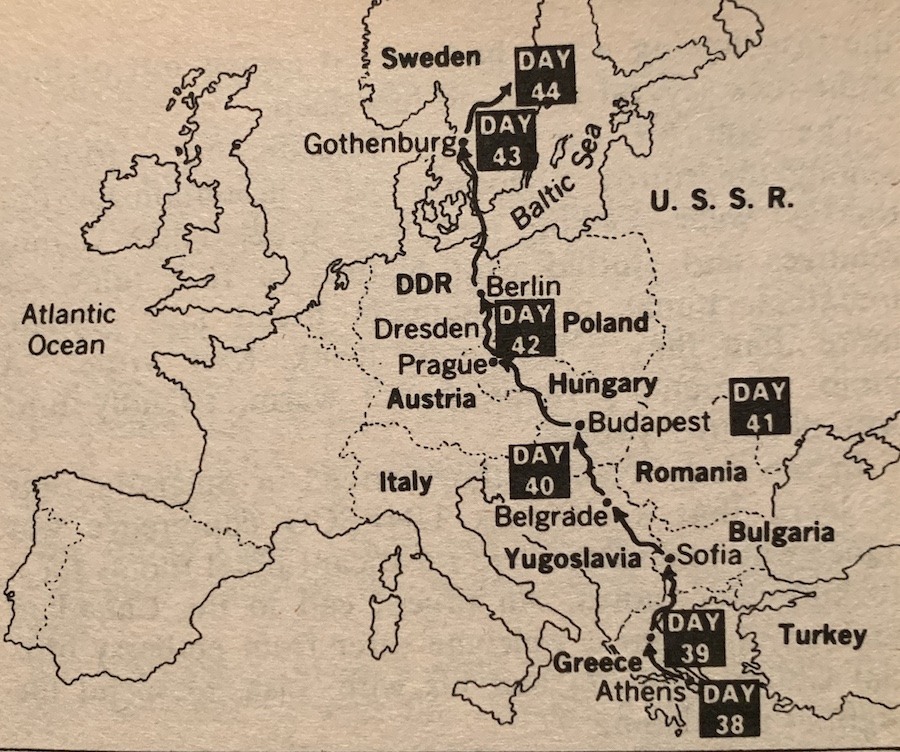 A young immigration officer demanded $6 U.S. for the necessary entry stamp in our passports. No other currency would do, exact change only.

Partner, Ken Langley, fished into his passport folder and pulled out his last six one dollar bills and handed them to the officer who took the money then disappeared into a dingy administration building.

Fifteen minutes later, looking quite perturbed, Corporal ‘No’ handed back the passports. It would be impossible to stamp them, he indicated, because one of the bills had a small tear.

That was it, we’d be spending the night in Eastern Bloc purgatory until the currency exchange opened in the morning.

There were no smiles at the border of the country that brought the world the Berlin Wall and one of the strictest communist regimes ever hatched.

Ken was surprisingly calm. I assumed he was daydreaming about Radka, the fresh-faced Czechoslovakian hitchhiker we had picked up that afternoon outside Prague.

While I did behind-the-wheel duty, Ken had seemingly fallen in love with the ravishing beauty. He’d spent the afternoon trying to figure out why Radka, who spoke only Czech, had a license to drive a farm tractor.

She was gone now and we were stalled entering East Germany.

As we settled in for a long night, Ken remembered the American silver dollar an Australian journalist had given us for good luck. He dug into his shaving kit, flashed it to the immigration official and we were waived on to customs officers. One more line-up and we’d be on our way. 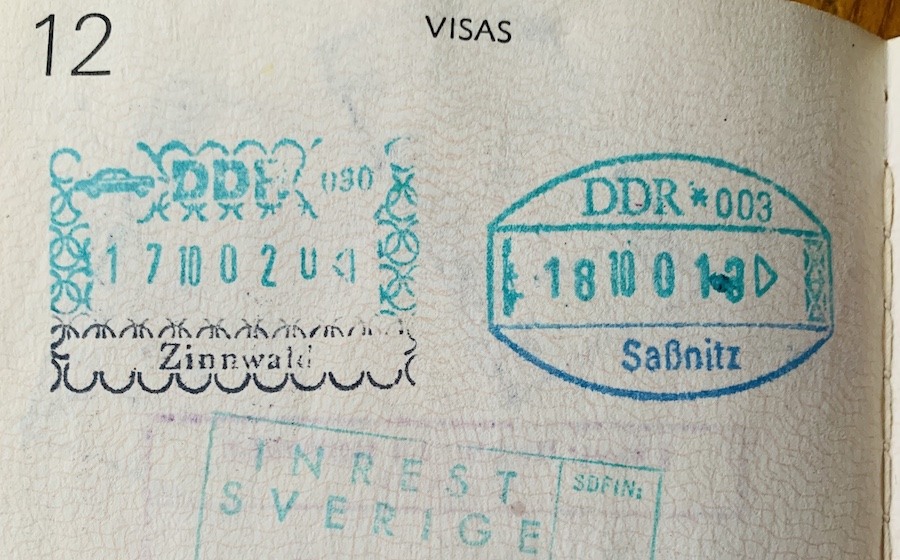 Ken was working on routing while I maneuvered Red Cloud through the maze of buildings, barbed wire and control towers. The place was swamped with East European tour buses and trucks hauling tarpaulin-wrapped trailers.

Stress was building. Our frayed nerves were a product of sleep depravation and desperation in trying to enter one of the strictest bastions of communism in the world. Our vehicle, an in-your-face symbol of capitalism, was as obvious as a streaker at a temperance convention.

Ken remained calm though. What a team! One is about to crack, while the other chills.

As Ken read, I began to sweat as guards leaned a ladder against the side of the one of the trucks in front of us. Then a massive German Shepherd dog climbed it and sniffed its way around while another put its nose to work on the under carriage.

In my exhausted delirium, I kept thinking about Red Cloud parked a few nights ago in the drug-infested streets on the fringes of Pakistan’s Karachi airport, then about the drug-smuggling movie Midnight Express.

Sweat poured off me, imagining a Karachi drug lord planting something under the car for his connections in Western Europe. 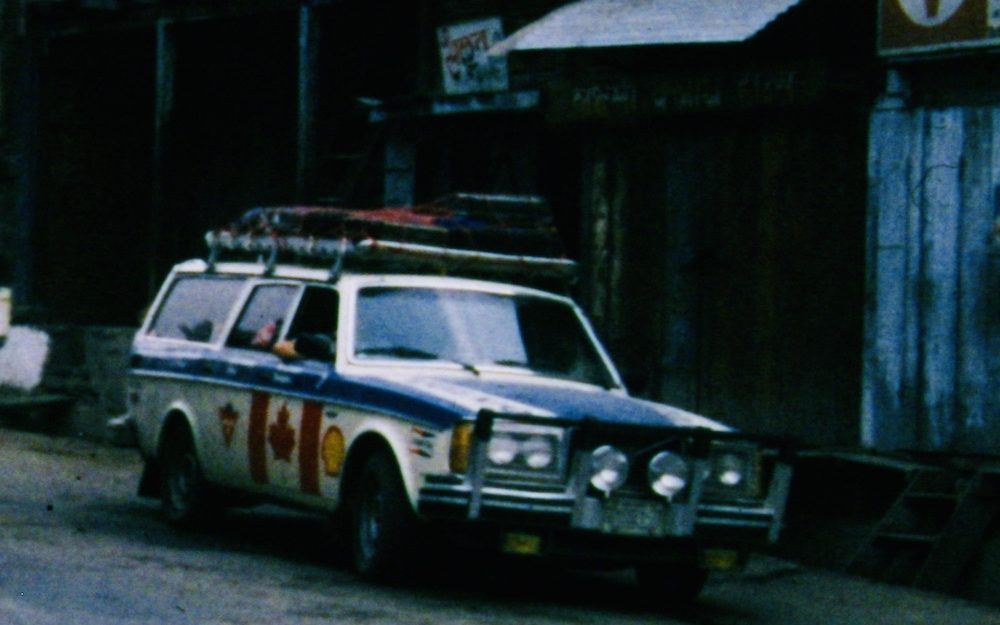 What if the lovely Radka was a spy bent on putting a stop to our capitalistic venture?

“Ahhh, dddog,” I choked. Aside from a few cans of goat cheese, we had nothing that I knew of to hide.

Ken muttered something and continued reading.

“Dddddog,” I stuttered again, as the ladder-climbing canines nosed their way through the truck in front of us. Ken’s response was the same. I fought the panicked heebie-jeebies while the dogs sniffed their way past the Volvo to the truck behind us.

An hour and a half later, on the gloomy winding road to Dresden, I teased Ken about Radka and her tractor-driving skills. 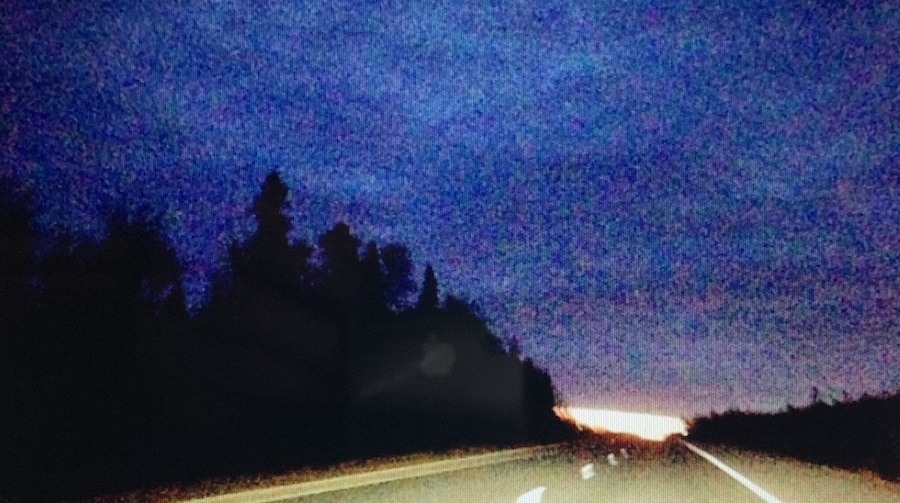 We were in a good mood, a usual affair when a communist border post is behind you on an over-budget around-the-world escapade that can only be rectified by getting the job done so our capitalistic system can advertise, pay a royalty and get you out of the hole that the Iran-Iraq war put you in. No sweat!

“Ahh, and you were so cool about the dog,” I complimented my driving partner.

“Yeah, it was cute. But why were you making such a big deal about that poodle gawking out the window of the Bulgarian tourist bus parked beside us?”

A hoped-for overnight stop in Dresden was not to be, thanks to transit visas. Garry and Ken had to push on without sleep

In Dresden, we found our way to what looked like a full-service hotel.  We were starving, so we went into the restaurant to eat before checking on a room.

It seemed like date night in there, couples dressed in their stylish best staring into one another’s eyes, or were they afraid to look at us? The restaurant was lit with flood lights as bright as an operating room.

Our waiter, probably a KGB agent with a Stechkin APS machine pistol strapped under his armpit, was one slow-moving, suspicious dude.

After dinner, we went to the front desk to ask about rooms. When the receptionist checked our passports, she frowned and said we had transit visas. We must keep moving.

Two young women approached us as we crossed the lobby. In halting English, they asked for a ride. We joked about taking them to Berlin. When we stopped to let them out a few blocks from the hotel, a police car cruised by and pulled over in front of us.

Our passengers were terrified.

Ken got out and approached the police car with maps and clipboards, babbling to the officers about finding the autobahn. The diversion provided enough time for the girls to get out and flee. 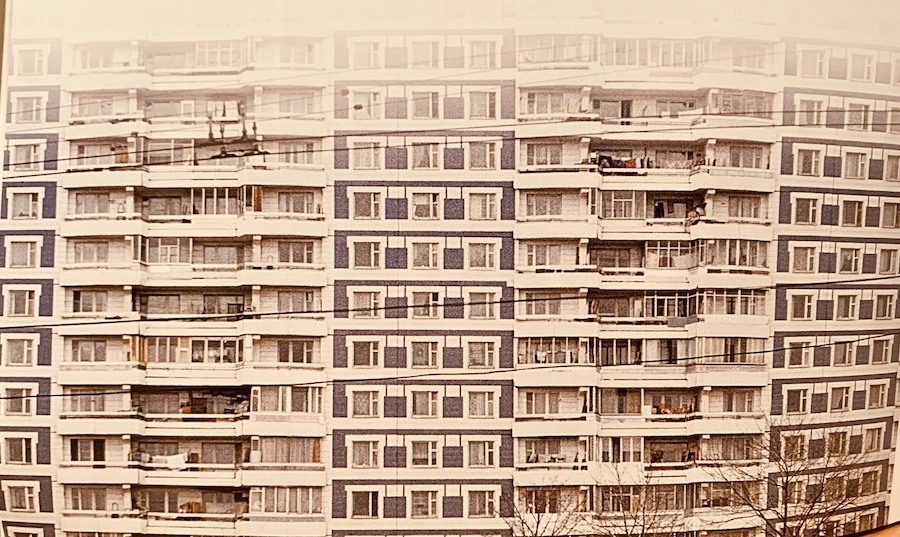 We skirted Berlin in the middle of the night. The fog and drizzle had an orange cast from the search lights scanning the countryside.

At 8 a.m., we arrived at the port of Sassnitz, East Germany, in time to see our ferry steaming toward Sweden. We would have to wait eight hours for the next one.

I wasn’t sorry to be leaving. The country was the saddest place I had ever been. No colour on the walls of anything. Billboards filled with communist propaganda. Worse, there were no smiles on anyone’s faces. No one laughed. If we had made eye contact with anyone, it was fleeting, and skittish. The opposite of India and Pakistan where, even in extreme poverty, we saw happiness.

We finally arrived in Sweden late that night and drove to Gothenburg, the home of Volvo. We’d been on the move for 41 hours and sleep was taunting our eyelids.

Ken’s health and Garry’s morale dip as they head toward the Arctic Circle.

The next day, after servicing the car we headed north toward the Arctic Circle. Ken‘s irritable bowel syndrome was acting up and he was still passing blood. He gave himself 12 hours to improve or he would go to a hospital. Then he curled up in the back seat and fell into a deep sleep.

It was a difficult time for me, checking him in the rearview mirror from time to time. I knew how sick he was and realized his medical situation may be the pothole that would end the adventure.

So much for the hundreds of meetings and three years of planning. Not to mention the financial mess we would come home to. I imagined smug looks from naysayers who had expected failure.

High in Scandinavia, the traffic was light so I pushed Red Cloud. The topography looked a lot like Nova Scotia. We moved fast as I worked the overdrive switch in and out. For a couple of hours, after a month and a half of driving every single day, I forgot about what we were doing and just enjoyed the wide-open northern road. 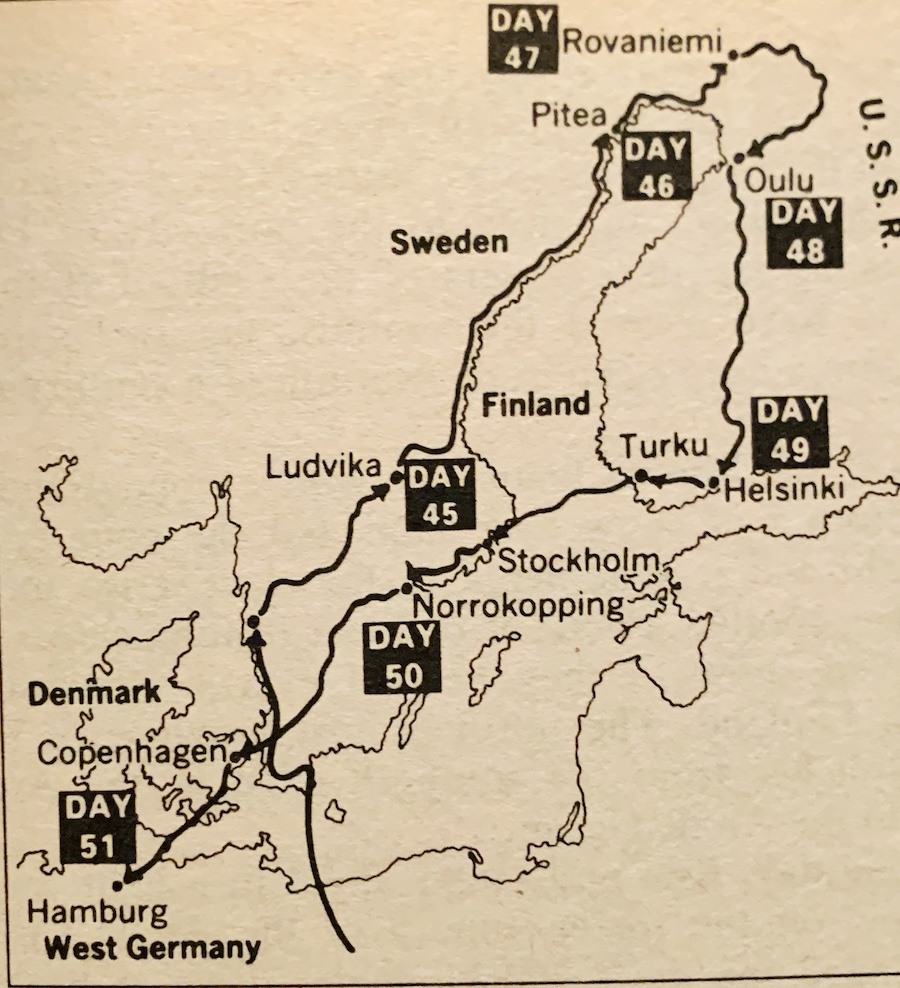 When Ken finally woke up, he felt much better.

The week ended in a snow storm with icy roads in the Finnish Arctic. I had to keep reminding myself we were in Europe. Just keep the car between the ditches from here on and don’t make a driving mistake.

There would be less worry now. The food would be good, the roads fast and borders a snap. It was Day 48 and, as we pulled into Oulu, Finland, it was obvious Ken had made a miraculous recovery.

After seven weeks and 26,191 kilometres behind the wheel, I was getting tired. Snow had started that afternoon and was forecast to continue into the next day.

My right knee, on the throttle leg, was throbbing.