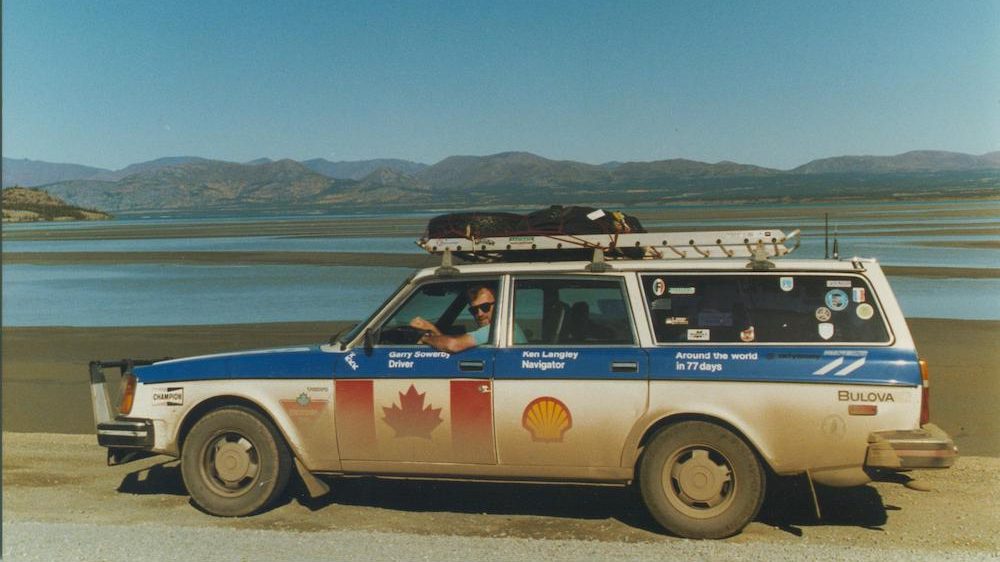 Toronto’s CN Tower was less than five years old in 1980 when Ken Langley and I set off from its base in an attempt to drive around the world in 77 days or less. If successful, our trip would eclipse the existing Guinness World Record for circumnavigation in a motor vehicle by almost a month.

Before leaving, the tower’s public relations people bestowed upon us ten miniature replicas of the CN Tower to hand out as gifts to special people we met along the way.

“Good to meet you Mr. Diplomat, Movie Star, King or President. Here’s a statue of the CN Tower so you will remember the two yahoos from Nova Scotia who wanted you to grease the border so they could claim a spot in the record books.” 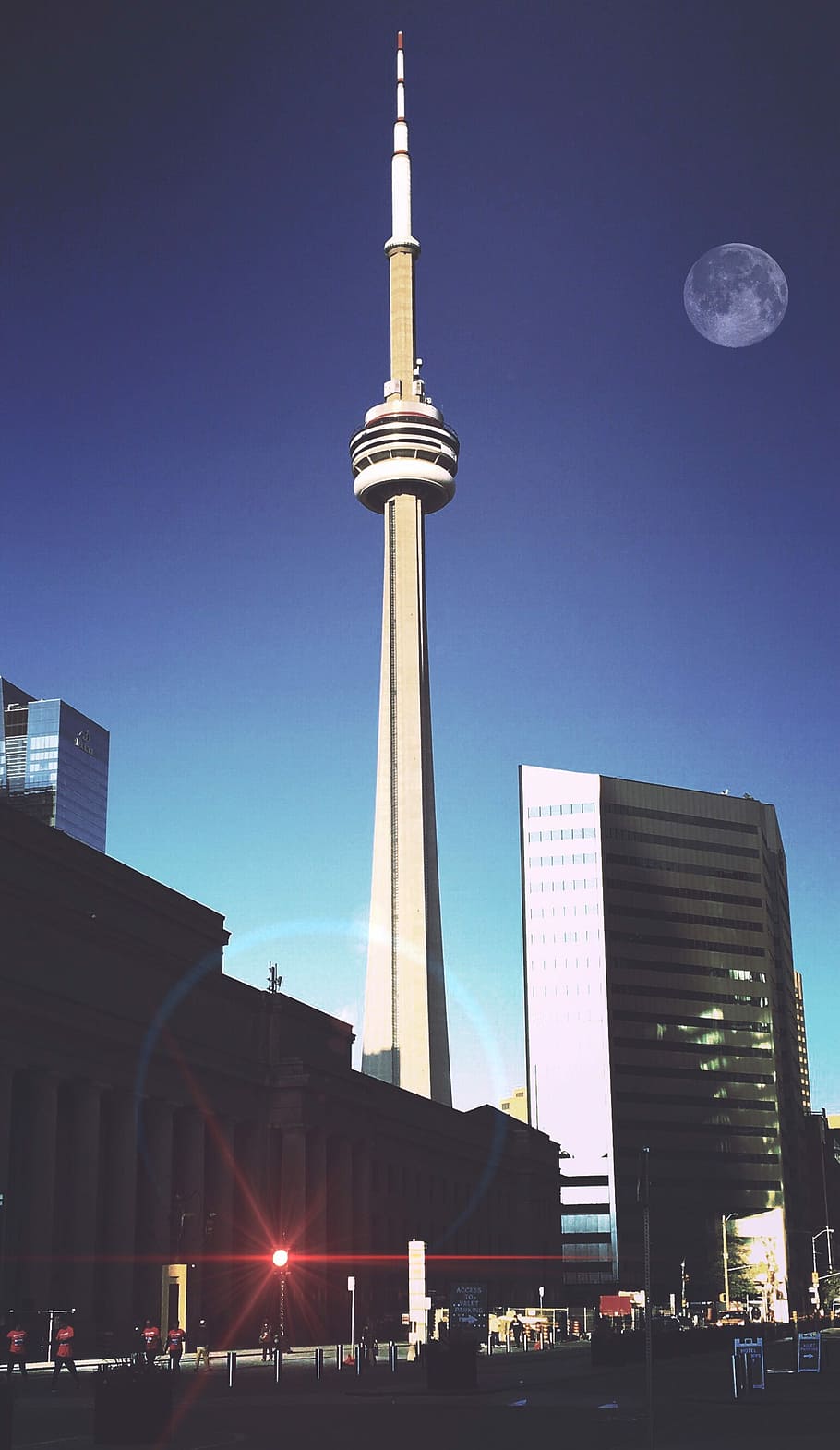 Later, while gloating over their graft, they could look in the Guinness Book of World Records and see the CN Tower right there under tallest free-standing structure.

The towers seemed a good idea until Ken and I had a chance to take a closer look near Moose Jaw, Saskatchewan on Day 3 of our big adventure.

The fake plastic marble bases supporting cheesy gold towers were the personification of tacky. At the top was a plastic antenna that, when flicked with a thumb, would make a loud DOINNNG noise.

Imitating the sound after meeting anyone of any importance became an inside joke.

“Thank you for signing our log book, Mr. Mayor. Sorry we don’t have the heart to lay one of the tacky towers on you.” DOINNNG. DOINNNG and we were outta there.

By the time we had crossed North America and Australia, DOINNGING had evolved into a mantra in our daily routine, one of the foolish things that got us through brutally hectic days. A little naughtiness that in reality wracked us with guilt as we sped around the world without giving a single one of the replicas away.

I imagined us getting back to the CN Tower in Toronto where the media would be waiting. We would be heroes to the masses on hand.

I could see us opening the tailgate and the ten replicas falling out in front of the Tower’s PR people. We, of course, would be banned from Toronto and exiled back to the Maritimes!

Driving through India on the record-setting drive was three parts horn, one part driving

Day 27 of the adventure found us in central India. We had been driving since six o’clock in the morning into the usual Sub-Continental drill of three parts horn and one part driving while Montezuma’s Revenge tortured our bowels. Accident avoidance was routine as packs of lumbering Tata transport trucks came at us filling the road like bad dreams. 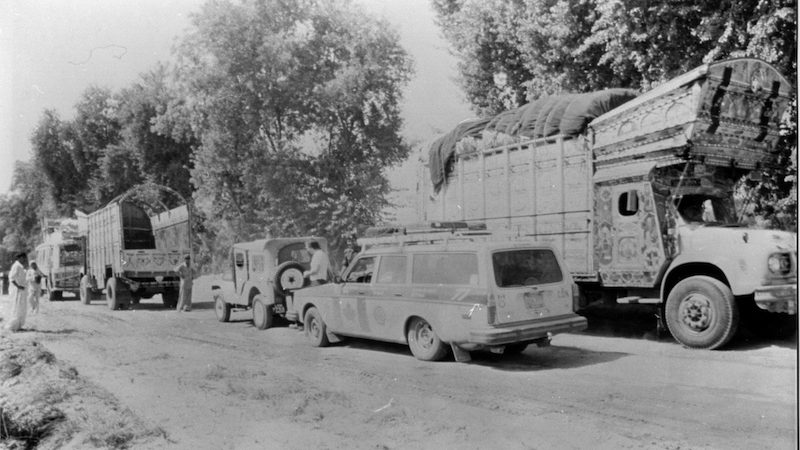 That evening we entered another sprawling city I had never heard of and negotiated our way through creeping rickshaws, buses, bicycles and taxis looking for a place to spend the night. Signs were in local script so when we saw a dim neon light that read Jackson Hotel, I yanked the wheel and horsed the Canadian built 245 DL Volvo we called Red Cloud through an archway into a tidy compound. A security guard saluted as we entered.

Inside, the quadrangle held a variety of businesses. There was the spartan hotel on one side. Another side was Jackson Hardware, another had bars on all the windows and the fourth side looked like a residence.

We asked about a room and were obliged with a spacious, clean suite with private bath and an air conditioner the size of a Smart Car that took the attendant 10 minutes of coaxing to fire up. Then he turned on an equally complex radio and proudly told us the tune blasting very loudly was on the Indian Top Ten. 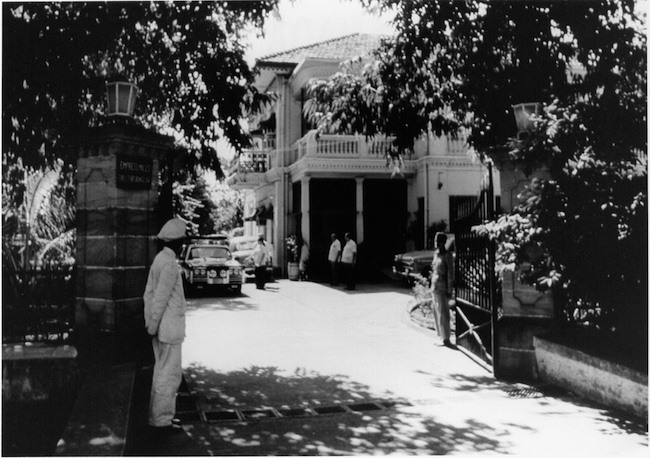 We unpacked and got cleaned up, grooving to the non-stop music. The cool room was a treat after a day of sweltering heat in a car with no air conditioning.

Soon a fresh-faced young man came to the door, introducing himself as one of the Jacksons.

He had been looking at Red Cloud and understood from the graphics on it that we were driving around the world and would be honoured if we would meet his parents, who were across the courtyard in the residence.

The interior of the house had a peculiar layout with no hallways. We went from one room directly to the next until, after six rooms, we ended up where Mr. and Mrs. Jackson lay in bed.

They were propped up with ornate pillows looking quite regal and became very excited about meeting a couple of Canadians in the midst of their attempt to set a world driving record.

Would the Jackson Hotel in Jabalpur, India be the place to finally shed one of the CN Tower replicas?

After pleasantries I looked at Ken then discreetly flicked my thumb. Finally, a place to unload. I excused myself and negotiated back through the six rooms then ran across the quadrangle to the Volvo and fished out one of the tacky towers.

I checked it over to ensure it hadn’t been broken during the brutal shaking Red Cloud took crossing the Australian Outback. The fake marble base shimmered under the interior light as I gave the antenna a couple of flicks with my thumb. DOINNNG, DOINNNG. It sounded the same as it did in Moose Jaw.

Back in the Jackson’s bedroom Ken was waxing on about life in Cape Breton.

I was going to give the tower a quick flick of the thumb as I walked into the room but thought Ken might lose it and we would look like a couple of immature jerks rather than big-time adventurers. 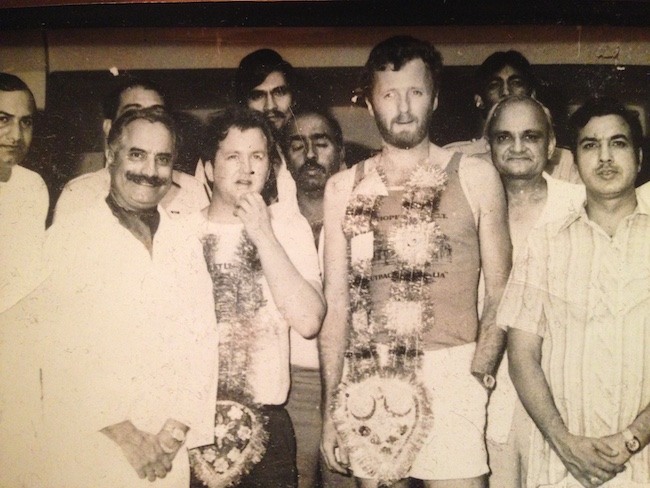 When I presented the tower to the Jacksons, we were surprised by their excitement. They were genuinely thrilled. The whole family started talking very loudly in a dialect we obviously couldn’t understand.

Mr. and Mrs. Jackson leapt out of bed and took the tower through a door on the far side of the bedroom.

We followed them through another three rooms into a massive library. The walls were lined with hundreds of books. Lush carpets covered the floor. At the far end of the room a stone fireplace with a wall-to-wall mantle held objects that were obviously treasured family heirlooms.

“This is unbelievable,” I thought. “The tower really will be passed on from generation to generation signifying the time the rogue Canadian adventurers were in the Jackson household holding court with tales of life in Canada.”

Then Mr. Jackson smiled as he placed the gift on the mantle, beside another CN Tower….. exactly like it. 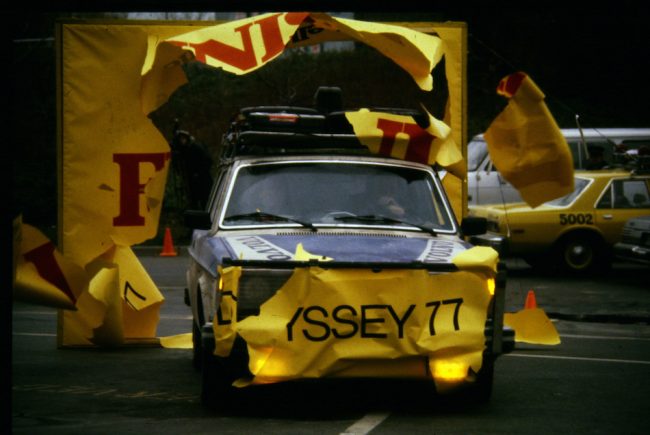