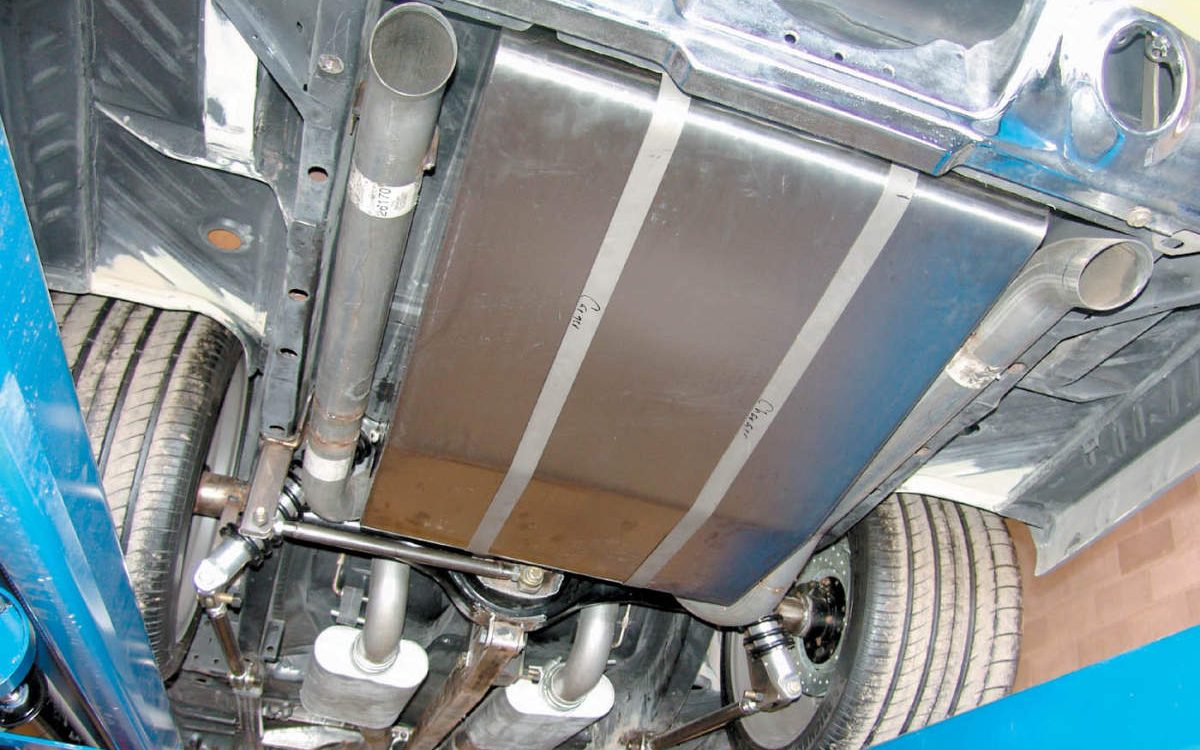 *Part 12 of our series on rebuilding a 1970 Plymouth. Read Part 1 here. Find the rest of the series at the bottom of this post.

Bolting on new parts usually has a ripple effect.

Maybe more of a tsunami effect.

Buying giant brakes might mean that you have to go wheel shopping and also install a new master cylinder and parking-brake hardware. Installing headers likely means installing new pipes and mufflers, too.

And in the case of the 1970 Plymouth, deciding on fuel injection instead of carburetion for the purposes of more precise tuning, aside from the parts purchase, meant extra machine work and someone who knows how to tune the system with a laptop computer.

The biggest expense outside of the Electromotive-brand computer, fuel injectors, sensor pack, wiring harness and the giant 1,600-cubic-feet-per-minute throttle body? The fuel system to support it all.

In a carbureted engine, the fuel tank feeds a smaller ‘tank’ (a.k.a. the fuel bowls) within the carburetor. Thus the fuel system is fairly simple: a low-pressure pump to keep the fuel bowls topped up, and a fuel tank.

Fuel injection is a totally different animal. The fuel is pressurized and sprayed into the intake manifold and the system pressure runs about 50 pounds per square inch in a sort of closed, pressurized loop that bleeds off fuel to the engine as it’s needed. Carbureted fuel pressure is about seven p.s.i.

The fuel pumps in this case — two Aeromotive A1000 pumps — are located inside a special new fuel tank made of stainless steel. The reason? Specific baffles have to be designed around the fuel pump’s pickup so that under no circumstances is it not submerged in fuel. If this happens under full power, it’s bye-bye engine. 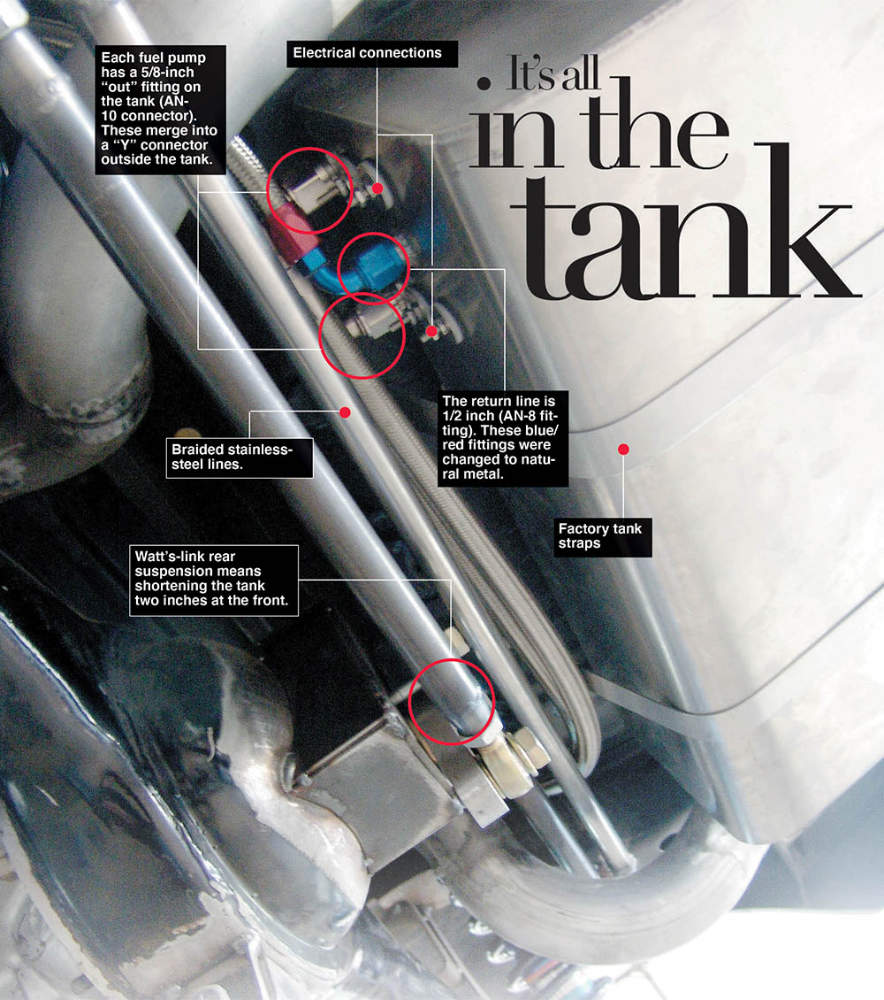 Keep that fuel pump pickup submerged or else, bye-bye engine

Under what circumstances could this happen? Aggressive driving with a low fuel level. Without internal tank baffling, the fuel will slosh around, potentially uncovering the pickup for the pumps. Mounting them inside the tank (submerged in fuel) also makes for quieter pump operation.

Interestingly, when the supercharged 7.4-litre V-8 was undergoing dyno testing, the fuel pressure began to drop at about 750 horsepower. This necessitated the second fuel pump to hit 1,000 horsepower.

I also wanted a tank that fit the stock location under the car, and one that would clear the new watt’s-link rear suspension and the three-inch exhaust pipes with their four-inch tips.

After some shopping around, I contacted Rick’s Tanks in El Paso, Texas, which already provided drop-in gas tanks for just such a purpose. And since each tank is handmade, building one two inches shorter, two inches narrower and two inches deeper (to recapture some of the lost volume from making it shorter and narrower) was simple enough.

Rick’s sent photos of the tank while it was under construction, which provides an idea of the detail work involved in such an undertaking – all because of a decision months earlier to go with fuel injection instead of a carburetor.

I paid about $2,500 for the tank. When it finally arrived after about three months — weighing in at about 50 kilograms compared with about 10 for the factory stamped-tin tank — we had to figure out how to connect it to the engine and add a return fuel line to create the fuel loop.

Although I was keen to bend some hard lines, I felt that using Russell-brand braided stainless-steel line would offer more flexibility (quite literally) and provide a better appearance.

I was going for an understated look and it’s great to see that in addition to its line of red and blue fittings, Russell offers natural-look-metal finishes. The lines (5/8-inch from the tank to the engine’s fuel rails, and 1/2-inch return line), the fittings and an inline filter added another $1,500 or so. 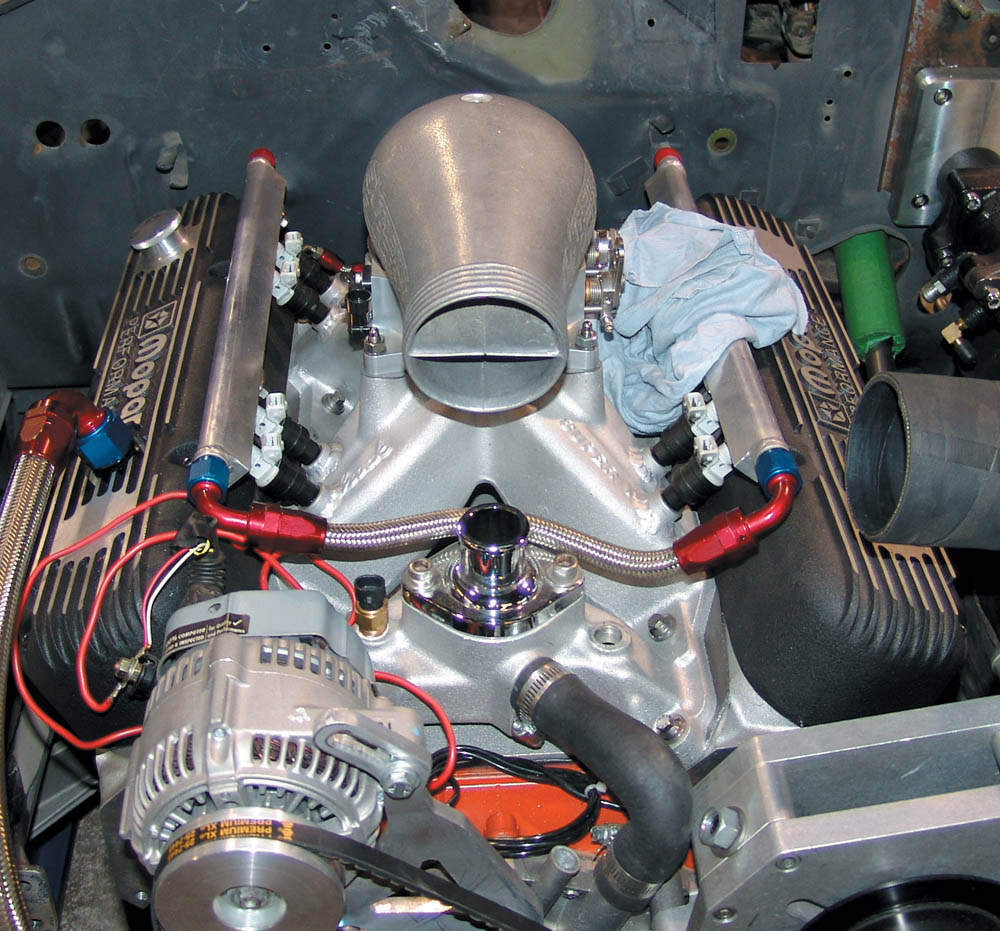 The other-other-other snag was the intake manifold that had to be machined to accept the fuel injectors. It also had to be dramatically opened up at the top to allow the 1,600-cfm throttle body to open. After making two fuel rails, we then had to fashion mounting hardware. Phew.

The cost of custom work to meet the performance goals of the custom engine is overkill for most ‘normal’ needs, but all the components, in varying sizes and degrees, are necessary for just about any conversion.

An exception is a much simpler kit that essentially replaces the carburetor. They still cost about $2,000 plus installation (count on $3,000 total). We have one of those in our project Mustang.

Whatever you do, don’t discount the tsunami effect. It usually begins with one cool part that ends with adding many more.

The complete series on the 1970 Plymouth Rebuild