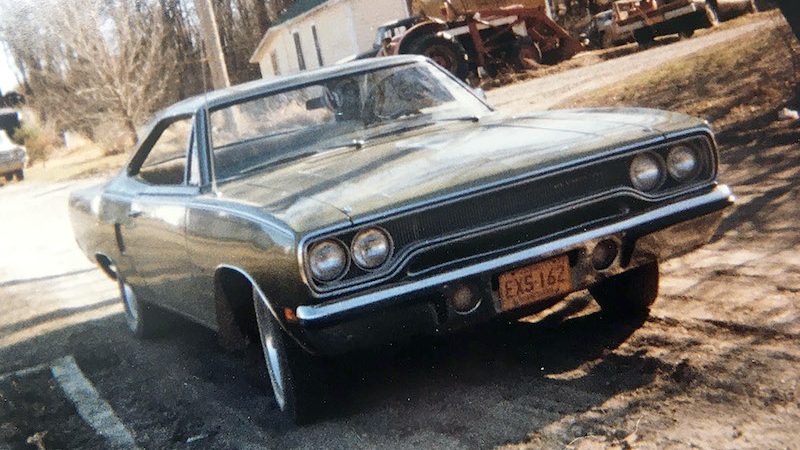 East Coast Garage: 1970 Plymouth – Out with the buggy springs

Pop quiz. What suspension technology found on the Project Plymouth dates back more than a century?

*Part 4 in Jeff Melnychuk’s series on rebuilding a 1970 Plymouth.

Leaf springs no doubt smoothed the blows to the buttocks dealt you by a horse-drawn carriage. And in the early days when ‘cars’ were nothing more than automated carts and carriages, leaf springs were naturally carried forward.

How, exactly, ‘buggy’ springs found their way into the automobile well into the 1990s is anyone’s guess, but the pace of change — or more likely the desire to make change — was slow.

Today we have computers, people who really know how to use them, and manufacturing processes that can cut those fanciful digital parts out of metal in a matter of hours. But that’s the easy part.

Measuring and cutting out is one thing, but what, exactly, are you cutting out? How did you arrive at these parts? Years of testing and computer simulation with the equipment and expertise to actually be testing and simulating?

So, unless you’re a suspension developer, any attempt at change could have disastrous consequences, even if the previous leaf-spring rear suspension was invented only minutes after fire and the stone wheel.

Leaf springs are bad for sports cars for a number of reasons. They are in charge of vertical motion, lateral control and wheel-torque control. And to do all that, they’re heavy, which means, along with a heavy rear axle to control, there are huge amounts of kinetic energy to also control.

The fact leaf springs have multiple tasks also means that when you try to adjust for one aspect, the others are affected.

For example, softening leaf springs for a better ride means they won’t control lateral motion of the vehicle as well and won’t control rear-axle torque as well. There’s a better way, of course, but who’s in a position to develop it? Who has that kind of time, money and expertise?

Working with Multimatic in Toronto — a company that develops racing suspensions and also makes the current Ford GT — XV developed modern front and rear systems for the 1968-’70 Chrysler intermediates (such as Plymouth Road Runner and Barracuda, and the Dodge Charger, Coronet and Challenger) that have been computer modeled and simulated, and track tested to work in the real world.

What you end up with, according to the company, is a classic muscle car that handles like a modern supercar. That’s a bold claim to be certain, but considering that Multimatic, also a developer of suspensions for elite automakers such as Aston Martin, was contracted to do the development work, who am I to argue?

The idea is to control the lateral motion, vertical motion and torque motion with three separate systems. Do this, Multimatic says, and each of the three aspects can be tuned independently. For example, you can address ride quality without affecting lateral control. With leaf springs, there’s always a compromise between the two. Coil springs are also much lighter than leaf springs, so there’s less mass to control, which improves all around performance.

For the Project Plymouth, however, there is one point of deviation. We had already begun the switch to a non-leaf-spring setup before I learned of XV Motorsports. Their rear-suspension system controls lateral motion with a panhard rod that connects to the frame and the rear axle, while this car uses a watt’s link with a long torque arm to control axle torque. XV also uses a rear anti-roll bar while this watt’s link system actually does not.

The systems do basically the same thing, but the watt’s link also controls brake torque with the torque arm putting that load at about the centre of the car. That might be nitpicking, but the real benefit to the XV system is the development work in the coil-spring and shock/dampener package.

Since I was one of XV’s first customers, I was able to buy a set of tuned rear shocks and springs, even though I wasn’t buying their whole rear-suspension package. Frankly, I would have, but development work was too far along on the Project Plymouth to make the switch.

The shock locations and angles are basically the same as XV’s, so the results in ride and handling should be similar. 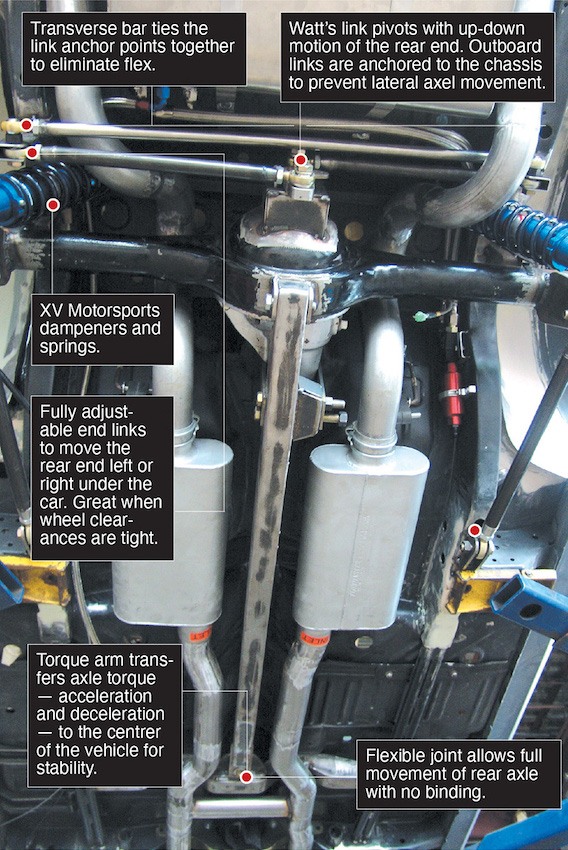 You can plainly see how long the torque arm is. To allow free up-down motion and rotation of the rear axle (to allow the vehicle to lean to one side) the attaching point at the middle of the car is flexible. Most of the suspension parts have been fabricated from steel plate and square and round tubing.