*Part 3 in Jeff Melnychuk’s series on rebuilding a 1970 Plymouth.

Anyone who has ever owned a project car knows that it’s never really ever finished. Ever.

It’s a canvas you just keep adding stuff to and fixing when it needs fixing. There’s no goal, no end point. You put a little money into it when you have some to spare. Change the shifter. Rebuild the carburetor. Buy new door panels. Take out the gas tank and paint it.

There is absolutely nothing wrong with this approach. Most hot rods are done exactly this way. They’re hobbies to putter away on and have fun with and that’s exactly how it went with my 1970 Plymouth. I bought it bone stock in 1981. Mag wheels were added, then replaced with a set of factory five-spoke wheels. It was painted yellow, twice. In my back yard, I put in a hot camshaft – into the third engine, that is – but the car was your typical hobby car.

At that point, the meandering and goal-absent random spending come to a screeching halt, but not until some damage has already been done.

Enter the tubular K-frame from the last installment of the Project Plymouth where improvements in steering and braking were sought and, at the time, anything was believed to be better than soggy 40-year-old stock technology.

Setting goals is vital with a project of any magnitude. Imagine building a house without a plan or a goal or even a drawing.

“Just start digging the hole right over there boys and we’ll make it up as we go.”

And like a house, you should have a reasonable idea of what the car will look like when it’s done, what you need for parts and labor to finish, as well as a resulting budget and a realistic timeline based on budget and available manpower.

Once you know that, you can then decide whether you actually want to begin or to make adjustments to make it work. It’s really that simple.

Where it can go a bit sideways is when you order parts and then find something much better or something that you have to have instead (guilty as charged). Or, you massively screw up on the engineering side (not yet) and/or underestimate the labour you’ll need in detail and finish work (by about $20,000 so far).

Mostly, you don’t want to bite off more than you can chew.

The natural tendency is to start ordering interior parts and farming out the engine work while the body is at the shop. You think you’re being smart by multitasking and moving up the completion time, but many people don’t realize that some aspects affect others.

Even more precarious is ordering all that stuff and then finding out the body job is going to cost $27,000 instead of $17,000.

Generally, I’ll wait until the end is in sight with the body before buying anything else . . . at all, because that seems to always come in at way more than you think. You can then make adjustments to stay on budget and move to the next portion of the build accordingly.

I also like to have a sketch to refer to to do all the research on what needs to be ordered and establish a cost. I just write all over that sketch with arrows and notes and checkmarks. 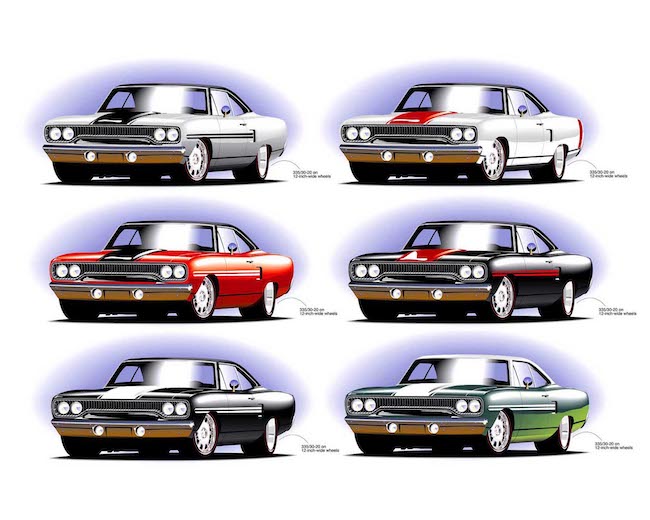 You don’t need to be a professional artist. You can just as easily find a car you like in a magazine and use it for a reference, including the interior and underhood photos. Cut them out and stick them to a big piece of craft paper or cardboard and start making notes, all before you do anything at all to the car itself since you can’t begin until the blueprint is done. That should be your motto.

So, the goal with my Plymouth is to create a modern supercar.

That is to say that it keeps its 1970 body, but everything mechanical is upgraded to modern specifications. At least as much as I can get or afford.

The idea is to be able to put the car on a road course and hang with modern sports cars. Is this even doable? After all, I’m not just talking about bolting on new parts. I’m talking about reengineering the old crock with parts that all work together. Who can afford to do all that research and development? I can’t, but as it turns out someone already did it and you’ll find out about that in an upcoming installment.

Sadly, this meant the tubular K-frame I purchased (and wrote about in a previous installment) found its way to eBay since it did not fit with the goal. And that’s really the beauty of a goal, isn’t it? To keep you on task and keep you from going broke buying stuff you don’t need.