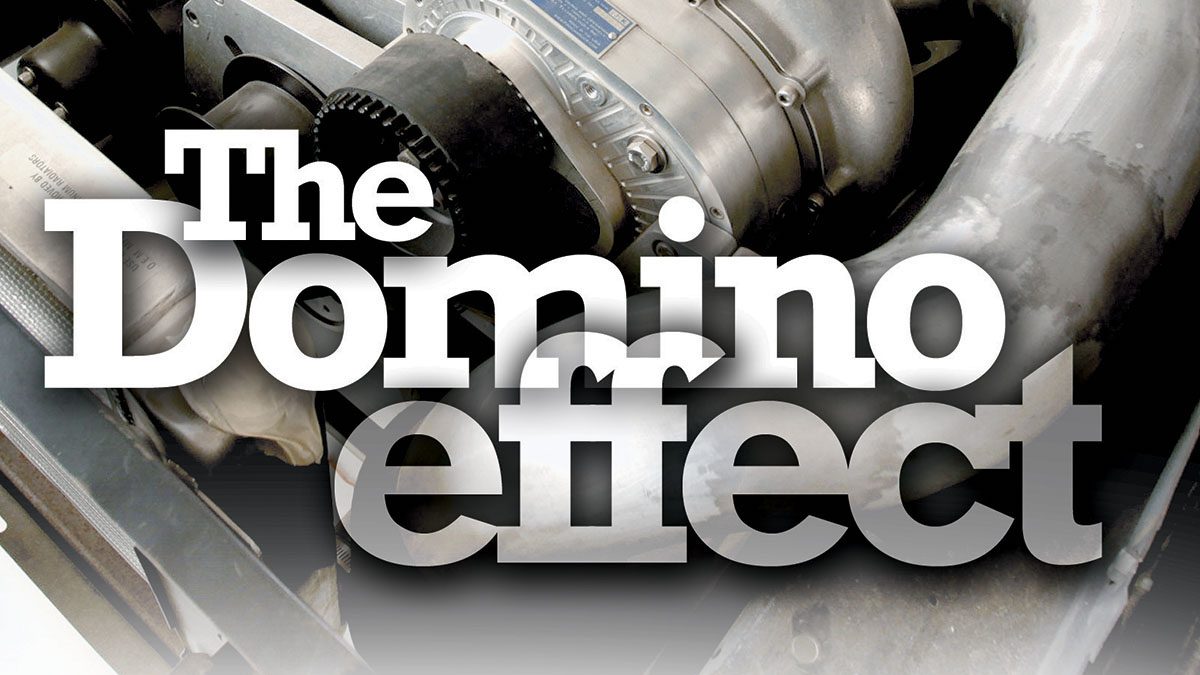 The drive for 1,000 horsepower means bringing the rest of the car along for the ride

In the spirit of doing things twice for no apparent reason, welcome to the engine-build program for the 1970 Plymouth.

Why we continue to build two engines for project cars — we built two for the 1965 Mustang – and two rear suspensions, too — possibly has more to do with boredom than anything else. Except that for the Plymouth, we actually built one engine twice, then built a completely different one.

The first engine was developed years before by Shediac-based builder Paul Arsenault. While 449 horsepower and 453 pound-feet of torque from the 6.0-litre (360-cubic-inch) V-8 was completely satisfactory, especially given the stock nature of brakes, chassis and suspension, it’s natural that the engine would evolve as the goal of the car evolved, using newer and better technology that became available.

The second time into the engine — which had only made about 20 runs on the dyno for tuning purposes and never was put in the car — was to replace the flat-tappet camshaft with a modern roller design and to freshen things up with new piston rings and connecting-rod and crankshaft bearings.

Back on the dyno, Arsenault tuned it to 529 horsepower and 474 pound-feet of torque with a great sound at a peak of 6,600 revs per minute.

I have since discovered that I really need to stay off Ebay and well away from car magazines once we’ve completed an engine.

Even better, we should build the engine at the end of the project rather than at the beginning.

It was right about that time that Chrysler began selling its ‘siamese-bore’ R3 race block with steel main-bearing caps held in place by four bolts to support the crankshaft. The standard production engine block uses iron caps and two bolts. The real beauty is that, because the cylinder walls of the race block are so thick, they can be bored out a long way: about a quarter of an inch past the standard bore.

The R3 race block is based on the external dimensions of the small Chrysler 273-360-cubic-inch V-8, but we surmised that with enough cylinder bore and an increase in crankshaft stroke, we could get to 7.4 litres, or 440 cubic inches, which might be a familiar number to some. That’s 440 cubic inches of displacement from an engine no larger than a typical 318 or 340/360.

What’s interesting is that after we finished this combination, Chrysler began to offer a drop-in crate engine with the same displacement, but using a less-expensive engine block and internals. Obviously we were onto something.

Arsenault and I were shooting for 650 horsepower when the plan derailed. Or, rather, I derailed the plan. Again.

What if we added a supercharger?

I began looking at options and contacted the Supercharger Store, which sells Procharger fit-under-the-hood superchargers. Bob Woods confidently predicting 900 horsepower on pump premium fuel with this seemingly simple bolt-on system that pushes additional air into the engine. That really got our attention.

So, we began mapping out a new strategy and the cost.

Fuel injection would provide the best tuning ability, but we would have to modify an off-the-shelf intake manifold to accept the injectors. Cylinder-head selection was challenging because very few aftermarket pieces built for the 273-360 engines could handle the airflow required by 440 cubic inches of displacement, and certainly not a 440 that would be force-fed as much as 2.5 times the ambient air by a supercharger.

An important consideration is that the rest of the driveline — and the whole car, for that matter — needs to be up to the task of the extra power.

We felt that 1,100 horsepower was within reach, which would really make a statement about the project, but what kind of transmission would support the power? What kind of rear differential? What kind of engine mounts? And what about brakes and steering and tires?

It’s a domino effect, really, where there’s no point adding a bunch of power that will either break something else in the car or just be too dangerous if the rest of the car isn’t up to the task. Every dollar spent on the engine requires one dollar to be spent somewhere else to support it. 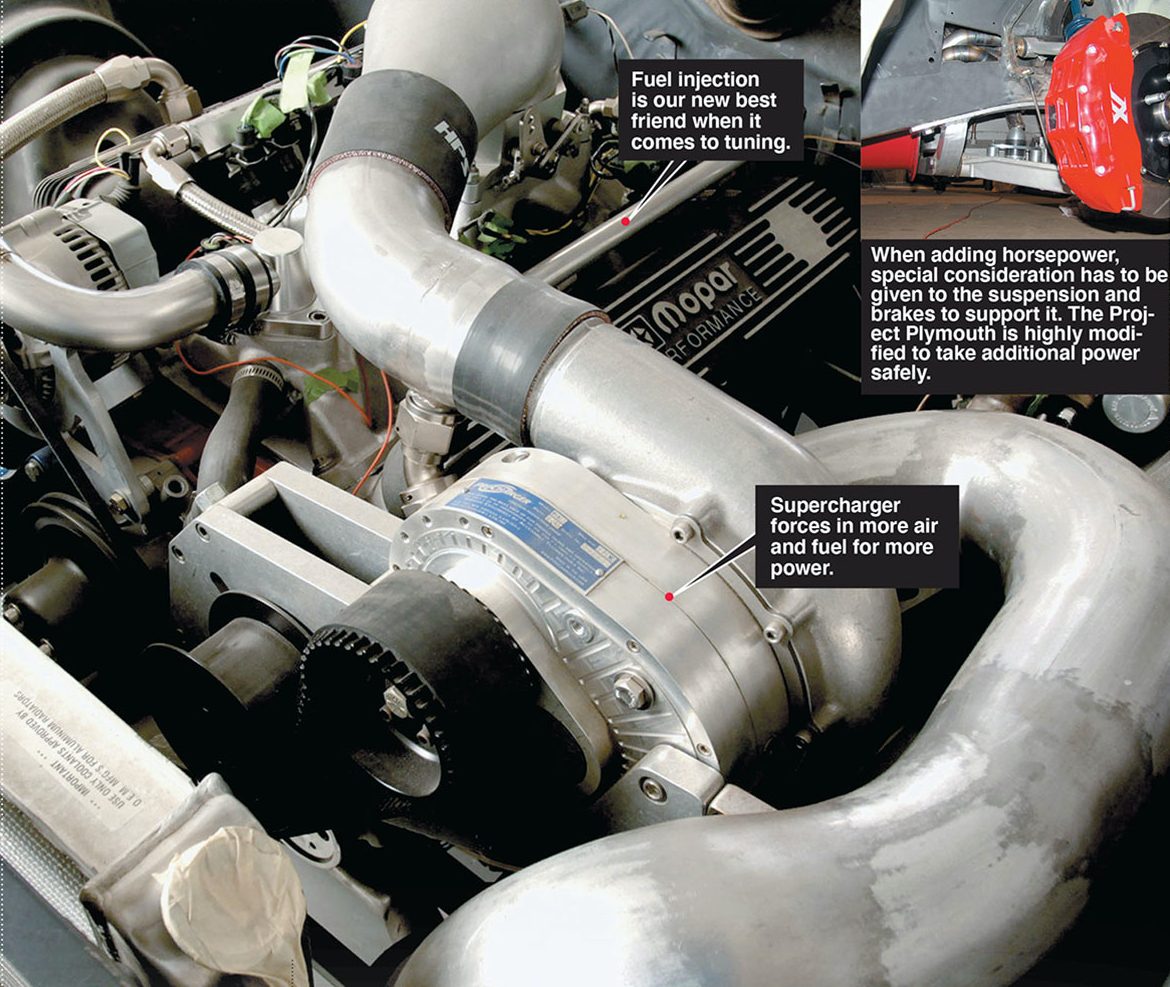 When it comes to the Plymouth’s engine, I get the question of originality quite a bit.

The car began life as run-of-the-mill Satellite and not a more desirable Road Runner or GTX, which means it came with the utilitarian 318-cubic-inch V-8 and not 383 or a 440 big block. As such, I was not defacing a rare car by putting our supercharged 440 small block between the fenders.

If displacement is an issue, why not start with a 440 big block instead of building a 440 small block? Well, the small block is smaller and lighter and weight is the enemy, especially when you build a car to stop and turn. And quite frankly, we wanted the challenge of doing something really different.

There is one potential drawback with trying to be this unique. It’s expensive and, if built incorrectly, the plan could backfire.

Get ready as we start pouring money and time into a massive engine project that, to this day, we half regret. Find out why next time.