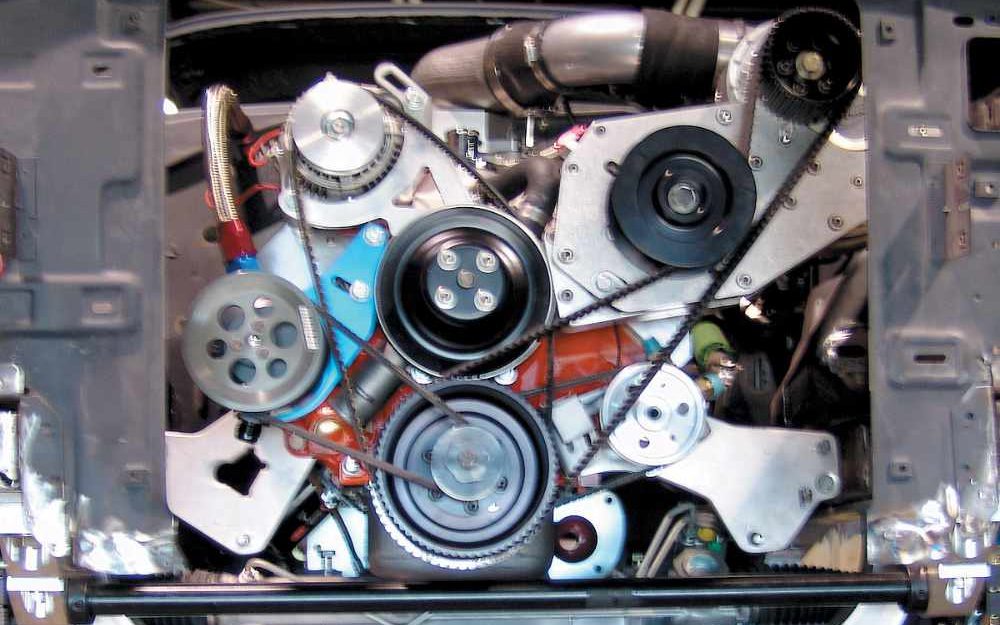 *Part 11 of our series on rebuilding a 1970 Plymouth. Read Part 1 here. Find the rest of the series at the bottom of this post.

There’s a good reason the 1970 Plymouth’s engine is saddled with a supercharger, but not likely the reason you think.

There’s the big power, yes, but for a street engine, adding a supercharger is often a smarter and safer bet than going with a much-larger-displacement engine that doesn’t have a supercharger.

A supercharger is a belt-driven compressor that forces in extra air and fuel to make more power. New vehicles such as the Dodge Challenger Hellcat and Chevrolet Camaro ZL-1 use one.

When a piston slides down inside the cylinder, air rushes in through the cylinder heads (the intake valve) to balance the pressure with the outside air.

If normal atmospheric pressure is 14.7 pounds per square inch, adding 14.7 p.s.i. of ‘boost’ would theoretically double the displacement of the engine, making the 440 act as though it displaced nearly 900 cubic inches. More cubes equals more torque — twisting force — which means more horsepower.

There are several factors that derail this basic math, such as parasitic power loss from spinning the supercharger, power loss through additional heat, and the ability for the engine to actually process double the air and fuel. And that’s 14.7 p.s.i. What about 20 or 25 p.s.i.?

Yes, building a supercharged engine can be complicated.

So, dollar for dollar, we could have made similar peak horsepower and torque from a larger-displacement engine that was not supercharged. It might have even made fitting things under the hood a little easier, and for drag racing it might have been our approach, too.

But on the street, things are a little different. Contrary to Vin Diesel, life isn’t lived a quarter mile at a time. There are red lights and stop-and-go traffic and jaywalking pedestrians.

To make a non-supercharged engine achieve similar performance to our supercharged engine, it would have to displace about 600 cubic inches — about 10 litres — and have a high compression ratio, likely in the 14:1 range, which necessitates racing gasoline that’s available only from the local drag strip or a big drum from a speed shop.

It would be very rough running — idling at 1,200 revs just to keep from passing out — and it would likely overheat at every red light.

As a power adder in a street-driven car, the beauty of a supercharger is that it’s only providing power on demand. Just driving around, the engine is a docile low-compression V-8 that runs on pump gas with no overheating/idling/racing-gas issues.

Then, when you put the spurs to it, that’s when you get the power you asked for.

The trick is in the combination of compression ratio, cylinder-head selection, camshaft selection, fuel management, supercharger (or turbocharger) type and ignition management, all of which is usually well beyond the scope of the normal enthusiast.

While it’s possible to add a supercharger to an existing low-compression (9:1 or less) engine with positive results — although with a higher risk of catastrophic failure — the best way is to plan out the whole thing as a package with the intended use in mind and then collect all the necessary parts.

Of course the parts need to be tough enough to withstand times when the engine is at full power. In a street engine making 1,000 horsepower, full throttle doesn’t happen very often, perhaps 0.01 per cent of the time or less, but the engine still has to be built to do that.

Despite taking several months with engine builder Paul Arsenault from Shediac, N.B., to dial in the combination of parts for a durable, fun and powerful package, there were still a couple of missteps.

Right off the bat, I bought the wrong engine block.

It was exactly what we needed but it would not accept a roller camshaft — actually, the roller lifters — so we had to order a flat-tappet camshaft instead.

I ordered stock-length connecting rods when I should have ordered shorter ones to give more room between the piston pin and the piston tops. As it was, there wasn’t enough aluminum in the top of the piston to make a big enough dish to get down to 8.8:1 compression, which meant dropping the piston in the bore, and that can have effect on ‘quench’, which a supercharged engine depends upon to make optimum power.

OK, I really don’t expect you to follow any of that, but you get the idea that many factors create and affect many other factors, which is why finding people with knowledge of projects like this is so important, before ever buying the first part.

A supercharged — or a turbocharged — engine makes an excellent choice for the street, a package that’s durable, fun to drive and doesn’t necessarily require high-octane racing gas.

Whenever boost is added, the chance of fuel detonation increases and with our 20 p.s.i., it’s inevitable. Next time, we’ll get into a couple of sub-systems that allow 1,000 horsepower on pump gas.

*’Belts’ (lead photo): A supercharger adds an extra challenge if clearance is tight at the front of the engine. We have four separate belts to run the accessories all of which add a little more overall engine length. We would have preferred a single serpentine belt, but since none of our accessories are in the stock location, no company makes a system. A turbocharger offers more installation flexibility, but there’s a lot more custom exhaust work to do.