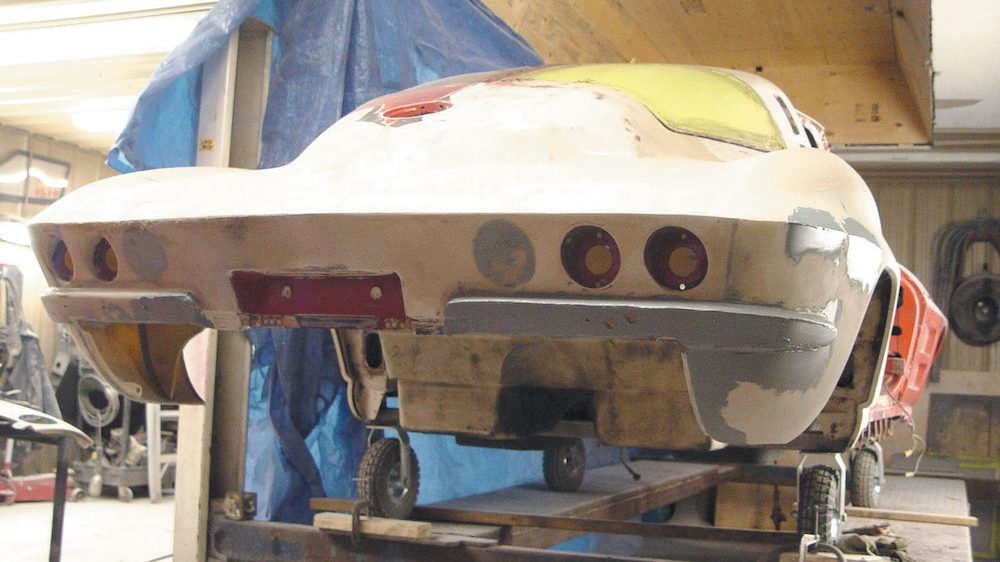 Looking at the bare frame of the 1963 Corvette in the East Coast Garage, it’s fair to say that Jeff Melnychuk is committed to this project. Now he needs the mettle to handle whatever comes his way.

You’ve heard that phrase countless times. But when you’re pushing 400 horsepower through a 1963 Corvette, it had better have great bones, because that’s what holds the whole thing together.

An important benefit to working on a car with a full frame is that it can be separated from the body to be worked on independently.

The 1970 Project Plymouth is of unitized construction that integrates areas such as the trunk, floorpans and firewall into the vehicle structure. The benefit, usually, is a lighter vehicle but, since everything attaches to the body, there’s not much else you can do while the body is in the shop being worked on.

Not so with the 1963 Corvette. With the bodywork taking several months, work on the frame was underway in another area of the shop. New and reconditioned suspension and steering parts were being added and the engine and transmission were installed.

With a unitized car like the Plymouth, such work goes on beneath it. With the frame of the Corvette on stands, we were able to work over, under, in and around it without it tying up a lift and without always working overhead. Half the car can be built this way and then the body dropped on before heading to the paint booth.

The most common question anyone asks about a frame is whether it’s straight. That’s valid.

But rusted and weakened mounting points for suspension parts as well as the powertrain are sometimes overlooked. You can get a good idea of the condition just from a cursory look at the frame. If it looks rusty on the outside, it’s probably rotten on the inside.

This Ebay find was complete and running and the photos looked decent. Given the fact the Corvette was a major disappointment when it arrived (misrepresented by the seller), I was plain lucky that the frame was coated in Idaho dirt and not rust.

Frame off, you can go over everything with a fine-tooth comb. But rent a U-Haul to move the big stuff to various shops

However, with the frame separated from the rest of the car, it’s the perfect opportunity to go over it with a fine-tooth comb, once all the various parts and pieces have been stripped off, tagged and put on shelves or into bins.

On an older car, there are really not a lot of parts, especially if you remove the subassemblies such as suspension and brakes in their entirety for examination later.

After a good pressure washing, the frame and numerous bins of parts that we knew we were going to be reused were loaded into a U-Haul cube van and driven to a sandblasting shop.

Now, all this seems straightforward, but to anyone who has restored a vehicle, moving large parts around is no easy task, which is why the U-Haul cube van is one of my best tips.

I arranged to leave the U-Haul at the sandblaster’s shop overnight so that when the job was finished the next day, I could just load it back up and return the frame to the shop. Total cost was about $100 as I just needed to rent it overnight and not twice for two separate days.

Leaving the van at the sandblasting shop also committed them to finishing the job on time. They didn’t want to be stuck with a giant U-Haul truck blocking the parking lot for more than a day.

To sandblast or to powdercoat. Ah, that is the question.

Once back at the East Coast Garage, our Shediac-based Corvette restorer Mike Poirier could fully examine the bare metal for any repairs that were needed, and re-weld any seams. This took several hours as more seams were welded, beyond what the factory had done.

There are other methods for stripping the frame, such as chemical dipping, but there was no such facility around and we were unsure how to properly protect the internal surfaces that were impossible to access with a spray gun.

The final decision came down to what we would be doing with the Corvette. Sandblasting a frame in good condition seemed appropriate when the car would be garaged all the time and used only on sunny summer days.

We could have powdercoated the frame. Instead, we chose to paint it with a tough single-stage (no clearcoat) urethane in semigloss black, after a thorough cleaning with solvent to remove sand residue and grease that would otherwise prevent maximum adhesion. Powdercoating involves wafting on plastic powder and then curing the frame in a big oven. The decision to use powder or liquid paint is up to you, but we were split on the merits of each and chose the less costly route.

From here we can begin looking at the various subsystems to see what needs to be repaired, replaced and refinished. Then, begin the reattaching process and watch as the 1963 Corvette takes shape.