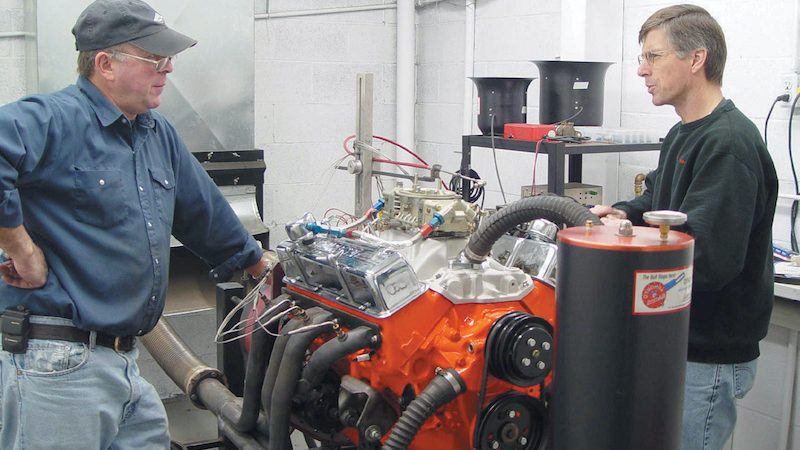 Most people geek out over horsepower figures, but as you’re about to find out, you don’t drive the engine dyno

OK, we didn’t blow anything up. And that’s a good thing when dealing with a nearly-six-decade-old original Corvette engine and high stress levels.

How much would the car drop in value if we trashed the original engine? No one wants to want to find out, so we entered the morning of Dyno Day at Sussex Engine Ltd., in Sussex, N.B., gritting our teeth a bit.

In the previous installment of the restoration series for the ’63 Corvette, we were armpits deep in camshaft selection, cylinder-head porting and block preparation. Lots of technical stuff.

The purpose of this story is not to show how to rebuild an engine in 1,429 easy steps, but rather to highlight the experience we had after we got the whole thing together.

Many people would consider a trip to the engine dyno shop to be extravagant.

Sure, it might cost upward of $1,000, but when you leave at the end of the day, you’ll know exactly what you have (with paperwork to prove it). You’ll know that it runs right and that there are no pesky leaks in odd places.

For example, trying to fix a leaking rear main seal while the engine is back in the car would mean pulling the engine back out of the car. And something will get scratched in that process, no question, like a fender.

If a camshaft lobe is wiped out in the first five minutes while running in the car, you would be doing that repair with piles of blankets over the fenders to prevent scratches and nicks.

Better to find out before putting the engine in the car, eh?

And what about tuning? On the engine dyno, you get all kinds of data to help you dial that sucker to within an inch of its life, by people who actually know what they’re doing. In this case, engine builder Paul Arsenault from Shediac, N.B., made the trip to Sussex with us.

Suddenly, $750-$1,000 for a dyno day seems like a deal, especially since you don’t have to spend much — if any — time and money after that trying to make it run its best.

Isolating and testing only the engine is a safer way to analyze horsepower, torque and all kinds of other geeky goodies

After properly breaking in the engine by running it for 20 minutes at 2,500 rpm, we put about 30 ‘pulls’ on it and in between each pull we analyzed the data — horsepower, torque, exhaust-gas temperatures and fuel use — and did the appropriate fiddling with timing and carburetion.

We even tested the original intake manifold and carburetor before switching to a more modern setup that we planned to use in the car. We just wanted to know if we were ahead or behind.

Yes, you can tune a car on the drag strip or chassis dyno where the whole car is strapped in, but there’s more risk since the whole car and its related systems are all called into duty at the same time.

Essentially, there’s more to go wrong. And blow up.

So, the dyno day begins rather simply: by showing up at the dyno shop with the completed engine and everything needed to make it run, such as spark-plug wires, carburetor and oil in the pan.

The original 300-horsepower 327-cubic-inch V-8 was rebuilt with original-style high-compression pistons. To keep the stock appearance, we used the original cylinder heads but had them ported for increased airflow by Paul Arsenault. As well, he installed larger intake valves.

An engine is essentially an air pump, so getting air in and out with less restriction also means a hot camshaft, which controls when and how far and how quickly the valves open and close.

It’s tempting to put in a stock type camshaft — to be faithful to the restoration — but since the engine was first put in our 1963 Corvette, there have also been nearly six decades of camshaft development.

Weighing the options, we picked a modern design that improves idle quality as well as low- and high-speed power. Usually there’s a tradeoff between these two, but newer camshafts dramatically soften this compromise to get the best of both worlds. Without getting too technical, the newer designs have steep ramps to get the valves off their seats to maximum lift as quickly as possible.

Unfortunately, we have no real control of combustion efficiency, which is dictated by the combustion chambers of the cylinder heads. All that extra flow volume picked up from porting can’t be fully realized from an ancient combustion-chamber design.

For example, we recently built a Ford engine of similar displacement for the project ’65 Mustang, but we used modern aluminum cylinder heads. It bested the Corvette engine here by a further 89 horsepower and 40 pound-feet of torque, and that was with less cylinder compression in the Ford.

Using the original 50-year-old intake and carburetor on our Corvette engine, we made 349 horsepower right off the bat, which is 49 more than the factory rating of 300. Fiddling with timing and carburetor jetting didn’t help much.

Switching to our newer intake system eventually put us at 391 horsepower with a decent idle, a plump 400 pound-feet of torque and relatively low rev ceiling of 5,900 rpm.

Back at the home shop, we inspected it, changed the oil and parked it in a corner, wrapped in plastic, to wait for the rest of the car to be finished. And there’s a lot of car left to be finished.