Reminiscing about summer car shows and 100 years of Mazda

No one had any idea what to expect of Summer 2020. All of the ways in which people have fun, relax and de-stress seemed to be in jeopardy, due to Covid.

Car shows and meets, major forms of entertainment and socializing for car buffs, looked like they would just not happen. And many of them didn’t.

But, the car scene of Atlantic Canada is resilient.

Classic car and modified car owners found ways to gather outside, keeping distance, providing enthusiasts with plenty of eye candy to look at throughout the summer, despite closures and cancellations.

Car cruises were popular. One of the last of the season took place recently on one of those crisp, autumn days where the leaves seem on fire and the sky is an unbelievable blue.

As we followed along through Nova Scotia’s brilliant Wentworth Valley, behind a gaggle of hot street machines, we realized the vehicle we were driving, a 2021 Mazda CX-5, our press tester for the week, probably wouldn’t garner much attention. 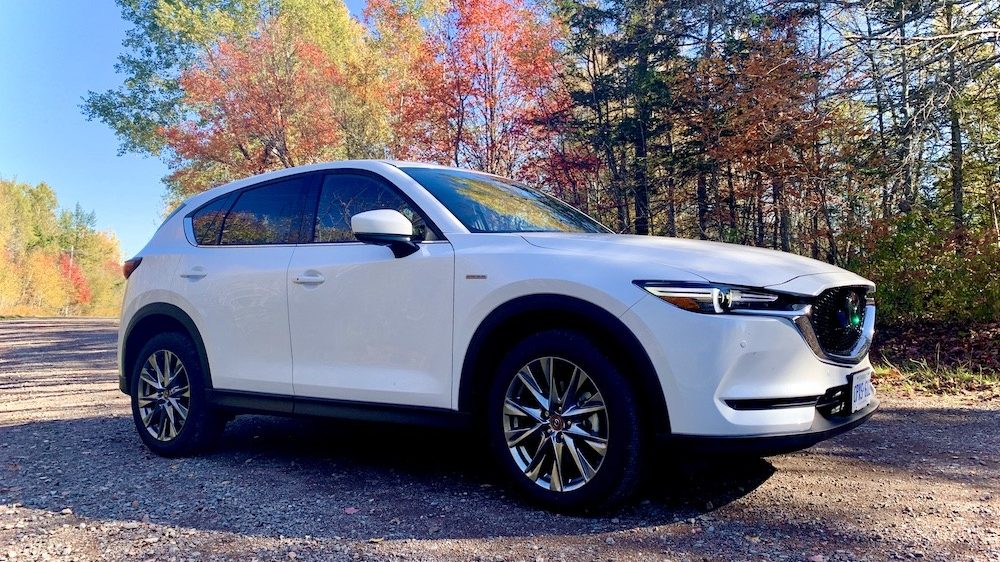 But the premium interior was certainly a comfortable place to reflect on the ways we were able, thankfully, to take part in the Atlantic Canada car scene in this strangest of summers.

We spent many a golden sunlit Thursday evening walking the parking lot next to the A&W on Pleasant Street in Dartmouth. The weather seemed to cooperate week after week. Attendees of all ages kept their distance from each other.

We admired the treasures from bygone eras right up to the current generation of the tuned new-ish cars the 20-somethings are driving.

It didn’t matter whether the vehicles were pristine and show-ready or gnarled and rusty-on-purpose. It was just good to be out, looking at unique cars, like a bright orange 1963 Scout by International, a neat and tidy 1960 Singer Gazelle, or a pretty perfect 1984 Ford F-150 Fleetside. 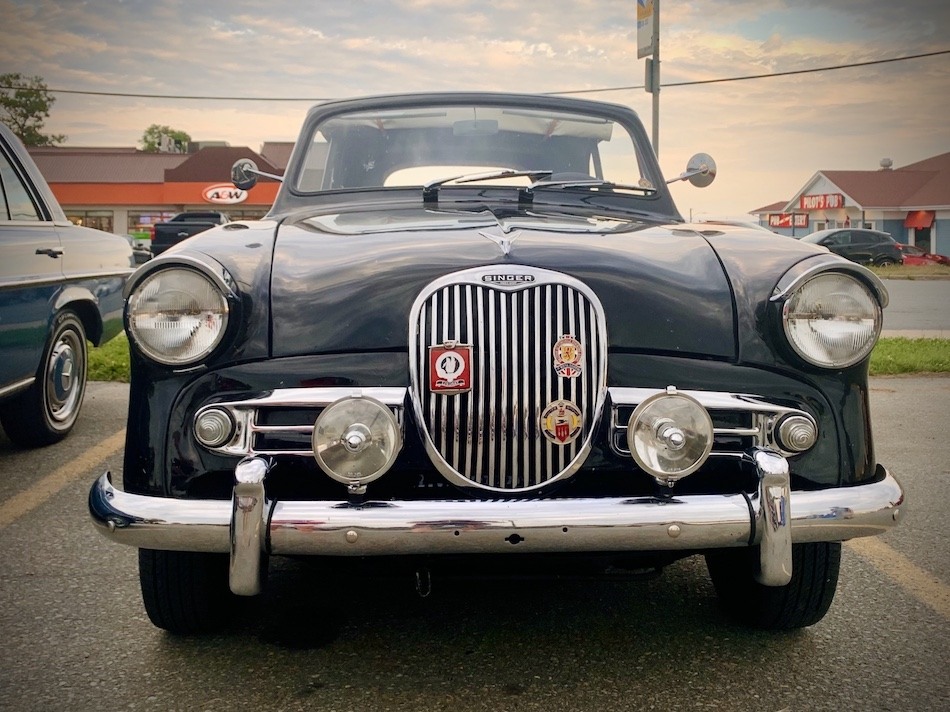 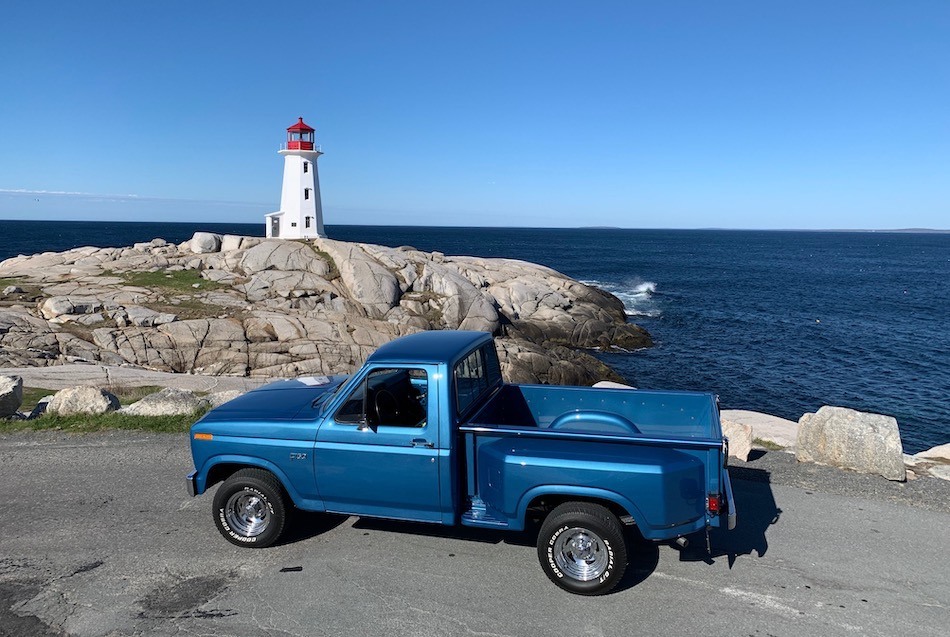 Getting to know the owners and the ever-fascinating stories behind their particular project car was a bonus.

Looking for silver linings during these extraordinary times is a practice we’ve all tried to incorporate into our lives. Using the lengthy lockdown back in the spring to finally finish a long-standing project car and get it on the road is worthy of a ten out of ten score for silver linings. A few car owners spoke of the work being a form of therapy. 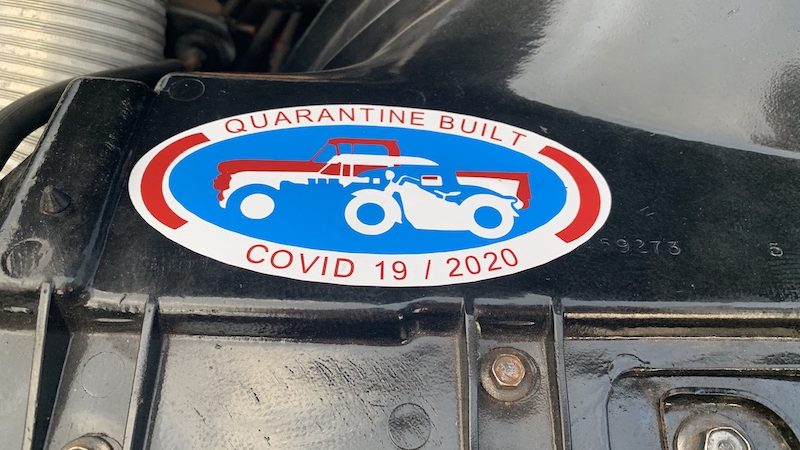 Vernon’s Thunderbird Diner in Hammonds Plains is another fun venue that encourages classic car owners to gather in the parking lot. With delicious food on the menu and a large patio from which you can enjoy the array of vintage metal while you chow down, it was a perfect Wednesday evening activity. 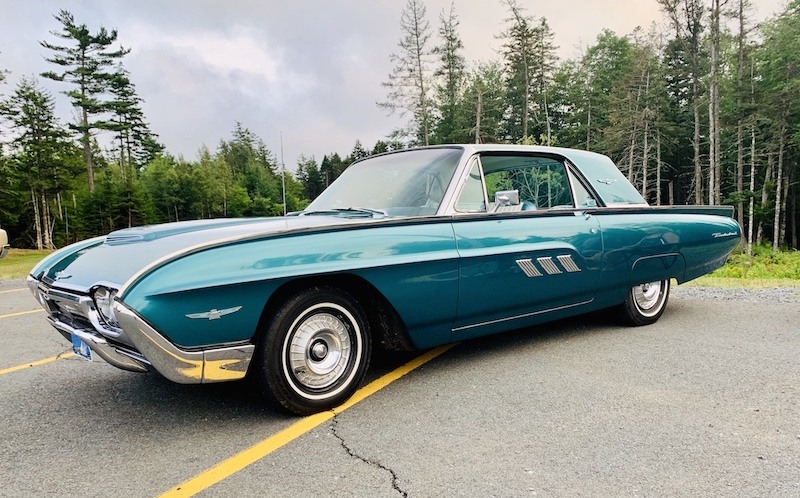 How about a 1975 Avanti II or a 1963 Ford Thunderbird with those yummy fries? 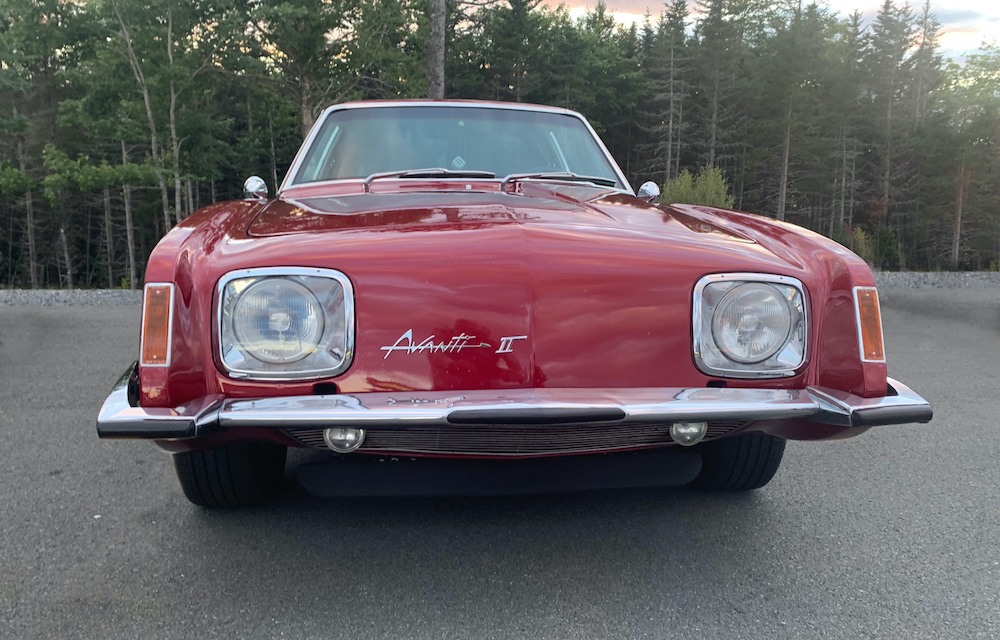 The large grassy area at Masstown Market, almost smack-dab in the middle of Nova Scotia, was our Friday evening hangout. It was a pleasure to meet more intriguing vehicles there throughout the summer. 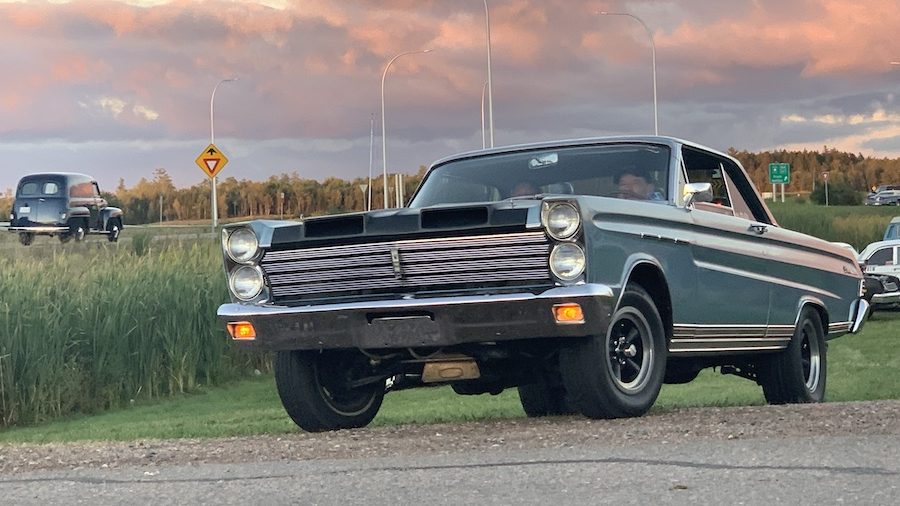 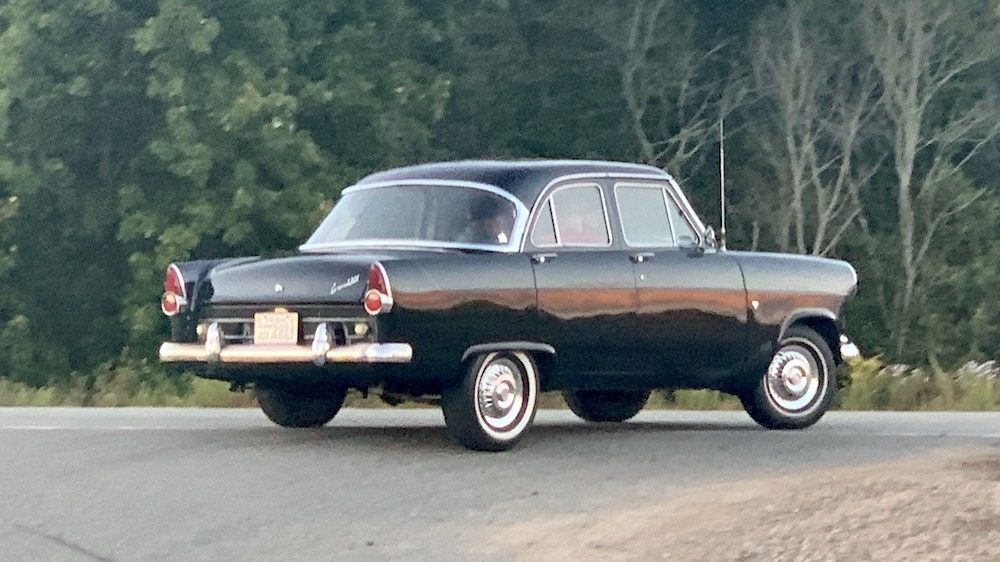 And the Scotia Pine Show and Shine, in Hilden, hosted annually on the third Saturday of September by the Mercury Club of Truro, Nova Scotia, gave us the chance to escape the city on a beautiful sunny day. Besides the impressive assortment of classic and customized rides, the show also attracted a couple of RCMP cruisers. These were not vintage. 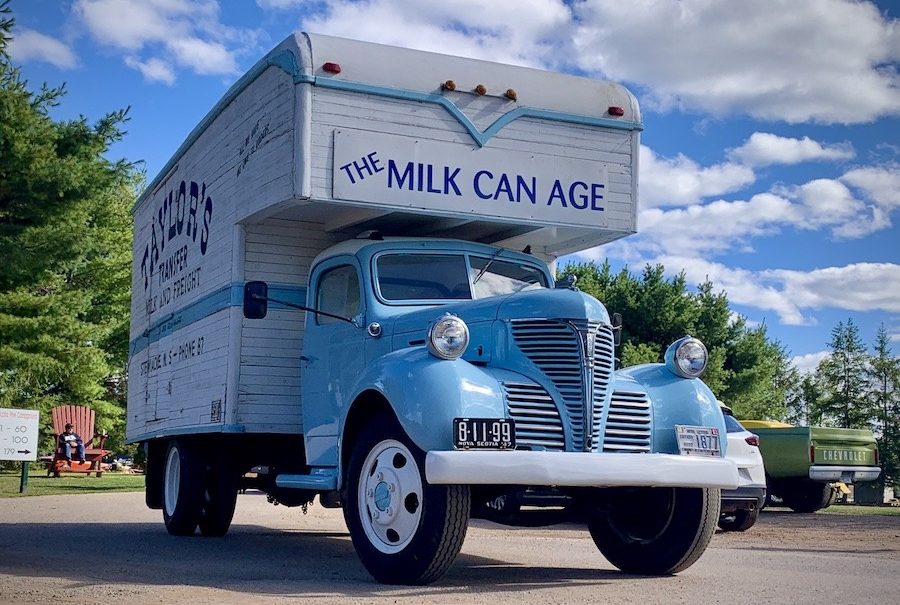 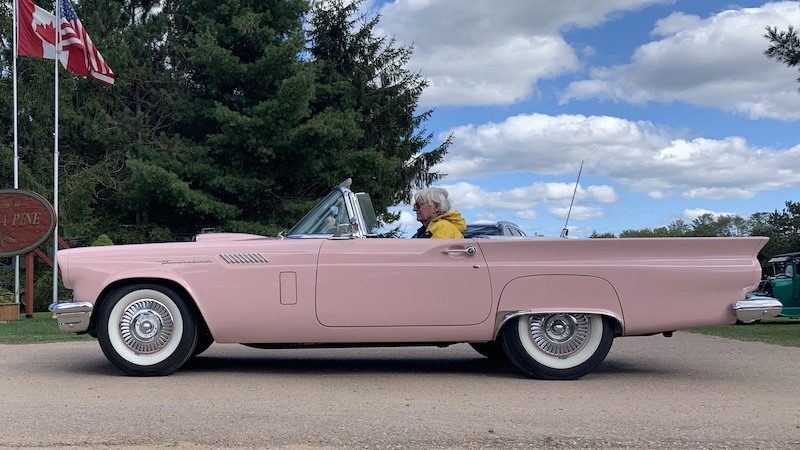 Venturing further afield, we headed to Prince Edward Island where the Brackley Beach Drive-In provided a nostalgic backdrop for about 200 cars during the Brackley Street Machine and Hot Rod Show. Wow!

Then it was off to Petitcodiac, New Brunswick, where the Maritime Motorsports Hall of Fame and the Petitcodiac and Area Historical and Cultural Society put on a Fall Harvest Celebration. The well-attended event featured local vendors selling their wares, workshops in the neighboring community garden, awesome live music and some pretty cool cars and trucks. 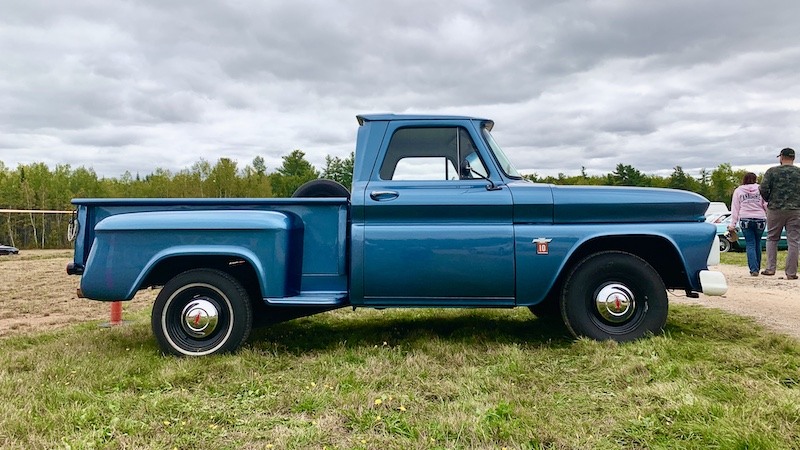 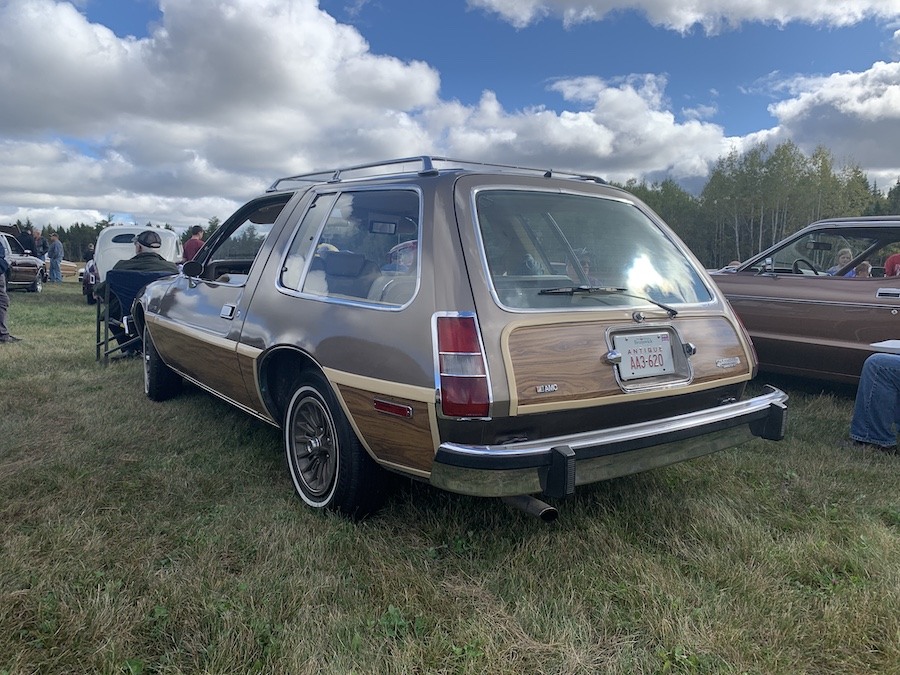 Shameless plug here for the Maritime Motorsports Hall of Fame and Museum, a non-profit organization that keeps Maritime Motorsports history alive and pays homage to its inductees and their achievements. The MMHF is expanding their facility to provide much needed extra display space for the ever-growing collection of Maritime motorsports memorabilia. Donations welcome here.

Meanwhile, back in beautiful Wentworth Valley on the last car cruise of the season, we felt a bit out of place in our 2021 Mazda CX-5. It understandably didn’t get much attention. It’s hard to compete with a dazzling 1968 Ford Thunderbird or the throaty rumble of a 1973 Dodge Dart Sport.

The 2021 Mazda CX-5 is quite special though. And has a unique story. Mazda is celebrating 100 years since its inception in 1920. Yes, the Japanese car industry and car culture goes back as far as that of North America.

The brand is offering 100th Anniversary Editions across many of its nameplates, including the CX-5. These special edition models will feature Snowflake White Pearl exterior paint, a Garnet Red leather interior, red carpeting (very cool!) and 100th Anniversary commemorative badging in all the right places.

The red and white colour scheme is inspired by Mazda’s first passenger car, the 1960 R360, a car that was ahead of its time, not just in its futuristic design, but in terms of engine and transmission technology.

Wouldn’t it be cool to attend a show and shine in Japan? Do you think there are some 1960 Mazda R360 cars still around, perhaps lurking in some barn or in someone’s garage in a half-finished state?

Ah, the project car, a universal pastime around the world.

Now, with evenings getting shorter, temperatures dipping and the dreaded precipitation and salt threatening the roads of the Maritimes, vehicle owners will be tucking their ‘babies’ away for the winter.

We’ll miss seeing (and hearing) them on the streets.

We realize, though, that winter is a time for collecting parts and working on vehicles. So, if you’ve car or truck restoration projects on the go over the winter months, we’d love to hear about them!

And we look forward to Spring 2021 when all those Atlantic Canadian wheeled delights emerge from hibernation once more.