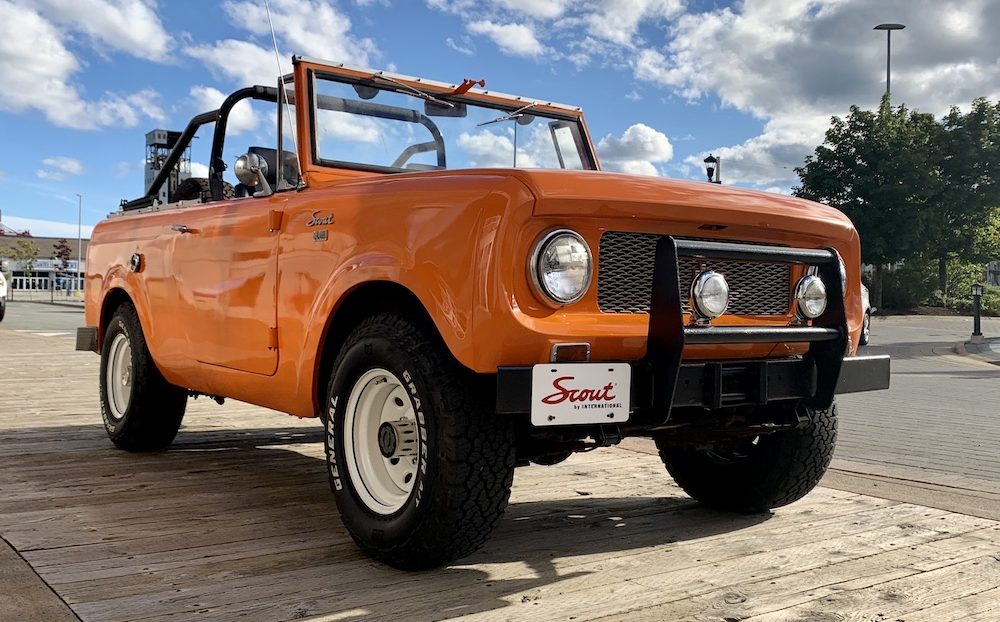 When the bright orange open-air Scout pulled into the parking lot at Woodside last Thursday night, the crowd surged upon it, while the driver, Kathy MacGillivray, muscled her way back into a spot.

You could hear the Oooos and Aaaas from the people that crowded around.

A 1963 Scout by International Harvester is a rare sight and this one is, well, perfect. 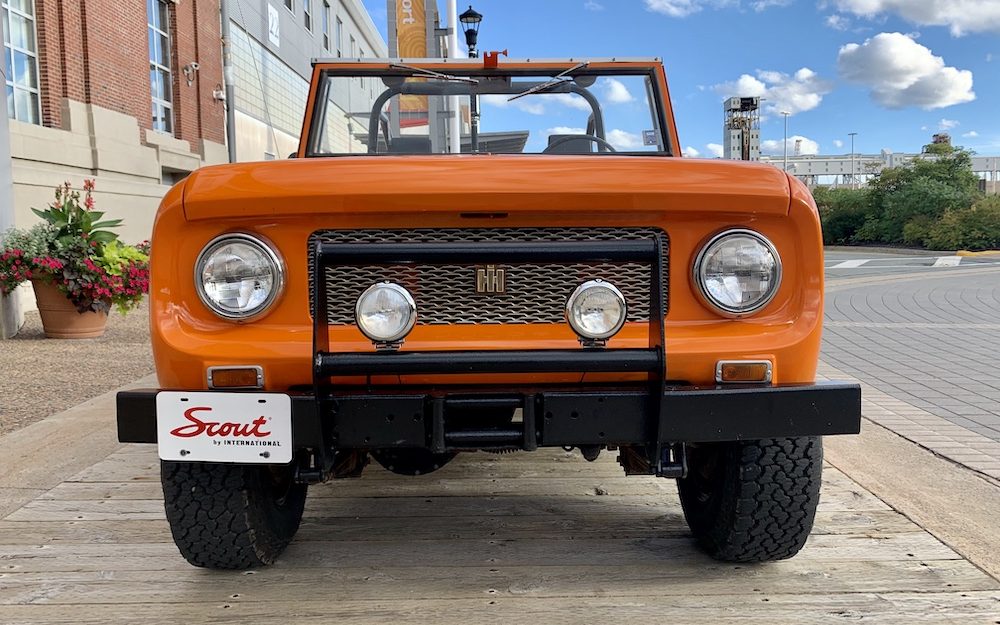 Kathy has had the Scout since April. She found it in Saskatchewan (a rust-free Prairie truck!) and had it brought home to Nova Scotia.

It was a nostalgic purchase for Kathy whose Dad had an orange 1963 Scout on which she learned to drive. She’s so happy about her personal licence plate, which reads ‘McGowan’, her Dad’s last name. 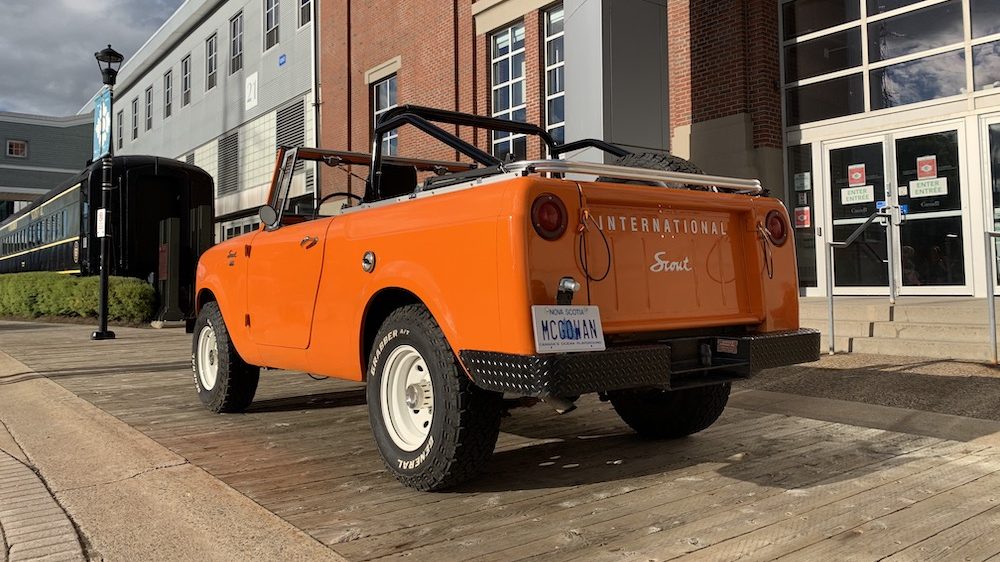 She told us she’s had no experience on a manual transmission since then. Until her baby arrived, that is, and she had to learn how to operate the three-speed floor-mounted shifter all over again. Like riding a bicycle!

Kathy’s outing last week was the first with ‘McGowan’. In her Scout cap and matching orange T-shirt, she looked so excited to be amongst the classic vintage cars and hot rods.

The Scout certainly did not look this perfect when she brought it home four months ago, Kathy says.

She had it completely restored, painted and new tires installed. She is quick to tell us who did the phenomenal restoration: She worked with Barry Tuffs (paint) and Alan Oickle, of Alan’s Upholstery and Auto Restoration, in Liverpool, to bring the 57-year-old SUV to its present pristine condition. 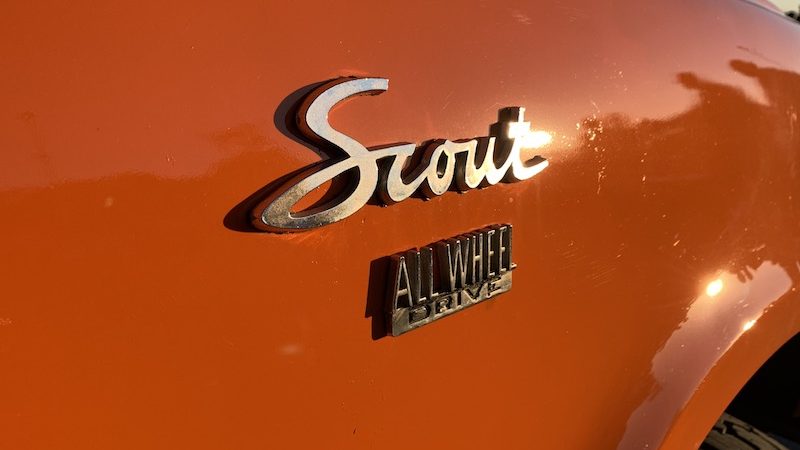 This rare vehicle is from the renowned company, International Harvester. IH which was formed in 1902 by a merger between McCormick and Deering Harvesting Machine companies.

Their tractors, the Farmall and Cub Cadet, dominated the market through the 1950s. From 1926 until 1930, 100,000 Farmalls were produced. The most successful ones, the Letter series, were designed by Raymond Loewy (who also designed the Avanti, a recent East Coaster of the Day).

From 1907 to 1975, International Harvester produced a line of light-duty trucks in direct competition with the Big Three. The light-duty Travelall was similar to the Chevrolet Suburban.

Then came the Travelette in 1961, a crew cab, four-door truck that was the first six-passenger truck of its time.

The Scout arrived in 1961 as a small, two-door SUV, competing with the Jeep. The first-generation Scout 80, like Kathy’s, had a removable hard top, removable sliding side windows, a fold-down windshield, vacuum windshield wipers and the IH logo in the centre of the grille. 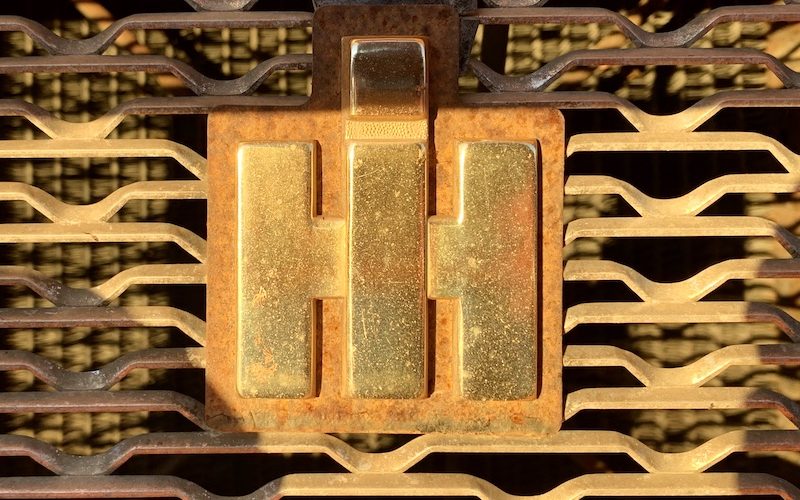 There is no question Kathy loves her Scout. The open-air freedom, the colour, its fun-to-drive character and the feeling of being 16 again, what’s not to love? She wishes she had acquired it years ago. It’s quite a conversation starter, she laughs.

Her sweet driving companion is Nash, an Aussiedoodle, who looks perfectly at home strapped into the passenger seat sporting his Doggles. Did somebody say road trip? 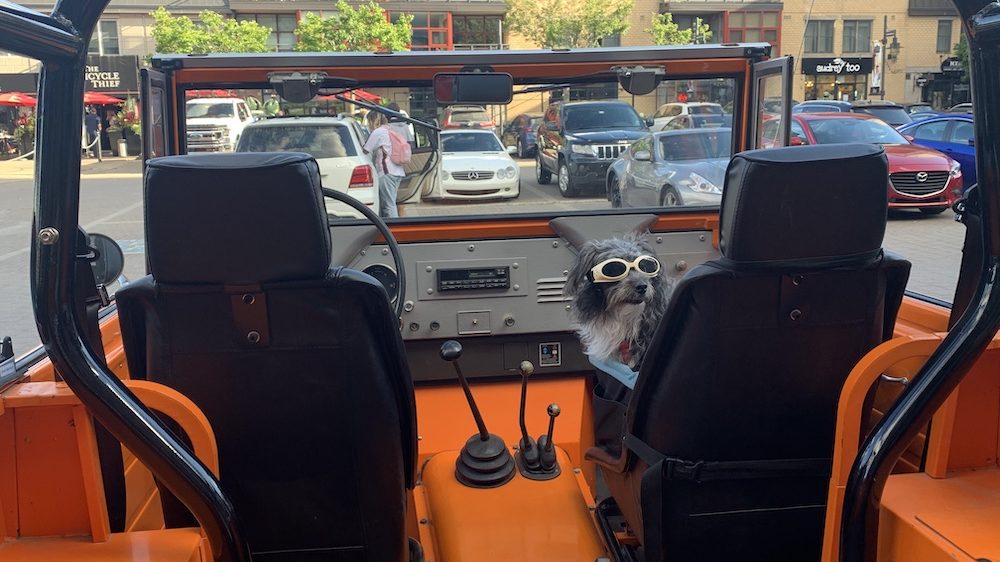 See Kathy’s Scout in person on PEI this Sunday

If you want to catch a glimpse of Kathy’s beautiful orange Scout, come see her (and so many other cool vehicles) this Sunday September 6 at the 7th annual Brackley Street Machine and Hot Rod Show at the Brackley Drive-in (3164 Brackley Point Road) on Prince Edward Island from 10 a.m. until 3 p.m.

We’ll see you there, Kathy, out and about in your Scout!