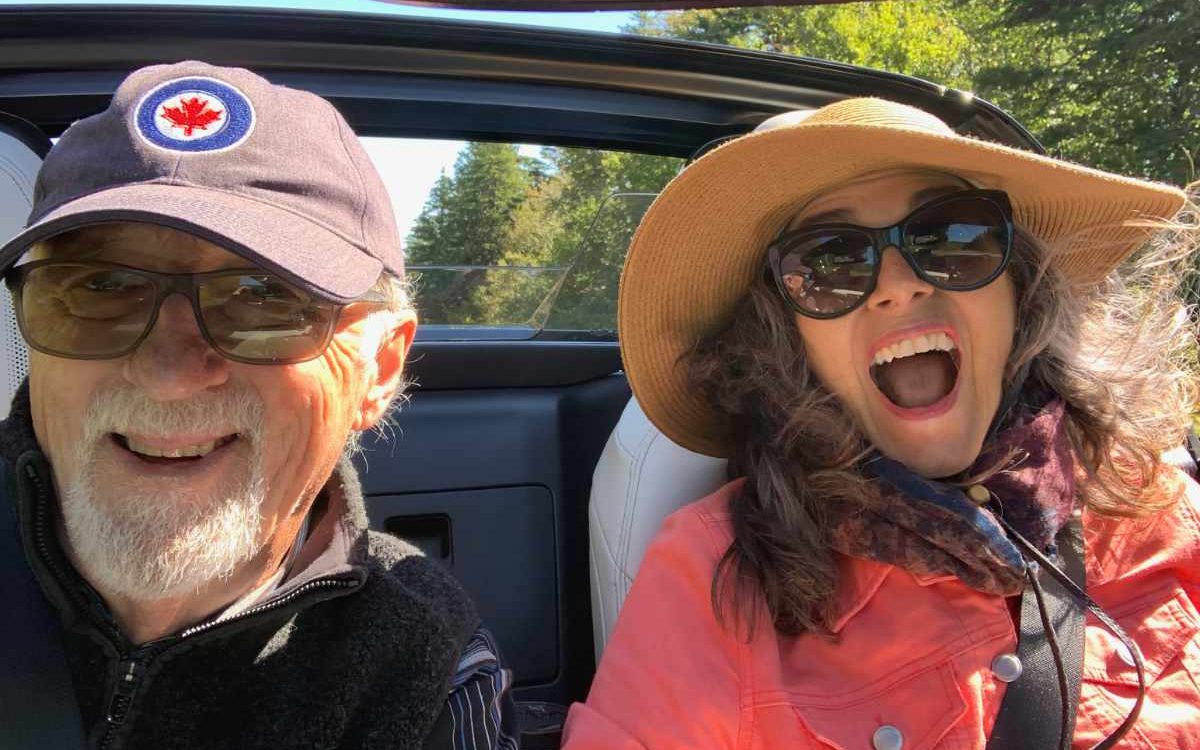 Love is… a topless anniversary celebration (that’s topless as in a convertible, silly!)

When we were invited to attend a late-summer motoring cruise hosted by the Maritime Miata Club in the Fundy National Park area of New Brunswick, how could husband Garry Sowerby and I say no?

We happened to have a Miata at our disposal, a 2021 Mazda MX-5 RF (Retractable Fastback).

The cruise took place the day before our 23rd wedding anniversary so Garry and I decided to make it a full weekend of festivities. Just like a kid whose ‘birthday’ day morphs into birthday week.

We left the rain behind in Nova Scotia and drove the MX-5 to Moncton where the cruise would start the following morning from Magnetic Hill.

Inspired by the Lotus Elan, a 1960s roadster, the MX-5 was a collaboration between Bob Hall, an automotive product planner and former journalist, and Kenichi Yamamoto, chairman of Mazda Motors and leader in the brand’s development of the Wankel rotary combustion engine.

The idea was to build a two-seat sports car that was small, light, modern, minimalistic in design and fun to drive (zoom zoom).

The top-down roadster appealed to those that remembered the bugs-in-the-teeth feeling of driving an MG B, a Triumph TR7 or the Fiat Spider. Those iconic convertibles had stopped production about 10 years before the appearance of the MX-5 Miata.

The reported average age of the Miata buyer is 60, which makes it sound like a boomer car. Well, maybe it is. But the Miata has enough rally and racing cred to charm a range of ages. 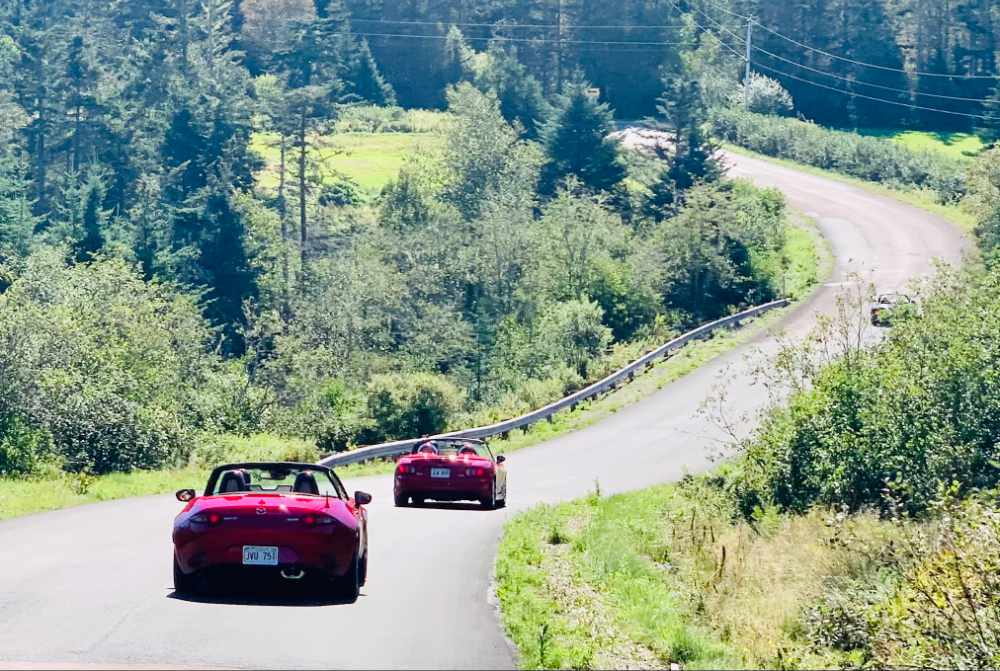 The approximate 50:50 front/rear weight distribution resulted in a well-balanced, great handling car that has kept drivers and owners, gearheads or not, coming into Mazda showrooms and poring over classifieds.

It’s no wonder the Miata, with over 1 million units sold worldwide, has a Guinness World Record as the best-selling two-seat convertible of all time.

The fourth generation MX-5 we were driving, courtesy of Mazda Canada, who has an admirable history of supporting and encouraging activities and cruises for Miata Clubs across the country, was eye-catching in its deep crystal blue.

The 13-second dance performed by the retractable roof to lower or rise got everyone’s attention.

Who says sharing a suitcase can’t be sexy?

Turns out, the 2021 MX-5 was the perfect vehicle for our romantic getaway. You can’t help but sit close to your driving partner. And you might need to share a suitcase. Sexy.

Obviously, trunk space is at a premium in such a small car. I had a pang of jealousy when I saw the comparatively ‘spacious’ trunk of a 1999 Miata at the gathering.

I could have brought that second pair of shoes, darn it!

The cozy cockpit forces you to jettison unnecessary items quickly. Is that coffee cup empty? Get rid of it. Done with that napkin? It’s gotta go.

Our hosts, the Maritime Miata Club, celebrating its 20th year, boasts about 90 vehicles with members from New Brunswick, Nova Scotia and Prince Edward Island. Outings during the topless driving season are many. They usually include a cool drive route on the exciting back roads of the Maritimes, interesting places to stop and take in the sights, and a meal together.

Rick Wood, a good friend of ours and member of the Maritime Miata Club, pulled the stellar event together, complete with a corn boil and barbecue at the Maritime Motorsports Hall of Fame and Museum when the drive ended.

As if ordered, a perfect September day dawned with brilliant blue skies and a warm golden sun.

Of course, Garry and I were plying the streets of Moncton by 07:30, looking for a car wash. Bugs spattered across the grill? Not sexy.

Eight cars departed Magnetic Hill at 09:00 sharp, cruised through downtown Moncton (when you’re in a convoy of much-loved Miata roadsters, you look like a Somebody), crossed the Petitcodiac River, then wound our way through charming Hillsborough and breathtaking Hopewell Cape.

From Riverside-Albert, we headed toward Harvey Bank, where the historic salt-shaker Anderson Hollow Lighthouse stands guard over the Shepody Dam, the first of five tidal dams constructed in 1956 by the Maritime Marshlands Rehabilitation Administration (MMRA) across major rivers flowing into the Bay of Fundy.

Stopping and shopping at the whimsical Studio on the Marsh, established by renowned wildlife artist, Lars Larsen, is a must.

Each stop was an enjoyable exchange of pleasantries and jokes with fellow drivers. Most were couples. Everyone had a story of how they came to own their Miata, memorable road trips they had taken in them and the things they loved about their sweet summer sports car.

All but the first of four generations of Miata were represented.

On the twisty, tortured climb up the side of the mountain to the lighthouse at Cape Enrage, the MX-5 was one fun vehicle to throw into the corners. A responsive shifter and wicked hunkered-down handling makes driving it a pure thrill. I think that’s the consensus no matter what generation of Miata.

After taking in the whipping wind, vast vistas and roiling Bay of Fundy far below the lighthouse, it was on to spectacular Fundy National Park.

Garry grew up in Moncton and this beautiful rugged area figured prominently in his childhood. The phenomenal Bay of Fundy, with the highest tides in the world, has carved an other-worldly landscape of impossible cliffs, chocolate-coloured rivers and creeks and swaying marsh grasses.

Garry and I agree that our romantic rip through this region rates in our top five drives on the planet!

Rolling top-down into the Maritime Motorsports Hall of Fame in Petitcodiac, wind-blown and sun-kissed, we felt relaxed and revved up at the same time. No surprise the word ‘Miata’ means ‘reward’ in Old High German.

What a lovely, rewarding day! Our warm thanks to our host, Rick Wood, the attending members of the Maritime Miata Club and the Maritime Motorsports Hall of Fame and Museum for helping us make a truly special anniversary memory.

And here’s another romantic story involving a Mazda MX-5 Miata by Kevin Harrison. 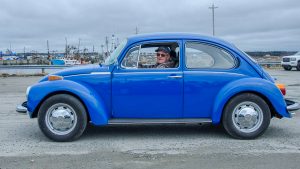