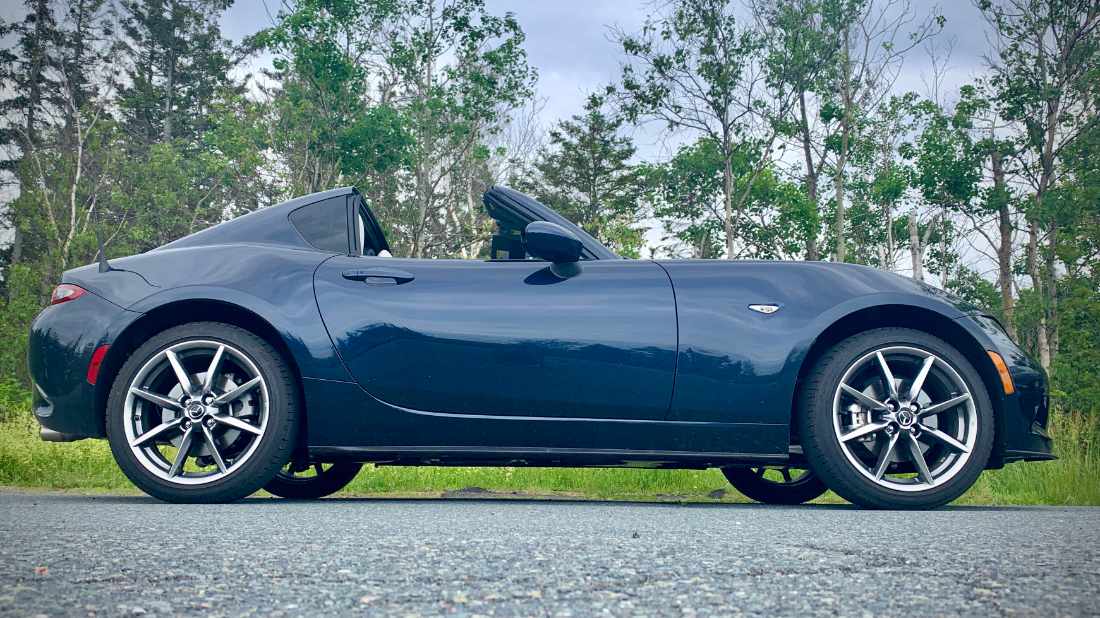 Styles and tastes change with time.

In the automotive world, pickups and crossovers have become the hot favourites. Station wagons and sedans have falling from favour. Sports cars have languished as well.

Back in the day, affordable two-door, two-seat cars with a removable top were everywhere. You could choose from British, Italian or Japanese manufacturers.

I leave it to greater minds than mine to explain the decline in popularity of fun-to-drive two-seaters. Only one remains – the Mazda MX-5.

Don’t count me among the hordes who have turned away from small, light and lithe vehicles designed to encourage and reward. I have been a fan for more than half a century and have had a weak spot for Mazda’s little sports car for more than 30 years.

In 1989, prior to shipping the first batch of Miatas, as they were known then, to North America, Mazda sent a few pre-production models, and a group of engineers halfway across the Pacific – to Hawaii.

They invited journalists from all the big American newspapers and enthusiast magazines, as well as a few Canadian scribes, to drive their new sports car and provide feedback. They set up a high-speed autocross or gymkhana on the vast parking lots surrounding Aloha stadium.

From those early days the Miata/MX-5 became the best-selling sports car of all time.

It brought reliability, and quality to a segment previously the exclusive domain of British and Italian car companies. Miserable quality and reliability, combined with tougher crash, and emission standards spelled the end for affordable European sports cars.

The tiny Japanese company, with a focus on engineering, and driver enjoyment, knew there were consumers around the world who wanted a small sports car, and took advantage of that opportunity.

Since that first generation, the MX-5/Miata, has grown slightly but lost none of what makes it so much fun to drive.

The extra size and weight necessary to comply with crash and other safety standards has been offset by additional power. The first Miata amused and impressed with only 115-horsepower. The 2021 MX-5 has 181 horses under the hood.

The latest MX-5 boasts an array of safety features not-yet-invented when the first generation came upon the scene. It monitors the adjacent lane for other vehicles, warns of traffic coming from either side when you are reversing, or if you wander from your lane.

Fail to notice traffic or vehicle slowing or stopping in front of you? It will automatically apply the brakes. Not only do the LED headlights provide excellent illumination, they also ‘turn’ in the corners and automatically adjust for height.

What has not changed is the sheer driving delight the MX-5 provides.

This is one of the most enjoyable experiences you can have on four tires. It responds to every input with uncanny immediacy and accuracy. The steering is nothing short of telepathic.

Time to erase some of that speed you were enjoying? The brakes are progressive and powerful. The six-speed manual transmission – remember those? – remains a delight. Changing gears requires a simple flick of the wrist.

Mazda says sports car owners spend as much as 80% of their drive time with the top up. The first-through-third generations were thus available with a detachable solid roof, power retractable in the most recent versions.

In 2017 Mazda introduced the RF (Retractable Fastback) version of the MX-5. The top consists of front, middle and rear sections plus a glass rear window. The four-piece roof section folds into the trunk in a 13-second ballet, taking up no more room than the canvas top of the regular model.

The RF version of the MX-5 is obviously a better foul-weather friend, relatively quiet with the top in place. With it stowed, it is possible to carry on a conversation, but there is considerable buffeting at higher speeds. The fixed buttresses over your shoulders results in a large blind spot.

The RF version, with manual transmission, in Grand Touring trim comes with a host of goodies to enhance the driving enjoyment: unique suspension tuning, limited-slip differential, front tower brace and Bilstein shock absorbers. The normally-aspirated engine provides instant and linear response and the six-speed manual gearbox is the best in the industry – at any price point.

The 2021 Mazda MX-5 is all about enjoyment, the smile it puts on your face. This little car makes you seek out the long way home or a convoluted route to the store.