Rear suspension: 1965 Mustang needs its rear end narrowed, which may seem extreme, but stance is everything. In Part 6 of his series on rebuilding a 1965 Mustang, Jeff Melnychuk finds out that anything worth doing well is worth doing twice, apparently.

Don’t you just love it when a plan comes together, only to have to tear it up and start all over?

Beginning with a goal and a plan, all we had to do was execute that plan. And this part of the plan involved putting down that just-right stance.

With the 2004 Mustang Cobra wheels cut apart and narrowed to fit the 1965 Mustang, there was one more major hurdle and a bunch of fine-tuning. Well, as much fine tuning as one can do with leaf springs, anyway. 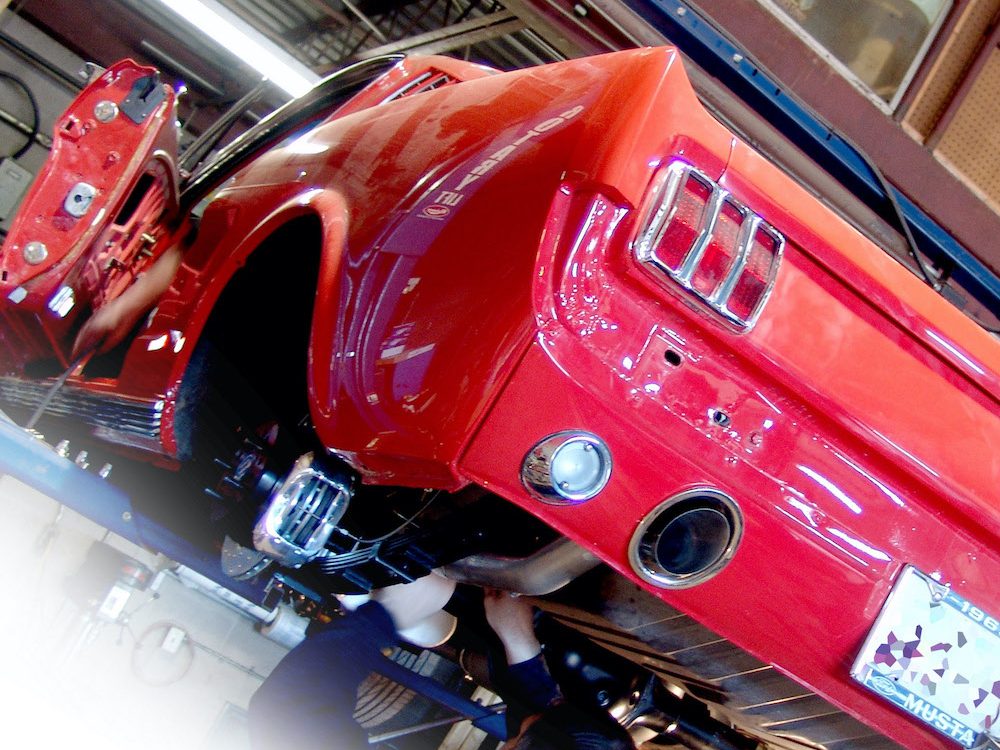 The front wheels fit perfectly, but the rears, although the right width, stuck out past the fender openings. The problem was that the offset was wrong. Offset is the relationship (distance) of the mounting flange to the centreline of the wheel.

Some people don’t mind wheels sticking out, but I wanted the car sitting low with the tires neatly tucked in where they belong. This required executing the next phase of the plan: Narrow the rear end.

Rear suspension: 1965 Mustang will be a one-of-a-kind car. That’s the plan anyway

You might think this is a bit extreme to get the right stance/ ride height, but stance is everything and it will pay off in the end with a one-of-a-kind car that looks just right.

The process involves removing the rear end, removing the axles and cutting the same amount of each end of the rear-end housing. Then we re-welded the axle flanges to the tubes (in a jig to make sure they were square to the housing). We ordered new high-strength axles that were also shorter to match the new width of the housing.

The plan — right from the time the wheels were picked — called for removing just one inch from each end of the axle housing, which effectively moves the rear wheels inboard by the same amount.

Any more and we would have to also relocate the leaf springs further inboard. That creates a domino effect of modifications such as narrowing the gas tank, redoing the exhaust system and messing around with the shock-absorber mounting points and their respective angles.

Thankfully, one inch on each side was all that was needed, so narrowing the rear end by itself was enough, although no small feat. 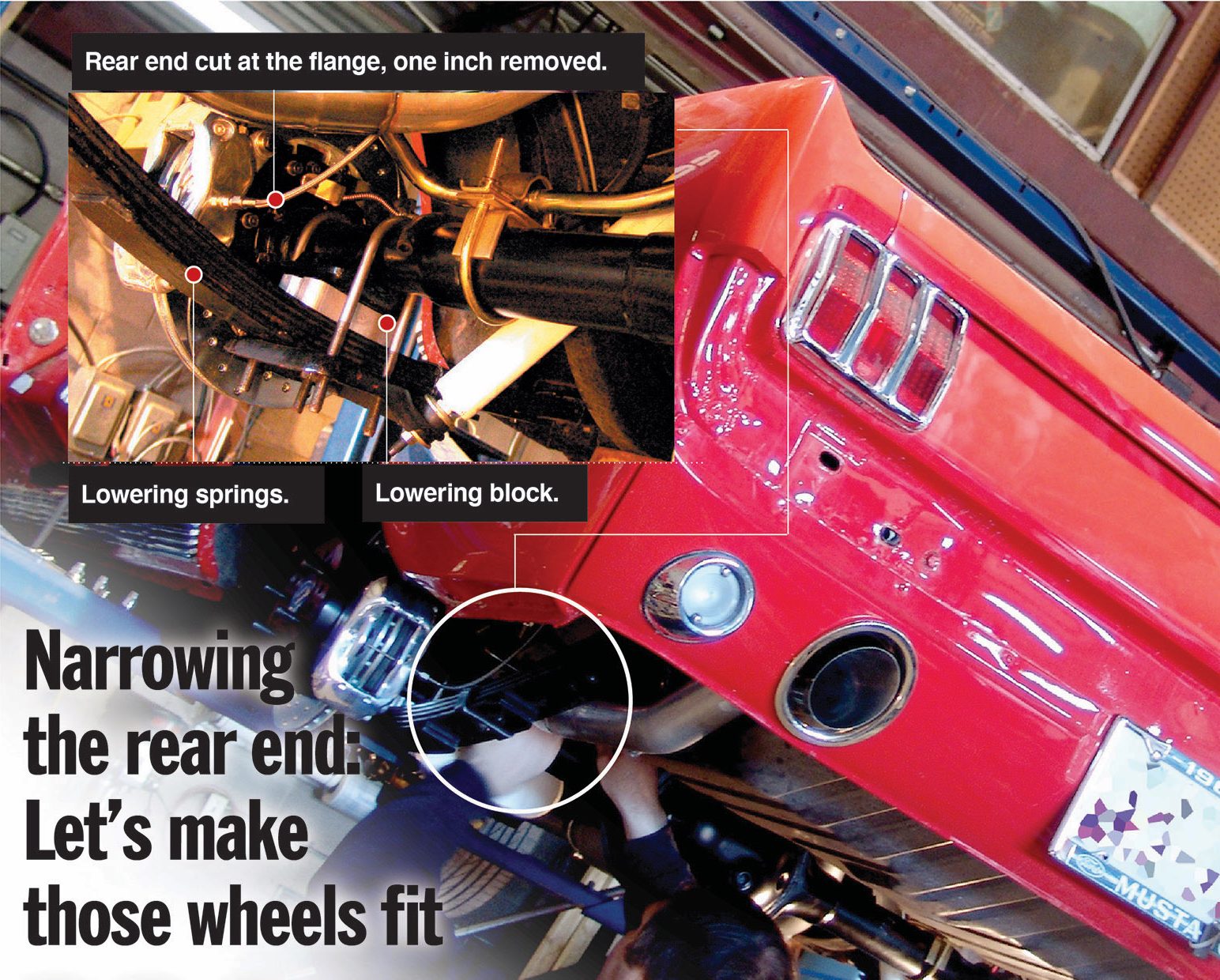 Still, that one-inch measurement carried some risk. There was no way to know for certain about the clearance inside the fenders until the operation was completed, the wheels bolted on and the car sitting on the ground at the desired ride height.

But to get the right ride height with leaf springs — about three inches lower — isn’t easy because leaf springs aren’t adjustable. At all.

So, the next part of the plan was to install a set of “reverse-eye” leaf springs that flips the front “eye” mount to the bottom side of the spring instead of the top. That’s the reverse part. This effectively drops the body down by the difference between the two locations.

But I also didn’t know if the arc or arch of the new springs was any different. We put the car back together to get a look. Still too high, so a set of two-inch lowering blocks between the axle and the springs. 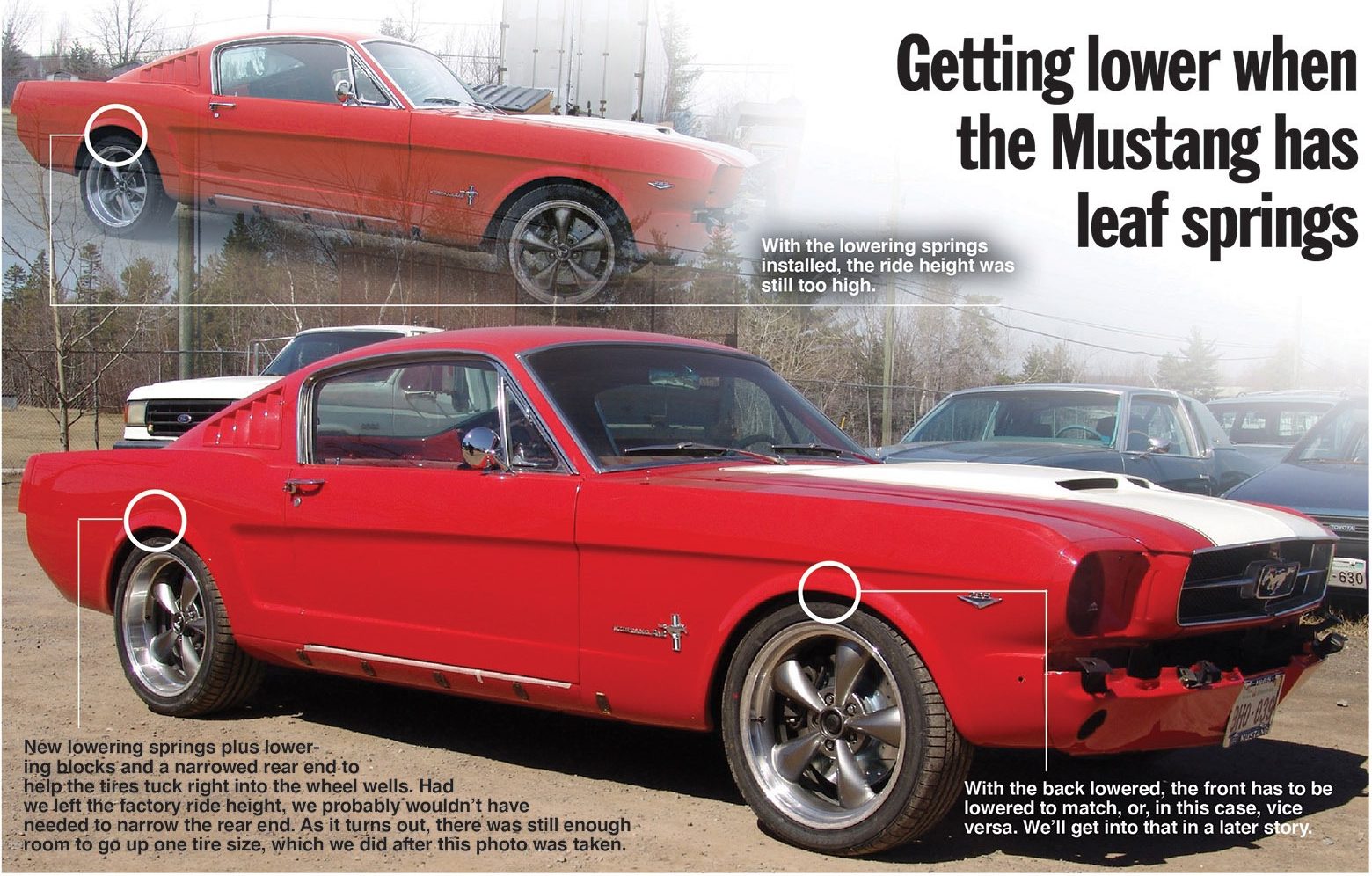 Jackpot. The perfect ride height. But there was actually a small problem that turned into a major fix. The more I drove, the more the axle housing shifted (settled) to the driver’s side of the car, taking both tires with it. One began rubbing on the outside of the wheel well, the other tire started rubbing the inside.

This points out one thing: That if you’re going to run tight tire/wheel clearances with leaf springs, it’s a gamble.

So, we did what any self-respecting hot-rodders would do: Took out the rear axle and rear suspension — leaf springs and all — and started from scratch. That wasn’t part of any plan.

We’ll redo the entire back half of the car next time around.