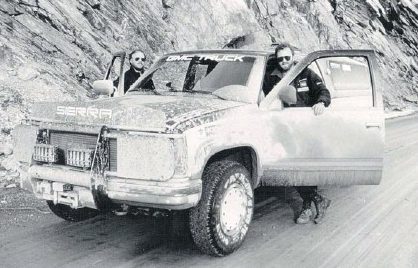 Testers Abroad: Something to crow about on the Pan-American Highway

I’d been harbouring a nasty fear since committing to take on the challenge to halve the existing 56-day driving record between the bottom and top of the Americas.

It was something I kept to myself so my partner on that motoring marathon, American adventure journalist Tim Cahill, was unaware. I wasn’t proud of the lingering fear that seemed impossible to shake.

There really was plenty to worry about that fall of 1987 as we pounded my then-new 1988 GMC Sierra 3500 diesel pickup truck north from Ushuaia, Argentina through the jungles and deserts of the South American continent.

A date with a container ship to ferry the Sierra and us around the Darien Gap from Cartagena, Colombia to Panama City had no flexibility, so timing was everything.

Aside from the drive itself, the possibility of a kidnap-ransom scenario had to be considered. The Shining Path, a Maoist guerrilla insurgent organization in Peru, was into such activities. Then there were those narrow winding mountain roads through Colombia where we were stopped at gunpoint 17 times in three days.

These were some of the issues we were dealing with, but a secret nasty fear still haunted me.

The source of the unshakable anxiety was rooted in Central America at the frontier between Costa Rica and Nicaragua. Nine years earlier, in 1978, I had hitchhiked from Panama to Montreal and was turned away at the Nicaraguan frontier by a drunk and obnoxious post commander.

Captain Head Honcho had played with my head and nerves by dropping his watch into my shirt pocket while his men trained weapons on me, clicking the safety mechanisms of their rifles off and on. A mind game, of course, but the incident played on me from the time I committed to the Pan-American motoring challenge.

After four days in the Captain’s suite of the container ship, Tim and I felt refreshed and optimistic pulling out of Panama City.

With only Panama, Costa Rica, Nicaragua, Honduras, Guatemala and Mexico to deal with before we reached the United States, we were upbeat.

The drive through Panama was in the daylight and we made good time to the Costa Rican line. We cleared into Costa Rica a half-hour before the border closed for the night and continued north into the night. We would take it slow and safe and hit the Nicaraguan frontier by daybreak.

The night was wracked with obstacles though.

On the winding drive over Costa Rica’s Cerro de la Muerte, the Mountain of Death, pea-soup fog kept the pace at a crawl. At one point, a Toyota pick-up truck ripped past us. A few kilometres later, we saw skid marks and a break through the roadside vegetation. People staring down into the abyss told us a white Toyota pick-up had just missed the turn.

Fifty kilometres from the border, a landslide had closed the road but, in the darkness, we found a narrow track that might get us around the problem. Our detour went through what looked like a slaughterhouse and we had to drive over slick rotting animal parts.

We made it through the sickening detour then to the Costa Rica / Nicaragua frontier ten minutes after it opened for the day.

Of course there was no drunken Captain Head Honcho to greet us and the Nicaraguan border was a snap, one of the easiest we had encountered. Heading north toward Managua and Honduras, I confessed to Tim the nasty fear that had turned out to be unfounded.

We agreed there is always a degree of nasty fear when testing your limits. Once one gets sorted out, another usually surfaces.

The Sierra was running just fine and we made good time through Nicaragua.

Tim was on a roll dictating hours of notes for the book he would write about our adventure. Like the Energizer Bunny, the two gringos in their big American pick-up truck seemed unstoppable.

Once we cleared into Honduras, it was only two hours to a planned stop in Tegucigalpa, the capital. With the Nicaraguan adrenalin rush gone and 30 hours of driving under my belt, I asked Tim if he would to drive.

Tim had not hit fourth gear before I drifted into a deep sleep in the passenger seat. The windows were down. Evening costal breezes had cooled and the fresh air was a pleasant change.

BANG! The noise woke me with a start. I felt warmth then pressure on my stomach. Not good, I’d been shot!

As I struggled to wake up, guttural moans from Tim filled the cab. The truck was in rapid deceleration, confirming my belief we were being ambushed. I could feel my guts spilling onto my lap.

My groggy eyes focused on a badass crow lying on my lap. The big bird had hit the side mirror, flipped into the window and landed in my lap. Like me, it was coming to, and scared. Surely, the crow was about to rip off my genitals with its deadly talons or pierce my larynx with its dagger of a beak.

So soon, another nasty fear!

Between maniacal screams and hysterical laughter, Tim managed to get the truck safely stopped on the side of the road to Tegucigalpa.

The big time adventurers and the Honduran crow wasted no time exiting the cab.

“This trip certainly is something to crow about,” Tim Cahill laughed.

Read another tale from the Pan-American Adventure here.