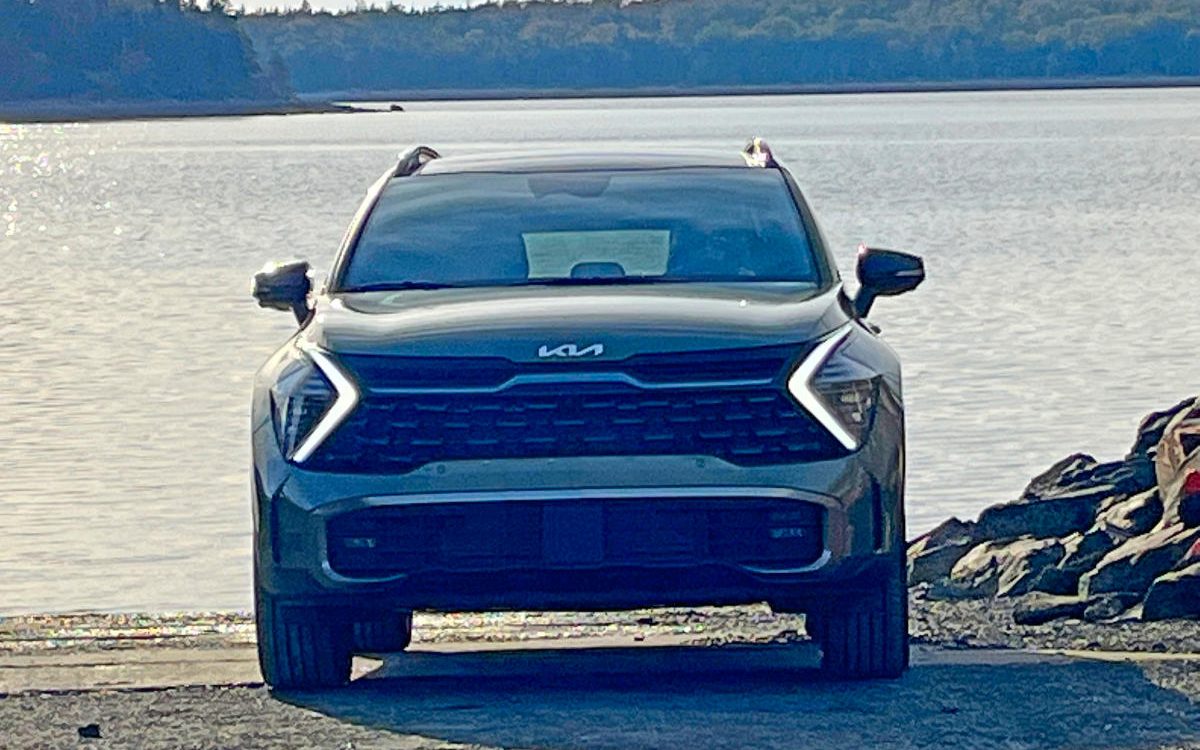 From road to roof, from the ‘Tiger Nose’ grill to the black skid plate moldings on the rear bumper, the 2023 Kia Sportage has been completely revamped.

In addition to a new platform, engine, transmission and dramatic new look, it offers a much larger interior than the outgoing version. The Sportage has gone from having one of the smaller interiors in the class to being the most spacious.

The 2023 Sportage is 18 centimetres longer, 5.3 cm taller and 1 cm wider than the 2022 model. The wheelbase is a full 8.5 cm longer and that extra space between the front and rear wheels will be appreciated by second row occupants and when using the cargo area.

Folks in the second row have an amazing (for this size vehicle) 41 centimetres of legroom, only two less than those in front.

Cargo space has also benefitted from the longer wheelbase – 30% more behind the second row. With the two-level cargo floor in the lower position, there is a generous 1,121 litres of space. Drop the second-row seats and that expands to a class-leading 2,098 litres.

The fifth generation Sportage slots in the Kia crossover lineup between the compact Seltos and the seven-seat Sorento, with which it now shares a new platform known internally as N93.

The design of the 2023 Kia Sportage is new, fresh and distinctly Kia.

As it neared the end of the West Point, Georgia assembly line, a striking coat of ‘Jungle Green’ paint was applied to the test vehicle. This was sort of gilding the lily since the new Sportage is a looker regardless of colour.

That gorgeousness continues inside.

On upper trim levels, the driver and front seat passenger face a panoramic display stretching 62 cm from one end to the other. Until now, this obviously-premium feature has been confined to very expensive vehicles wearing luxury nameplates.

Trust Kia to bring it down to the mainstream, more affordable segment!

The vast curved surface incorporates a pair of 31-cm wide screens – a digital instrument cluster for the driver and an infotainment display. The graphics are sharp, and controls intuitive. On some trim levels they can be customized for personal profiles.

The tester was the X-Line Limited model with wood-look trim and leatherette seats. Materials offer a quality feel and with the exception of some hard plastic on lower surfaces, soft touch is the name of the game. The wide and tall centre console houses controls for the AWD drive mode selection system, 360-degree, three-dimensional bird’s-eye-view monitor, heated and cooled seats, hill descent control and other features.

The interior is exceptionally well done in terms of fit/finish, design and materials – suitable for a much more expensive vehicle.

It is dark but that is offset by a panoramic sunroof with a power sunshade or the optional two-tone colour-scheme. There are a number of clever storage touches including collapsible cup holders, hooks for bags on the back of the front seats, and slots on the back of the head restraints for tablets or game devices. They can be charged via USB C outlets on the side of the front seats.

The new Sportage is available with gas, or hybrid powertrains. A plug-in hybrid will follow this fall.

To be frank, it could use more power to compete with some others in the class. Acceleration from rest to 100 km/hr takes more than nine seconds. That shortcoming is easily solved by opting for the hybrid which is available in other trim levels. It uses a turbocharged 1.6-litre engine, a 44 kW electric motor and a six-speed automatic.

Horsepower jumps from 187 with the gasoline-only engine to 227. More importantly torque goes from 178 lb. ft. to 258, available from only 1,500 rpm – maximum power right down where you use it. Properly equipped the new Sportage can tow up to 2,500 lbs.

The development team arrived at a reasonable compromise between ride and handling. The longer wheelbase provided by the new platform has allowed improved ride comfort. It is not a sports car but can handle the curves with ease until pushed too hard when understeer and body role come into play.

The X-line version is capable of light off-road travel with sufficient clearance, good approach and departure angles, and a terrain management system. Perhaps of more importance to most buyers will be the resulting excellence in slippery winter conditions.

The fifth generation Kia Sportage has grown up.

The complete makeover takes it from being one of the smallest vehicles in the biggest and toughest segment of the market to one of the largest. In typical Kia fashion, it offers more than expected when compared to others in the class. From design and efficiency to technology and a family-friendly interior, this update is significant.