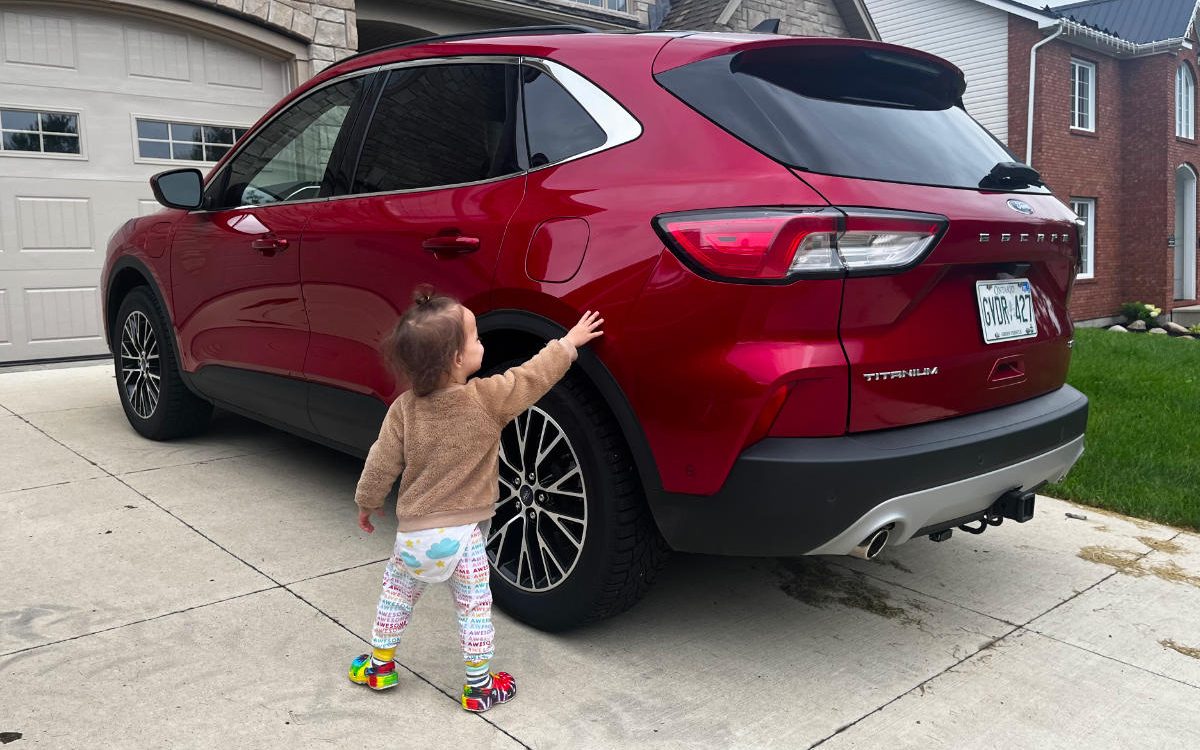 Wheel Woman: Escape from the Ordinary

Many of the definitions for the word ‘escape’ describe eluding a dangerous or uncomfortable situation or breaking free from confinement. I prefer the definition that applied to my weekend in the 2022 Ford Escape PHEV – ‘a form of temporary distraction from reality or routine’.

The weekend began with a four-hour road trip from Halifax to Fredericton to spend time with some very sweet humans.

Grandkids. Everyone knows spending time with them is a pure, unadulterated E S C A P E.

If I want to hunker down on the carpet and crash toy cars together with two-year-old Vale, I can. If I choose to spend a couple of hours trying to escape flying fireballs on a vintage board game with big brother, Dory, who turns six very soon, I can. If Vale wants me to blow bubbles outside for a half hour in the rain, I will.

And the hits just kept coming!

Dory, and mom, Lucy, were waiting outside when I pulled up in my tester for the week, a red Ford Escape.

Dory astutely observed: “We never know what you and Grampy will be driving when you come.”

On this trip, I was solo. No Grampy (Garry). Just me, Nonna.

I had some serious entertaining to do. Luckily part of the plan was a road trip to Codys, New Brunswick about an hour away from Fredericton.

We took the two car seats from the back of Lucy’s Subaru Ascent and deftly installed them into the Escape. Actually, Lucy deftly installed them while I chased Vale as he zigzaged across the lawn (several times). Dory and I discussed the benefits of plugging in and charging the battery of the Escape, letting the vehicle run on electricity for a while, reducing the amount of fuel used as well as cutting emissions.

Not only does the Escape get you out of town and provide a distraction from your routine, but the word also plays into our eventual escape from fossil fuel dependence.

The Ford plug-in hybrid escapes the confines of the internal combustion engine, offering some zero-emissions driving plus the flexibility of a long road trip if you don’t have a chance to plug in.

Because when kids are strapped in their car seats, there’s not much time before they ‘blow’.

Vale and Dory were excited about our destination, an open house at Lily’s Place Animal Sanctuary, a registered not-for-profit vegan farm sanctuary on a former golf course. The hour-long drive was the perfect escape out of the city.

For families that don’t go to zoos, a farm sanctuary offers an opportunity for children to see live animals up close while learning about the important mission of places like Lily’s Place.

The grand finale of the non-stop weekend escapade was a road-rippin’ adventure (as Dory called it) from Fredericton to Halifax. I would take Dory to stay with his cousins in Dartmouth. Just Nonna and Dory out there on the open road. We would stop for ‘bio’ breaks on the side of the road like true road warriors.

A road-rippin’ adventure in the 2022 Ford Escape PHEV

The four hours flew by (for me, anyway). We talked about my childhood road trips with my sister, singing and playing road games, our only options to while away the hours. Dory and I discussed smog, global warming, giant blueberries, dinosaur fossils in the cliffs of Joggins, porta-potties, the mining town of Springhill and what it’s like to pat a turkey.

We tried to learn the lyrics of a song called “I pooped my pants (in a bowling alley)” – Sorry, Lucy. We listened to podcasts about Greek myths and wars and then we spun some solid Disney tunes to keep us rolling down the highway.

Back in the driveway at home, I cleaned out the Escape and plugged it in. I was sad the road-rippin’ adventure was over. There’s nothing like grandkids and road trips for a true escape from the routine.