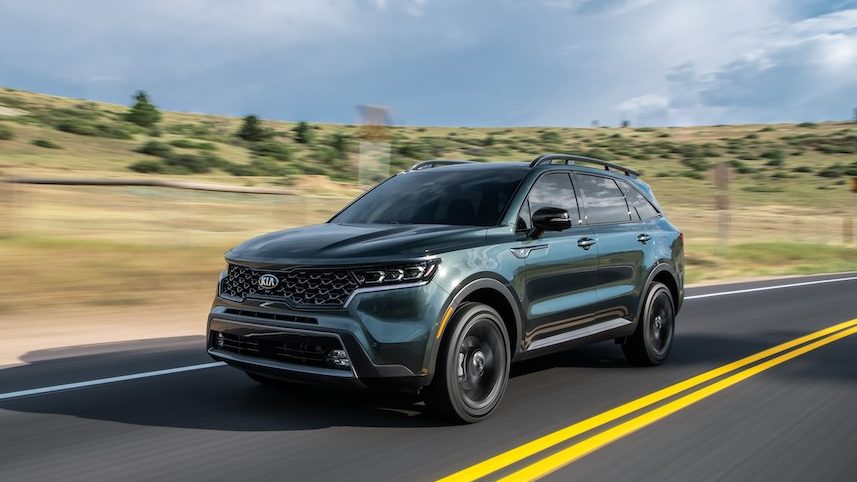 Hard on the heels of the Telluride, which has won just about every award possible on both sides of the 49th parallel, Kia brings out a redesigned Sorento.

The 2021 Sorento will arrive in the fourth quarter in six trim levels. There will be a jacked-up version with lots of black trim and some off-road cred. Turbocharged hybrid and plug-in hybrids will follow next year.

The first Sorento came to these shores in 2003. The fourth generation will roll off the Georgia assembly line and into Canadian Kia stores in November.

Kia Canada has exerted some influence with the mother ship, allowing it to spec the 2021 Sorento differently for our market.

The main differences are that all Sorento vehicles sold in Canada will boast all-wheel-drive and have three rows of seats. On the plus side, we will get more trim levels than our neighbours to the south.

Kia must develop the hybrid/AWD pairing, however, to make AWD standard across the board for Canadians. This means a delay for the hybrid version. Americans will get a front-drive hybrid initially.

Bearing a distinctive resemblance to the Telluride, the 2021 Kia Sorento is built on a new platform.

It is slightly taller and wider than the outgoing model but almost exactly the same length. The wheelbase is 35 millimetres longer and this extra room between the front and rear wheels has been used to enhance second row legroom and access to the third row. Second row Captain’s chairs will be available on higher trim levels.

As we have come to expect from Kia, technology plays a key role in giving it a leg up on the competition. The fourth generation Sorento features some pretty innovative touches. A walking guide shows how to get to your final destination if you have parked within two kilometres, after you have parked.

The surround view camera helps owners locate their Sorento in a crowded parking lot. It will send images of the area around the Sorento and transmit it to your smart phone through the UVO app.

The centre infotainment screen ranges in size from 20 centimetres to 26 centimetres. Available is a 31-cm digital instrument cluster, the largest in the segment. When equipped with the latter, a view of the adjacent lane replaces the tach or speedometer depending on which turn signal is activated.

Standard safety features include forward collision warning and avoidance, warning of pedestrians, bicycles, vehicle and other objects in front and lane keep assist. There’s even a warning when the vehicle in front begins to move from a standing position.

Power will come from a pair of 2.5-litre four-cylinder engines, initially.

A normally aspirated unit, producing 191 horsepower and 182 lb.ft. of torque will serve in the base models.

A turbocharged version with 281 horses in the corral and 311 lb.ft. of twist will come in at the X-Line trim level. This engine replaces the V6 offered previously. It provides 22% more torque than the six and addresses that engine’s mediocre fuel efficiency.

Despite the additional power, the tow rating has dropped from 5,000 pounds to 3,500. Both engines will be mated to an eight-speed dual clutch automatic transmission.

Hybrid and plug-in hybrid models will be available at some point in 2021. Both will utilize a turbocharged internal combustion engine, a first for the segment.