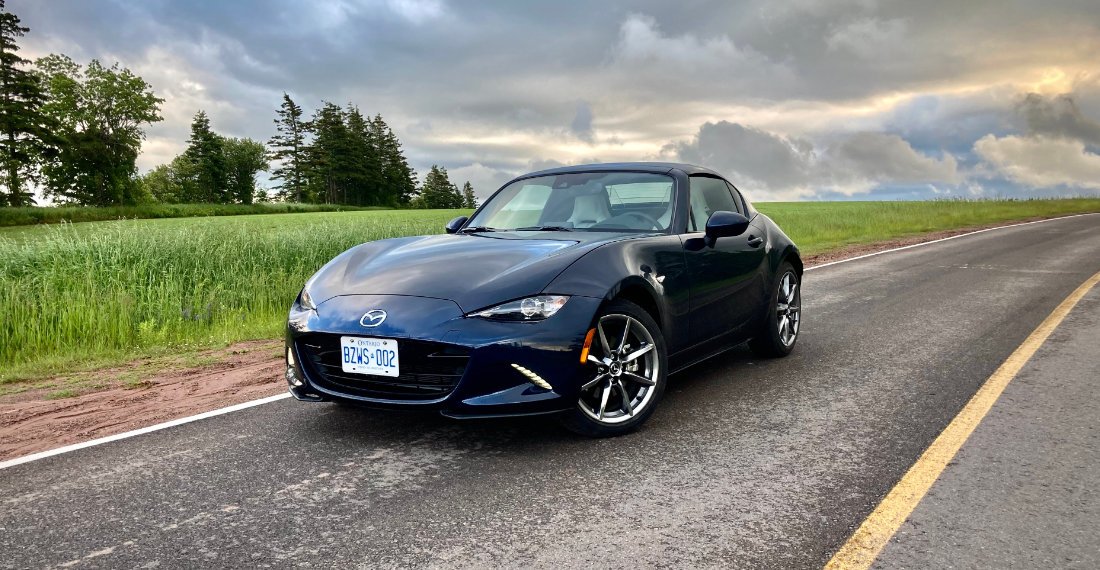 Prince Edward Island, like many parts of the east coast, has become a beacon of hope for those who’ve faced more than their fair share of COVID and its associated life disruptions.

You know how the story goes: the house across the road from our homestead was purchased last fall, sight-unseen, by an individual from, you guessed it, away.

In fact, the house three doors up was also acquired by an Ontario family.

Last week at the Access PEI wickets on either side of my father-in-law were people from outside Atlantic Canada. Smack in the heart of Summerside, my co-worker’s three newest neighbours are, respectively, from the UK, British Columbia and Ontario.

Small but mighty, PEI is Canada’s fastest-growing province. Why wouldn’t you want to be here?

In PEI, our kids went to school all year long. Through the pandemic, we kept going to church, we had dinner with friends, we got our hair cut and we watched musicians perform.

COVID-19’s minimal impact in PEI – around 200 cases all-time, fewer than 130 cases per 100,000 people, zero deaths – may have created a sense of urgency for mainlanders to take the plunge and purchase property.

In the long-term, however, PEI isn’t appealing merely because COVID-19 didn’t infiltrate.

Last week marked four years since we left Halifax for rural PEI. Obviously we didn’t land here for reasons related to a then-unknown pandemic. PEI is home to our roots, it’s the place we wanted to raise children, and it’s where homes are (were?) affordable. 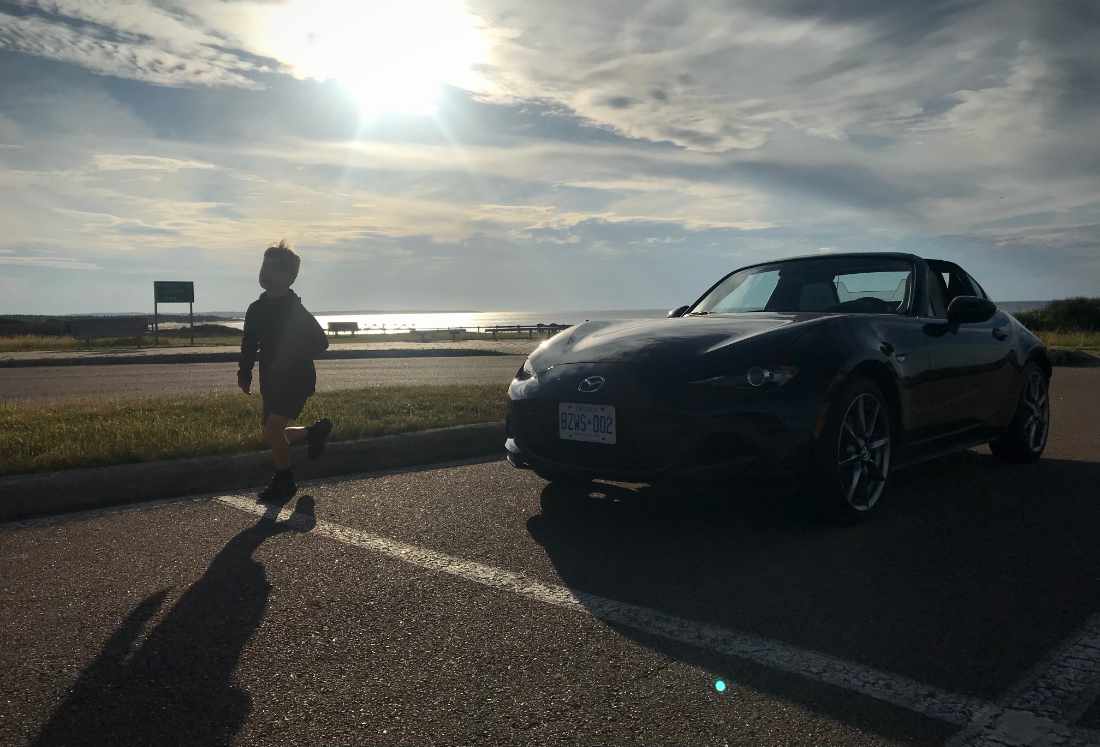 We love the true four-season lifestyle PEI offers, the absence of traffic, and the degree to which everyone lends a hand to anyone.

Four years ago last week, I plunked a three-year-old into the passenger seat of a Soul Red 2017 Mazda MX-5 RF GT in Eastern Passage and we made our way to PEI on a summer’s evening, following our Honda Odyssey. Our own 2004 Miata, sadly since sold, was already waiting for us on The Island.

Now seven, our oldest could plunk himself into this Mazda. We celebrated four years in PEI by driving our favourite car to, well, nowhere in particular. 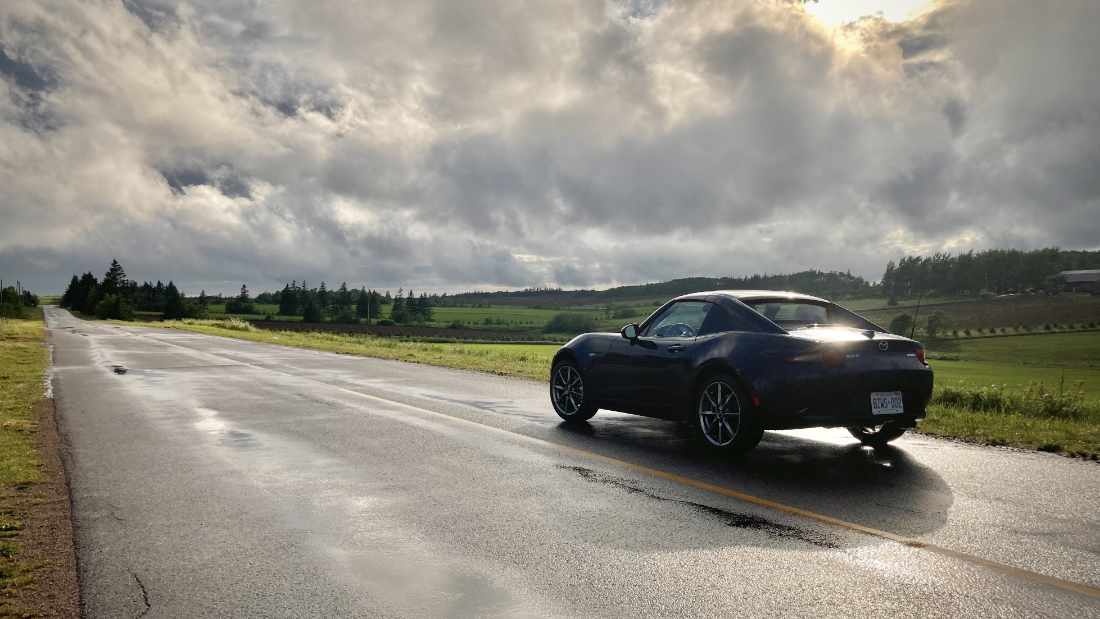 We drove through a quiet Cavendish, three years after 25,000 people stood in the rain as they waited for Carrie Underwood at the Cavendish Beach Music Festival. We drove past the Malpeque Community Centre, which typically bursts at the seams for the early summer Festival of Small Halls as Islanders and tourists listen to folk music evening after evening.

We drove to the high points of Clinton where we surveyed the scarcely believable development of Long River, Burlington, and the shores of the Southwest River.

Yet in spite of a population that’s grown 14 percent over the last decade, PEI isn’t changing. And in spite of three decades and four generations under its belt, the Mazda MX-5 isn’t either.

It’s still a featherweight. It still drives as though it’s even lighter than its sub-2,500-pound curb weight. It’s still full of feel and eager to communicate; just as likely to share its impressions of the road through the seat of your pants as through the wheel.

With any one of my three boys in the passenger seat, space was sufficient. With my crossfitting friend, Jeff, along for the ride, let’s just say social distancing could not be practiced in accordance with public health protocol.

Inadequate elements are rendered irrelevant. Miata demerits are destined for the dustbin, never to be heard from again. In line with other icons such as the Jeep Wrangler, there are far too many components transforming this retractable hardtop MX-5 into more than the sum of its parts for any driver to consider criticism.

See, the 2021 Mazda MX-5 RF GT doesn’t perform like a modern sports car, not only because this fastest-ever Miata fails to accelerate like a missile but also because it’s not spectacularly grippy. Meanwhile, there’s plenty of body roll, and it carries speed well only if you keep the 181-horsepower 2.0-litre on the boil.

But if the MX-5 was all grip, completely even-keeled, and easy to drive fast without trying, it wouldn’t be a Miata. It would be painfully normal and sadly uneventful.

Instead, the modern MX-5 is entirely loyal to Mazda’s original ethos.

Here’s hoping that in another four years, another Mazda roadster will land in my driveway to mark another summer. The boys and I will memorialize momentous Miata drives of the past. We’ll make more Miata memories. We’ll study just how much PEI has changed, and just how much it’s stayed true to itself.

Now excuse me: I have to go through my contacts and find the number for the couple to whom I sold my own Miata. In a hot sports car market, is there such a thing as discounts for past owners?