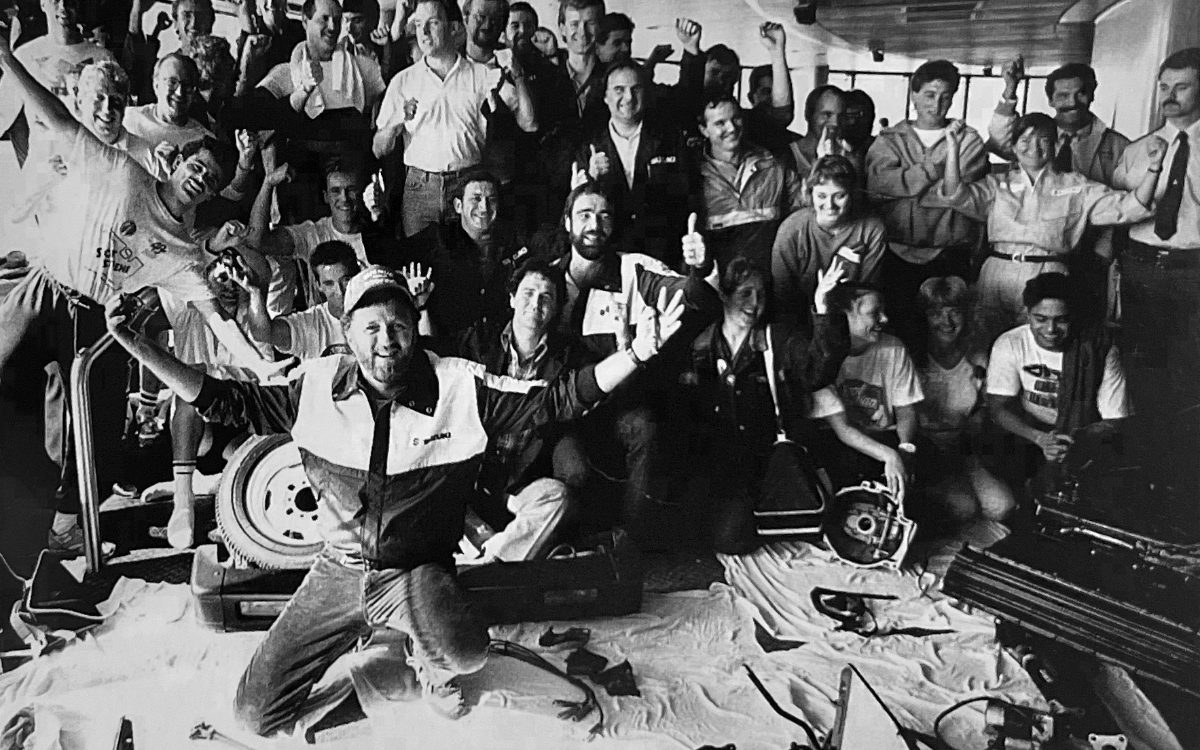 One piece at a time: Bottom to the top of Toronto – Part 2

With tools flying, technicians stripped down the Samurai, handing parts to the platoon of carriers who lugged them up the zigzagged stairway to the top of the world’s tallest free-standing structure.

I carried the steering wheel, a cellular telephone and a two-way radio through the traffic jam of people, car parts and sweat.

On the way, I was passed by the exhaust system, transmission and rear differential before running into gridlock about 200 stairs from the top, behind the hood and the bulky rear body sections.

The tire and wheel assembly got to the top first. It took 20 minutes, a rate of 1.47 stairs per second.

The engine was another story. Eight people struggled with it for an hour and thirty-two minutes while a stockpile of parts grew on the observation deck. Since the first parts disassembled were generally the last parts to be assembled, not much could be done until the frame, which was near the end of the line, arrived.

When everything was at the top, technicians put the Samurai back together in just 59 minutes.

I slipped behind the wheel, started the engine and drove a couple of metres across the finish line, just outside Sparkles Disco.

We had done it!

From the bottom to the top of Toronto in five hours and 38 minutes, at a blinding speed of .004367051 kilometres per hour.

Technicians, sponsors and carriers cheered while astonished tourists looked on in disbelief. The navigator and I proudly presented the $6,000 to officials from the United Way.

That night, CTV National News wrapped up the newscast with a time-lapse video of The Great Ascent in which the disassembly, ascent and assembly were played at high speed with Rimsky–Korsakov’s Flight of the Bumblebee playing in the background. News anchors giggled about it during the sign-off.

A lot had gone on in the three weeks since I met with Rob Hutchison. All those people. The parts. The stairs. Then, a public stair climb a week later raised another $60,000 for the United Way in Toronto.

The Great Ascent seemed to be a success for everyone involved.

At a wrap-up meeting, I presented Suzuki Canada with an invoice for the $10,000 in expenses they had agreed to pay.

To my surprise, the president of Suzuki Canada, flanked by senior management, simply said. “We never agreed to anything like that, did we?” His management all nodded in agreement.

It was, and still is, the only time in 43 years of business that we ever got stung with an unpaid invoice. I took out a loan for the $10,000 and slowly paid it off over the next few years.