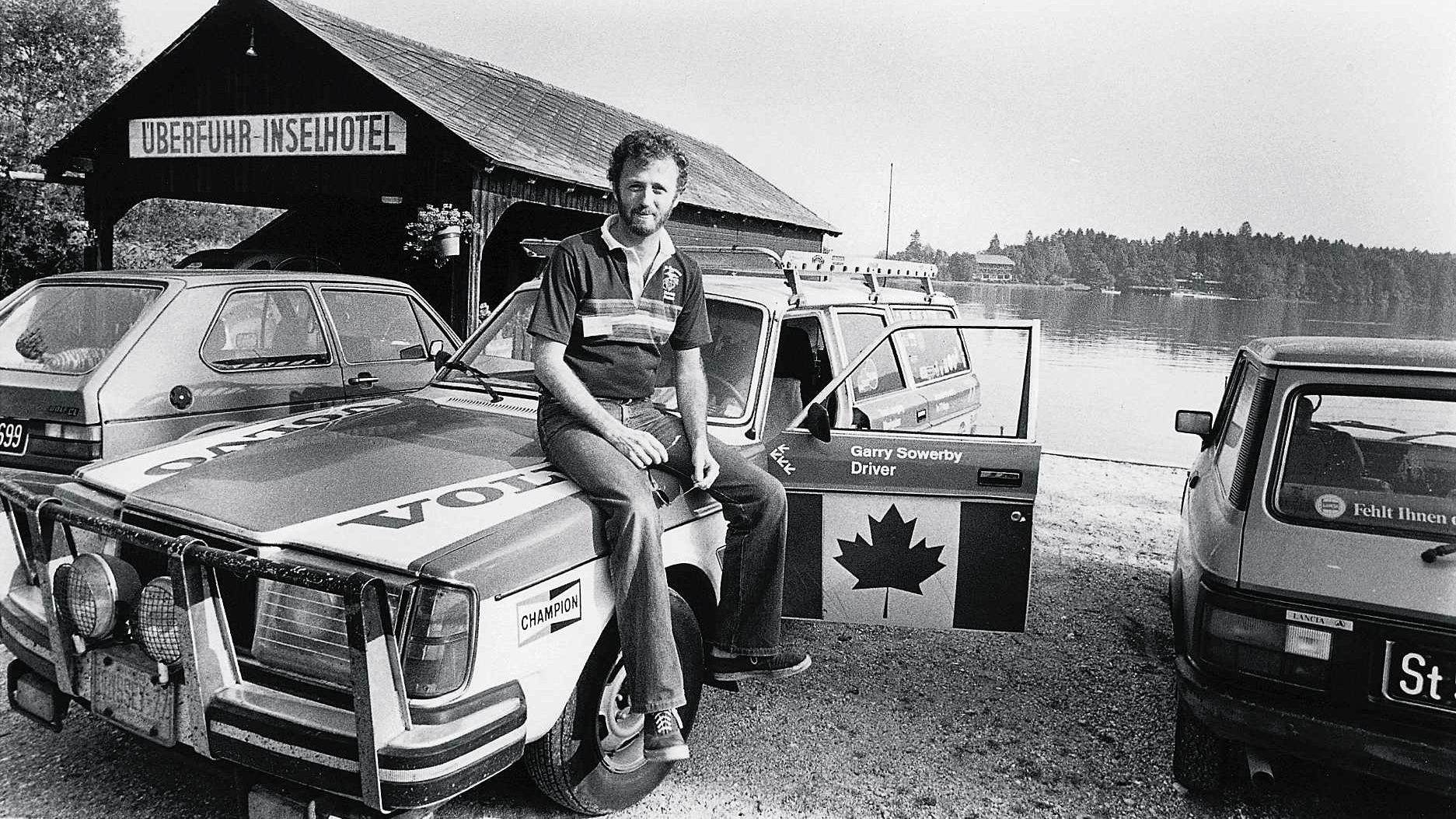 At a convention for Guinness World Record holders, Garry is propositioned (or so he thinks), meets a giant and breaks a finger. What happens at Faaker See, stays at Faaker See.

September 1982, Faaker See, Austria… I’d driven non-stop down the German Autobahns between the North Sea port of Hamburg and the Austrian border. It was a pristine September morning in 1982 and I was in need of a good sleep when I pulled up to the tourist information centre an hour south of Salzburg.

Nestled around a series of lakes at the base of the Austrian Alps, the stunningly beautiful area had nothing on Katrina, the slim, statuesque blond who greeted me. With a sexy, Spy Who Loved Me accent, she reviewed a registration package for the five-day convention I was about to attend.

Katrina told me I was one of 60 Guinness World Record holders registered, along with as many reporters from around the world. The Austrian Tourist Association would provide accommodations at resorts surrounding Faaker See, a crystal clear alpine lake a short drive away. Media events were scheduled throughout the convention where record holders could strut their stuff.

I was wondering how to demonstrate driving around the world at a press conference when Katrina folded up her notes and stood directly in front of me. She was gorgeous.

Her dreamy blue eyes seemed to detect my confusion. My knees buckled as I struggled to make sense of what she wanted.

“To Faak, so you can check into the hotel. It is a beautiful lake,”  she added, as I collected my composure.

The next morning, Norris McWhirter, who with twin, Ross, founded the Guinness Book of Records, welcomed the unlikely collection of humanity.

As he spoke I thumbed through Katrina’s documents trying to figure out who was who. Across the table Roger Bourbon, who ran marathons in a waiter’s uniform carrying bottled water on a serving tray, was chatting with Sabra Starr, a belly dancer who could gyrate for 100 hours non-stop.

Meanwhile Raino, a German, pulled a six-inch high bicycle out of his briefcase and started circling the room, as he would do all week whenever there was an audience.

Later, we stepped outside where Englishman John Moss clamped his teeth onto the end of tow-rope. The other end was tied to the back a snorting 490 cc Yamaha motorcycle. With John anchored to the front of a transport truck, the motorcycle hopelessly spun its rear wheel trying to escape the mighty molars of Mr. Moss. He told me his teeth once held down a helicopter.

Guinness World Record holders sure are a motley crew

Over the next few days I witnessed an unbalanced looking Englishman do 760 one-handed push-ups and met a flat-stomached chap who recorded 26,000 sit-ups. A gentleman known as the Flyer of Flemsbury made swan diving across four kitchen tables look like child’s play.

I hung out with the hungriest flame-eating lady who I suspected wore an asbestos wig. There was also the woman who could eat 100 metres of spaghetti in less than 30 seconds and lanky 7-1/2-foot tall giant, Chris Greener, the tallest man in the British Commonwealth.

The smartest man in the world was there and wanted to know if the Volvo we raced around the world had been ‘souped up’.

“Geeez, what was the worst part?”  I asked, trying to wrap my head around his obsession.

“Aaaahhh, the tires!” He went on to tell me about his plans to eat an Austin Mini. More tires!

On the last night of the conference,Lufthansa threw a big party.  Everyone feasted on old-world delights washed down with plenty of draft beer. There were lots of laughs.

During one of many washroom visits while chatting at the urinal with National Enquirer photographer, Jim Selby, giant Chris Greener came in. Jim slipped me one of those ‘Enquiring minds want to know’ looks as Chris approached the urinal beside us. To our dismay, instead of relieving himself, the giant broke wind, about-faced and stomped out.

The photographer seemed depressed. Quite a missed opportunity from his point of view I imagined.

“Don’t feel bad, Jim,” I offered, looking for a silver lining, “at least we heard a giant fart.”

About midnight we were taken back to our hotel. The manager invited me, the giant, the brain and Raino into the bar for a night cap. Raino pulled out his bike while I learned an important life lesson: don’t sit in an Austrian bar trying to out-drink a giant then go call your girlfriend in Toronto. And don’t fall asleep arguing with her about insignificant trivia with the phone line open.

Morning came quickly. I was dry with a pounding headache. There was a telephone bill for $375 USD under the door.

The shenanigans continued the following day

At breakfast, the Guinness folks explained their book was in itself a record for the largest-selling copyrighted book in the world. They pointed out the previous year’s sales were equivalent to 118 stacks of books, each as high as Mount Everest.

I scanned the room. In one corner, the fire-eating lady was trying to break her record of eating 6,670 flames in 2 hours. The smell of the torch was gross. In the other corner, Donna Maiello was trying to down 100 yards of spaghetti in under 30 seconds. Sauce flew everywhere.

Willem Klein, the human computer was sitting at my table. He could extract the 13th root from a 100-digit number in his head. I asked if he could translate my around-the-world record into minutes. He told me it was 107,011 and asked if I wanted to know the square root.

I escaped breakfast and headed to the summer toboggan run where teams were trying for the best time down the metal hill. They were all there – the belly dancer, Mr. Push-up and even Christian Patzig, the backward-sitting cyclist who peddled 113 kilometres using mirrors to steer while playing classical violin.

I was voted lead toboggan.

“Go faster!” They all coaxed.

I did, then managed to lose control and flip the toboggan half way down the slope. It knocked the wind out of me. My baby finger is still crooked from the incident.

I staggered to the bottom of the hill and asked Mr. Mangetout if he was giving the toboggan run a try. He declined, citing the havoc that would wreak on the 21 bullets he had for breakfast.

Back at the hotel I dutifully approached the front desk to pay for the blabbering, snoring telephone call. The manager, looking a little schnapps green himself, refused the money.

“It is on the house,” he offered. “If I had not passed out free schnapps, I’m sure the phone call would have been shorter”.

Out of the corner of my eye, I could see Raino opening his briefcase in front of a busload of Japanese tourists.