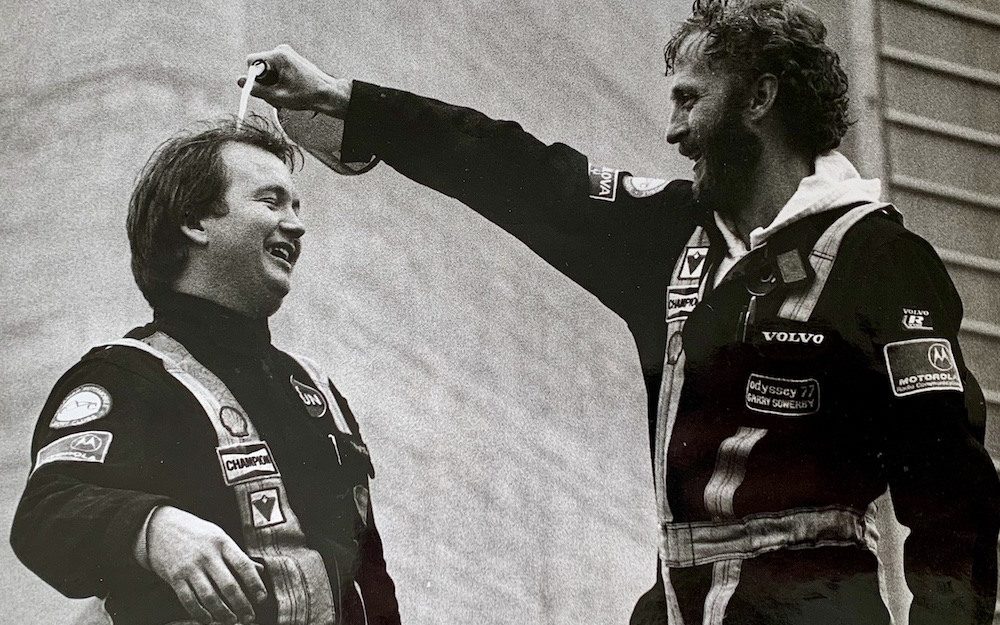 Driving Around the World: To the finish line and the world record

Forty years ago today, at 2:11 p.m. local Toronto time, Garry Sowerby and Ken Langley, two young Canadians from the Maritimes, crashed through a barrier at the CN Tower, completing an around-the-world drive and claiming a Guinness World Record. After three years of planning, fundraising and securing sponsorship, the pair drove 43,030 kilometres through 23 countries, across four continents, crossing the equator and the Arctic Circle.

What now? Back to reality.

The drive from Moncton, New Brunswick to Fredericton, north along the Saint John River into the province of Quebec then on to Montreal, Ottawa or Toronto was one I had done dozens of times.

The last days of driving around the world in record time were a bit of a victory lap for Ken Langley and me. With not much to worry about, the glow of success was so close and we were feeling proud of what our team had accomplished in just over 10 weeks.

With Al MacPhail handling logistics and PR out of our Toronto office and Sandy Huntley flying ahead as advance person, we had been a well-oiled machine. So many people had helped us in so many ways. We had been in a world of our own for two and a half months, out of communication for much of that time. 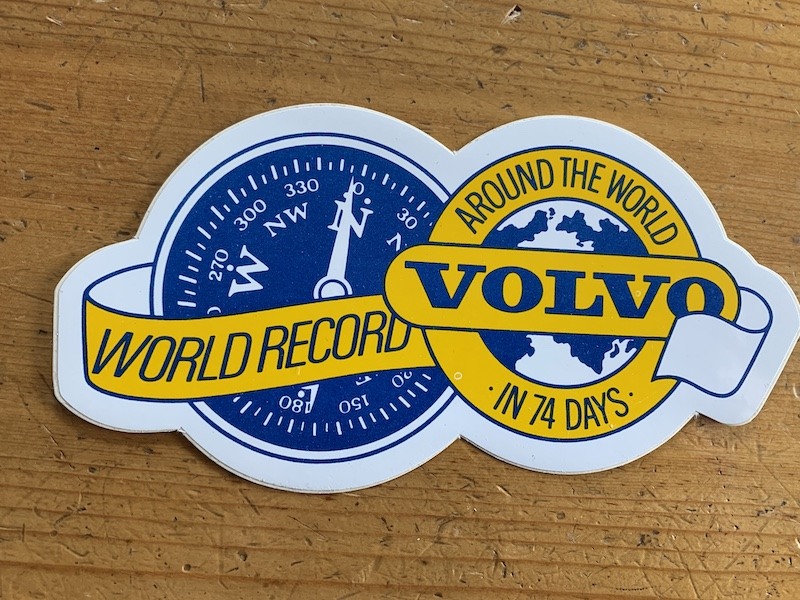 Assuming we would make Toronto and finish our self-imposed 74 days of road prison, what would life be like now?

There were quick stops for press conferences in Quebec City and Montreal. There was a rumour of a party brewing at our last overnight stop in Ottawa.

We figured they had to be two shiny new Volvo 242 GT vehicles that had just come to market. In my mind’s eye, they were identical, both black. 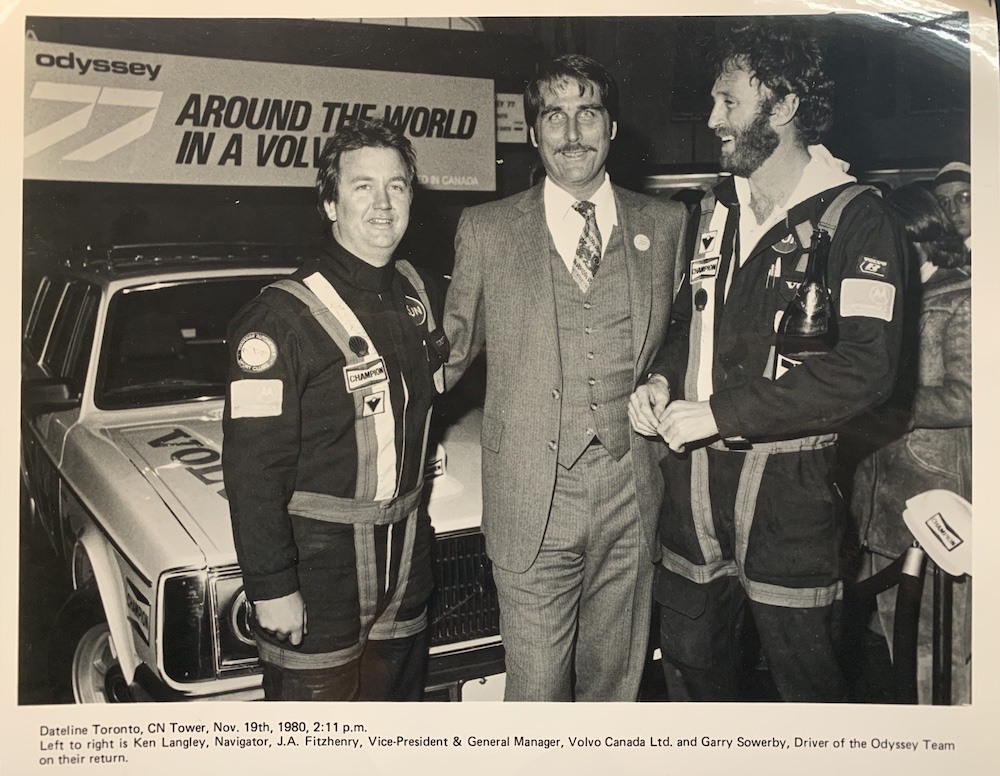 We had closed a lot of files in recent days. Tattered red folders for each of the 23 countries we had passed through were packed in one box. Green files on the hundreds of interviews we had done were in another.

A third box contained the blue logistical files related to driving an equator length, packing a car for four flights over oceans, skirting a war and dodging thousands of potholes and transport trucks as we wound our way around the planet.

Ottawa lived up to its expectation. The trip wasn’t quite over but we partied late at the Press Club with friends, journalists and anyone who wanted to join in.

We were a tad foggy-headed setting out from Ottawa for the 450-kilometre drive from Ottawa to Toronto’s CN Tower and the finish line.

In a way, I was sad to see the end so close.

The world in Red Cloud Ken and I had come to know so well was about to end. We would have to face a mountain of bills. With nowhere to live, it would be the sofas in our second floor walk-up office at Queen and Sherbourne for us.

We picked up a Toronto Sun reporter in Kingston then followed a police aircraft down the 401 bent on hitting the CN tower by 2:00, before the clock put us into Day 74. Media outlet cars started tagging along. We put the reporter in one as we entered Toronto, wanting to finish the trip with just the two of us and Red Cloud.

Traffic ground to a halt on the Don Valley Parkway, less than 10 kilometres from the finish line. A motorcycle policeman found us in the gridlock and, with siren blaring, the sea of cars parted as he led us to the waiting pack of people that had gathered at the CN Tower.

We had done what we said we would do, and even bettered the 77-day goal we had set, based on 7 times 11, two lucky numbers. We had lived up to our philosophy: do what you say you will do and nothing is free. And we had proved to ourselves that not much is easy.

As we turned into the CN Tower parking area, the police motorcycle peeled off. I fixated on the bright yellow Shell Helps barrier I had to drive through to stop the clock that had been ticking over our heads for 74 days. 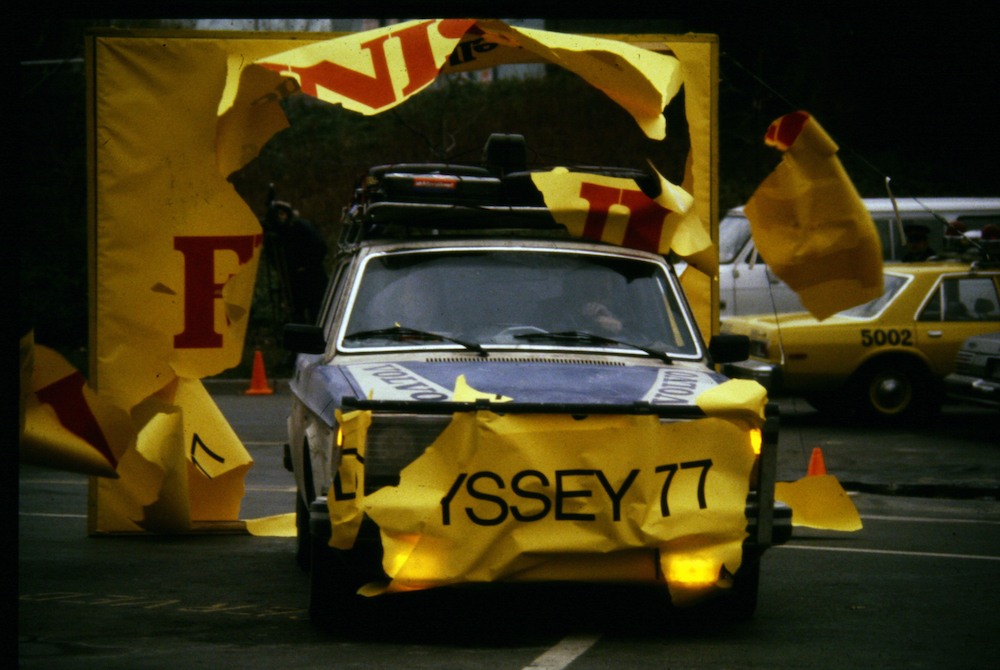 One of the happiest moments of my life

Out of the corner of my eye I saw them, two black Volvo GTs. As I slammed Red Cloud through the yellow paper wall, I yelled to Ken, “There they are!”

We were crushed by a horde of media, friends and well-wishers. The Boys from the Maritimes were back and everyone cheered and laughed. It was one of the happiest moments of my life.

At the press conference, we told stories and answered questions. One journalist asked if we made a lot of money and Ken turned out his empty pockets. Al McPhail whispered to me that our telephones would be cut off if we didn’t stop and visit ‘Ma Bell’ that afternoon. 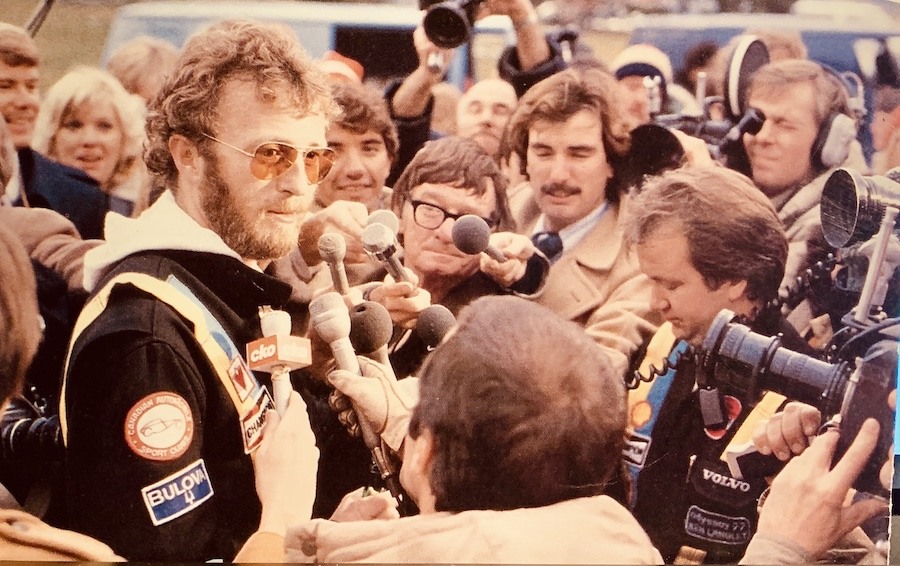 Jim Fitzhenry, Vice-President of Volvo Canada, presented us with two stunning sculptures of shiny Swedish crystal. A swimming polar bear was carved into the middle of each one. Forty years later, mine proudly sits on our mantle above the fireplace. 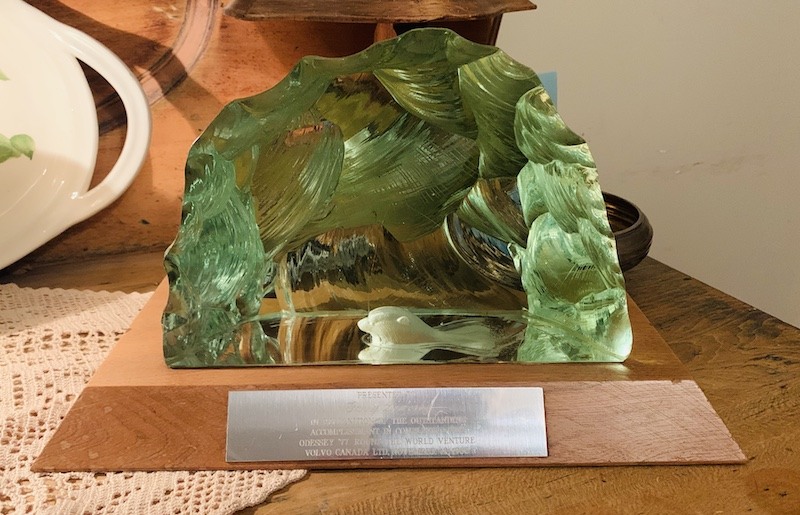 After the press conference ended and the crowd disappeared, Fitzhenry and his PR man drove off in the black GTs.

We carefully packed our crystal trophies into Red Cloud, then Ken drove to the Royal York Hotel and we checked in, courtesy of one of our sponsors.

It was the first time Ken had driven in 74 days, 1 hour and 11 minutes. Needless to say, it felt weird to be in a car without a steering wheel in front of me.

After a week in Toronto’s Royal York Hotel, the media interviews were over and the nightly parties had died down. We moved into our two-room office at Queen and Sherbourne. Red Cloud lived out front at a parking meter. Ken and I drove the odd 12-hour cab shift to put some cash in our pockets.

But things were looking good.

We drove Red Cloud in the Grey Cup Parade to overwhelming cheers. Then we appeared on CBC’s Front Page Challenge and had to confess to Canada that, yes, we drove nude in the Australian Outback for a few hours. Of course, we hadn’t looked at each other.

We went to New York and appeared on Good Morning America. I made an appearance on the panel/quiz show To Tell The Truth, but didn’t win a dime.

Our friends chipped in and bought us solid gold toothpicks, something to fiddle with as we plotted our course of survival for the months ahead.

Red Cloud, Ken and I were booked as features at the major car shows across Canada that winter. Volvo produced global advertisements based on our trip. 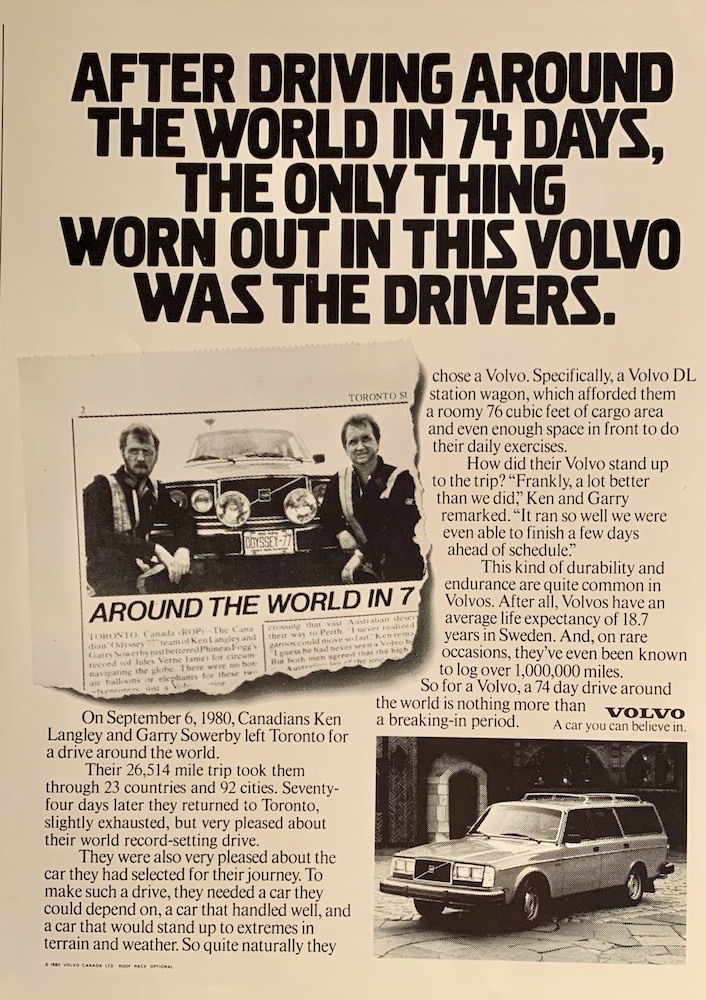 Volvo UK printed 500,000 kids colouring books featuring us and Red Cloud for daycares and special events. I’ve often wondered how many kids coloured the car red instead of blue and white. 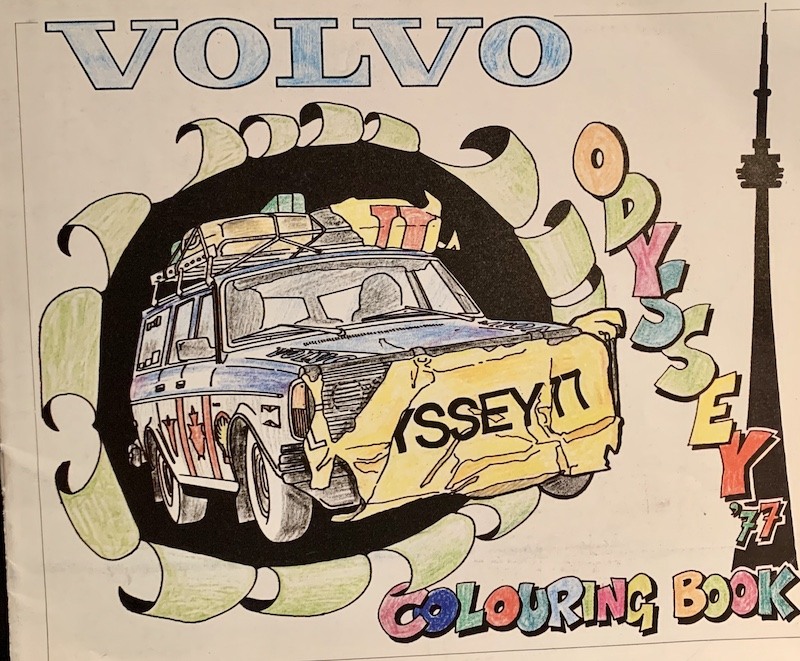 Shell Canada distributed a ‘Shell Helps’ brochure across the country. Canadian Tire had a page in their catalogue on our adventure.

By March 1981, things were looking good, despite a suffocating $120,000 debt with interest rates at about two per cent a month.

Motorola asked us to take the car to Scandinavia to help launch the world’s first cellular phone service. Guinness was going to feature Red Cloud on the cover of The Guinness Book of Records. 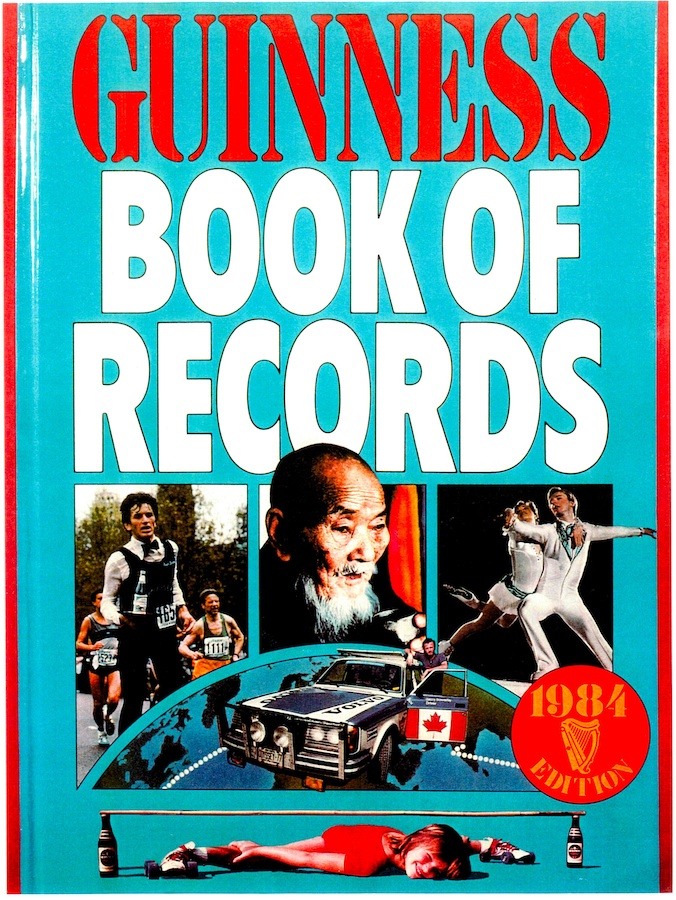 The cab shifts kept coming. And so would luck, we hoped.

Then, on a cold afternoon, as we met with our lawyers, film advisors and accountant to find a way forward, I was toying with numbers. Looking for a little luck, I thought I’d calculate how many hours and minutes our record of 74 days, one hour and 11 minutes were.

Ken was called out of the meeting to take a call from London, England.

“Someone is organizing a race from Peking to Paris next year to celebrate the 75th anniversary of the 1907 Peking-Paris Motoring Challenge.” He could hardly contain himself.

*Drive around the world with Garry, Ken and Red Cloud, the 1980 Volvo: 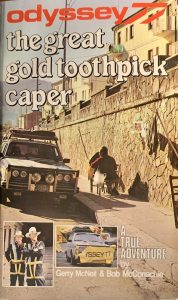