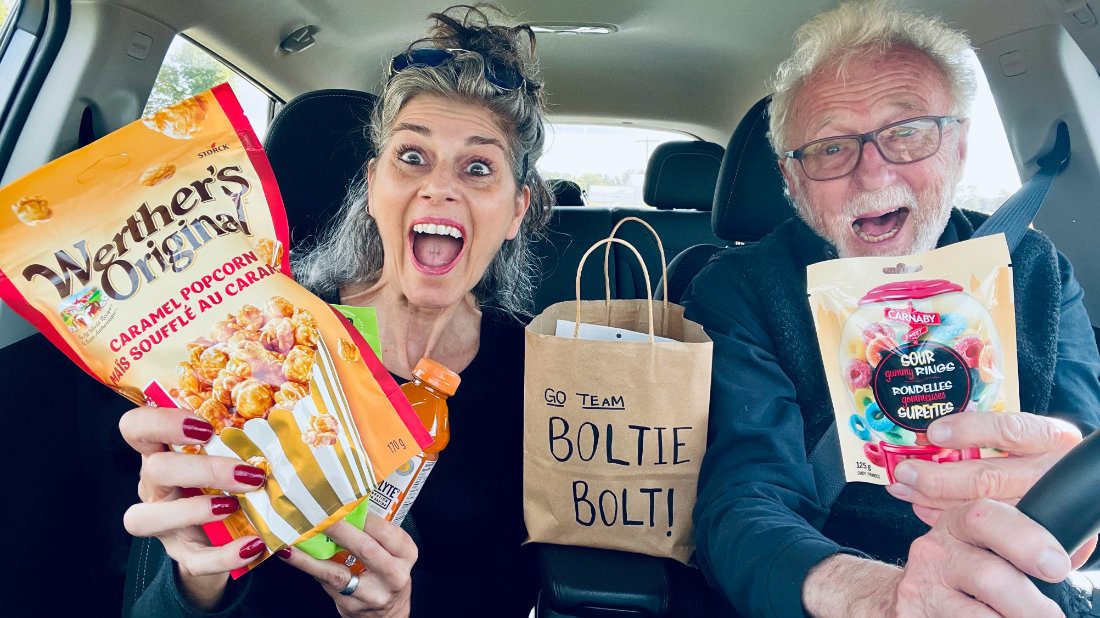 “I take to the open road, healthy, free, the world before me.” – Walt Whitman

I forced my brain to crawl out of its stupor. I’d only been asleep for an hour. I sluggishly peeled one eye open to see Garry towering over me.

“The charging station is clear now. We have to move the Bolt and plug it in.”

Ugh. As keeper of the eight charging applications I had downloaded to my smartphone (yes, I said eight), I was the designated charging member of our crew. Therefore, it was my duty to traipse down to the parking lot at midnight and plug into the newly vacated charging station.

It took me a few seconds to realize the rally was over. And that our team had won!

After five intense days of le Grand Rallye Électrique, where we drove from Halifax to Ottawa covering 3,091 kilometres in an all-electric 2022 Chevrolet Bolt, participated in many creative challenges and logged in at countless checkpoints, we were on our own time.

So why the midnight charging? In the morning, we would continue the long drive to get us and the Bolt back to Halifax!

Garry and I and the Bolt competed as a crew belonging to the GCD Énergie team in Le Grand Rallye Électrique / The Great Electric Car Rally. (Click here for more info)

Our team, consisting of our Bolt, Gino and Guillaume Dubé’s Tesla Model Y plus a media-driven Porsche Taycan, beat out three other teams, each comprised of two or three crews, all driving electric vehicles.

For all the scores per team, including the ranking of the individual crews, click here.

It was a tight contest until the very end. The crew driving the Ford F-150 Lightning from the BEQ Technologies team nipped at our heels every minute. In the end, our GCD Énergie team came out on top and our individual crew (me, Garry and Boltie Bolt) took second place over all 11 crews!

One of the main objectives of the rally, organized by Stéphane Pascalon and his team at the Fondation Québécoise d’Éducation en Sécurité Routière (Quebec Road Safety Education Foundation), through five provinces in five days, was to show that it’s possible to do long road trips, averaging 600 kilometres per day, in electric vehicles in somewhat remote areas.

Our worries on the five-day electric car rally

In the wee hours of each morning, my phone would vibrate on the nightstand. Impossible to ignore, knowing our trip captain, Stéphane, was posting the previous days’ results as well as the challenges facing us that day.

Every morning, a quiz would come through on the team’s channel. Each crew would have an hour to complete the quiz and submit it to the organizers.

A hidden station along each day’s route would instruct us to take a photo or video with a different theme. Get silly, have fun!

Our favourite was the challenge to write an advertising jingle for Electrify Canada, one of the many charging networks we used on the rally. We rocked that challenge!

Daily checkpoints along the route as well as some surprise assignments, like parallel parking, a back-up challenge and a mission to deliver a pizza within 30 minutes, would garner us points. We were so busy plotting and strategizing that we didn’t have the radio on once. The organizers sure kept us on our toes!

As did the charging, which ended up being our main impediment. Garry likened the terror of approaching a station to that of approaching an Eastern Bloc border at the height of the Cold War. Against some fierce competitors, many of whom were already familiar with charging infrastructure and technique, we did okay, hitting our stride by Day 3.

All crews fought over a very limited number of high-speed chargers on the island.

It took us well over an hour to get the station going. The app didn’t work. The helpline was anything but. I don’t think the guy on the phone even knew where New Brunswick was, let alone Edmundston.

As we sat there, sweating with stress, the F-150 Lightning pulls up at the neighbouring charger, driver plugs in, taps phone, and they’re off to the races. Grrr.

We plugged in and began charging with little fuss. Three other Bolts eventually appeared. We finished, unplugged and there, waiting to access our station was the F-150 Lightning. We have to confess. For a split second, we thought about blocking the Lightning and letting in the Mustang Mach-E waiting behind them. All is fair in love and rallies, n’est-ce pas?

Later, we heard that once the Lightning plugged in, all four stations shut down and no one could continue charging. Gasp! Now, this could be a nasty rally rumour, but the station did shut down. Cause unknown.

The charging experiences were a significant part of our five-day drive.

Instead of thinking about the limitations of charging – low number of chargers in eastern Canada, long charging times for some vehicles, confusion with how many networks and apps exist – it helps to appreciate the positive aspects of the charging experience: a chat with fellow chargers, time to tidy your vehicle, work on your challenges, go for a little walk, get through some emails, just be.

Ironically, the most hassle-free charging experience was the first time we charged once the rally was over. Plug in, swipe to start on the app and bam! We were ready to head east to see what Hurricane Fiona had left in her wake in our Halifax neighbourhood.

“We were miles away from our real lives.” – Maggie Stiefvater

For five straight days, we lived in a Rally Bubble and only about 35 people on the planet know what it was really like. We were in a news blackout, entirely absorbed.

Meeting and getting to know all the members of the teams was the best result of the rally.

Friends for life! People of all ages from enthusiastic students in their 20s to spirited 70 and 80-year olds accepted the mission whole-heartedly and threw themselves into the challenge for a worthy cause – the electrification of transportation.

Another immeasurable highlight of participating in the rally is the education Garry and I and all the participants received on electric vehicles, EV charging infrastructure, apps, apps and more apps.

Lowlights of the Rally

Well, I guess chips for dinner two nights in a row would classify as a low point but, in the spirit of rally, we savoured each chip as if it were a delicacy.

A road rage incident in a traffic jam caused by an accident on Highway 401 outside of Brockville deflated our spirits but not for long. There’s an a**hole in every crowd and we happened to find them that day.

And then, there was the cccccold drive through the Renous Woods in Central New Brunswick. No heat allowed! I’m so glad I brought my cozy boots, despite the added weight.

Rally by the Numbers

Day 3 – 809 km – Quebec City to Oshawa – Charged in Coteau-du-Lac (Montreal), in Brockville and overnight on the street in Oshawa at a Level 2 city station. The hotel’s parking garage fuses all blew once all the rally vehicles arrived and plugged in. Oops.

Day 4 – 594 km – Oshawa to London to Barrie – Charged in London, ON. No charging allowed overnight in Barrie so we knew we would have to charge before leaving Barrie the following morning. Luckily, we were the last crew to depart, and we knew the station would be clear by the time we got there.

Day 5 – 486 km – Barrie to Ottawa and the Finish Line – Charged in Barrie before departing and Huntsville.

Total energy consumed per vehicle on the 3,000-km rally

For the curious, the total energy consumed by each vehicle (see below) after travelling just over 3,000 kilometres on the entire rally shows that the Chevrolet Bolt is the winner in terms of efficiency.

Garry managed to one-pedal finesse our Bolt to an energy consumption rate of 14.6 kWh/100 km.

The one-pedal technique of driving, where lifting the foot from the accelerator slows and stops the vehicle, uses the electric motor to capture energy from the vehicle’s motion to recharge the battery and quickly slow down the car, saving usage on the brakes, too!

Check out the Facebook page of le Grand Rallye Électrique.

For all the scores per team, including the ranking of the individual crews, click here.

Many thanks and kudos to the organizers of le Grand Rallye Électrique! Congratulations on a superb event, extremely well-organized and thoughtful. We can only imagine the flurry of details and logistics behind the scenes. It was a truly memorable, informative and fun experience that we will cherish. Count us in for the next Great Electric Car Rally… Vancouver to Halifax?

Did our marriage survive le Grand Rallye Électrique? Well, we made it back in one piece, marriage intact. And we are both in complete agreement with Jack Kerouac.

“But we lean forward to the next crazy venture beneath the skies.” – Jack Kerouac