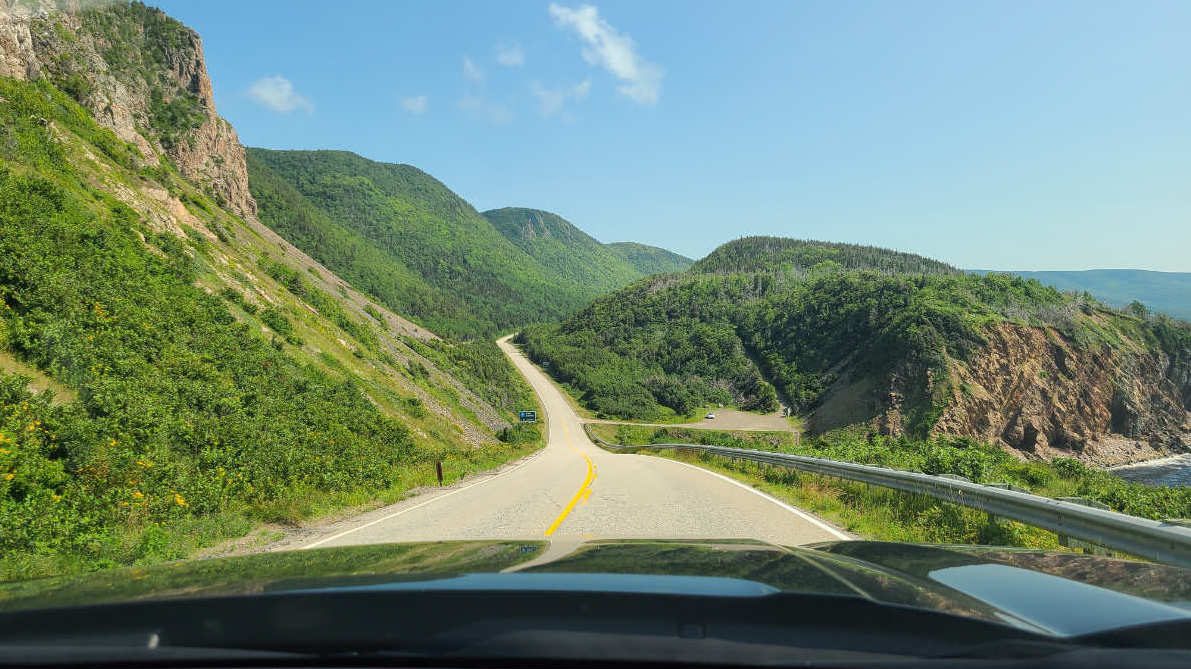 Wife Liz and I did all those things last month during a weekend trip to Cape Breton.

The famous Cabot Trail is known for its curvy roads, huge elevations and incredible views of one of Canada’s most popular islands.

Clearly a Porsche 911 or a Ford Mustang would have been ideal for the type of roads we would encounter. Then we found out what press vehicle would be our chariot for the trip.

A 2021 GMC Sierra. Hmm. Perhaps not incredibly ideal for the twisty roads, but at least the pickup truck’s 5.3-litre or 6.2 V8 engine would tackle those massive hills and inclines with ease.

Then Garry Sowerby informed me which of the two V8s our Cabot Trail cruiser would have: neither.

It turns out this half-ton truck was equipped with a four-cylinder. Huh? I try not to judge any press vehicle before I drive it, but my enthusiasm to tackle the Cabot Trail dampened a bit.

Liz didn’t care since she wouldn’t be driving and is a fan of trucks in general. Thinking of any positive thing to say about our press vehicle before we took off, I thought, at least it will be more economical than a V8.

It turns out, that is not the only thing the Black Turbo Edition has going for it. It has a lot going for it.

Firstly, that 2.7 litre four-cylinder is turbocharged and is good for 315 horsepower. That’s certainly nothing to sneeze at and would assuredly be adequate for those big hills. Secondly, when you fire up the engine, it doesn’t sound like a wheezy powerless engine that would be better suited for a Chevy Spark.

The 2021 GMC Sierra, with a turbocharged 4-cylinder engine, has the classic truck ‘grumble’ to it, enough to satisfy any skeptical truck aficionado.

After getting to the island, we made a couple stops. The first was at Big Spruce Brewing in Baddeck where they specialize in organic craft beer. Liz enjoyed a sample flight of some of their finest and then we headed to Iona via a short ferry ride.

We visited the Highland Village Museum, which offers “a living history museum and cultural centre that celebrates the Gaelic experience in Nova Scotia.” It is very neat touring through the 11 historic buildings and experiencing what life was like back in those days. But we had to cut our tour a bit short because it started to rain.

Our first stop to stay the night was Knotty Pines in Ingonish. They have quaint little cottages – all have water views of Ingonish Bay. When we got there, it suddenly became apparent that having a truck was very much a good thing.

The path leading to our designated cottage was not only a narrow dirt road, but there is a very steep hill you need to go down. That hill is riddled with potholes – some of which were quite deep. A Porsche 911 wouldn’t have made it through. But the Sierra was all too pleased to show off its capabilities for this type of road and handled it with ease.

By evening, the rain that had cut our historic tour short had turned into a monsoon. We still enjoyed the fabulous view and even had BBQ steak for dinner.

2021 GMC Sierra and your author tackle Franey’s Mountain. No problem for the Sierra.

The next day we went to Cape Breton Highlands National Park to do some hiking. We started with Franey’s Trail which was, what Liz thought, labeled as an ‘easy’ trail. It turns out it is one of the more difficult ones.

The whole trail is essentially upwards; you are literally climbing a mountain. The trail gave me a blunt reminder of how out of shape I am, but getting to the top is certainly worth it. Breathtaking views.

Getting to the parking lot for Franey’s Trail is also a steep incline made entirely of dirt road. While the trail itself nearly took me out, that steep incline was no match for the Sierra. 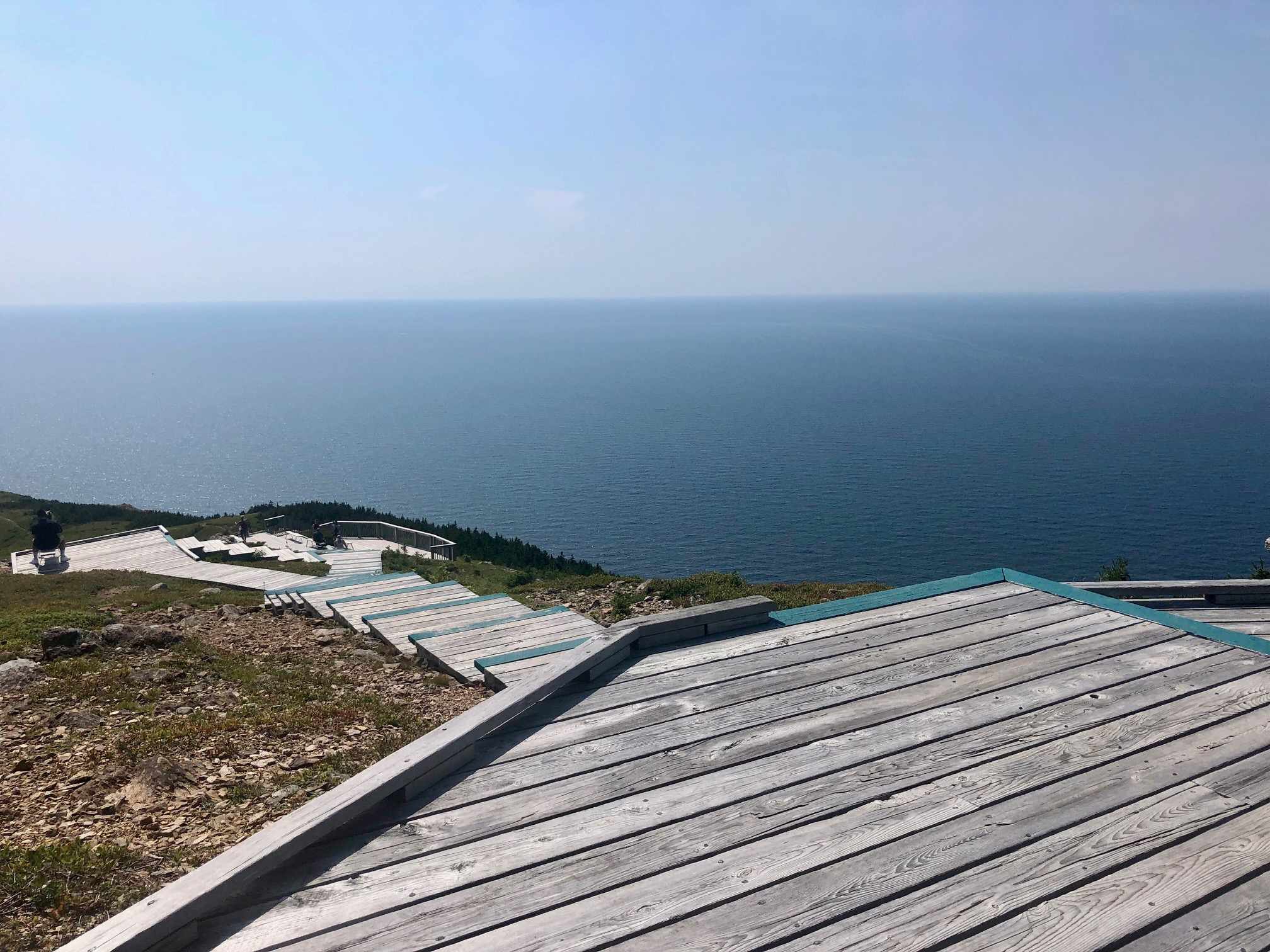 The rest of the trip included great meals at plenty of restaurants (I almost exclusively ate very delicious seafood) and ended with us camping for the last night on Ingonish Beach. 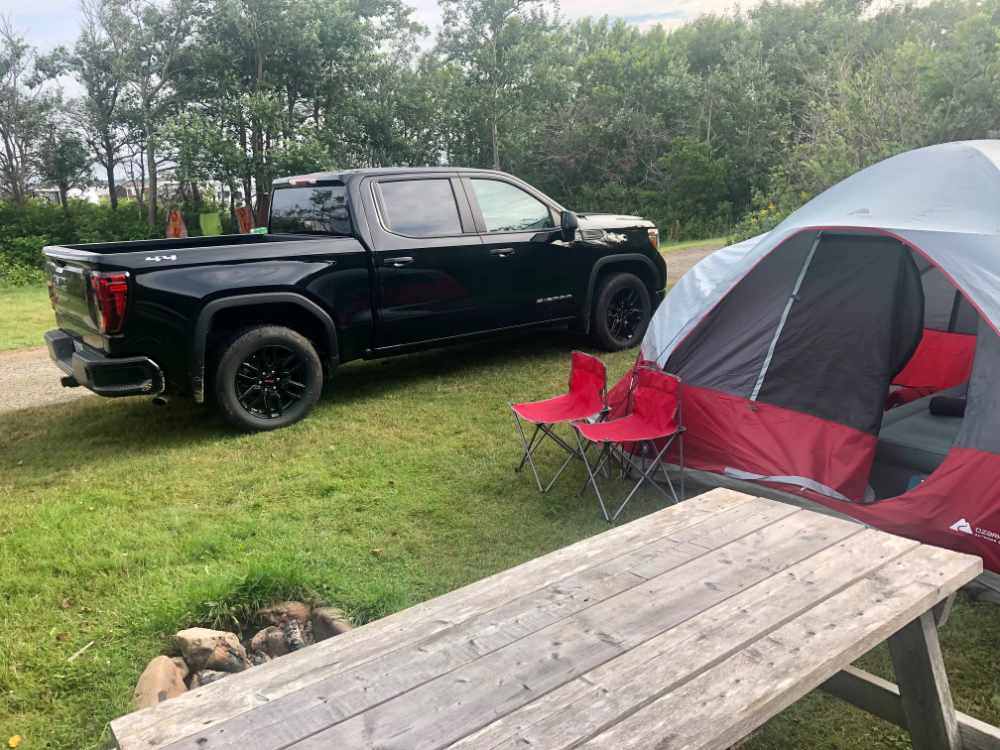 The beach itself is quite expansive and Liz and I took in some sea glass searching. Liz went into the water a few times (I’m not big on swimming) which was great until we found out a young woman was attacked by a shark not far from where we were. Yikes!

It was a much-deserved vacation and the Sierra deserves more than judging it for its engine.

In fact, were I in the market for a half-ton, the four-cylinder would be high on my list. Not only is it smooth, yet powerful, it provides good fuel consumption (we averaged 10.7 L/ 100 km for the whole trip), it still does everything a V8 can. 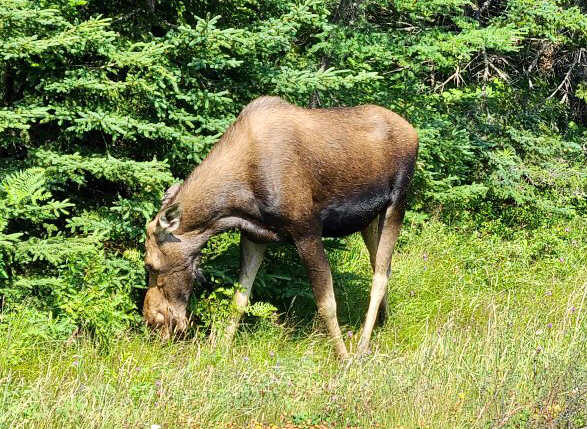 Don’t be like me and assume the worst before even driving it. Take it for a spin and you’ll be pleasantly surprised.