A four-cylinder engine for your pickup that delivers power and torque that would have crushed the V8 just a few years ago, while offering better fuel economy than the latest eight-cylinder, looks great on paper.

In the real world, where you need to move payloads and your acceleration isn’t monitored by officials taking a test, does it still add up?

We take a look at two versions of the GMC Sierra, one sporting that new 2.7-litre turbo-four and the other, the 5.3-litre V8, load up with cargo and find out if the little engine really can.

The smaller engine’s torque shows up way down at 1,500 revs and lasts longer. So it feels torquier.

The V8’s 355 hp is higher, too, but on the road the V8 feels the need for RPM to get the job done while the turbo-four offers a diesel-like pull even from low revs.

It’s hard to beat the rumble of a small block V8, but instead of an increasing burble, the 2.7-litre makes all sorts of delightful whooshing noises. This thing sounds full big-rig on the move, with a turbo soundtrack that’ll leave the kid down the block with their turbo-kitted Civic feeling absolutely crushed.

Both of these trucks are equipped with GM’s eight-speed automatic. The 10-speed can be had on only the top-trim trucks (with the V8s or diesel), and while the lack of extra gears do hold these trucks back economy-wise, they’re both on equal footing.

This Sierra Elevation, the red one with the V8, is also lacking dynamic fuel management. Thanks to the ongoing semiconductor shortage, that feature is missing from a massive number of 2021 trucks. Plus GMC thinks it’s only worth a $50 invoice credit, so it may not make a massive difference.

We planned to test each truck on the same 71-kilometre highway and rural route loop. Once empty, and once with around 1300 pounds (589 kg) of bagged topsoil in the box.

It was a hilly route, and the return leg was quite twisty and hilly meaning lots of braking and then acceleration. Yes, it’s a bit easier on fuel than driving through the stop-and-go city, but it’s more consistent as well as more realistic for Atlantic Canadians. And based on less controlled drives in town, empty and full, we believe that the end result would be the same, even if the figures would be a bit higher.

GMC estimates that the 2.7-litre Sierra Black Turbo we tested should return 13.3 L/100 km city and 11.8 highway. The V8-powered Elevation’s estimate is 15.2 and 11.1, Yes, that’s slightly better on the highway than the four, which had us curious as well.

Back to the actual testing.

First up was the bright red Elevation model with a bed full of sailboat fuel and a nice cool day so I wouldn’t have to use the AC.

After a bit more than an hour and 70.8 kilometres, I’ve averaged 10.4 L/100 km according to the onboard computer. Is this the most definitive way to capture fuel economy? No, but it works quite well and is consistent. Especially between vehicles that are the same make and model.

Consumption was slightly higher on the highway at speeds of 110 km/h, but came down on the back road segments, exactly as expected.

Next up, the same bright red truck with 60 bags of topsoil in the back simulating a hefty payload. I also have a passenger, because you’re not loading and spreading 60 bags of dirt solo.

The result this time? 10.8 L/100 km. I was expecting it to be higher, because it definitely felt like the truck was working harder, but the numbers didn’t agree. Which is why we use numbers in the first place. 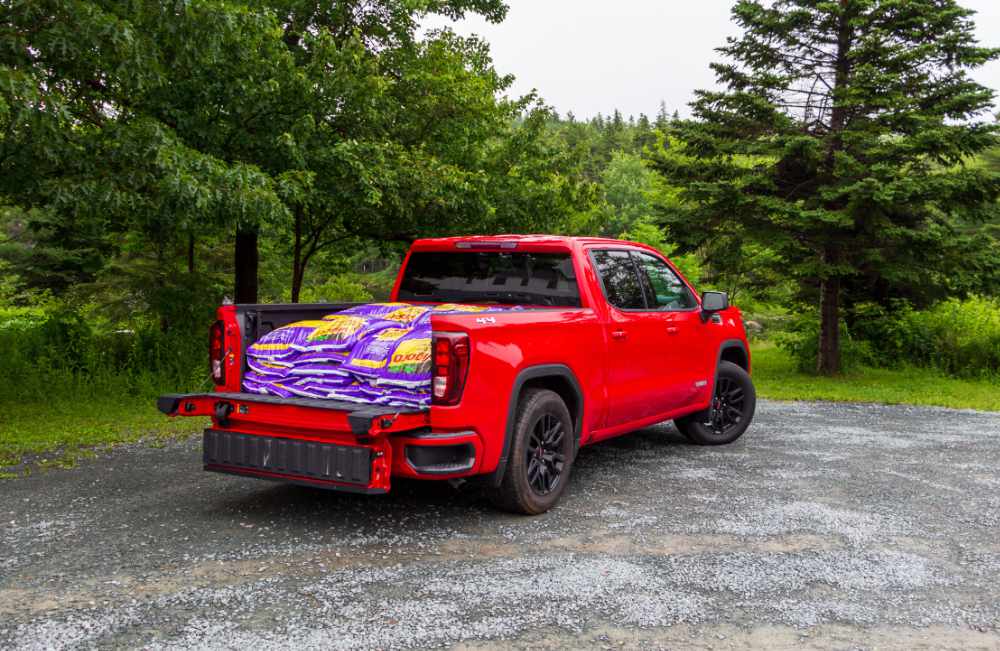 What about the 2.7-litre truck? Making the first attempt with the dirt, the most obvious difference was the Multi-Pro tailgate on the red truck. Say what you want about these trick tailgates, but even for this unusually tall tester, that bed step is a game-changer.

What gives? Does the 2.7-litre engine not save fuel after all? Should you pick the simpler V8?

The last run was with no dirt in the back, just the empty truck.

The fuel economy title was on the line. Could the four-cylinder half-ton pull off the win?

I had to resist driving it even more smoothly than normal to stack the result. A couple of acceleration runs cured that, and probably made me use a bit more fuel than I absolutely had to, but I did a few similar blasts to speed in both trucks to keep things fair.

Result? 9.6 L/100 km. That’s an impressive figure for a truck this size, especially with a gas engine, on some seriously hilly roads, and without this being a dedicated hypermiling run. This was me trying to drive like a normal person doing normal everyday driving.

Can the turbo-four save some serious fuel for you?

Looks like it sure can, and while it wasn’t part of this test, downtown driving showed similar results in favour of the 2.7-litre truck. If it’s empty, that is. Because a fully loaded pickup bed shows that the gas truck is just a bit more efficient on fuel.

What does that mean? It means that if you’re the average truck buyer who loads up the bed and tows to the lake a handful of times per year, then you’re probably going to save quite a bit of cash by going with the 2.7-litre engine.

If you’re driving a truck that will be towing and hauling day in and day out, then the V8 might be more to your liking. It’s why truck makers offer so many different motors.

The 2.7-litre turbo-four is no slug on the road. It feels as quick as the V8, and even stronger when loaded, thanks to all of that low-end torque. Then there are all of those fun turbo noises.

For a daily driver and summertime camping trips or wintertime snowmobiles? We’d pick the four. We just wish that GMC had installed a boost gauge, because that’s one of the best parts of any turbocharged engine.