Today’s East Coaster stopped off on the East Coast for a few days, on its way from the Far East, to its new home on Ontario.

When friend Tracey Clark found her dream summer runabout, she spent a lot of nights thinking about the logistics of getting the 1995 Suzuki Cappuccino from Tokyo, Japan to Brantford, Ontario.

She realized it was a right-hand drive car which added to the quirkiness of buying a car in Tokyo through an agency called Car From Japan. They handled many of the details, like shipping and engaging a broker to help at both ends of the shipping exercise.

The fastest way was to ocean ship it to Halifax, Nova Scotia via Baltimore, Maryland, then have it transported by truck to Ontario. Tracey gave us (Garry Sowerby and Lisa Calvi) a call to see if we would retrieve the car from the port and hang on to it until the truck picked it up.

After a day and a half email trail and a folder full of paperwork, I stuffed myself into the tiny Cappuccino roadster at the container pier in Halifax. It needed a boost and fuel, but once I got it started, I zipped home.

I don’t use the term ‘zip’ often when referring to driving, but it seems proper for a car that is not much more than two-thirds the size of a Mazda MX-5 with a 50/50 weight distribution that handles like a go-cart. At 3.2 meters long and weighing 725 kg, the rear-wheel drive roadster is a tiny machine. 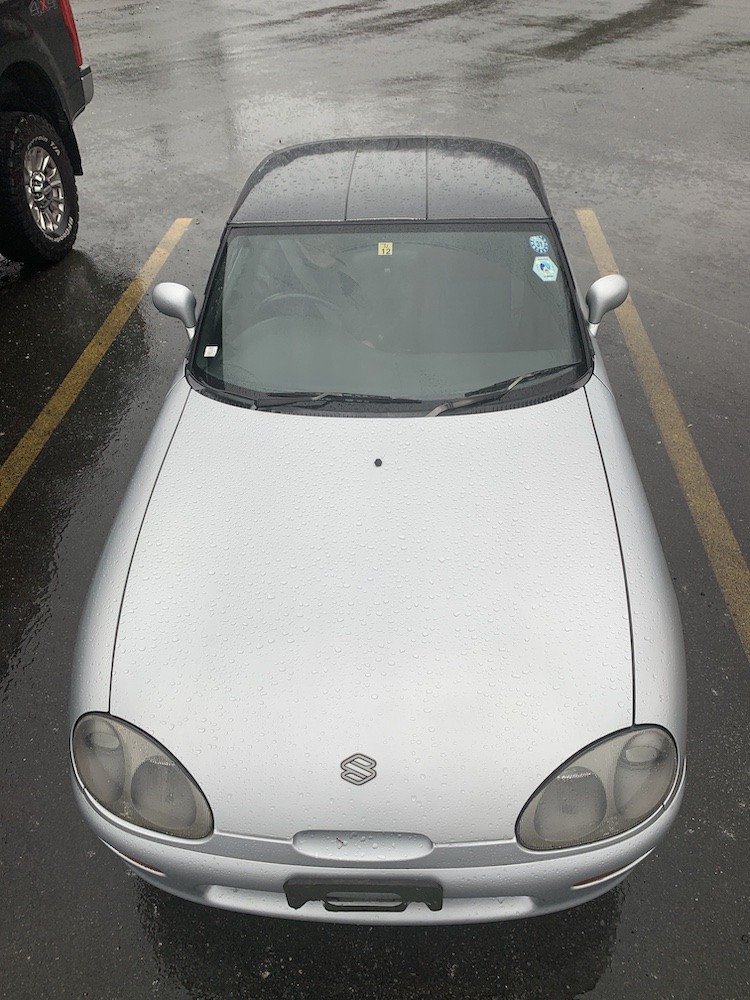 The 657 cc three-cylinder turbocharged engine revs to 9,300 RPMs and does a fine job supporting the Cappuccino’s zip factor.

There were a couple of minor scrapes and scratches on the body but the interior was in almost mint condition. I noticed a few interior bits were the same as in our 1991 Pontiac Firefly, essentially a Suzuki Swift.

The 25-year-old Cappuccino has only 85,000 kilometres on the odometer. The fun super-little detachable hard-top convertible had probably been someone’s second car and not a daily driver.

We like to think Tracey’s 25-year-old Suzuki Cappuccino has had a memorable weekend in Halifax, since leaving the streets of Tokyo, Japan, while waiting for its lift to Ontario.

It got to drive on the opposite side of the road for the first time in its life. Wide-eyed pedestrians swivelled their heads, wondering just what this pint-sized little car is.

It got its first taste of January in Canada and we are betting its last, since Tracey Clark has been excitedly referring to the perky petite Cappuccino as ‘her baby’.

Click here for a road trip story with Lisa and Tracey!

Of course, Tracey was concerned about the condition it was in and what I thought of the interior.

But the recurring question, ‘Is it fun to drive?’ was an easy one to answer.

Lisa takes the right-hand drive 1995 Cappuccino for a spin in the video below. Hang on, Garry!