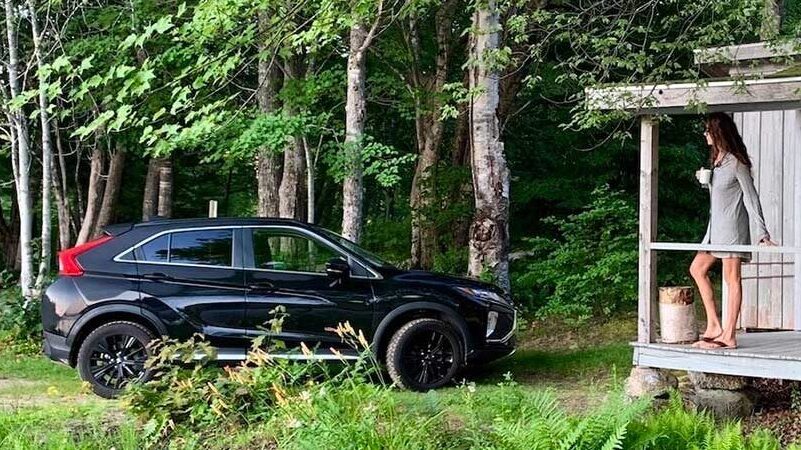 Rolling the dice on a Nova Scotia road trip

Is life as a human but a chance moment on Earth? Do things happen for a reason or is life simply a roll of the dice? I have a good life, a loving husband, a cool and challenging job where no two days are alike. I’ve worked hard but appreciate I’ve been lucky.

Why this mid-summer comtemplation? A last-minute schedule change meant six open days and a chance for reflection. What better way for a human to contemplate life but a road trip?

I had no desire to leave Nova Scotia during its resplendent summer but I wanted to drive to a place I’ve never driven, do one thing I’ve never done that would take me out of my comfort zone and watch sunrise everyday.

That was easy. The driveway offered a 2019 Mitsubishi Eclipse Cross Black Edition, whose 18-inch black-painted alloy wheels, glossy black exterior and interior details and signature Black Edition badging, would match pretty much everything in my closet. 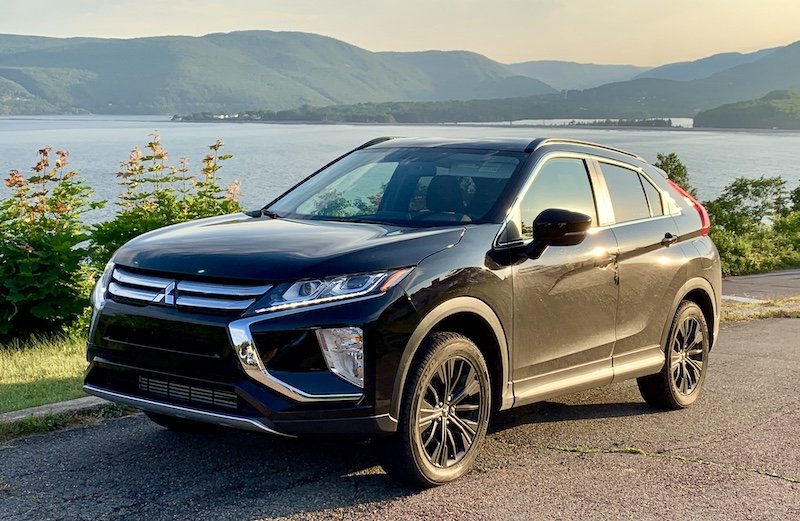 I figured the stylish crossover, equipped with Mitsubishi’s all-wheel drive (S-AWC), the number one reason why consumers are buying this vehicle, would handle whatever roads and driving conditions the province would throw at us.

Fun and games were in order. We would roll a die each evening, which would decide the theme of the following day. We dubbed our 100-hour vacation ‘Dicey Nova Scotia’. 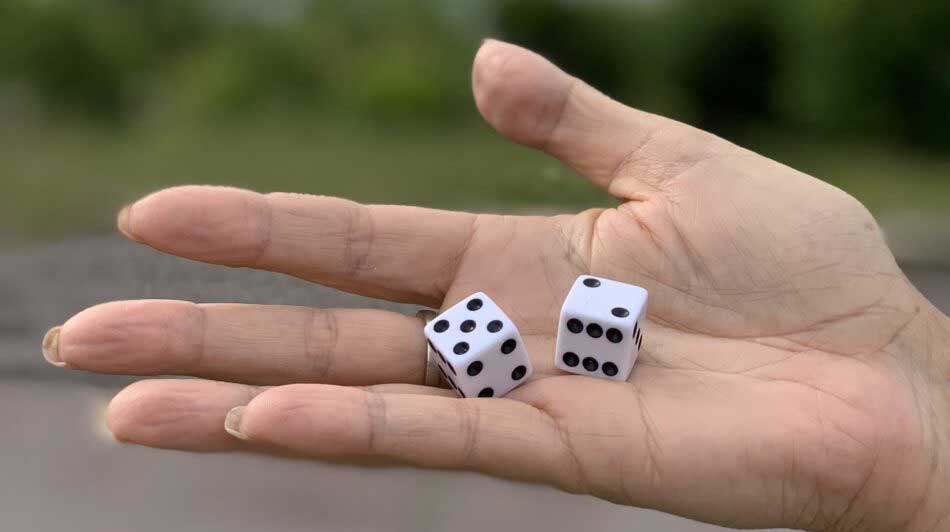 Rolling a 1 meant everything that day had to relate to food. If we rolled a 2, we had to insert some music and/or dancing into our roadtrip that day. A 3 was for friends and fellowship – meaning we had to talk to complete strangers at some point in our travels, obviously not difficult in friendly Nova Scotia. Rolling a 4 meant we had to learn about the culture of the area.

Friends from Ontario, Tracey Clark and Ron Fine, would join husband, Garry, and me for the first few days. We had never travelled together before but figured a road trip was the perfect way to get better-acquainted. We rolled a 3 for our first day together – Perfect. Friends and Fellowship. The first-time visitors to NS were enthusiastic, cheerful and eager to see as much as possible.

First, and requisite Nova Scotia stop: Peggy’s Cove. We were all completely charmed by the lighthouse, the magnificent rocks, the sparkling ocean and, oh, those best-ever lobster rolls we devoured from U-Cook Lobster Food Truck. 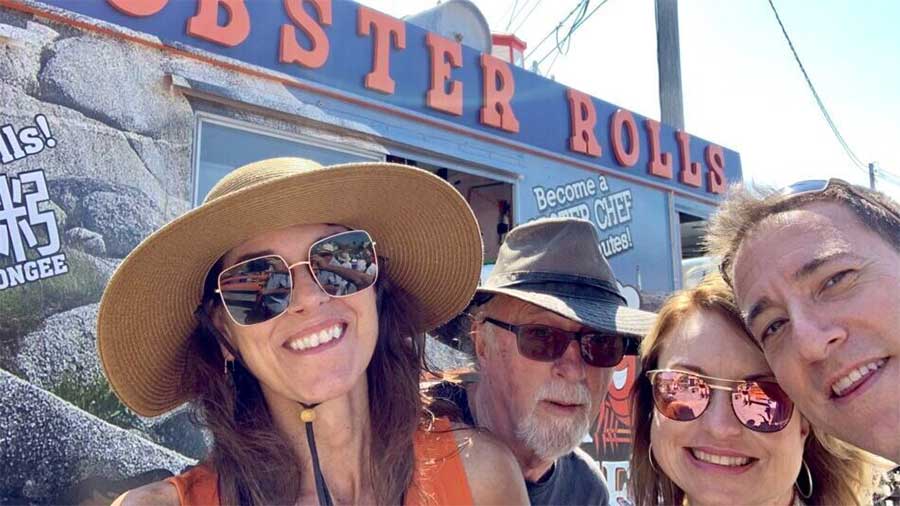 Departing Halifax early the next morning, our first highlight would be a front-seat viewing of the Tidal Bore at Truro. The elegance of the tidal wave that unfurls its way up the Salmon River from the Bay of Fundy is a must-see-and-hear phenomenon that belies the force of nature that causes the highest tides in the world, twice a day, every day for millenia.

From there, I plyed the Mitsubishi Eclipse Cross across the province to drive a couple of roads I’ve never driven before.

Routes 245 and 337 wrap around the coastline from New Glasgow to Cape George to Antigonish. At Arisaig, we perched high atop a bluff at Steinhart Distillery, feasted on schnitzel from the on-site Schnitzel Shack (say that five times fast!) and gazed across the Northumberland Strait at Prince Edward Island in the hazy distance.

The bottle of hand-crafted maple vodka that followed me home is waiting for a special occasion when we’re ready to relive the magic.

Cape Breton, with its world-class curb appeal, had to be on the Dicey Nova Scotia list.

I was excited to throw the Eclipse Cross into the tight corners of the dramatic and renowned twisty, turny Cabot Trail, one of the planet’s top drives. Veering off the Cabot Trail up to Meat Cove is worth the detour and follows road trip rule #1 – always drive to the end of the road.

On the western side of Cape Breton Island, we got out of the Mitsubishi at a breath-taking overlook and were rewarded with jaw-dropping views of the Gulf of Saint Lawrence. The four of us felt pretty lucky as we inhaled the warm air that floated up the side of the mountain, the coastline in all its rugged glory splayed out before us, stretching into the summer haze. 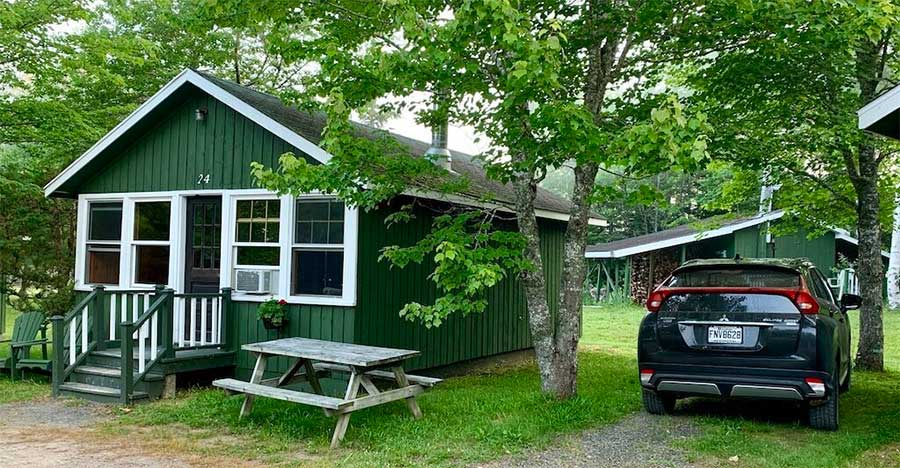 We were lucky to have scored cozy cabins at the lovely Normaway Inn, a hidden gem tucked away in the Margaree Valley. We felt even more so when we found out about the entertainment that evening in the Inn’s famous Barn. The fiddling madness of Ashley MacIsaac blew us all away, as did Mary Elizabeth MacInnis’ genius fingers on the keys and the sweet notes belted out by her talented daughter, Sarah MacInnis.

I’m sure the cheers and applause from the 150 or so humans crammed into the Barn that sultry evening could be heard clear over to Inverness.

Cape Breton really is about kitchen parties, fiddles and dancing. With square-dance caller Bill Cameron on the microphone, even clumsiest of dancers (me) could feel like a pro. ‘Gents on the left, ladies on the right… Turn to your own…’.

Dancing while Ashley fiddled was one of those unexpected magical moments of our Dicey Nova Scotia 100-hour vacation.

Before dawn the next day, another magical moment, when I opened the door of our quaint cabin. I felt like the only soul awake in the world, except for the horses in the nearby field. With the sun not yet up and a fog laying across the valley, I pattered across the dewy grass. Just as I reached the field, a meow behind me heralded a black and white cat, making a beeline for my ankles. I stooped to chat and pat the friendly feline. Two of the magnificent horses swooped down their giant heads to get in on the action. I felt like Dr. Doolittle. 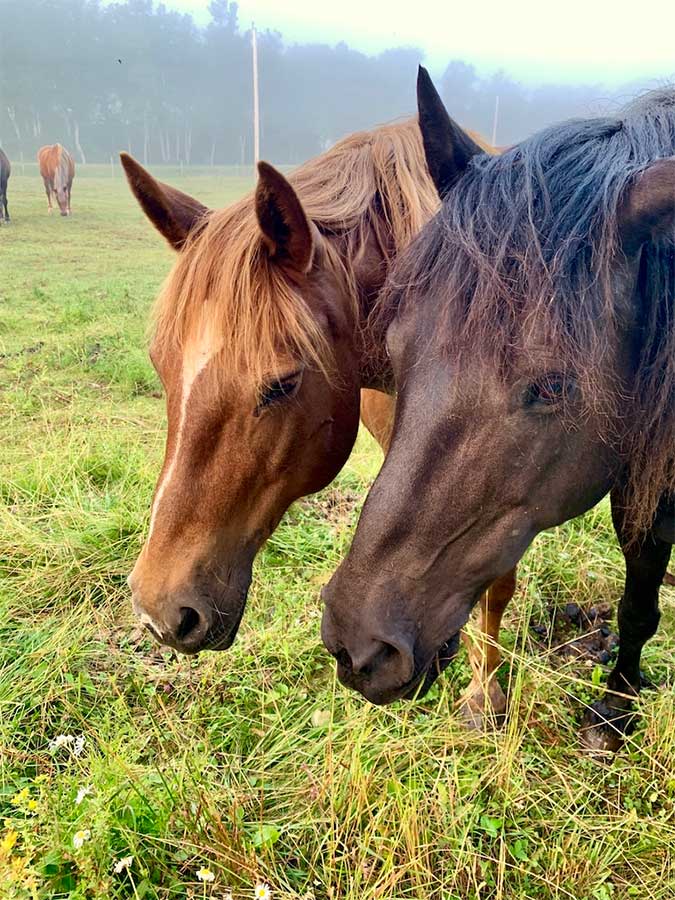 We bid a sad farewell to Ron and Tracey, my kindred map-loving spirit. We rearranged ourselves in the Mitsubishi Eclipse Cross, remarking how comfortable it had been despite carrying four adults with their dancing, hiking and road-tripping gear and how the handsome vehicle had done such a good job getting us down the road in Black Edition style.

The slick Tarmac Black paint was covered in dust and dirt from being decidedly off-tarmac.

Our road machine wore a look that said mission accomplished, what else have you got?

Dicey Nova Scotia wasn’t over yet. We motored to the other end of the province, excited about the last two days of our 100-hour getaway. We rolled a 6 for Adventure the next day.

Another misty, foggy morning, this time on Geier Lake, I awoke after being lulled asleep by a bullfrog symphony, in a rustic, quintessentially Canadian, cabin at historic Milford House. Each cabin is lakeside with its own wharf, also known as the perfect sunrise yoga platform. 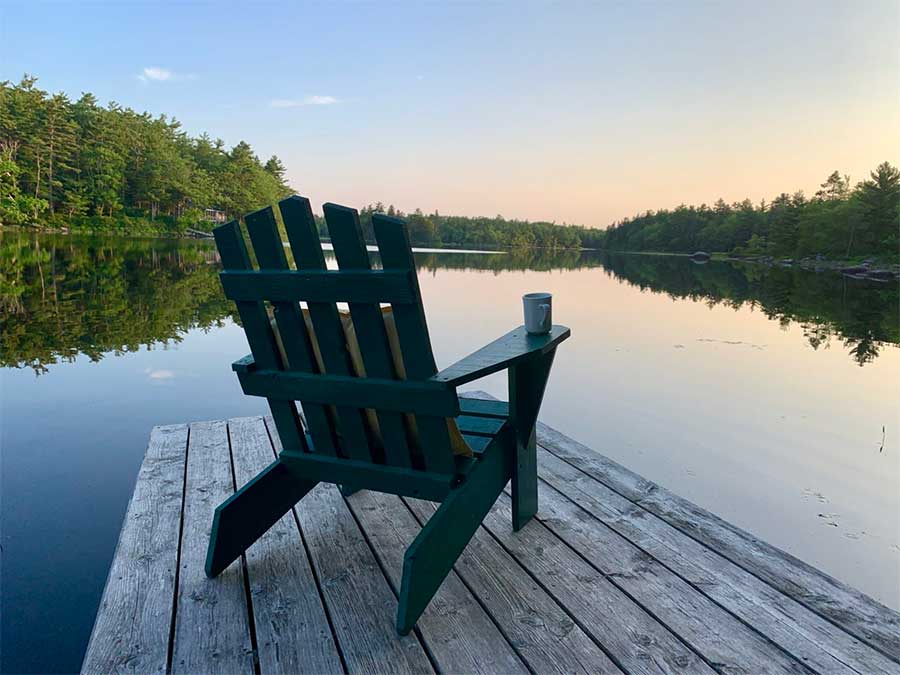 Driving to Digby Neck, a jut of land hanging off the coast, reaching into the awesome Bay of Fundy, was an adventure involving two ferry rides. On Brier Island at the very tip of the province, I found a plaque dedicated to adventurer-extraordinaire, Captain Joshua Slocum, who had lived nearby before becoming the first man to sail around the world alone in the 1890s. 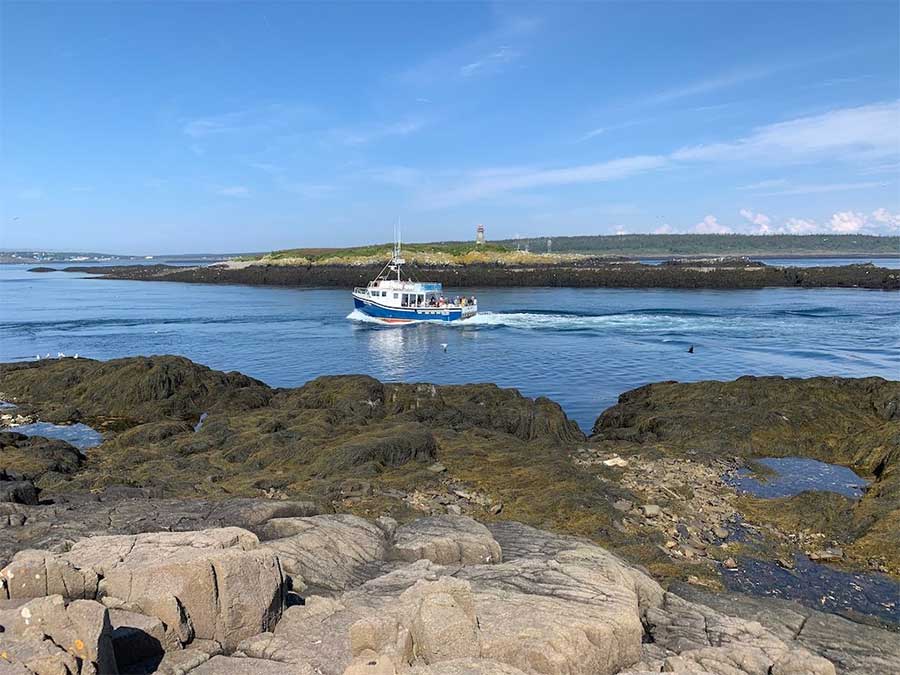 Adventure, of course, is relative. For this city girl, taking a canoe onto a lake, not falling in and paddling it myself was my out-of-my-comfort-zone mission. 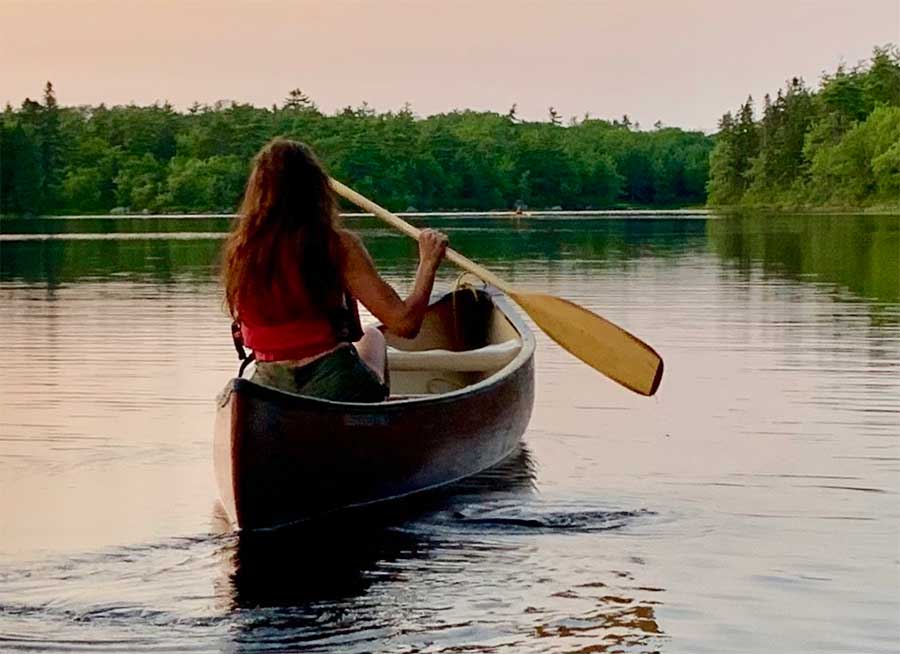 Mission accomplished. I also built a fire, did yoga on the ocean floor and watched the sunrise every day. And I ate pancakes. And scallops. 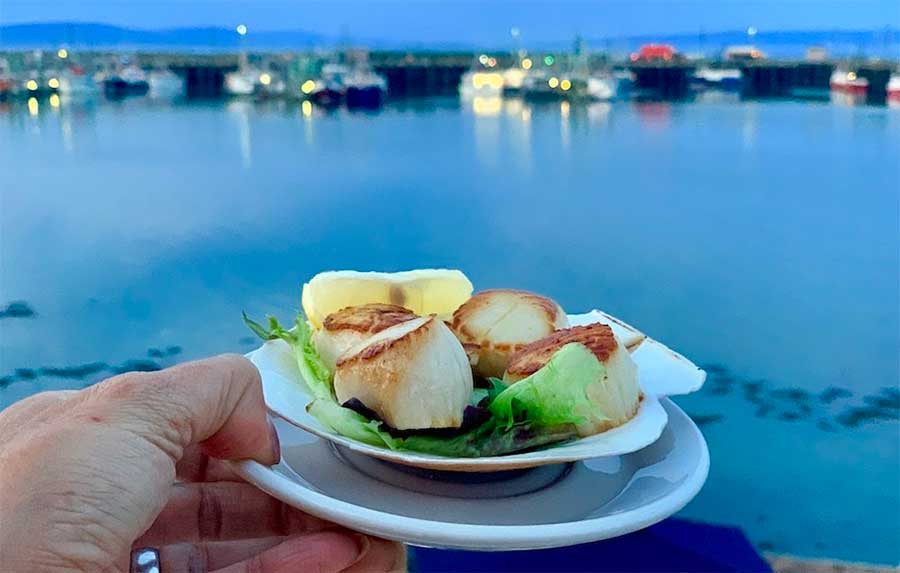 Then I rolled a 5 for Romance. Obviously, the adventure ends here for you, my dear reader.

I bid a silent thank you to our small but mighty province for offering up such varied roads and wondrous geography. Thank you, also, 2019 Mitsubishi Eclipse Cross for your superb handling of 1,875 kilometres and getting us to Nova Scotia’s tranquil coves, hidden beaches, sculpted coastlines, reversing rivers, lush valleys, rocky lakes and mystical capes where the roads end. 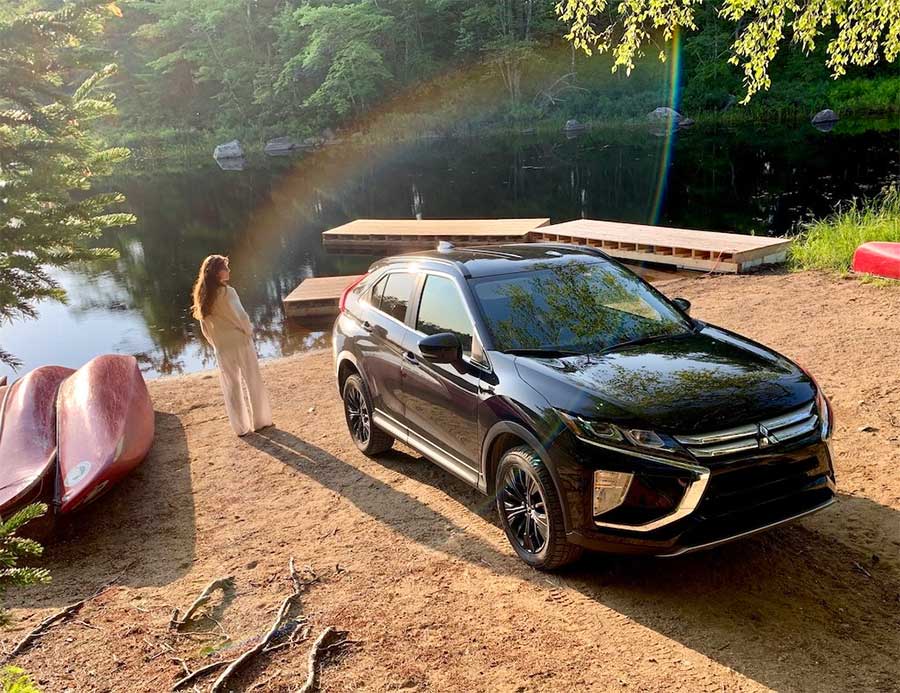