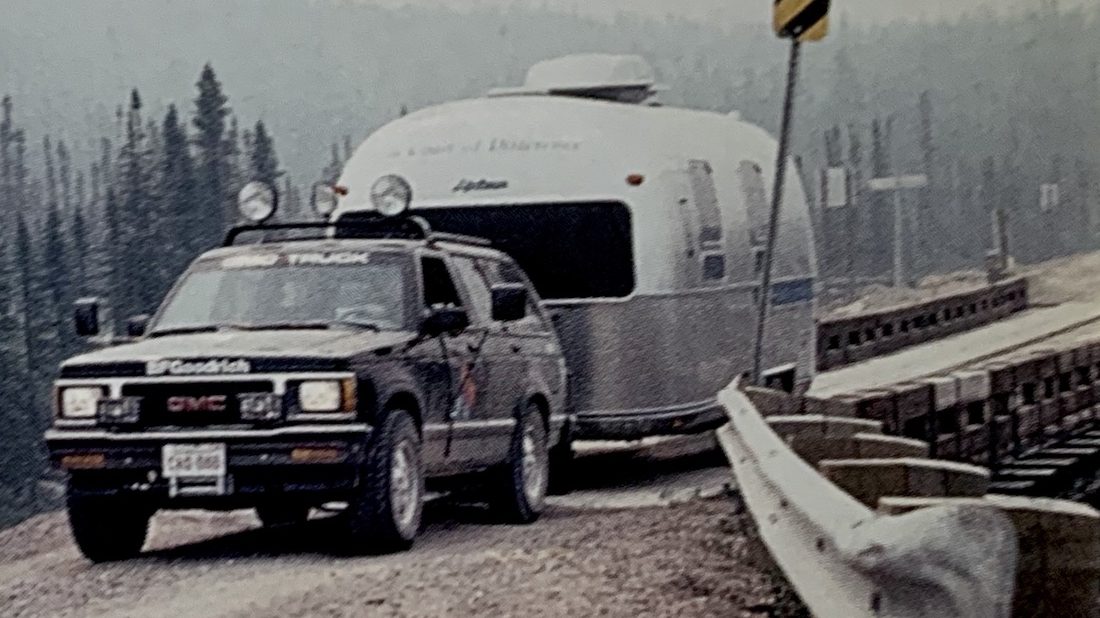 July 1991 – The Trans-Labrador Highway was about to open, establishing a road link between Labrador City and Goose Bay, across a land where caribou out-number people eighty to one. Sounds like the perfect vacation spot!

The silence was broken by what sounded like the report of a high-powered rifle. My eyes flashed to the side mirror. Smoke was everywhere from forest fires that had been burning for weeks so I hit the four-way flashers and pulled over.

The noise evolved into a discordant symphony of thwacking sounds accompanied by a continuous high-pitched hiss. A black hose thrashed wildly between my GMC Jimmy and the eight-metre long Airstream travel trailer hitched to the rear.

One end of the hose was attached to a propane tank mounted on the Airstream, while the other end sprayed highly volatile propane gas into an atmosphere choked with smoke.

“Close that valve!” I yelled to Ron King, a journalist from Knoxville, Tennessee who was traveling with me.

Ron didn’t hear. He was already out the door, scrambling for the valve that would pacify the berserk serpent. A Cadillac towing a U-Haul trailer drifted by. I watched the words ‘Adventure in Moving vanish into the smoke as Ron shut the valve. He was shaking when he got back in the truck.

It was the summer of 1991 and we were driving from Moncton, New Brunswick to Goose Bay, Labrador. The Trans-Labrador Highway was about to open, establishing a road link between Labrador City and Goose Bay, across a land where caribou out-number people eighty to one.

We would camp in an Airstream trailer towed by my 1991 GMC Jimmy.

Ron and I had left Moncton on a cool July morning. He had flown up from steamy Tennessee and appreciated the lack of humidity.

The tandem-axle Airstream was packed with food, music, plenty of fly dope and a thousand bits and pieces. It was hitched to the Jimmy by a series of chains, wires, cantilevers and parts with the word EA-Z-Lift emblazoned on their sides that looked like they had fallen off a UFO. 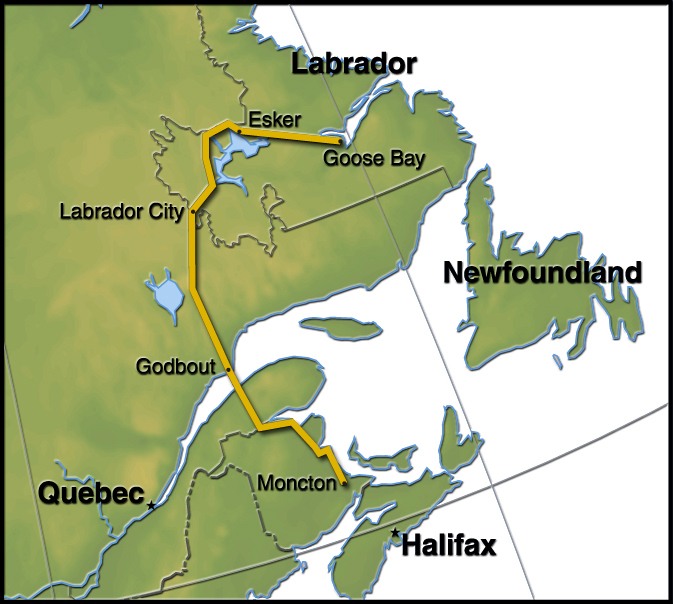 There was smoke in the air upon arrival in Matane, Quebec on the south bank of the St. Lawrence River. We caught the next boat to Godbout on the north shore. There, police dictated we join a vehicle caravan up Route 389 toward Labrador City, 640 kilometres north. The smoke in the air was from forest fires burning in the area.

Lining up behind 12 vehicles, some with canoes strapped to their roofs, others with trailers, Ron noticed a Manic 5 road sign with an arrow pointing up the road. We wondered what it meant.

A mud-splattered Cadillac towing a U-Haul trailer was last in line and we were right in front of it. An hour and a half later, it would blow by us as we wrestled the renegade propane hose.

We never did rejoin the convoy but the smoke eventually cleared. The next two days were spent settling into the drive. There was dust to eat on miserable stretches but, at times, we cruised on smooth blacktop. Manic 5 turned out to be part of one of the largest hydroelectric projects in the world, not a camp for exiled maniacs. 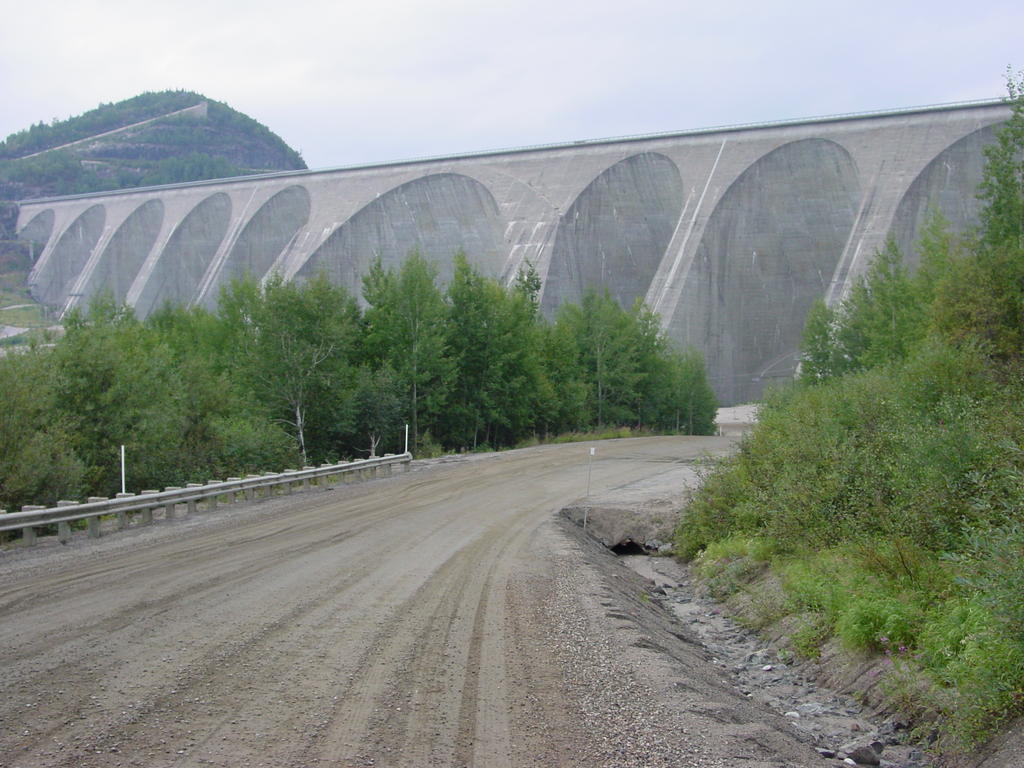 It was hot and dry at Duley Lake Provincial Park’s campground west of Labrador City. A Ranger warned we may have to evacuate because of a forest fire 20 kilometres away. We set up camp, watching water bombers skim loads from the lake then vanish toward the flames on the horizon.

Later, Toronto photographer John Stephens’ airplane arrived at Lab City airport from Toronto and the three of us swapped stories back at the lake. The following morning, John and I dropped a sunburned, fly-bitten Ron King at the airport.

The 530-kilometre road from Labrador City to Goose Bay was finished except for a 20-metre section of bridge over the narrows of Ossokmanuan Lake. Our only crossing option was a construction barge too small for the trailer, so we backtracked 160 kilometres to Labrador City and waited for the train.

The train bound for Schefferville, in Northern Quebec, carried freight and an assortment of automobiles, trucks, and schoolhouses. Four passenger coaches were connected directly behind the trio of locomotives.

Cheerful workman chained our rig to a flatcar then John and I stowed away inside the Airstream for the ride to Esker, where an industrial access trail lead back to the ‘highway’. 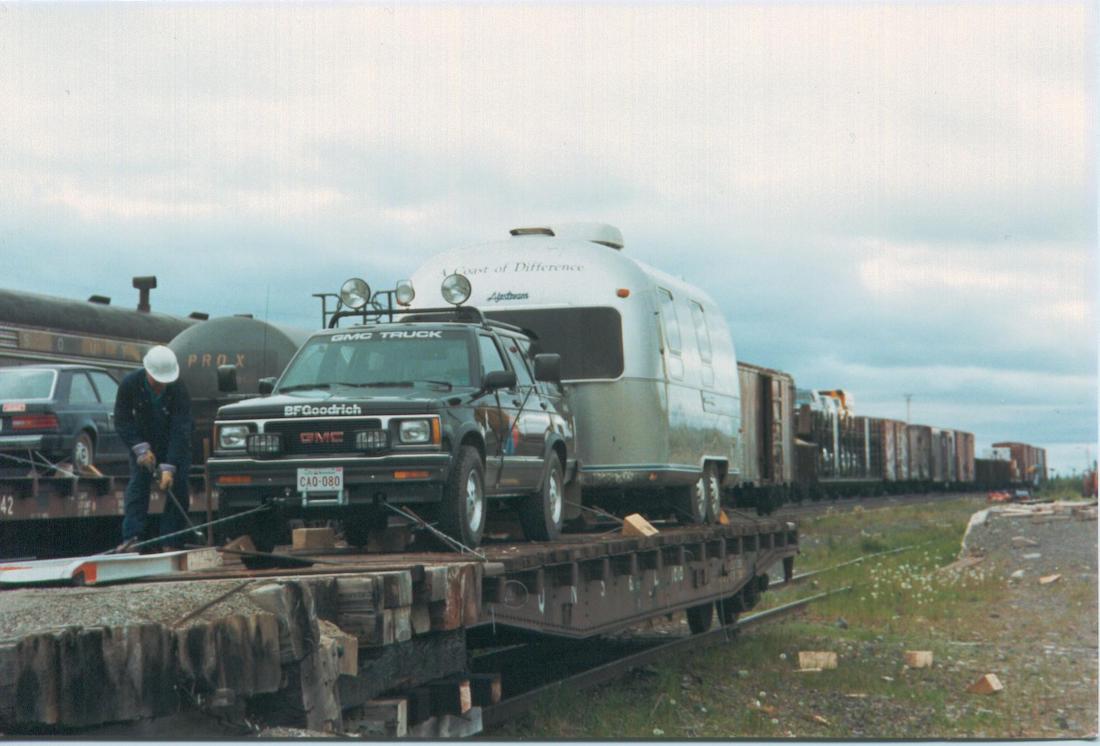 “The brakes feel weird,” I told John, after unloading in Esker four days behind schedule. I crawled under the trailer and found severed wires to all four electric brakes, prompting a new vacation rule – Keep a sharp eye on cheery rail workers when they chain your trailer to a freight train.

“Hope there’s no steep hills ahead,” John laughed, smearing more fly dope on his neck. But there were and we hauled our silver albatross up and down plenty of 12% grades taking 14 hours to cover the 320 kilometres to Goose Bay. 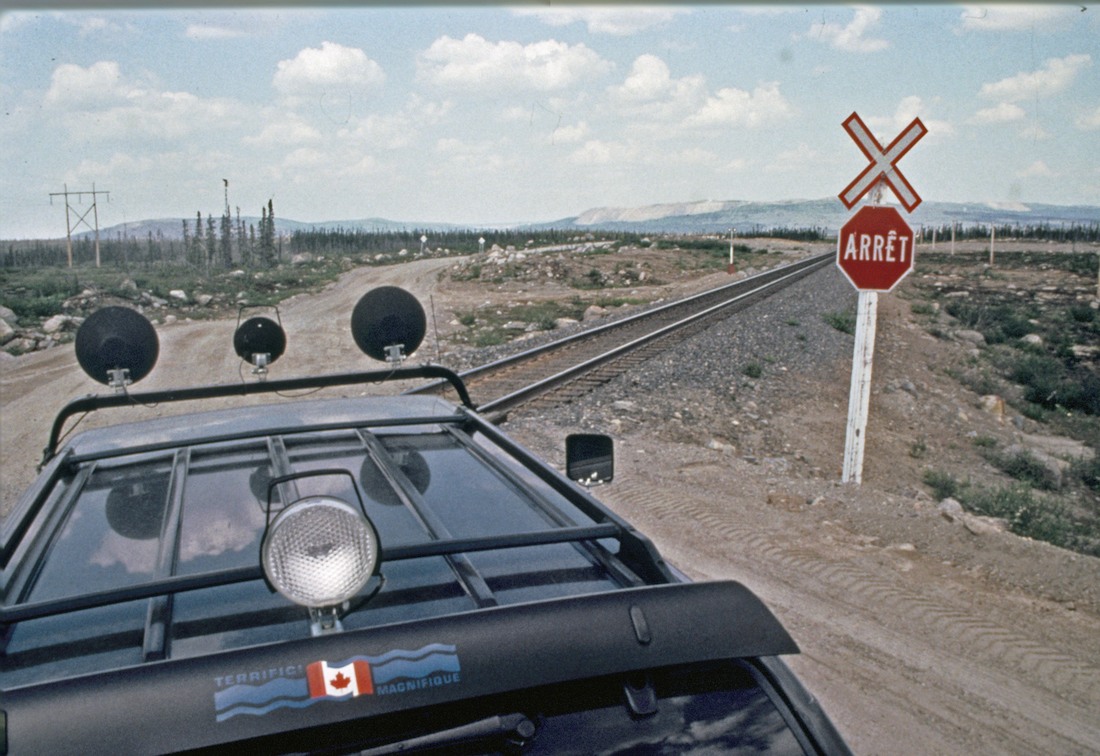 There was no time to fish, so John fried up a pan of frozen fish sticks while I tried to repair the trailer brakes.

“There’s three kinds of flesh eaters here,” I joked, scratching my way through the pathetic meal. “Mosquitoes drill holes in your arms and neck, while blackflies remove little hunks of skin. I haven’t fought one of those horseflies yet.”

But there were no telephone calls, no hassles and no errands to run. 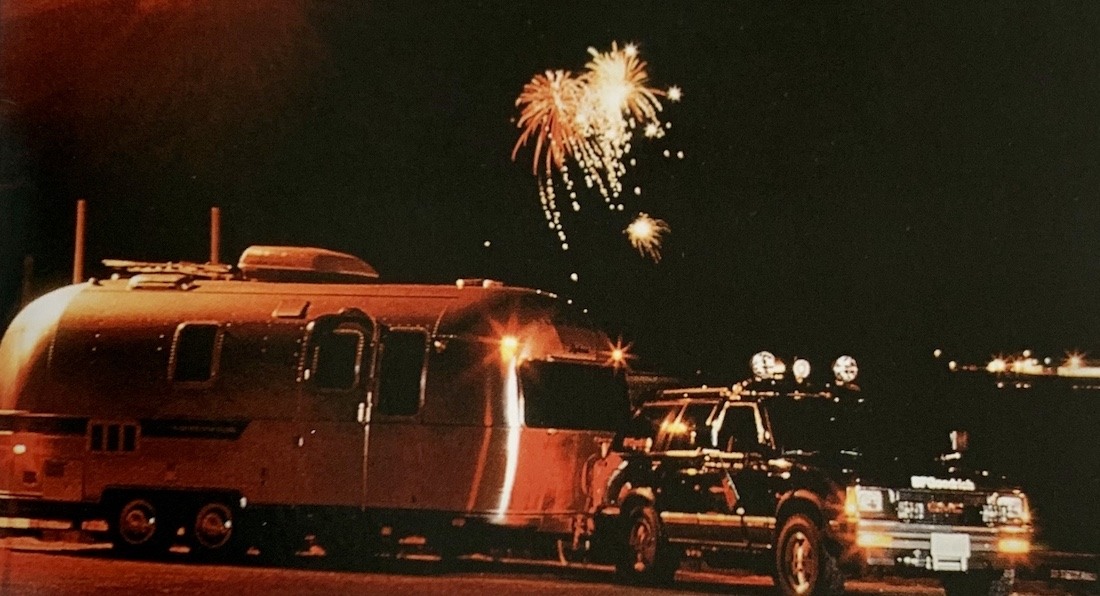