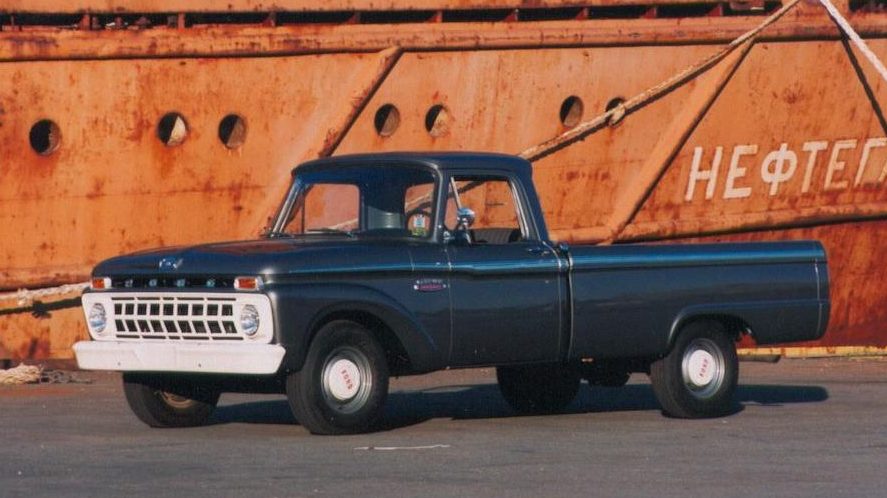 It took 30 years for Garry Sowerby to realize his dream of owning a 1965 Ford F100 pickup truck. Now, he tells us, it’s time to move the truck along to another owner.

My dad ordered a new one when he started his Moncton-based plate glass and storefront contracting business in the mid-1960s.

I was 16 years old at the time, and even though there was a new Mercury Park Lane in the driveway, my vehicle of scrounge for those high school years was that gun-metal grey F100 pick-up.

It had a 352 cubic-inch, 208-horsepower V-8 engine, a three-in-the-tree column shifter and Ford’s all-new ‘Twin I Beam’ front suspension. An optional $35 body length polished-aluminum molding stretched from the front of the hood to the tailgate. 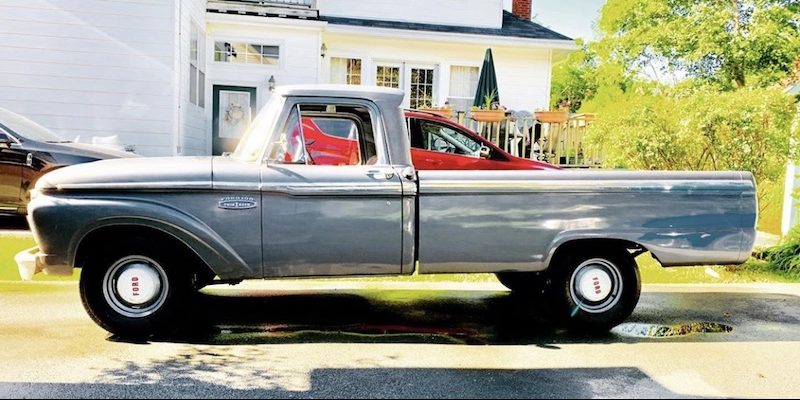 I used it for dates, cruising the strip and hauling garbage to the dump. It was one of the few V-8 pickup trucks in Moncton at the time. After its work week in the glass business, I’d detail it for Saturday night junkets.

Thirty years later, in 1996, while planning a cross-continental trek for an auto manufacturer, I spotted a similar 1965 F100 Ford at a radiator repair shop, just off the main drag in Bandera, Texas. It was blue, but had the same options as the one my father had three decades ago. I left a note on a business card on the windshield, inquiring if the owner was interested in selling.

Three weeks later, a lady with a Texan drawl called from Bandera. She was a dog breeder and had owned the truck for 30 years, had just bought a new V-10 Dodge extended cab and was willing to part with her old Ford for $1,500.

I didn’t even try to beat her down.

She recommended a local body man who, for reasonable compensation, would paint the faded, rust-free truck gun-metal grey. I wired her the money and made arrangements for it to be left at the body shop.

A month later, I flew to Texas to find my purchase in a discouraging state of disassembly.

For a week, I coaxed Mr. Bodyman, who seemed more inclined to binge on illicit substances than doing bodywork, to slap the eyesore back together. I then headed out on the 5,000-kilometre drive back home to Halifax.

An hour out of Bandera, the engine dropped a valve. The next four days were spent baking inside the 31-year-old sweatbox while half-expecting the engine to self destruct.

I felt like King Yokel, pulling into service centres in the sputtering, half-primed F100, sweating like I’d just run the Boston Marathon.

But, even with the engine running on seven cylinders and the eight-track tape deck seized, I began to love the truck.

In Halifax, the engine and much of the drive line was rebuilt. It definitely lacked social acceptability, but the old Ford ran like it would go forever.

I tracked down many original parts for the body and interior including windshield mounting rubbers, cat’s whiskers for the door windows, tail-light lenses and a new rubber floor mat. I also ordered two large boxes of bits and pieces.

Then I drove it to Toronto where a body shop agreed to work on it in their ‘spare time’. 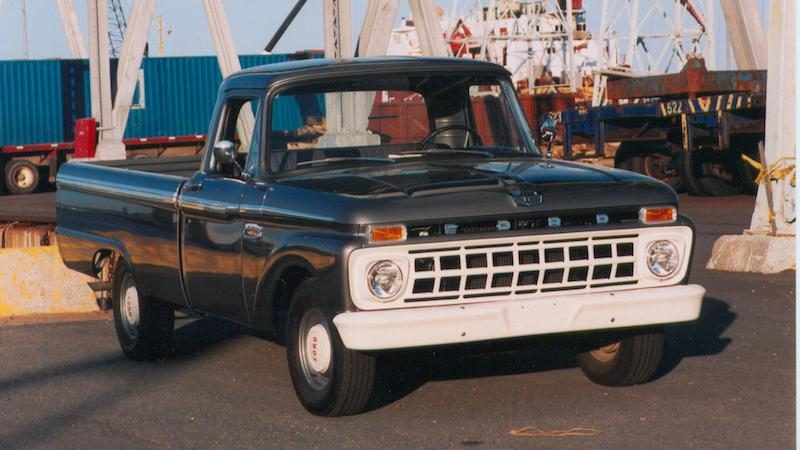 A year later, the only thing that had been done over was the tailgate. The rest of the truck looked as rugged as it did when I had dropped it off.

Fast-forward two years, it still looked the same as when headed north out of Bandera, Texas. Except for the tailgate.

Back in Halifax, I met Bryan, a former musician, who meticulously restored one or two vehicles a year. He agreed to finish the pickup truck, but would need it for six months.

“Where do you start?” I asked, eyeing the gnarly rig parked inside Bryan’s humble back-yard shop.

“I take a door and I work on it until it’s done,” he explained, rubbing the tailgate with a disapproving look.

“Then another door, then a fender or the hood. I don’t get wrapped up in dreams of completion. I enjoy working on each piece and do the very best I can. Progress eventually motivates me through the bits I don’t like to do.”

Over the next few months, while setting a new around-the-world driving record, Bryan’s advice helped keep my morale up.

If I was in a funk, feeling like the road from Tehran to New Delhi would never end, I would think about Bryan back home, redoing the tailgate. One piece at a time. Make the most of getting to New Delhi before thinking about the road from there, south to Chennai.

Bryan finished the body and paint work 18 years ago with the exception of the grill and front bumper that required a seemingly mysterious Wimbledon white paint.

Is it worth the time and money spent restoring a 55-year-old pickup truck? You bet!

I moved the truck back into our garage. Over the following two years, the last bits were installed and the interior was finished.

On its first day on the road, I decided to take a load of garbage to the dump. Wife Lisa was keen to get in on the big event since it was the first real job for the truck. I felt a sense of accomplishment because the old Ford had turned out even better than expected. 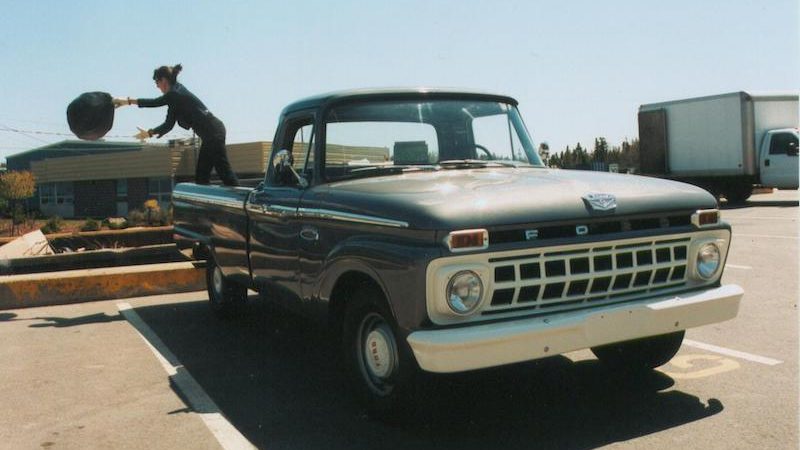 The purr of the dual exhaust, the view out the windshield and the feel of contorting my arm over the steering column to slide the transmission into second gear with the three-speed column shifter, all brought me back to my youth.

“You know, Lisa,” Guilt reared its wimpy head. “This truck ended up being a lot more work than I ever imagined… bringing it home from Texas, the engine, all those new parts, repairing the eight-track, two trips to Toronto. Three body shops, for crying out loud!”

I was having a hard time ‘fessing up to myself, let alone my unsuspecting mate.

“When I add it all up, I probably could have bought a new truck,” I sheepishly admitted.

“Well, anyone can do that.” She laughed.

That conversation was ten years ago.

Although I’ve used the truck a few times and installed a four-barrel carb and headers, after 25 years of ownership, its time to sell it. Getting rid of it is sad, but I feel the old F100 should belong to someone who has the time to finish it. Someone with the dream and desire for it I once had.

Of course I have no idea what it is worth.

As long as it ends up with someone who will take care of it and appreciate a 55-year-old pickup truck that has lived a pretty good life, so far. 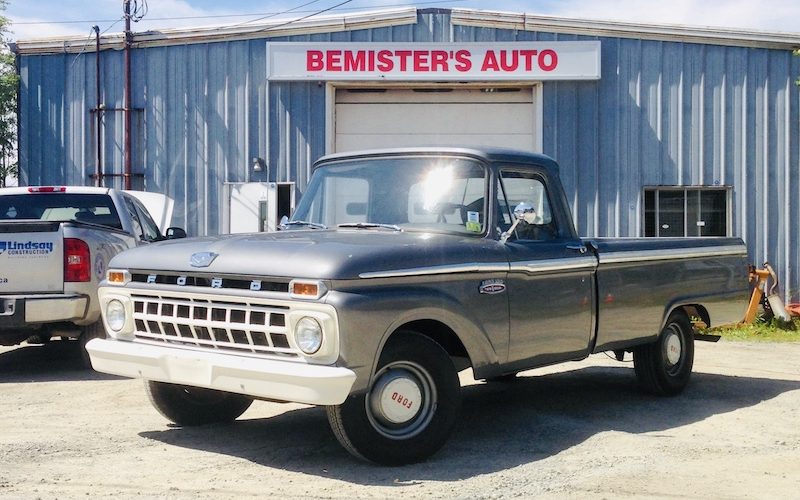