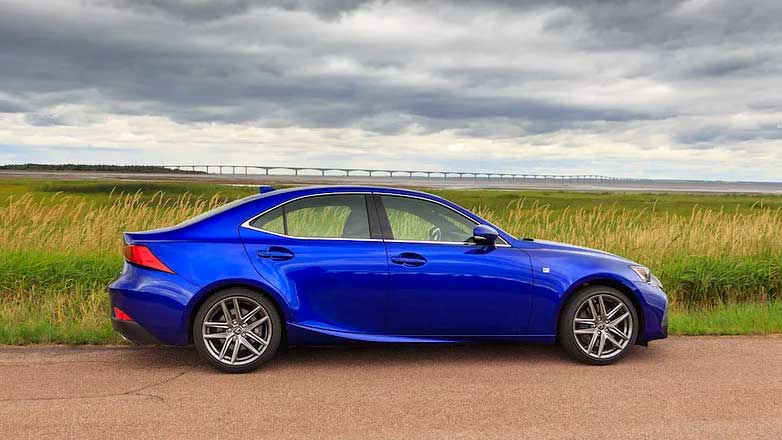 Three Provinces in 30 minutes: Only in Atlantic Canada

How quickly can you drive in three different provinces in this massive country? If you’re in Ontario, it could take you more than a day. From BC? Close to six hours. But if you’re in Nova Scotia or Prince Edward Island you could pull it off in as little as half an hour, making it by far the shortest distance between three provinces.

Things are smaller here in the Maritimes, even if it doesn’t always feel like it. Some distinct advantages come with that. Like being able to visit every Maritime province in the same time it takes for a pizza delivery. 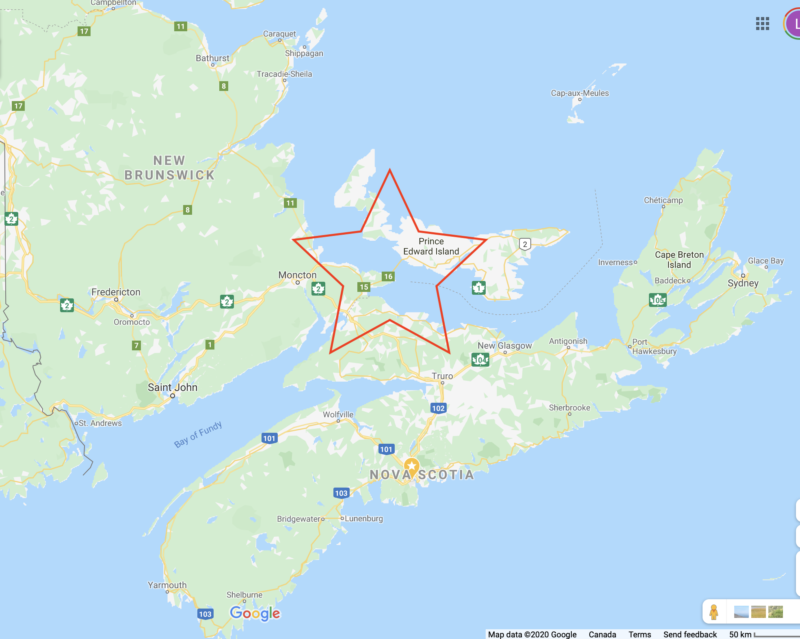 Like most Atlantic Canada drives, the trip from Borden to Tidnish Bridge is a beautiful one, and both ends lend themselves to longer drives. Even this condensed trip gives me the chance to take an East Coast Tester, in this case a Lexus IS 350 F-sport in a dazzling Ultrasonic Blue Mica, on the scenic route, adding a few minutes to the drive but expanding the view over the horizon of the Northumberland Strait.

I started on a pier near what used to be the parking lot for the Marine Atlantic ferries making the journey from Borden in PEI to Cape Tormentine in New Brunswick. Those ferries transported locals, vacationers, produce, and even train cars for more than a century before the opening of the 13-km long Confederation Bridge in 1997 that made this quick trip possible.

If you want to start your trip off of the island right, Borden-Carleton’s tourist plaza gives you endless opportunities to pick up Cows Ice Cream, a PEI Dirt Shirt, or one of countless other local souvenirs, but I figured I could open a Raspberry Cordial once I hit the bridge and have it stay cold until I arrived in Nova Scotia.

The fixed-link doesn’t give you the views and vintage arcade games that you found on the ferries, nor does it have the pervasive smell of diesel, hydraulic fluid, and exhaust that, to many Maritimers, was the scent that let you know you’re headed to a green and red paradise. Or leaving it, eagerly awaiting your return.

Confederation Bridge does give you some long views ahead when you go over the bridge’s hump, but I’m in a low-slung Lexus sports sedan which means I’m not seeing much more than sky to my left or right over the tall concrete barriers.

At the end of the bridge is the exit to the Cape Jourimain nature centre and trail, and if you’re not trying to set a record, it’s well worth a stop. I’m in a bit of a hurry so I skip it this time, and instead I take exit 47 to NB Route 955. 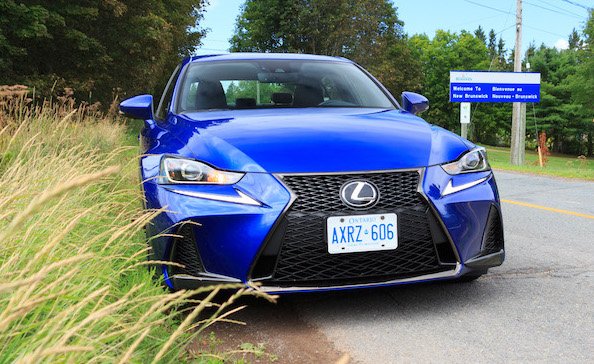 See, I know I can make this trip in 30 minutes, but Route 16 isn’t anyone’s version of exciting. So I take the long way (by 14 km) and end up at the other end of the old ferry route, where the large former parking lot is being taken over by a campground.

I’m now on route 960 and this is where it gets interesting. Instead of the arrow-straight line of RVs and buses that is Route 16, 960 hugs the coast, winding, twisting, and undulating from Cape Tormentine to just short of Port Elgin.

The pavement isn’t perfect, but this Lexus IS 350 F-sport has an adaptive suspension that soaks up bumps comfortably and keeps the car planted.

Though locals in their pickups are moving more quickly (and more dramatically) than I am, I’m not in that much of a hurry. I’ll use the paddle shifters to let the 3.5L V6 sing and shorten the time between curves while watching the ocean to my left which, on a sunny day, would be blue and welcoming but today is as dark and ominous as the styling of the IS 350 F-Sport. 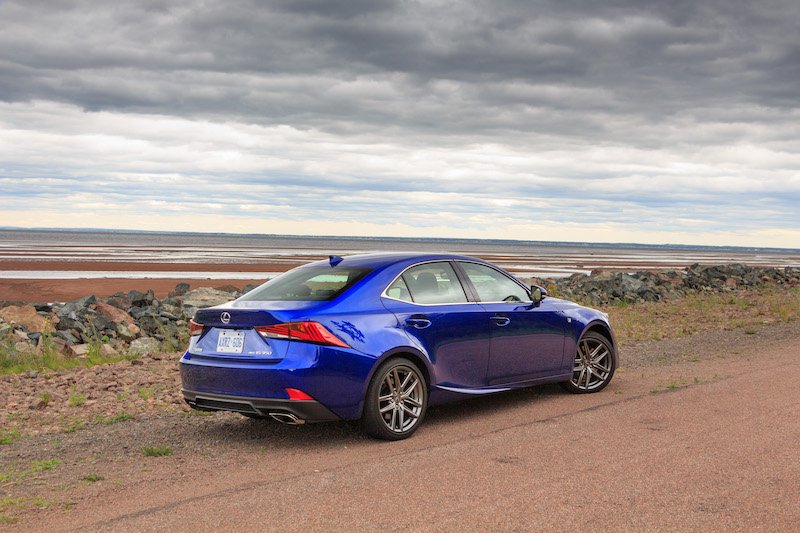 If you’ve got time, 960 has plenty of places to dip your toes into Baie Verte, and even have a quick beach picnic, but I finish the road and rejoin route 16 just before Port Elgin.

The exit to Main Street takes you into Port Elgin, which was founded as an Acadian settlement in 1690, but hasn’t actually had a port in decades. Then it’s onto Route 970 past some surprisingly good cafés and some more excellent roadway.

Pass one of New Brunswick’s only wineries (though that number is growing) and shortly after you hit both the end of the journey and one of the strangest bits of border in the country.

The end of the trip is the community of Tidnish Bridge, but it’s surprisingly not the bridge itself that marks the border. At least not in this particular spot. 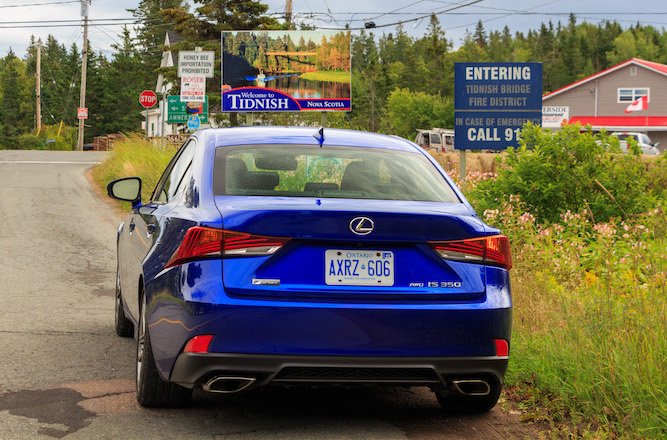 The NB/NS border starts where the Tidnish River meets Baie Verte and follows, roughly, the centerline of the river. But when it reaches the actual bridge, it, like many Maritimers over the years, takes a sharp turn and heads west, putting the crossing on a different road not too far away.

So you cross the border on the edge of town, well, what passes for town, at least. Just before a stop sign that marks the end of the road, you’ll see the sign welcoming you to Nova Scotia.

That’s it, in as little as half an hour, you’ve visited all three Maritime provinces.

The drive is far from over, of course, because you’re not exactly close to anywhere. But you are close to more of the Northumberland Shore’s amazing roadways, small villages, and fresh ocean air. Enjoy. What’s the hurry?