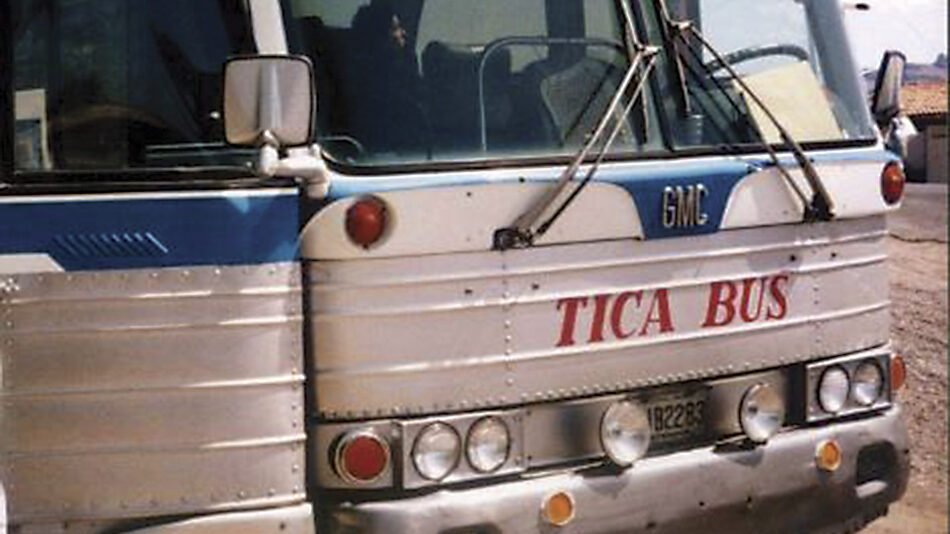 My girlfriend at the time, Solange Fortin, and I had just spent a few days in Panama City, Panama. After five months tooling around South America’s gringo trail, the bright lights and cosmopolitan atmosphere of the city were a welcome change of pace. But on the cab ride to the airport to catch a flight to Miami, the idea surfaced.

“How about hitchhiking?” I asked. 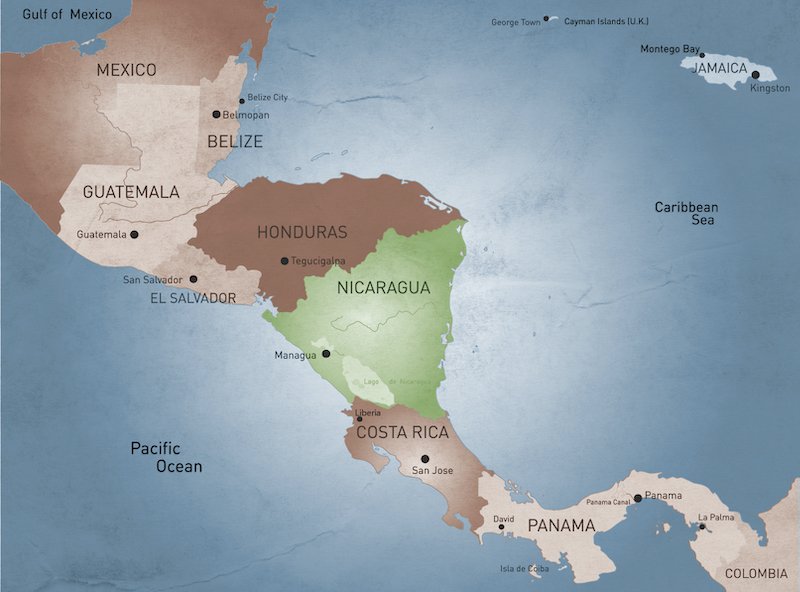 Solange nodded and, in Spanish, directed the cabby to drop us at the end of Thatcher Ferry Bridge on the west side of the Panama Canal.

From there, we would hitchhike along the Interamerican Highway to the Costa Rican border, 500 kilometres away.

I knew roads continued up to Mexico but was foggy on what countries were involved, how long it would take and en route political situations. Transit visas and paperwork would be sorted out on the fly as our trek through Central America unfolded.

We got a drive almost immediately with a chain-link fence salesman headed to Aguadulce, a port town three hours up the line. The bustle of Panama City evaporated into sweeping savannas speckled with clumps of fluorescent green mango trees and stately palm groves.

Waiting for the next drive, Solange read from the South American Handbook: “There’s a safety valve. An express bus service called Tica runs between Central American capital cities on a daily basis.”

Although caving in to the Tica Bus wasn’t high on my priorities, I was relieved about a daily mobility option.

Two hours later, the silent solitude of stranded hitchhikers was pierced by the high-pitched whine of a flat-out engine. A speeding bus roared past, blowing the hat I got in Puno, Peru into the middle of the Interamerican Highway. As the behemoth faded into nothingness, two words emblazoned across the front of the speeding people-mover finally registered… TICA BUS. 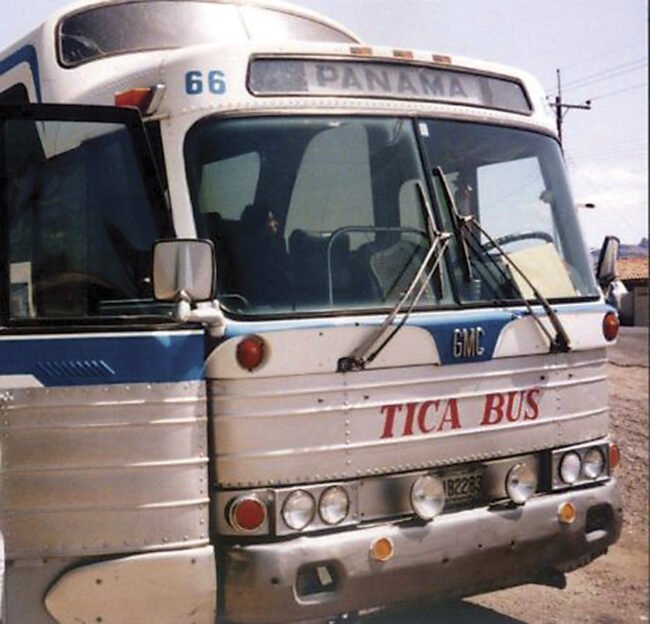 “Well that’s it for today!” I laughed, chasing the Puno hat across the road. Solange showed no emotion.

We made it to David, capital of Chiriqui Province, and holed up in a tidy wooden hotel where, for a swinging night, we stretched out on hammocks haphazardly strung throughout the lobby and courtyard.

In the morning it was back to the Interamerican Highway. Drivers waved and honked horns.

Another Tica Bus screamed past us as Solange’s mood deteriorated. The gloss of hitchhiking through Central America was wearing thin. 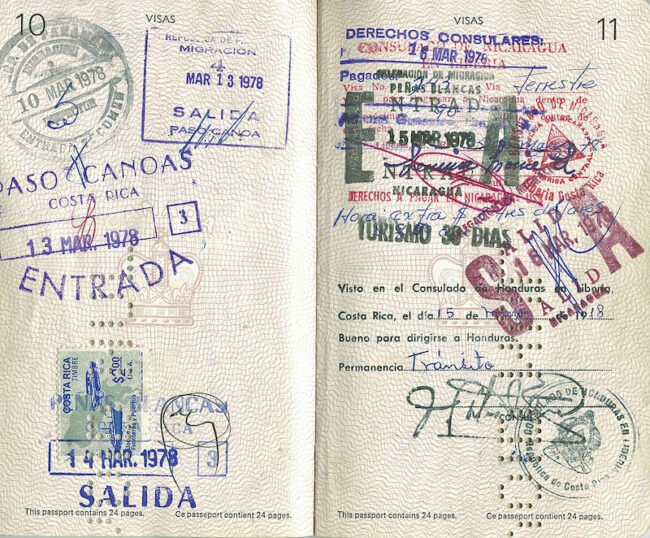 I was anticipating a rupture when I heard the hissing airbrakes of a grubby White Freightliner 18-wheeler.

Once inside the hot cab-over, Pedro, an energetic Guatemalan man in his early 20s, told me he was on his way to San Salvador, the capital of El Salvador. That meant one drive all the way through Costa Rica, Nicaragua and Honduras.

It would take three days so we settled in, Solange by the passenger’s window gasping for air while I sat on top of the engine compartment. Pedro offered me the sleeper at the back of the cab, but after looking, I stayed put, and kept an eye on my Puno hat and the shapely Solange.

After a six-hour delay at the Costa Rican border, we motored north toward Nicaragua. Pedro told us about The Sandinistas’ National Patriotic Front threatening President Somoza’s longstanding grip on power in Nicaragua country.

Clearing out of Costa Rica was straightforward. Pedro was uncharacteristically quiet driving through a two-mile stretch of no-man’s-land to the Nicaraguan border post. 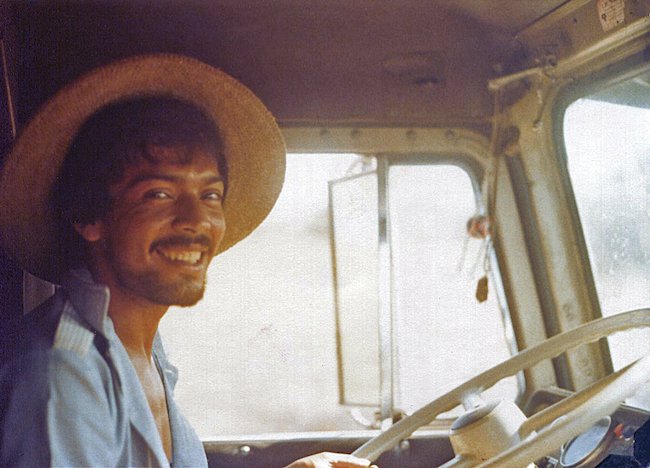 Solange and I climbed down from the road-weary Freightliner and were led to a small dilapidated shack behind the main control post. An official took our passports, returning them a few minutes later with an order to get our bags from the truck. Pedro threw them down before driving off, my Puno hat on his head.

Back at the shack, the situation deteriorated as three soldiers fingered weapons. Our 18-wheeled ticket was headed north with the Puno hat. The post was closing in ten minutes and our lack of transit visas was causing a stir among the border officials.

Shortly, another uniformed official entered the room. Guards shuffled to attention. The highly-adorned shoulder epaulets on his uniform confirmed suspicions Head Honcho had arrived. He was obnoxious, obviously drunk. 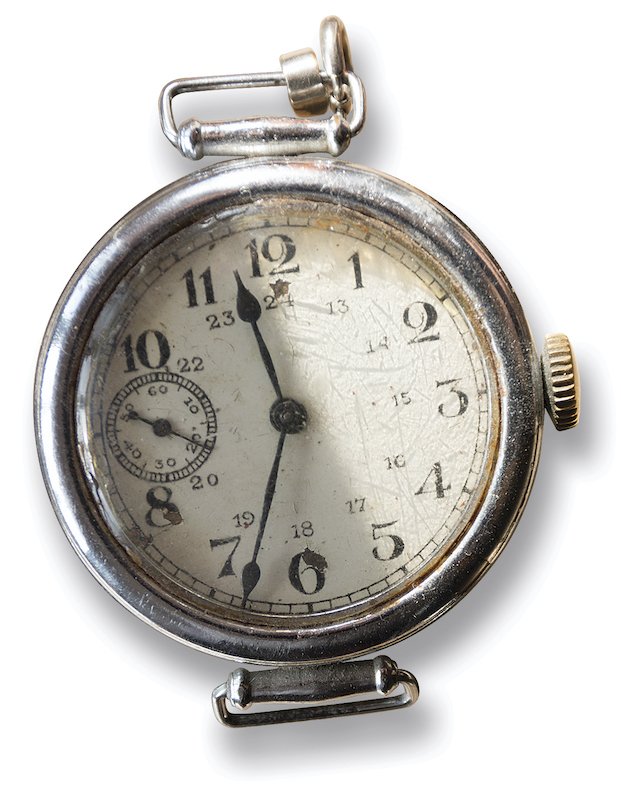 Without saying a word, the Captain removed his watch, casually dropping it into my shirt pocket. The bottom of his necktie had been dipped into something red, tomato soup perhaps, and the dried-up flakes nauseated me. He laughed to himself, sitting down at a gritty desk strewn with tattered papers.

The situation spiraled from bad to ugly as two guards pointed their rifles at us. I had the boss’s watch in my shirt pocket and he was having a drunken yuck over it.

Solange’s fiery temper fueled an eloquent scolding. I didn’t understand the words of her Spanish tirade but laughing ceased. Rifles were lowered and the border bullies clammed up. I handed the watch back to Head Honcho who motioned his henchmen to escort us back to the Costa Rican frontier.

We would have to travel south to the Costa Rican town of Liberia where the pesky transit visas could be scored. The border was closed by then but we managed seats on a bus packed with Panama-bound Nicaraguans that took us south to the town where we could visas in the morning.

In Liberia, we spent the night beside the Interamerican Highway in a disgusting motel room. The kind of place where you spend your whole visit wanting to leave. Suffocating heat and traffic that kept me awake until 3:00 am. 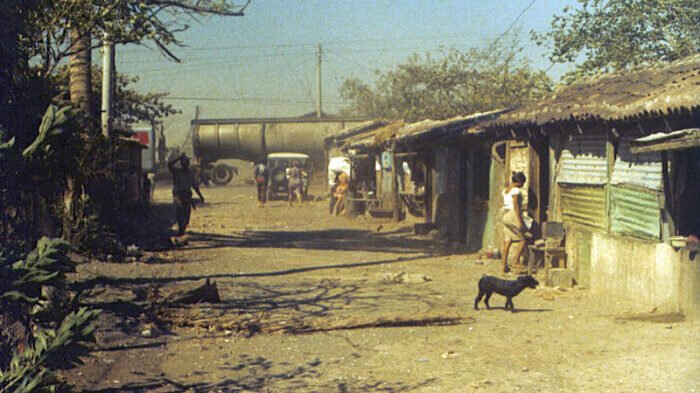 A loud truck woke me at sunrise. The whine of its engine sounded different from the others. The Tica Bus!

“That’s it for today,” I laughed to myself, as the sound peaked than grew faint.