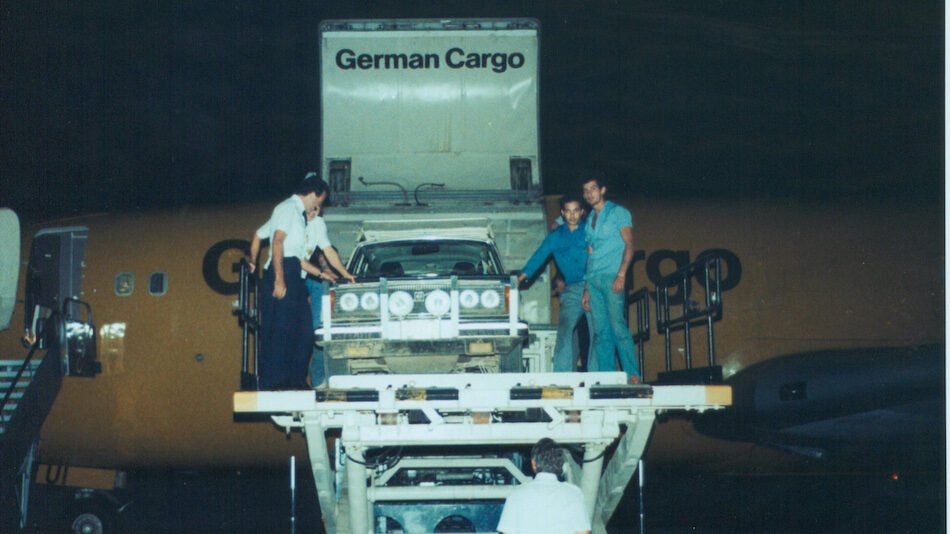 The accommodation wasn’t much, a strip of rooms with a dusty, potholed parking lot handy the airport. There were no screens on the windows and the stained interior walls were in dire need of paint. The bathroom reeked. It was the sort of hotel room you’re happy to share with someone to help keep an eye out for whatever might creep or slither on by.

Between the stifling heat and noisy aircraft, I didn’t get much sleep. Neither did Ken Langley, my partner on our attempt to break the around-the-world driving record back in 1980.

After a hot and humid 12-day drive across India and Pakistan we were filthy, bug-bitten, exhausted and sick with dysentery. We were also keen to get airlifted out of Pakistan and, with the Karachi airport in sight, we could smell our escape. 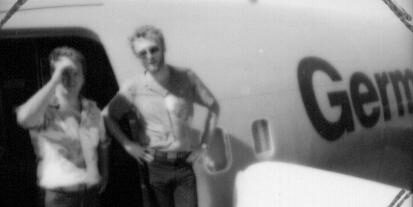 The original objective had been to drive east out of Pakistan to Afghanistan through the Khyber Pass then cross Iran and Turkey into Europe. But during the transit of India, war had broken out between Iran and Iraq, washing out that plan. With the then-Soviet Union out of the question, the only option was to find an airlift over the war. We’d make up the lost driving sectors by doing a northern loop into the Scandinavian Arctic.

Through our office back home, we convinced Lufthansa Airlines to re-route a carpet-laden cargo plane into Karachi, Pakistan to pick us up. They would fly us and ‘Red Cloud’ to Athens, Greece circumventing the war.

After a night of cat naps, we drove to the Karachi cargo terminal and started the paperwork to let our Nova Scotia-plated car and us fly off to Greece. Since Ken and I would be traveling on an aircraft configured strictly for freight, additional documentation was required for us to exit Pakistan as ‘special couriers’.

The fee for flying our Nova Scotia-plated 1980 Volvo and us over the Iran-Iraq war, $18,000, was charged onto my already-warped American Express card.

The ‘what-ifs’ disappeared about noon when the bright orange Boeing 707 taxied up to the hanger. I felt like our mothers were coming to make the nausea go away and airlift us to a playground closer to home. The German pilots, in a hurry to get back to Frankfurt for happy hour, looked remarkably tidy in the shabby cargo office.

“How vill you be paying for zis?” the Captain, a burly man with a handlebar mustache, asked.

I fumbled for my wallet and pulled out my American Express card.

“Aaah, zat will be fine,” he offered, then asked the office manager to charge $18,000 U.S. onto my already-warped card.

For the next hour, we watched the car being loaded onto the aircraft. 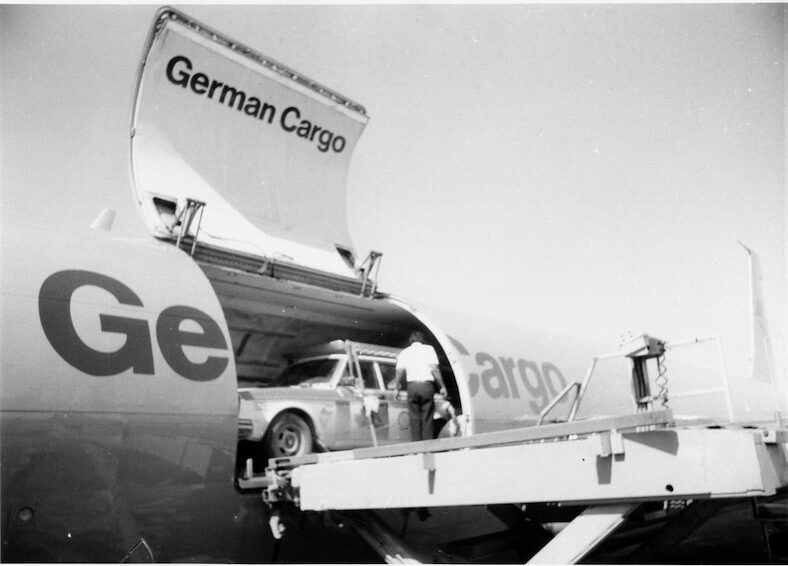 The Captain briefed us on emergency procedures in case something went haywire during the flight. Since one of our two ‘courier’ seats was beside the entry door, he paid particular attention to the door’s operation.

Once inside it became obvious how cramped the flight would be. Red Cloud was strapped down in front of the carpets leaving little room between its grill and the back of the cockpit door. In our wobbly, dehydrated state, it seemed an edgy place in which to fly over a war.

On the horizon, smoke from the Abadan oil refinery, attacked by Iraq a few days earlier, drifted into the stratosphere.

Ken took the seat by the entry door hoping for some sleep. I strapped into the seat at the back of the cockpit with a sprawling view out the windscreen between the pilot and co-pilot. With headphones  I could hear what was going on between the crew and the tower.

“Is hot and veer heavy, veel need every inch vee can get,” the Captain casually remarked after being cleared for take-off. 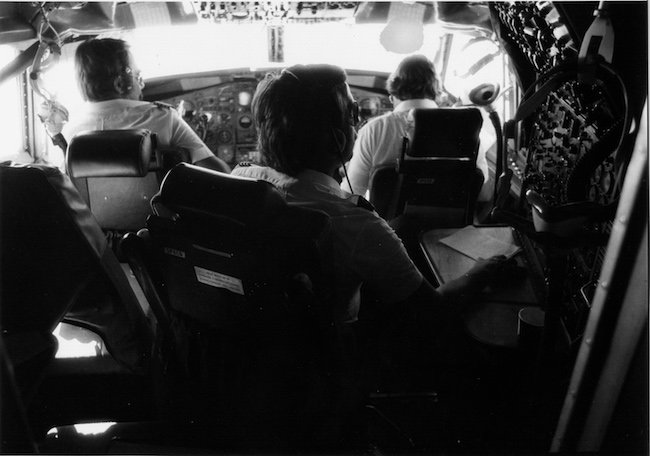 On the climb out Karachi faded into the haze as endless stretch of the Arabian Sea pounded its shoreline. We leveled off at 38,000 feet and flew along the south coast of Iran. On the horizon smoke from the Abadan oil refinery, that had been attacked a few days earlier, drifted into the stratosphere.

I was preoccupied with the view, the chatter from our Abu Dhabi-based air traffic controllers and the operation of the Boeing 707 aircraft when Ken tapped me on the shoulder looking pale, scared.

“You gotta club me, Sowerby, put me out for while. I’m really shaky and it’s getting claustrophobic back there.” Sweat was pouring off his forehead into his eyes.

“I’ve got this fascination with the door.” He looked crazed.

“Can’t get my mind off of it. Whenever I close my eyes all I hear is that song Don’t Fence Me In sounding like it’s coming from a cheap megaphone. If I look out the window all my relatives are marching around to the beat of it.”

This didn’t sound good at all. Ken was obviously in a state and I wasn’t keen to leave him alone back there with the door.

I could faintly make out the mountains of Lebanon. Surely, once we reached those mountains, all would be well with our dream to drive into the record books.

I thought about telling the Captain but figured news of my delirious partner’s fascination with the door wouldn’t be impressive.

“Er, excuse me, Captain. Do you have a monkey wrench so I can club Ken to curb his fascination with that door you showed us how to use?”

On the horizon I could faintly make out the mountains of Lebanon. We were following pipelines stretching for hundreds of kilometres across the deserts of Saudi Arabia. Once we reached those mountains surely all would be well with our dream to drive into the record books.

But what about Kenny? I went back to the cargo area, fished a rope out of the Volvo and tied him to his seat, cowboy style.

He was cooperative, but we had to get through a few bouts of the giddies in the process. I covered him up with a blanket so the pilots wouldn’t see the rope, then watched him drift off to sleep.

Back in the cockpit, I hoped the knots would hold. We were over Lebanon about to head across the Mediterranean Sea. We were through the difficult part of our attempt to drive around the world in 77 days or less and hopefully now, our health would improve.

When we landed and pulled up to the hangar in Athens, maybe Ken could convince the Captain to let him open the door.