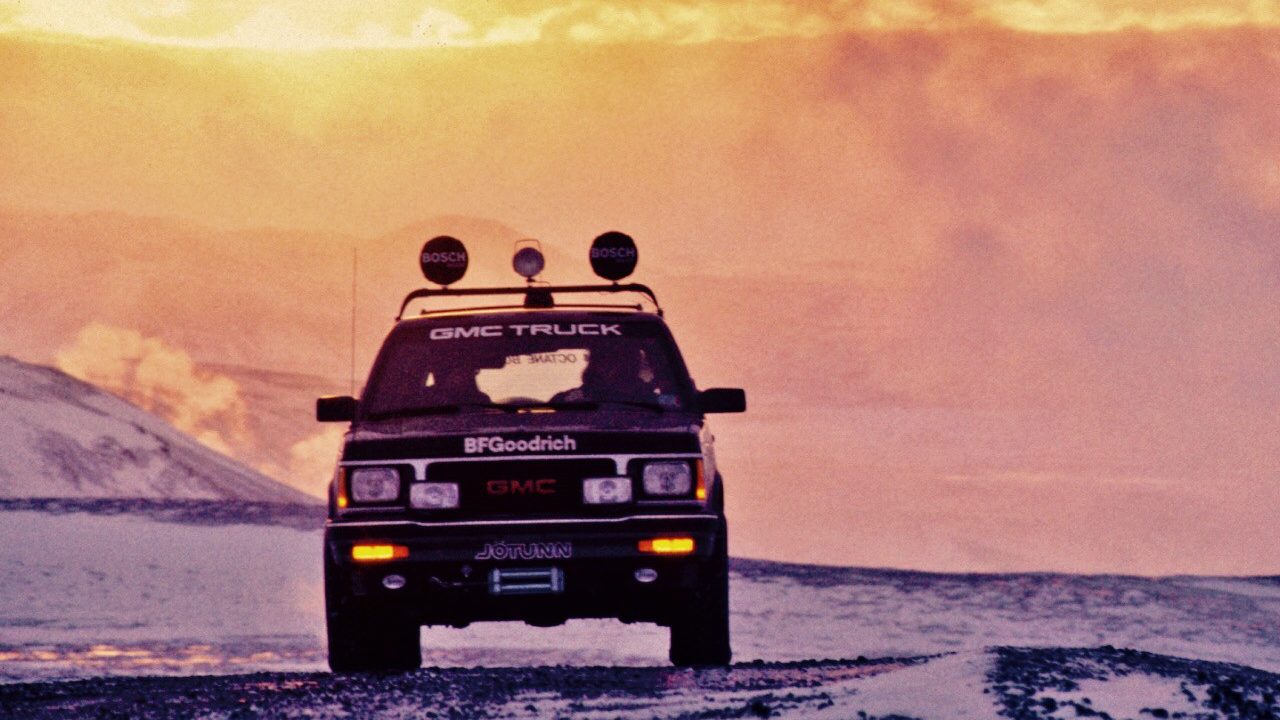 Testers Abroad: One Lap of Iceland

The polite concierge at the stylish Hotel Borg warned me: “Thursday night in Reykjavik is ladies’ night out.”

This certainly didn’t seem the case as I dug into a plate of fresh seafood at a trendy restaurant across the street. I was the only diner. Savouring every bite, this dinner was plenty more palatable than the boiled sheep head I had picked at the night before.

By the time desert came, I counted 36 women sitting at the bar and tables around mine. Beautiful, fit and having fun, they scared the daylights out of me. After all, I was on a fact-finding mission and, with a slew of meetings the next morning, the last thing this gent needed was a late night of temptation and debauchery.

It was November 20th, 1990 and our 1991 GMC Jimmy was out on the high seas strapped to the deck of a commercial fishing boat on the way to the isolated island nation that straddles the Arctic Circle in the North Atlantic halfway between Moscow and New York.

My mission was to figure out how to drive the perimeter of the Land of Fire and Ice during the darkest, most miserable time of Iceland’s winter.

The idea had surfaced a few weeks earlier when Montana-based writer Tim Cahill telephoned in a state of acute aggravation.

Tim had just completed a book recounting the antics of our record-breaking drive from the southernmost tip of South America to the top of the North America in the very first production 1988 GMC Sierra 3500 Diesel pick-up truck. Although his manuscript had taken a few years to complete, the publisher, Random House, was finally preparing to launch the book.

“I can’t believe what they’ve done!” Tim was livid. “They’re forcing me to call it Road Fever.”

“That’s not so bad,” I offered, thinking at least the book was finished. 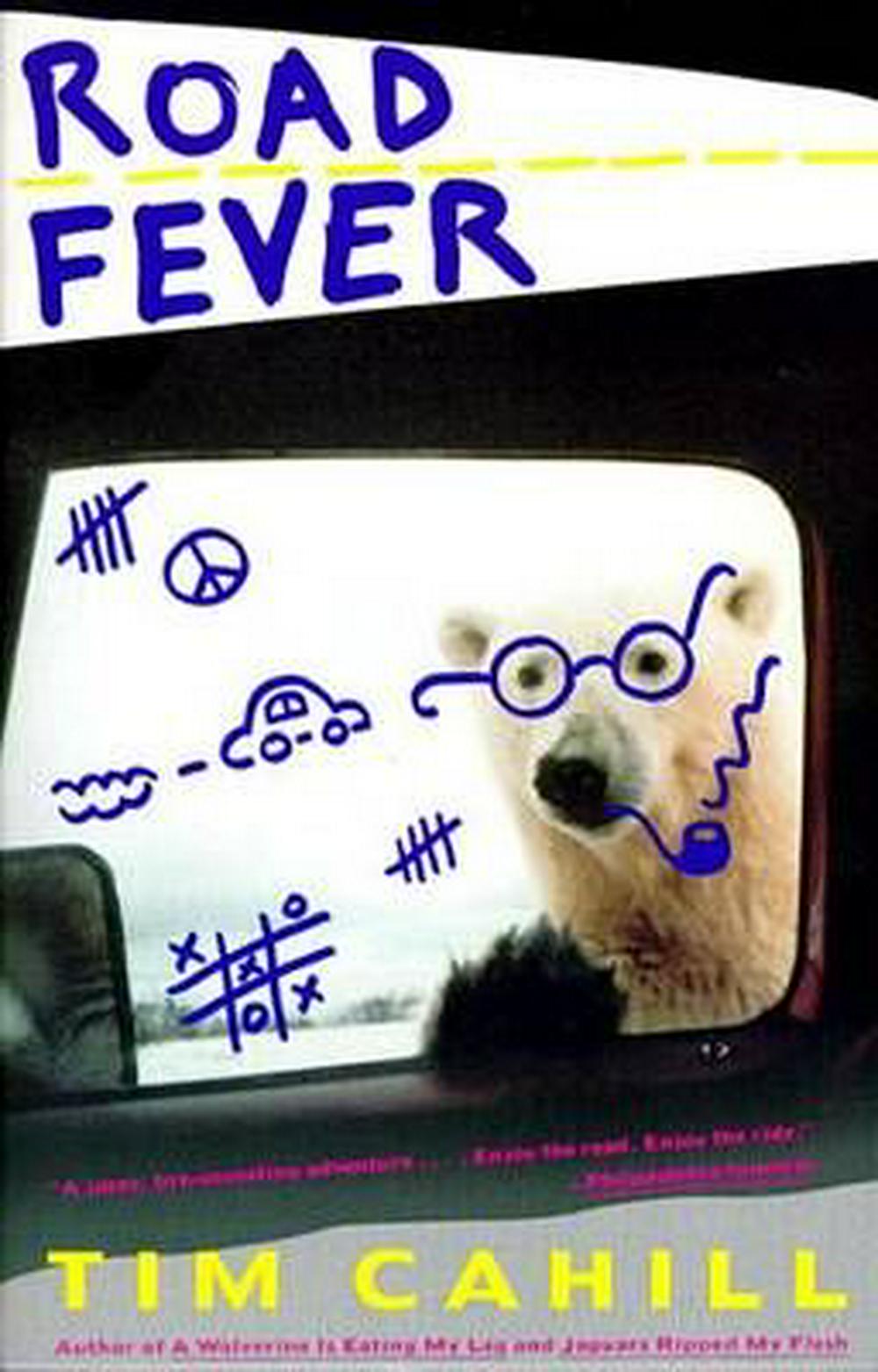 “No, that won’t do! The whole time I was writing it, it was El Road, you know – The Road,” Tim was ranting and I suspected he might have had an alcoholic beverage to drown his sorrow.

‘Here’s what we’ll do, Tim.” My mind raced as I scanned a map of the world.

“Let’s drive my Jimmy around the perimeter of Iceland next month. It will be dark and cold with the possibility of wretched weather!”

These seemed the proper ingredients to chill out Tim’s Road Fever.

The next morning two targeted telephone calls surprisingly pulled the financing together. Then I called Los Angeles-based photojournalist Rik Paul who immediately signed on. Two weeks later, here I was, in the Icelandic capital making arrangements and friends while steering clear of Reykjavik’s saucy ‘ladies’ night out’. 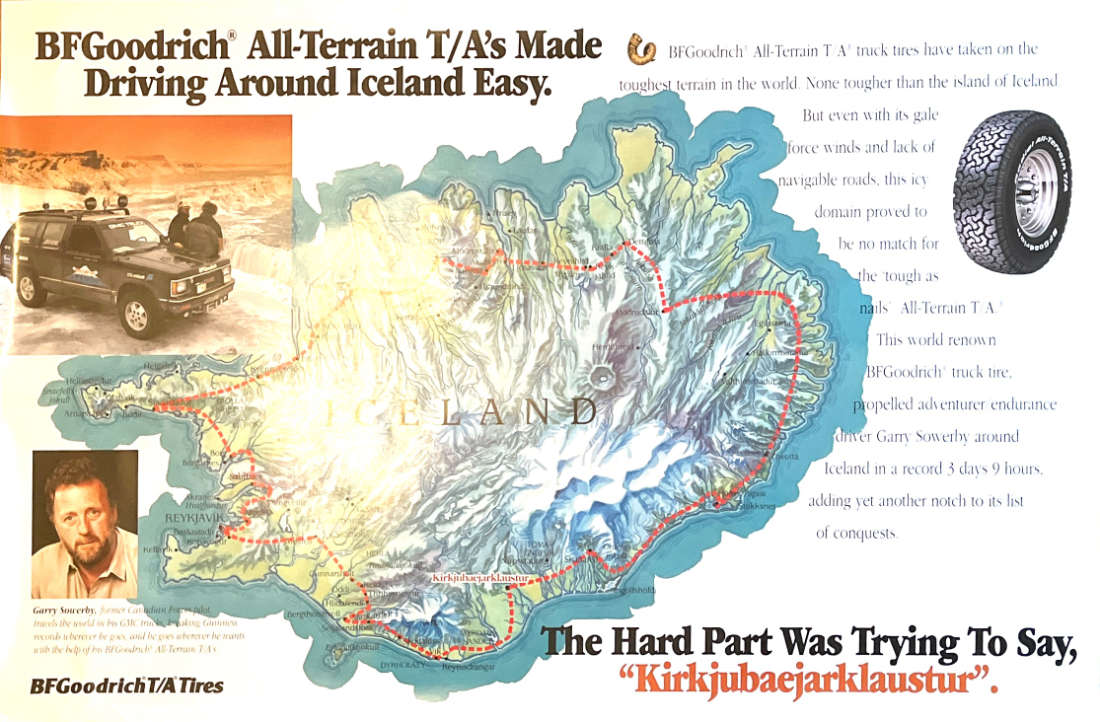 The six-month-old four-door 1991 GMC Jimmy had already taken on a seven-day drive through seven former Eastern Bloc countries, a drive we coined ‘Around The Bloc in a Week’.

Before shipping the Jimmy to Iceland, we installed a set of studded BF Goodrich All-Terrain T/A tires and a roof bar with two Big Oscar Bosch driving lights that could light up a Yankee Stadium. The only other accessory was a nifty Ramsey winch in case a little more traction was required as we drove, winched and dug our way through 2,500 kilometres of desolation along Iceland’s lonely perimeter road.

Eventually we came through the ordeal unscathed thanks to blessings of the weather gods, no fatal mistakes or miscalculations and the seemingly invincible, go-anywhere abilities of the little Jimmy.

The three-day, nine-hour and 33-minute circumnavigation was packed with excitement as we breakfasted on boiled lumps of various mutton appendages, mingled with herds of roaming Icelandic horses and watched Horsehead seals frolic in emerald glacial lagoons.

Iceland was like a surreal Disney project, rampant with steaming geysers, stunning waterfalls and looming glaciers.

Even though it was dark much of the time, Tim, Rik and I found ourselves cruising through lingering twilights, among silhouetted towering volcanic cones and eerie lava beds.

We learned it was easier to give towns and villages rudimentary nicknames. Seydisfjordur became the ‘S-town’, Saudarkrokur the ‘Other S-town’ and, of course, Valthjofsstadur, the ‘V-town’.

Black balls, Black Death and lessons on how to pronounce Kirkjubaejarklaustur

In Akureyri (the ‘A-town’), we teed off with black balls at the Arctic Open Golf Course and when the trek was over made merry back in Reykjavik over a bottle of Icelandic schnapps, Brennivín, affectionately known as ‘Black Death’, and a concoction of five liqueurs called a ‘Brain’.

Even though its global wanderings are now limited to summer errands and the odd trip to the beach, I still own the venerable GMC Jimmy.

Sometimes when I look at it, with the barely-used Ramsey winch and those Big Oscars, I recall how the unassuming little SUV helped Tim Cahill cool out his frustration over being forced by the marketing gurus at Random House Publishing to change the name of his book El Road to Road Fever.

When I think of the trip, all those years ago, I realize the hardest part about driving around Iceland in the dead of winter might have been trying to pronounce the name of that ‘K-town’ ….  Kirkjubaejarklaustur.