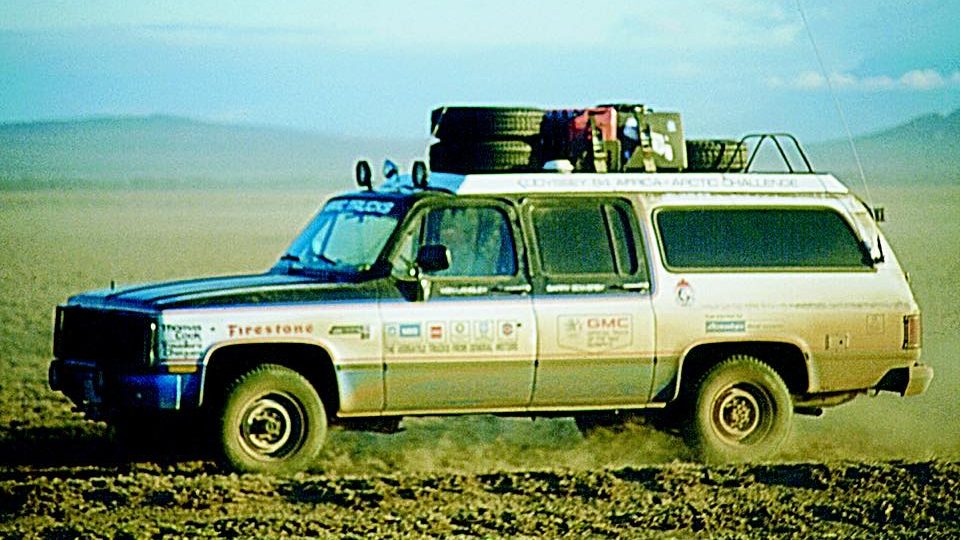 Testers Abroad: Driving through the black clouds of war in Iraq

In 1984, Kuwait was the wealthiest country in the world per capita. Its port was the most efficient on the Persian Gulf, on the go with tankers shipping out oil and freighters bringing goods into the hot Arabian market.

Everyone had a job on this patch of sand.

A war between Iran and Iraq was a big problem, however. Iraq borders Kuwait and Iran’s invasion of Iraq was taking place near the Kuwait border, 100 kilometres north of its capital, Kuwait City. 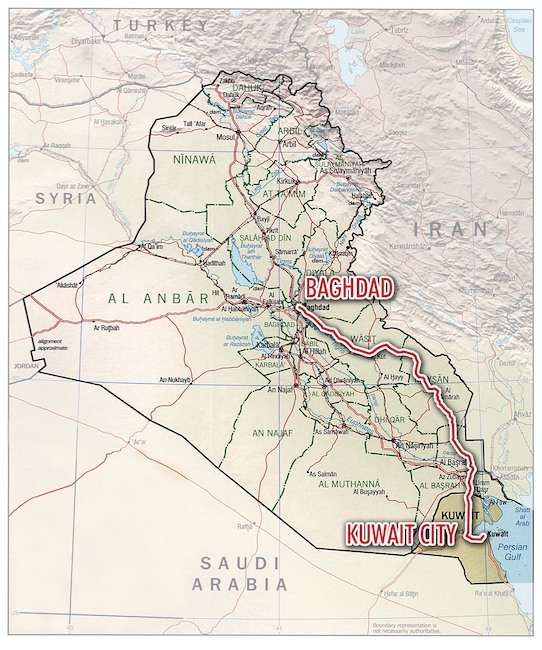 The black clouds of war could sometimes be seen looming on the horizon.

We had napped, but not slept in 64 hours as we approached Kuwait City from the south in March of that year. Well into our attempt to set a new Guinness land-speed record between the south tip of Africa and the north cape of Europe at Nordkap, Norway, we were optimistic but nervous.

A sandstorm in Saudi Arabia through which Ken Langley and I had pushed our 1984 GMC Suburban diesel truck had slowed us down, but we thought another in war-torn southern Iraq would give us cover.

Iranian terrorists had recently bombed the American embassy across the street from our hotel, the Hilton Kuwait City. The executions of the Iranian perpetrators had been delayed, but there was fear of attack by groups sympathetic to Iran.

Leaving Kuwait City for the 575-kilometre drive to Baghdad, Iraq the next morning, I surveyed the surrounding terrain. Industrial Kuwait was sprawling. Oil rigs on the horizon shimmered in the desert heat like a drug-induced hallucination. 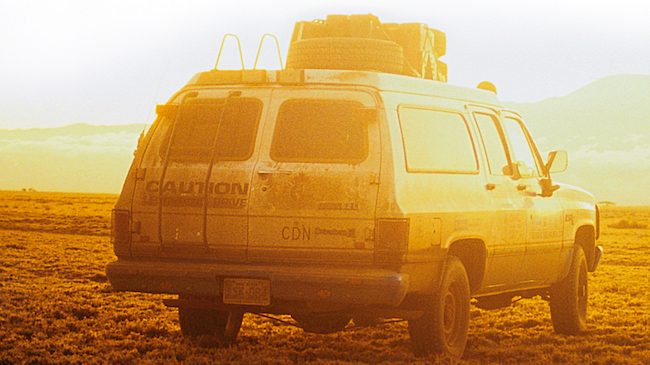 We drove the main road through Kuwait, waiting for Iranian jets to strafe our vehicle

An item Ken read in the Kuwait Times newspaper at breakfast was running through his mind: “The Iranian buildup on the Majnoon Islands indicates their next move will be to sever road connections between Basra, the Iraqi port on the Persian Gulf, and Baghdad, the capital.”

It was the road we were headed for, a main target of the Iranian offensive that had been predicted all spring but had still not taken place.

Traffic fell off as we approached the border and, for the last 40 kilometres, we had the highway to ourselves. Black smoke was blowing in from the direction of Basra. Its refineries were being shelled by Iranian artillery dug in only ten miles from the city.

Clearing out of Kuwait went smoothly.

Welcome to Iraq. Danger ahead.

The road through no-man’s-land to the Iraq line was littered with burned-out hulks of transport trucks, pick-ups and cars. At the frontier, we were greeted by a huge Welcome to Iraq billboard, followed by a Danger Ahead sign.

There were a dozen lanes at the border post, six going in and six coming out, and off to the side were customs and immigration offices. Arabic pop music blasted from loudspeakers.

We handed our passports to the immigration officer, then sat down with a dozen truck drivers whose dour looks spelled delay. But five minutes later we were through immigration and directed down the hall to Customs where a friendly woman with a beehive hairdo and the brightest red lipstick quickly did the paper work then sent us down another hall to pay a $25 ‘war insurance fee’ for the truck.

The post was closing at 4:00, just ten minutes away, when we were ushered into the Office of the Director of Customs. He was wearing pale blue pants and a shiny print shirt, the standard dress of the border post, complemented by the dark glasses that in themselves were like a uniform in the region.

“It’s too late,” the Director advised. “You’re going to have to stay here for the night.”

“We’re anxious to get going, ” I showed him news stories from Kuwait about our Africa-Arctic quest then offered to show him our truck. 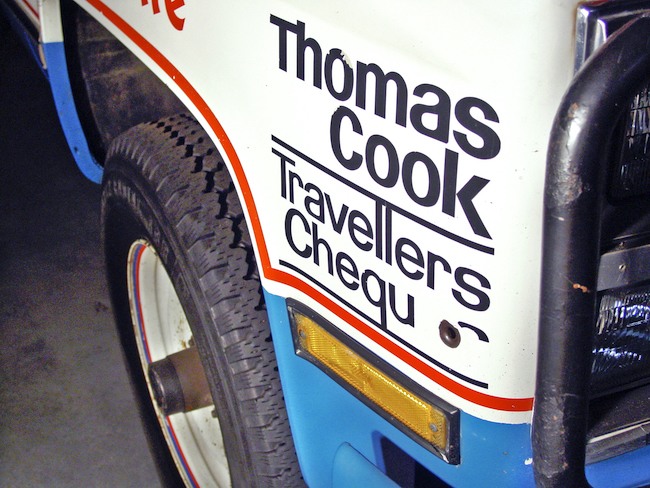 When I pointed out the nine bullet holes from an ambush in northern Kenya, he told us to get going since it was at least a six-hour drive to Baghdad.

Heading north, our euphoria was short-lived. There were signs of war everywhere as we approached Basra. We passed a fertilizer factory with missile holes through its storage tanks. There were sandbag defences, all manned, around the oil refineries and very little civilian traffic.

Carcasses of burned-out tanks and armored personnel carriers littered the shoulders of the two-lane highway. Columns of smoke rose on the horizon to the north, but in the midst of all this, the fields were filled with men, women and children harvesting tomatoes. They were smiling, as if war was a million miles away.

Ken drove while I scanned the eastern sky with binoculars, looking for Iranian fighter planes. We had been told the Iranians sometimes strafed the highway in the evening. If we came under attack, we were to jump out of the truck and hit the ditch, because the jets would go for the truck.

There were no attacks as we skirted Basra and we were soon on the heavily rutted asphalt road to Baghdad, moving away from the danger zone. 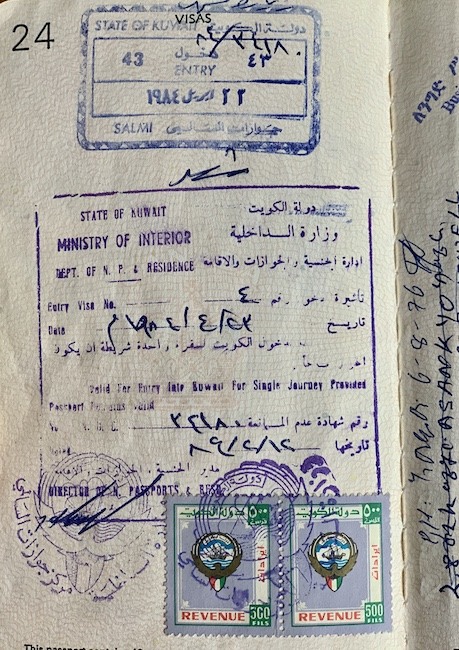 Later, a police car led us through a military marshalling area where soldiers cheered, realizing from the sponsor decals on the Suburban that we were in some kind of race.

There were thousands of soldiers there.

Some, obviously returning from the front, wore torn uniforms with bandages over where limbs had been amputated or blown off. Others wore fresh uniforms and spit-polished boots, preparing to go south to the battle.

It was obvious from the facial expressions of the parents, wives and children gathered who was saying hello and who was bidding farewell to loved ones.

We rolled into Baghdad shortly after midnight, exhausted but relieved. I asked a cab driver for directions to the Mansour Melia Hotel but the route sounded impossibly complicated, despite the roads we had just driven and the things we had seen.

Neither of us had been in Baghdad before so Ken got into the taxi and I followed as the driver led me across the Tigris River to the hotel. Somehow I felt safe following a randomly chosen taxicab through the streets of Baghdad.

The sights, sounds and severity of the day might have been expected, considering we were driving through a war zone. But the fleeting glimpse of the rawness and ragged reality of war has stayed with me.