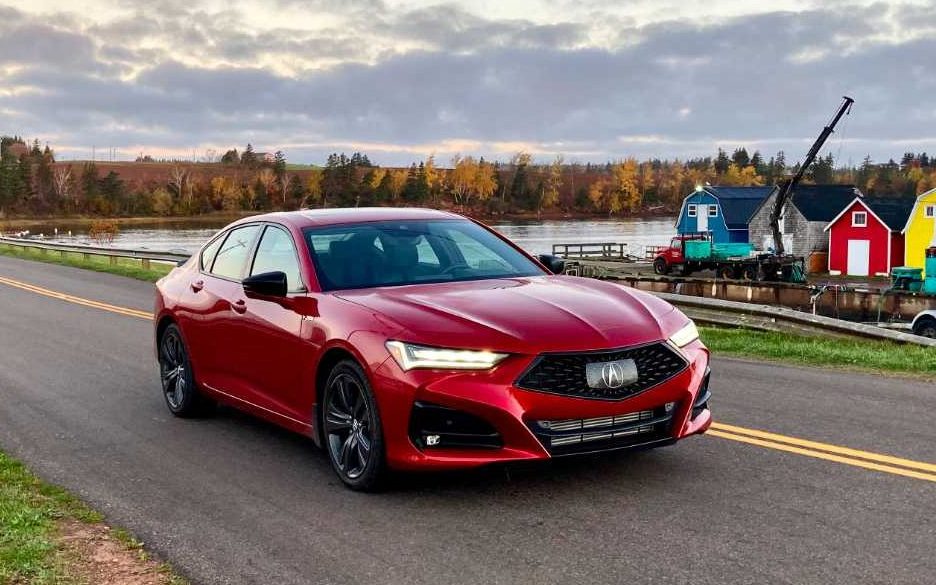 Call it a midlife crisis, call it a response to a lifelong dream, call it a self-prescribed mental health treatment. Whatever you call it, I take it seriously.

On a Saturday morning, wake up before every other member of the family – before the sun, too – and head out on a motorcycle to catch the sunrise on the north shore of Prince Edward Island.

Or, when the season calls for it, choose a car instead.

No caffeine required: A pre-sunrise jaunt on one of PEI’s greatest roads in a 2021 Acura TLX

The day before Hallowe’en, at 6:26 AM and with the temperature hovering just above freezing, a 2021 Acura TLX A-Spec joined me for a 47-kilometre blast around one of PEI’s greatest roads.

Route 20 follows the north shore from Kensington to New London in areas traditionally known as Lot 18 and Lot 20. Malpeque Bay rests calmly to the west, the Gulf of St. Lawrence more boisterously churns to the north, and the typical tourist attractions of Cavendish are not far to the east.

There are better known roads on the Island. The Gulf Shore Parkway is never a letdown. Route 19 between Rocky Point and DeSable offers a uniquely south shore perspective. Evangeline’s Route 11 has Bottle Houses and Beach Goats.

But Route 20 is the real deal and, if driving only for the sake of driving, it’s deserving of a properly capable car.

While the Acura’s first-generation TLX failed to raise your pulse, Acura’s latest TLX – particularly in A-Spec form – is poised for enthusiastic driving on a stretch of asphalt abandoned weeks ago by tourists and unoccupied by Islanders for another hour or so.

Common to, well, everywhere, PEI’s best views are enjoyed in the daylight.

Many of Route 20’s best views require a brief foray down a dirt road, but there’s no shortage of vistas you can enjoy from the front seat of the TLX. Heading west-to-east, you’ll crest a hill in Park Corner and the Lake of Shining Waters sprawls out in front of you with the Anne of Green Gables Museum on your right and the Gulf’s shoreline dunes on the left.

Headed in the opposite direction, the climb from Springbrook to the hill overlooking French River ends with a gravel parking area for a lookoff that showcases Cavendish’s sandspit, French River’s fisheries, and Yankee Hill.

But any adventure down Route 20 deserves a few detours.

On the one hand, Cape Road leads to Cape Tryon Road, where a lighthouse overlooks some of PEI’s most dramatic cliffs or, on the other, to the New London Range Rear Lighthouse.

Malpeque’s King Street will lead you toward world-class kiteboarding at Princetown Point on the Malpeque Bay. The views of New London Bay as you make your way down Paynter Road are worth it, as well.

While not necessarily true in October, tourists flock to Prince Edward Island for the beaches. Brackley and Basin Head, Cavendish and Cedar Dunes, Greenwich and Panmure Island – they all deserve an afternoon.

Route 20’s once quiet stretches of sand, however, are beginning to garner their own fan clubs due in large part to the attention paid to Thunder Cove in Lower Darnley. Thunder Cove is just one end of a stretch of sand that reaches from Twin Shores to Cousins Shore, with Branders Pond and Adams Beach in between.

For that, you’ll want the provincial park at Cabot Beach. Don’t expect freshly laid tarmac either. We ventured down to Branders Pond as the sun began to breach in October, but December will tell a different story. Most of Route 20’s offshoots won’t be plowed all winter, and they’ll be thick with muck well into the spring.

At the other end of Route 20 in New London, Sou’West offers one of PEI’s best patio views. There’s pizza at O’NEiLs in French River, classic Island fare at Ship to Shore in Darnley, and Malpeque oysters in – where else? – Malpeque at the Oyster Barn on the wharf.

PEI’s best roads must offer all of these elements: views, beaches, and food.

But a great driver’s road needs more than great destinations. Route 20 will be traversed all summer long by trailer-towing three-row crossovers and lumbering RVs, throughout fall by potato trucks and windrowers, and by plows of all kinds in the winter. Route 20 deserves better.

Sure, it’s bulkier and more premium-oriented than the Integra ever was, but the TLX A-Spec’s sporting intentions are obvious. The 272-horsepower 2.0-litre turbo works with a 10-speed automatic and all-wheel drive to offer easy performance. I’ll always want more power, but the TLX doesn’t need more. There’s even an aggressive growl.

Yet performance under the hood only breeds chaos without a chassis to match.

This is where Acura rediscovered itself. The TLX doesn’t cope with corners; it wants them. Route 20’s best sections don’t require insane speeds to challenge a sports sedan  – there’s enough on this road to upset a vehicle’s balance and expose its shortcomings.

For much of my week in the TLX A-Spec, I opted for an Individual mode with the steering and suspension in Normal modes while the engine is tuned to Sport. (Comfort causes a bit of wallow in the suspension; Sport steering is unnaturally weighty.)

This combo still worked well on Route 20, particularly in the fun bits: the long sweeper past Prince Edward Aqua Farms, the uphill esses that lead to St. Thomas Anglican, the never-ending bend past Cape Road, the forested climb past John Murphy Road, and the approach to the Baltic River bridge.

Route 20 succeeds on its own merit. Like any good road, it earns higher marks when the journey takes place in a car that can get you back home before the kids wake up Mom.