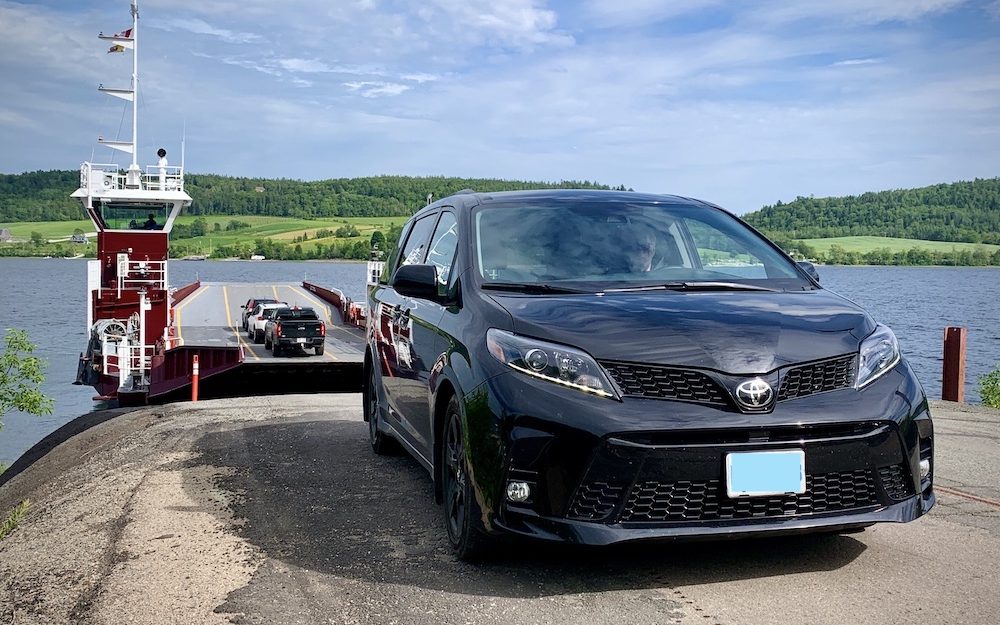 Road Trip: The pleasures and charms of the Saint John River Valley

“I’m still not sure I want to stay in a hotel,” I confessed to Garry, my husband and road trip soulmate. Compared to our usually hectic travel schedule, Covid-19 has kept us grounded and out of hotels for the last five months.

“Well how about sleeping in the van, then, camping like hippies?”, he joked. At least, I thought he was joking.

This city girl has not camped very often. The few ‘outdoor’ sleeping scenarios I’ve endured always ended with an eye swollen shut from an altercation with giant mosquitos. No joke.

This time was different though. For our road trip to New Brunswick, I actually considered sleeping in the van, the van being a 2020 Toyota Sienna minivan with a gargantuan interior. 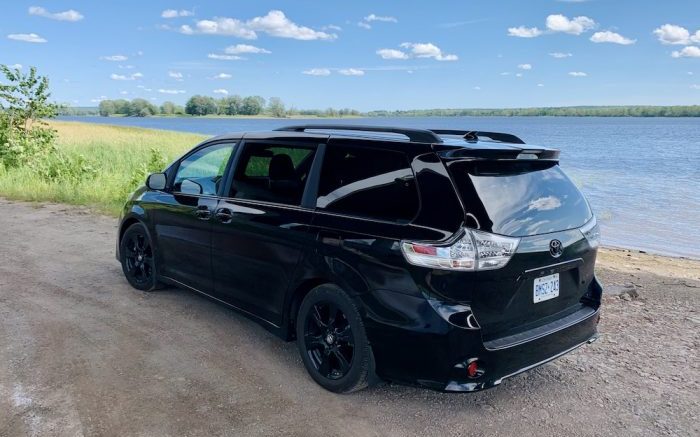 This may sound weird and so not sexy, but I’ve always loved the minivan.

The sliding doors, the impressive room for both cargo and humans and the snappy organization the storage compartments afford plus the giddy feeling of freedom of the open road.

I get into a minivan and immediately my inner hippie gets a hankering for hitting the road.

Having a week’s use of the 2020 Sienna, in Nightshade trim, with black on black everything, including a racy rear spoiler, probably thrilled me more than I should admit here.

Ride and handling in a minivan may not feel too nimble. The trade-off – ease of entry and egress, especially with the Sienna’s available dual power sliding doors, and the ability to fit almost a whole volleyball team within its confines – may be worth it.

The Sienna, actually no slouch in the handling department, is one of the few minivans to offer an AWD drivetrain. The 3.5-litre V6 engine paired with an eight-speed automatic transmission produces about 300 horsepower and makes for surprisingly peppy acceleration.

Enough about minivans. Back to the staycation road trip. 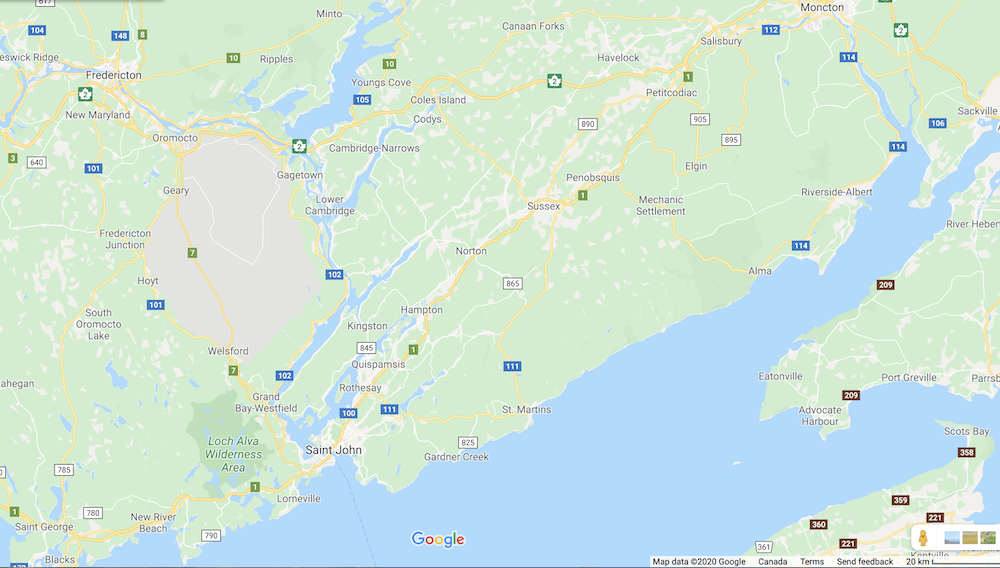 It’s not often that someone puts a full driving tour itinerary together for us. We’re usually the ones doing that for other people in our ‘real job’ as event planners in the auto industry.

But last week, we had the pleasure of being virtually guided around the southern Saint John River Valley in New Brunswick by dear friends, Joe and Pat Tippett.

The river, the land running its length and the 55,000 square-kilometre watershed at its mouth, where it flows into the Saint John Harbour and the Bay of Fundy, were designated a National Historic Site in 2011.

The area is significant to Canada because it represents the traditional territory of the Wolastoqiyik First Nation. The majestic river was used by the Wolastoqiyik for nourishment, both spiritual and physical, and transportation.

Joe and Pat Tippett are experts on what to visit in the area as their cottages along the Saint John River in Long Reach have been in their family going on four generations now. Not as long as the Wolastoqiyik, but still!

A stand-out of this region is Brent Rourke’s woodworking shop and factory in The Barn in Bloomfield.

A fine woodworker, Brent’s meticulously handcrafted shaker boxes are world-famous, as they ought to be. He’s made about 20,000 of them, including one for Queen Elizabeth II of England! 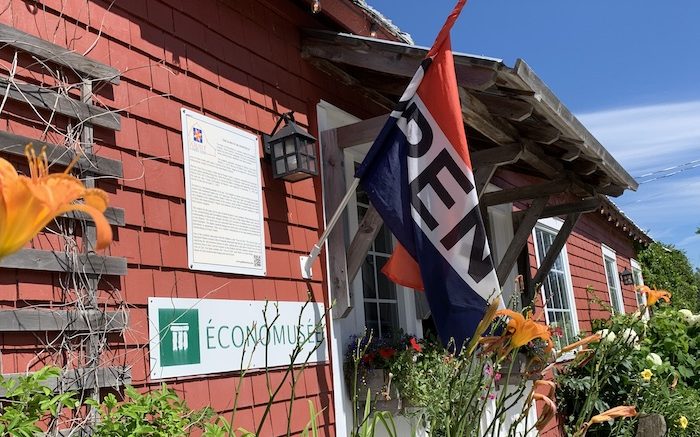 The region is also renowned for its covered bridges. We’ve always tried to veer off the beaten path when we see a sign for a covered bridge down some secondary, perhaps overgrown, road.

Usually we find them and drive through them. The Moosehorn Creek Covered Bridge is accessed by walking.

Approaching the historic bridge, under the forest canopy, is like stepping back in time to tranquility and peace. I find the graffiti spattered on the inside walls of the bridge kind of charming, despite the defacing of the weathered bridge.

What a quaint way to get across a rushing river. 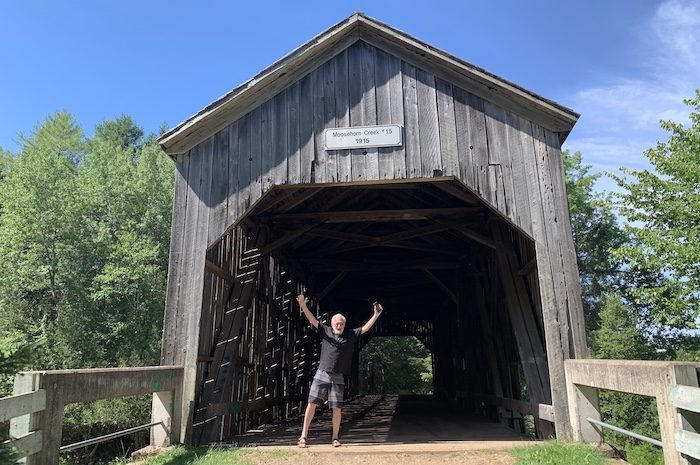 Another delightful way to get across the Saint John River: the cable ferry.

The car ferry is the unsung transportation hero around the world and cable ferries are the most unsung of them all.

This type of ferry has been in use since at least the 13th century with the earliest recorded one, Hampton Ferry, across the Avon River in England. Pulled by hand, there were no vehicles on this one, just monks, using a short-cut to get to their vineyards across the river.

Cable ferries can be coin-operated, powered by hand, engine, electric motor, or the current of the body of water the ferry is crossing. Of course, my brain can’t help but squirm a bit: What if the cable snaps? I’m sure someone has thought this through.

The eight cable ferries of the Saint John River system in New Brunswick are a part of the provincial road system.

Our road trip itinerary bade us go to the village of Kingston, founded by the United Empire Loyalists in 1783 at the end of the American Revolution. There, we found the oldest Anglican church in New Brunswick, the Trinity Church, built in 1785, as well as the MacDonald Consolidated School, built in 1904.

Next stop on the itinerary: Tippett Cottage. A quick visit with Joe and Pat included a chat overlooking the mighty river from their deck, a cup of tea and a slice of blueberry cheesecake. I’m not sure if this would be offered to just any roadtrippers passing by. I like to think we are special.

Joe then led us on a traipse through the woods, along the river, to the Cedars Lighthouse, a notable piece of New Brunswick history. The lighthouse, built in 1904, was part of a hotel complex from the days when riverboats, filled with city folks and tourists, plied the waters of the Saint John River. The hotel was demolished in the 1970s but the lighthouse, luckily, is in the hands of a heritage group. 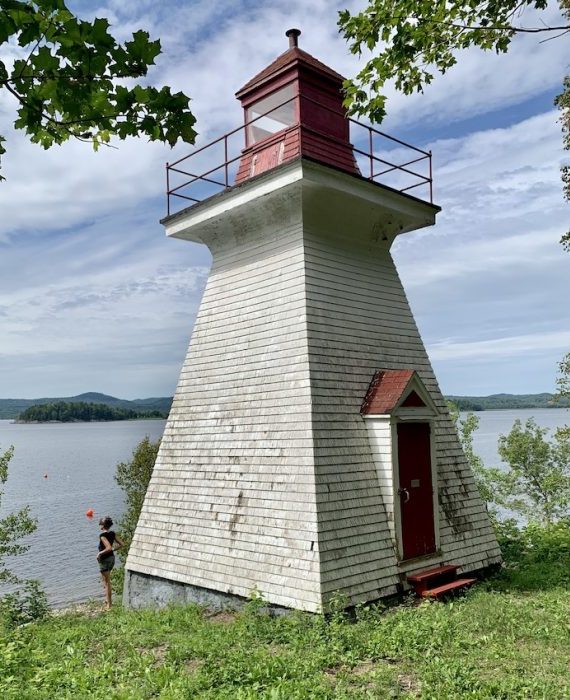 A couple of cable ferries brought us to the Evandale Inn, a stalwart and testament to the bygone days of riverboat travel.

Other pleasant features along the Saint John River are the heritage wharves. These concrete wharves, and the steamboats that would stop here, provided a vital link to the world for those living along the river, before rail and roads rendered them useless.

The Saint John River Society owns and maintains the remaining twelve now. They’ve become valuable as community gathering places. We stopped at one and, shhhh, napped in the van. That’s as close as we came to my hippy dream.

Gagetown is a must-stop. With three museums, a courthouse and an historic jail, the town is steeped in history. There are artisan studios, a marina, a weekend farmers’ market, art galleries and cute little pubs.

Running around these roads connected by cable ferries, we had the sense of never quite knowing where we were. Some travellers might find that unnerving but, for us, that’s the goal.

Get lost on purpose and see what happens while trying to get unlost.

Thanks to Joe and Pat Tippett of Long Reach for their entertaining, educational and just plain fun New Brunswick itinerary.

We didn’t sleep in the van overnight. By the time we got back to our driveway in Halifax, though, it kind of looked like we did. 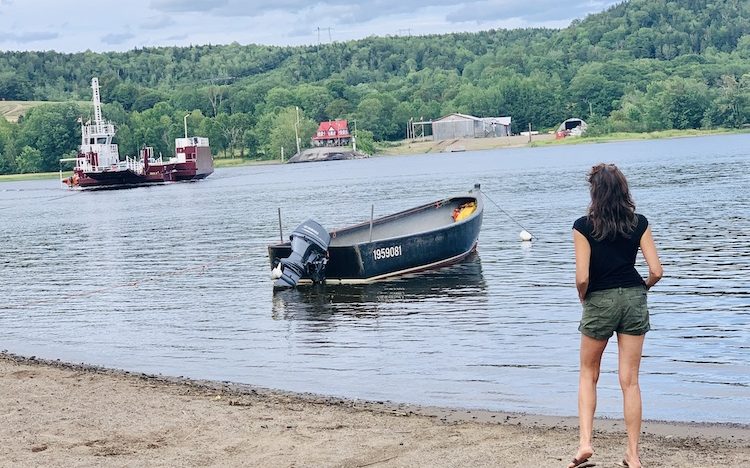