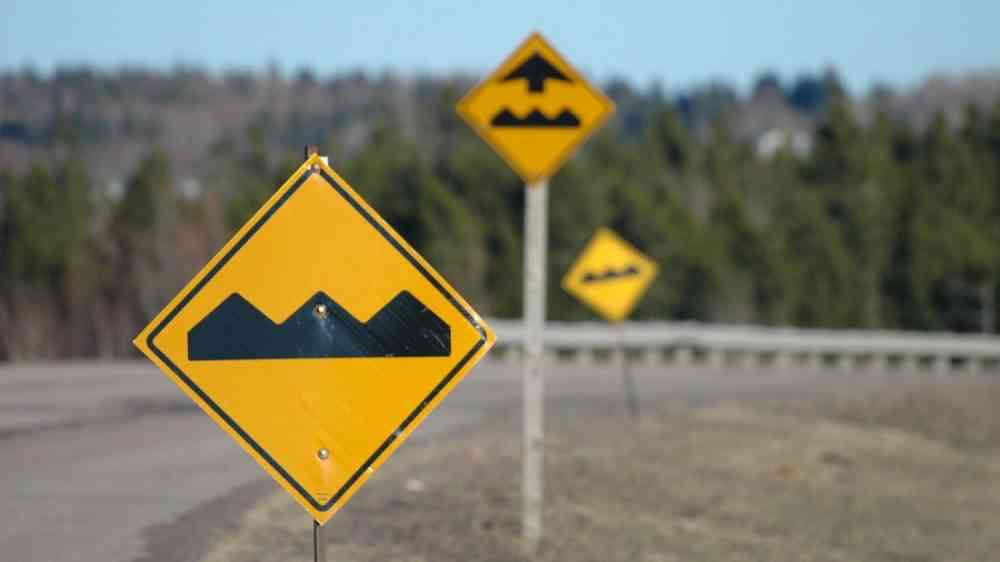 In pre-Covid days, wife Lisa Calvi needed to catch an early morning flight. I could have slept through the 03:30 alarm and let her spend $65 on a taxi. Or she could have driven herself to the airport and spent $100 on parking.

Being a good hubby, I took the high road. I got up, scraped the snow and ice off of the Volkswagen Touareg press tester parked in the driveway, then humped her bags out to the car.

It was an overcast, particularly dark, 4:45 a.m. when I backed the Touareg out the driveway and made my way to Highway 102 while she adjusted her look in the passenger side vanity mirror.

I was in early morning driving bliss.

“You know, if we drove, we’d be in Montreal by late afternoon, Lisa. We could do breakfast in Fredericton, lunch in Quebec City and dinner in…” BANG!

Had we been clobbered by a scud missile? The vehicle shuddered to its inner core. The low tire pressure light flashed on the instrument panel. The steering wheel shook from the blown left front tire that had lost the battle with the mother lode of potholes.

“Didn’t see that one,” I grumbled, pushing the four-way flasher button and pulling the Touareg over onto the shoulder of the highway. We were 11 kilometres from the airport and Lisa had 25 minutes before they closed her flight.

I got out and checked the tire while Lisa hit the phone trying to talk a cab into picking her up. No luck.

A taxi sped by. We tried to flag another but got an RCMP cruiser instead. The officer kindly offered to drop Lisa at the airport so the last I saw of my wife was when I opened the back door of the police cruiser to let her in.

I was tempted to put my hand on the top of her head like they do in COPS on TV.

Considering the cold, darkness and the process of figuring out the tire changing apparatus in the trunk, I called CAA instead and took advantage of a service I’d rarely used in the 35 years I’ve been a member.

I waited, loathing that pothole.

Who could I blame for this logistical hiccup? Why live here in this land of snow and ice? Why didn’t I take the other way to the airport?  Why hadn’t the department of highways repaired that miserable, low life, useless-to-anyone nasty we call a pothole?

“Potholes are one of the things in this world without one redeeming quality,” I mumbled, visualizing it laying in wait for its next victim.

“Oh here comes someone in a nifty new car, going to catch an early flight. Cool alloy wheels and low profile tires will make this one a sure kill,” it must have thought.

Didn’t see that pothole the size of a planet? Sadly, you have only yourself to blame.

A pothole starts with a crack in the pavement.  It fills with water then freezes and ever so slightly expands the crack compromising the pavement. Then it happens again. The crack gets bigger. Continuous pounding on it by buses, transport trucks and innocents like us opens it up even more.

Another freeze up and a couple scrapings by snowplows and soon that crack matures into something like a sinkhole. Especially here in Atlantic Canada.

The bottom line is the ultimate fault for anyone who hits a pothole and blows a front tire rests with the driver. Didn’t see it? Going too fast? No one else to blame.

I curbed the guilt about someone else solving my blowout problem while the CAA man changed the tire. Cautious optimism surfaced when he mentioned the pesky pothole might have only broken the bead on the tire and let the air out.

On the way back to the city, I considered the colossal job repair crews have, dealing with road repairs at this time of the year. While filling a pothole may seem simple, what about the logistics of identifying and prioritizing the problems, assigning the work crews, delineating the lanes and setting up the traffic control?

Things got worse when I get back to the city on one of those space-saver spare tire we all notice on cars and feel awkward about.

Turns out the tire had a blow-out hole in it and the rim was bent. To make matters worse, there was a goose egg in the side of the rear tire and that rim was bent too.

It took most of the day to sort out the repairs. I was haunted by feelings of anger, guilt and stupidity for hitting the nasty in the first place.