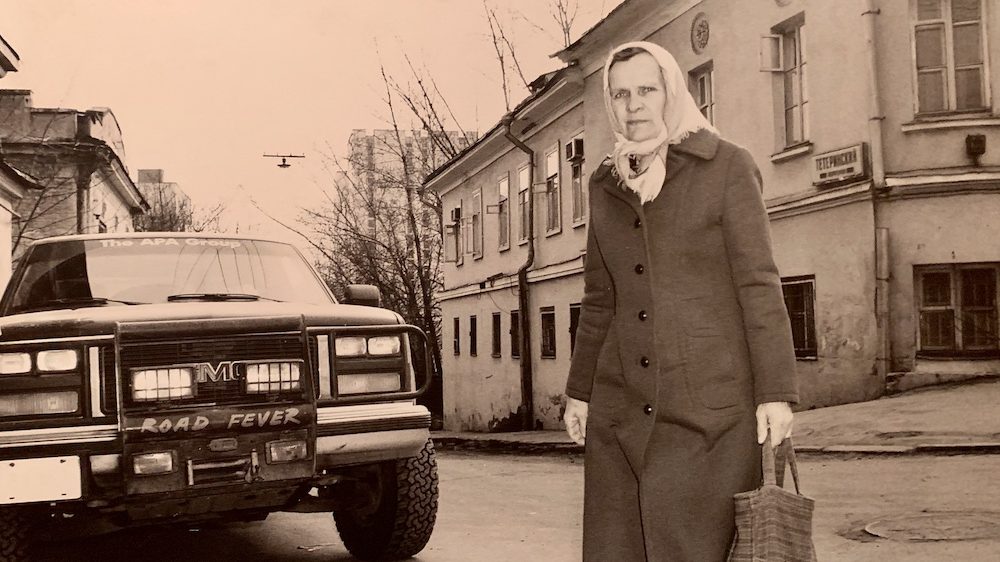 UZHHOROD, Ukraine, March 24, 1992 – Garry takes a daring drive into the freshly-crumbled Soviet Union to deliver a truckload of donated children’s books from England to Moscow. First, he has to get across Ukraine. Vehicle Insurance? Um, what’s that?

James Brown is free! proclaimed the last piece of graffiti we spotted leaving (then) Czechoslovakia approaching the Ukrainian border. It was scrawled across the front of a dilapidated sun-bleached cottage. A few hundred yards down the pot-holed road, a heavy blonde lady in a bulky uniform welcomed us to Ukraine. Her icy blue eyes stared right through me.

“SUPER!” she exclaimed, breaking into a smile as she checked out the paint job on our displaced 1988 GMC Sierra pickup. It was the same extended-cab 6.2-litre diesel truck in which Tim Cahill and I had broken the speed record from the bottom to the top of the Americas five years earlier, in the fall of 1987.

Ten minutes later, my navigator, Beverly Barrett, and I were cleared into Ukraine and headed for the currency exchange building. No one had looked in the back of the then four-year old GMC Sierra 3500 pickup.

I passed the lady behind the currency counter three American one-hundred dollar bills. The custodian of rubles straightened out her short red crushed-velvet dress, which probably fit better years earlier, and handed the bills back, shouting something to us in Russian.

“It’s too much money,” whispered an Italian businessman waiting in line behind us.

“But we’ll be here for a couple of weeks,” I told him. “We’re driving to Moscow with a donation of 4,000 children’s books we picked up in London.

“Your truck will probably be stolen, vandalized for sure.” It was a warning we’d heard before.

After changing $200 for 17,000 rubles, a three-inch stack of crisp new 50s, we felt like a couple of mafia dons walking out to the truck, which now lacked one basic Western motoring accessory – insurance. We would try to buy it in Uzhhorod, a few kilometres down the road.

We slid into a dingy monochromatic world. Colour simply disappeared.

We passed row upon row of identical high-rise apartment blocks that, from a distance, looked like giant doll houses rotting in a neglected yard. Limp, faded laundry hung from the balconies, hopelessly waiting for the sun to cut through the thick blanket of haze that dulled the landscape.

For a minute, I felt like turning around, giving the wad of funny-money back to the flashy ruble lady, and heading to the French Riviera. 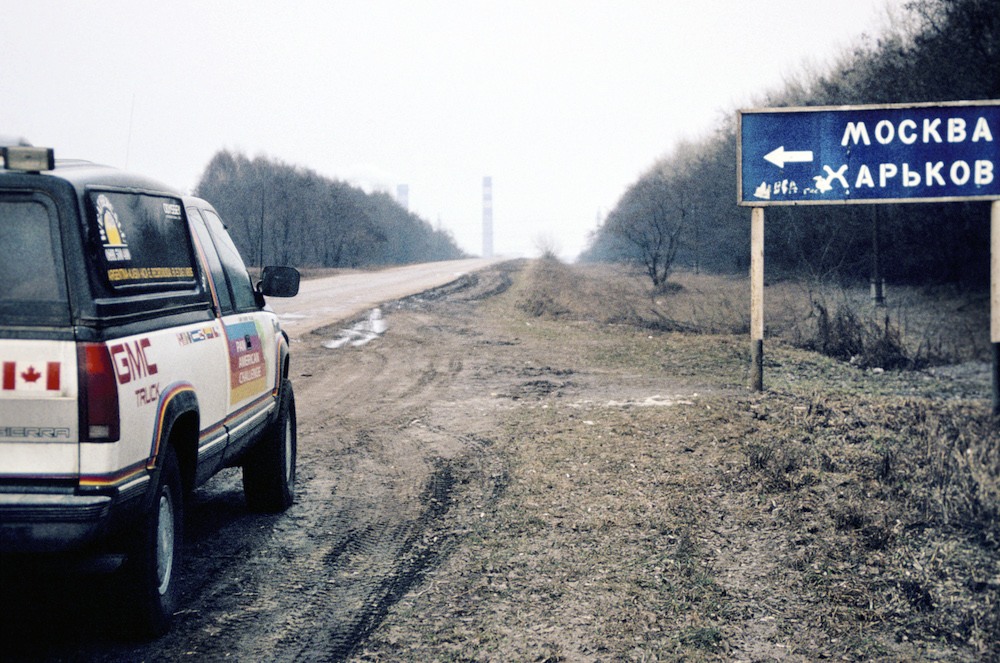 A thousand eyes pinned themselves on us while we cruised the broken streets of Uzhhorod looking for a hotel. I was imagining what an animal in a zoo felt like when Beverly noticed an Intourist hotel sign with an arrow pointing to a 12-storey monolith. A few bruised Ladas were parked haphazardly out front.

I maneuvered the Sierra into the guarded parking area behind Hotel Zakarpatie and we ventured inside. A half-dozen attempts to communicate got us room keys. It came with an official visitor pass that was diligently scrutinized by a uniformed elevator guard.

“Let’s freshen up and get something to eat,” I suggested to Beverly.

The water from the tap in the cavernous bathroom had an unusual green tint so I brushed my teeth with a bit of the gin I had stowed away in my suitcase. We took the elevator to the Hungarian Hall on the top floor where, apparently, we could dine to the music of a live band.

The Hall turned out to be one of the most brightly illuminated rooms I have ever been in. Music from a four-piece ensemble overpowered the roar of three hundred diners as we were led to our table and fed a greasy chicken concoction washed down with lukewarm beer that tasted like ammonia.

In the morning, the hotel’s Intourist agent presented our options. The city of Lviv was 260 kilometres away, on the other side of the Carpathian Mountains. It didn’t have a hotel with guarded parking. This wasn’t too appealing, especially since the only available insurance for the truck would cover damages we might inflict on Russian property, and nothing else.

If we were broadsided, the truck stolen, vandalized or whatever, it would be our tough luck. Insurance was not something Soviet drivers knew anything about. It seemed an accident was simply an accident in their world. 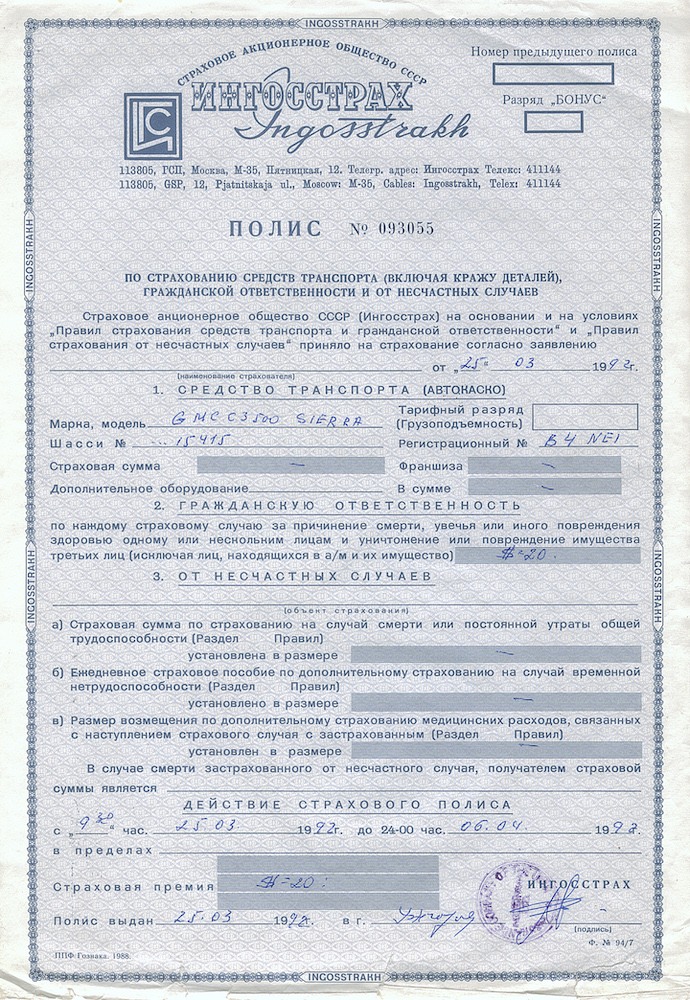 With this in mind, the logical option was to drive past Lviv to Rovno, another 220 kilometres, where the Intourist hotel had a lock-up. Since driving at night was frowned upon by local authorities, and Rovno was a 10-hour drive, we hit the road without delay.

Beverly soon learned to decipher the Cyrillic road signs with the help of a chart she found in a guidebook, and we located the road to Lviv. Lingering banks of dense grey fog clung to the slopes of the Carpathian Mountains as we maneuvered along the winding, rutted road.

Traffic was light, but the mud thick, and it took six hours to cover the 260-km drive to Lviv . Since there were no direction signs in Lviv, we followed the streets with the most oil stains through the city of 750,000 then continued east on a concrete road to Rovno. 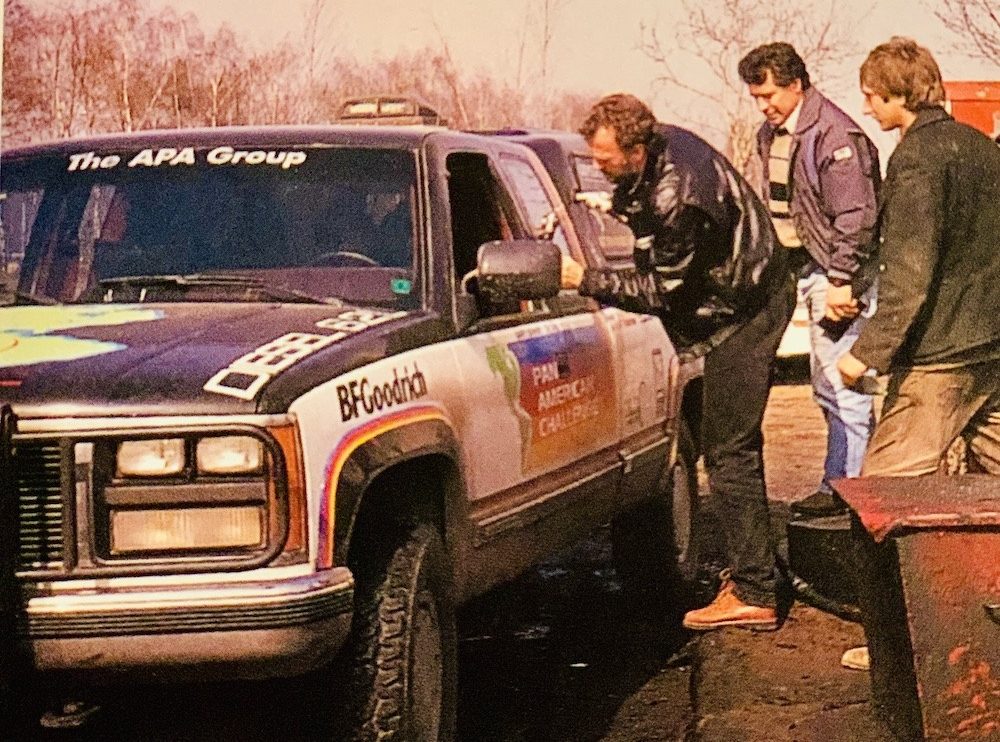 It was evening when we arrived. Beverly did a fantastic job homing us in on Hotel Mir, another cement Intourist hulk. The city had a weird feel about it – people hustling around in the darkness. There were no lit signs, no streetlights.

A few pale traffic signals flashed feebly while cars and trucks with blatting exhaust moved around in the dark like crickets prowling on a moonless night. I kept our park lights on and drew a host of flamboyant gestures from faceless silhouettes who probably considered us extravagant fools.

In my imagination, I could hear air raid sirens wailing.

Part 2 – Mission to Moscow: Spasibo! – click here. What could possibly go wrong trying to get into Russia with 4000 books and visas purchased from a travel agency at London’s Charing Cross tube stop? 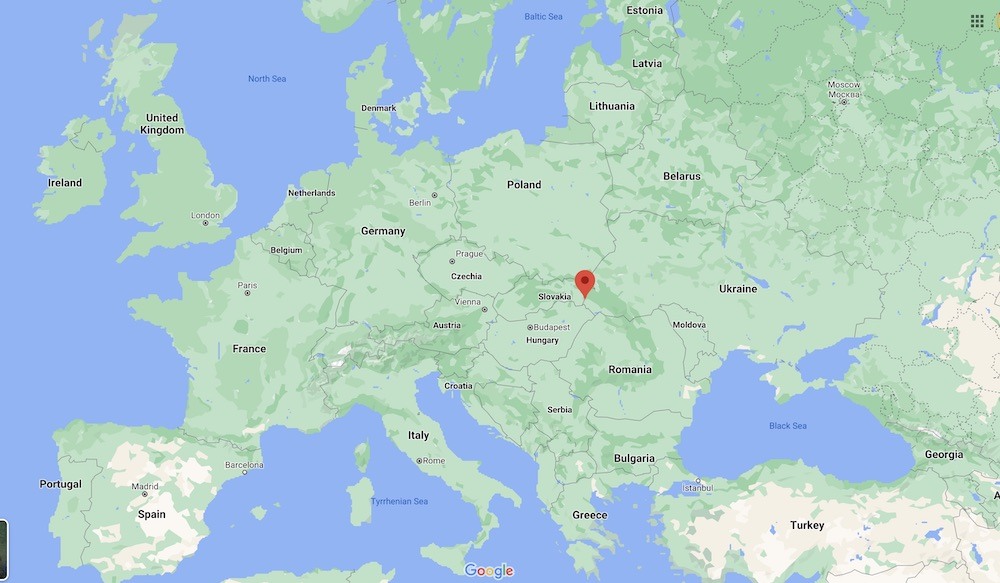