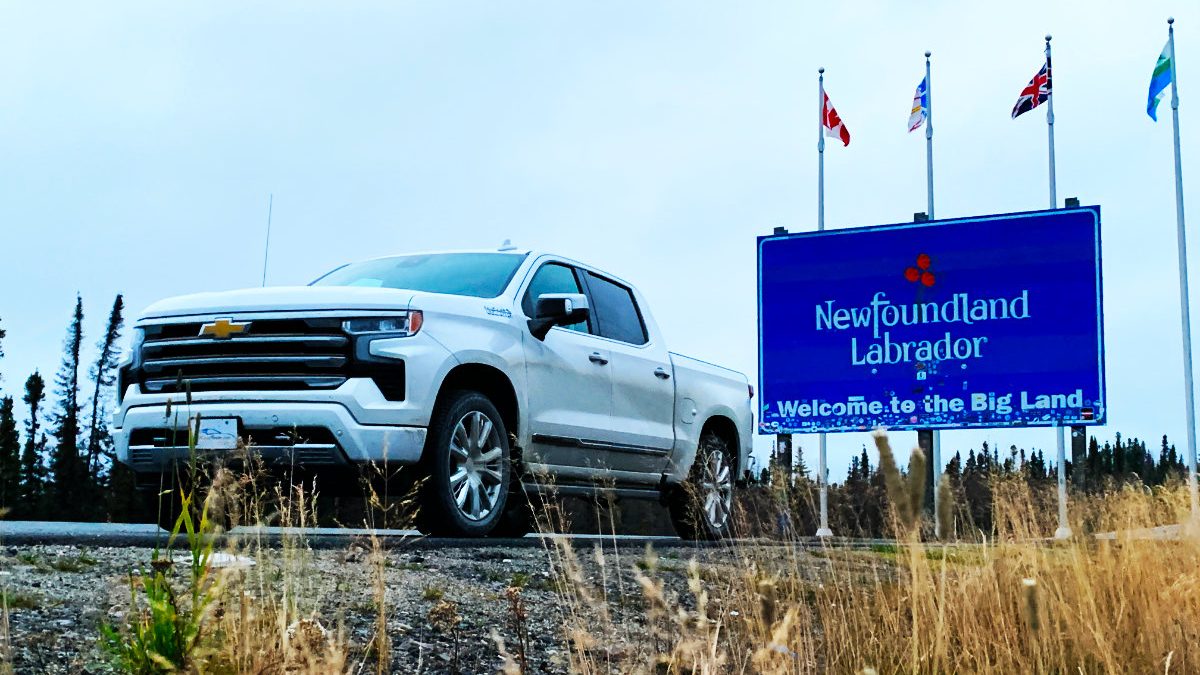 Lab Work: Across The Big Land in a Chevrolet Silverado

Many Canadians know Labrador as the mainland portion of Canada’s most easterly province.

Flung against the cold North Atlantic seas, its rough triangular shape comprises 71% of the province’s area but is home to only 6% of its population. With that pub quiz stat in mind, it’s fair to call this place an exceedingly remote part of the world.

The Big Land, Labrador, is remote and that’s part of its charm

Remote, but not untended. Earlier this year, the provincial government made a great deal of noise about connecting one end of this vast land to the other with an unbroken ribbon of pavement.

The road out of Labrador City, called Route 500, is a 530-kilometre stretch which has been paved for about the last five years.

Connecting the towns of Lab City and Happy Valley-Goose Bay, the road makes its way through the company town of Churchill Falls and scythes through some of the most storybook-pretty landscape this side of a Monet canvas. 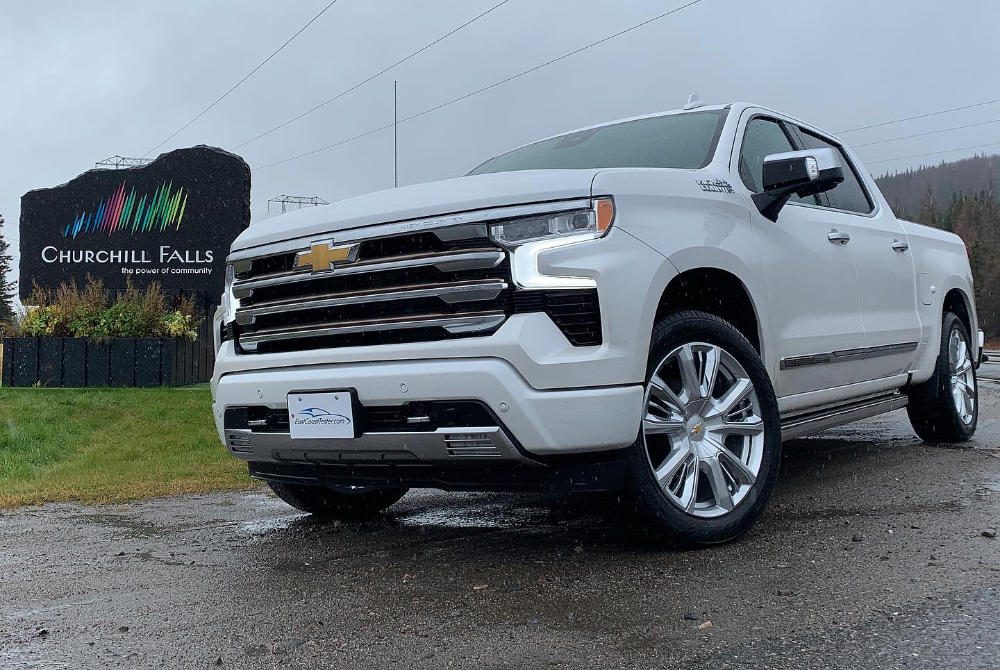 Rutted and ‘evil’ Route 510 is now smooth and civilized

Past the twin towns of Happy Valley-Goose Bay, it was a tough 610-kilometre trek over a mud-covered and evil Route 510, all the way south to the land’s coastal border with the Strait of Belle Isle and beyond.

Ruts and deep furrows lay waiting to swallow the unsuspecting and unprepared, making the journey a day’s undertaking – or far more if the driving gods weren’t smiling in your favour. 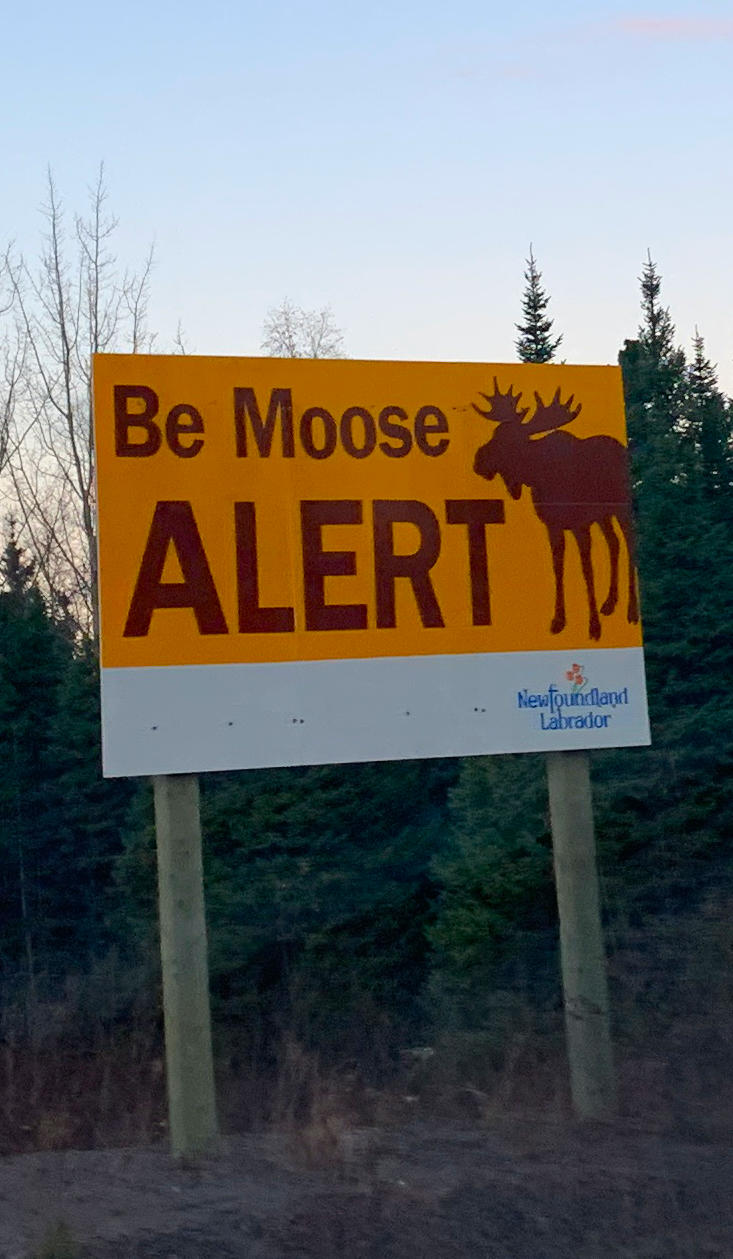 That’s now squarely in the past. After pouring nearly a billion dollars into Trans-Labrador infrastructure over the last 25 years, paving crews sealed the last click of this 1,100+ kilometre route back in July.

It was no small undertaking.

Tasked with building a solid highway atop land which turned the old dirt road into an oozing morass, crews dealt with passing through uninhabited and undeveloped wilderness intersected by over 100 watercourses ranging in size from streams to raging rivers.

Survey data from nearly 2,000 hydrometric depth soundings were used to puzzle out the build, plus a study on tides, thanks to the effect that crushing river and ocean ice would have on bridges.

We agree, which is why we saddled up a 2022 Chevrolet Silverado High Country headed out from Nova Scotia to points north.

Intending to drive the length of this newly paved road from Labrador City all the way to L’Anse au Clair meant getting to Lab City in the first place, involving a 585-km journey through the wilds of Quebec. 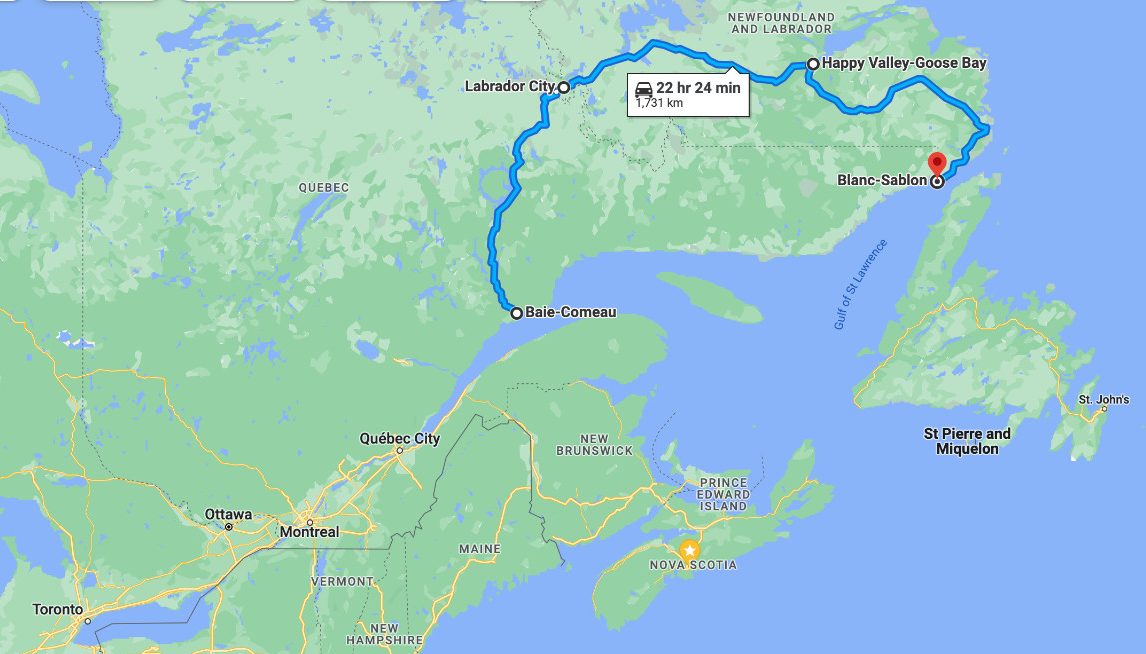 Setting out from Baie Comeau on the St. Lawrence River, we ventured north past the immense Manic 5 hydroelectric dam and past the ghost town of Gagnon. 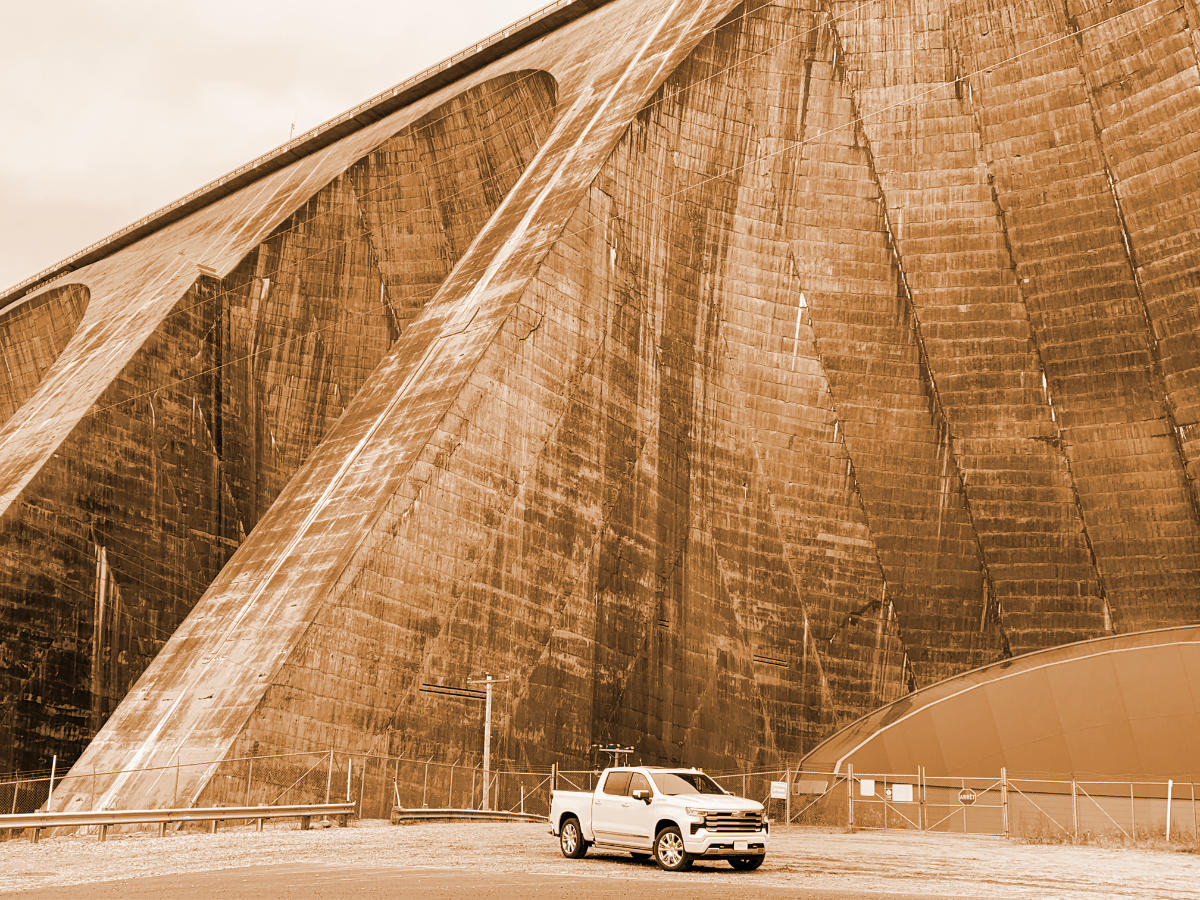 We travelled on surfaces as varied as pristine new pavement and muddy tracks so twisty we half expected to see our own taillights on more than one occasion. 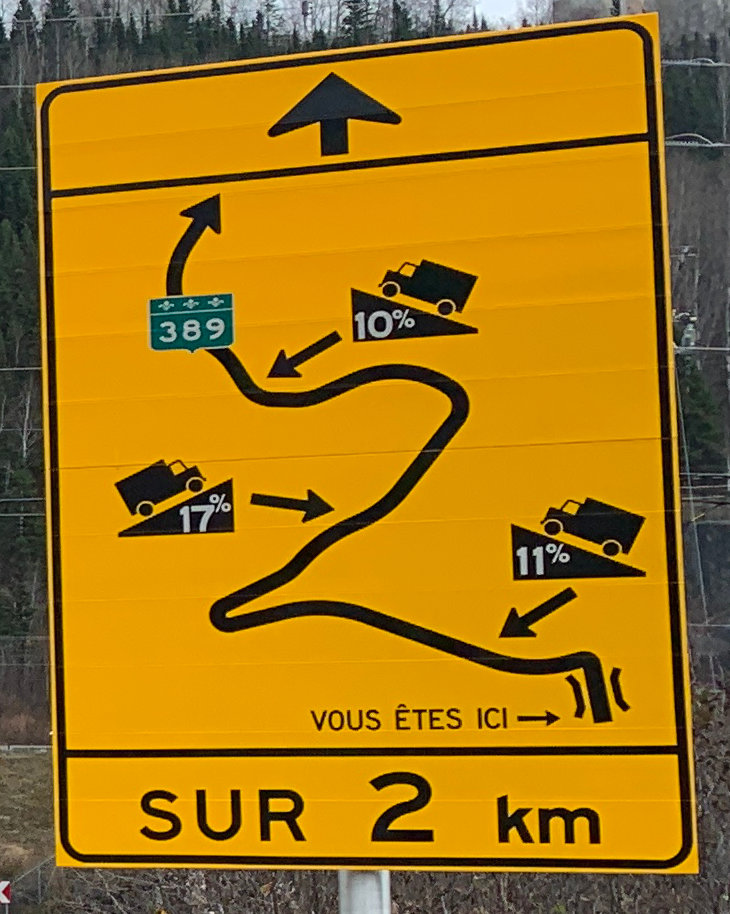 Frighteningly large iron ore trains towered over us near the route’s end.

This changes when you hit the Labrador border, greeted by an appropriately gigantic ‘Welcome to the Big Land’ sign and pavement so level one could play billiards on its surface.

Spending the night in Lab City at the Two Seasons Hotel was an easy choice after a day on Route 389 through Quebec.

Firing up the Silverado’s 6.2L V8 the next morning, we grabbed some fuel amongst the hordes of company trucks starting their day at the Esso station and began heading across Labrador.

As mentioned, this part of the route has been paved for about five years, and must have been laid with Chuck Norris’ hand because it is yet to exhibit much heaving from frost or cracking from the area’s brutal winters.

Satellite radio pops up in stretches here but cellular service drops off just a few minutes outside of town. Save for a few services in the company town of Churchill Falls at roughly the halfway point, you’re on your own for fuel and eats.

But the scenery makes it all worthwhile. Treed vistas go on seemingly forever, subarctic taiga just begging drivers to stop and take a few pictures. Which, of course, we did. 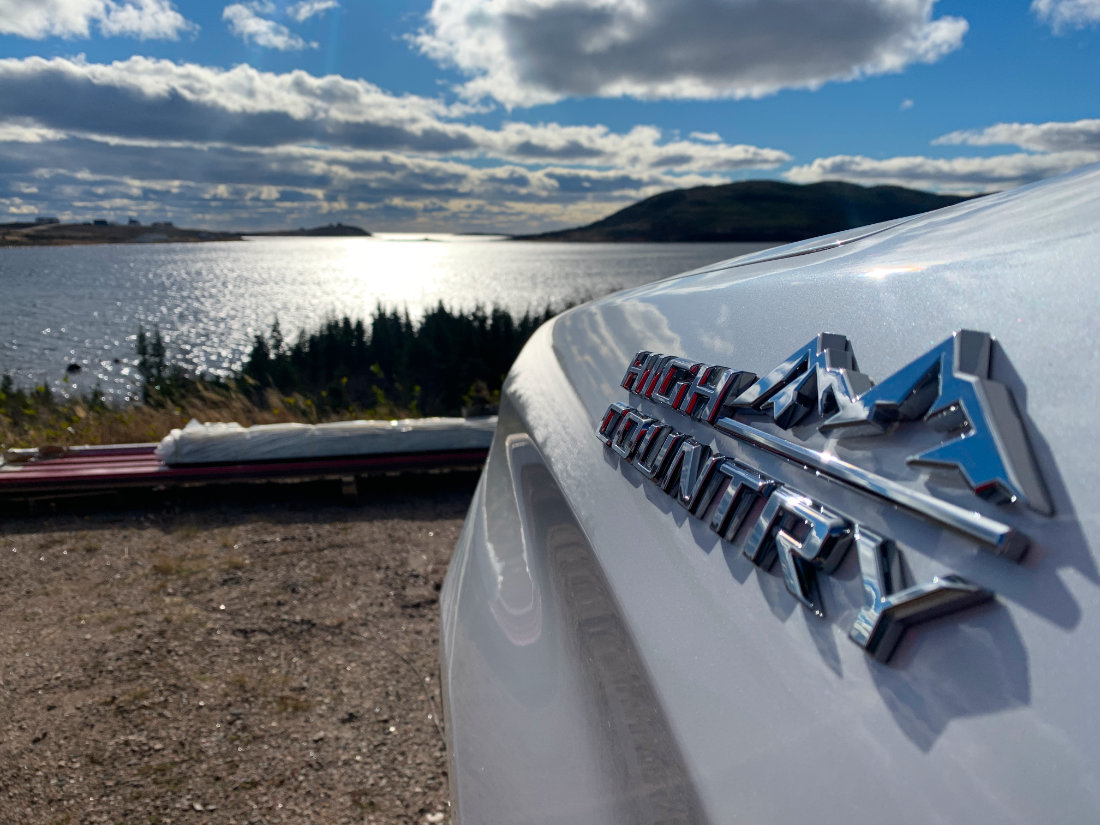 The single-lane bridge flying over the mighty Churchill River, a waterway which provides electricity for humans so far away as New York, was an engineering sight to behold for those interested in that type of wonder; the crystal-clear views will entrance everyone else. 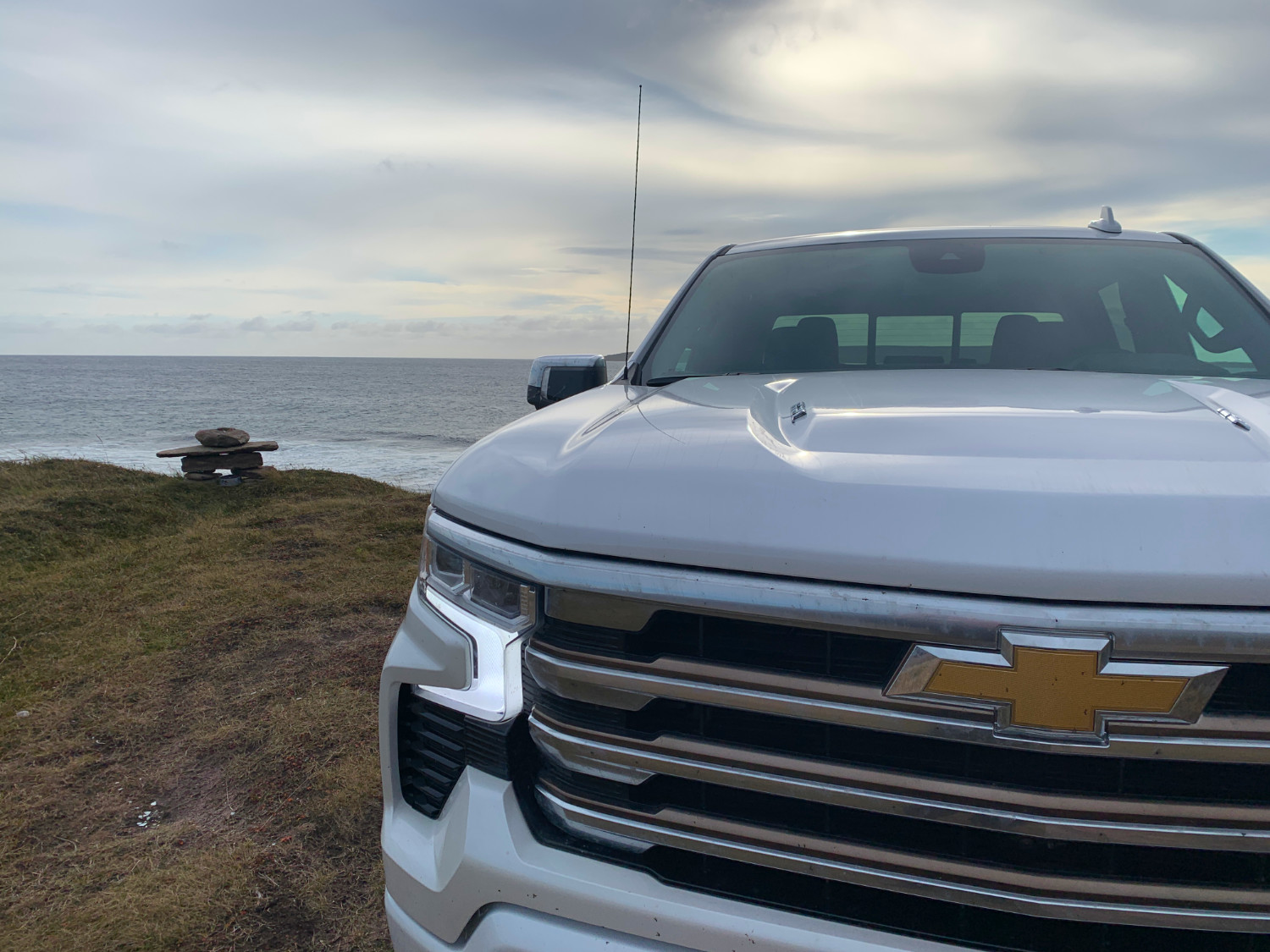 Just a kilometre or two outside of Happy Valley-Goose Bay is the turn-off to the southern portion of this Trans-Labrador Highway – and the area’s newest stretches of pavement. 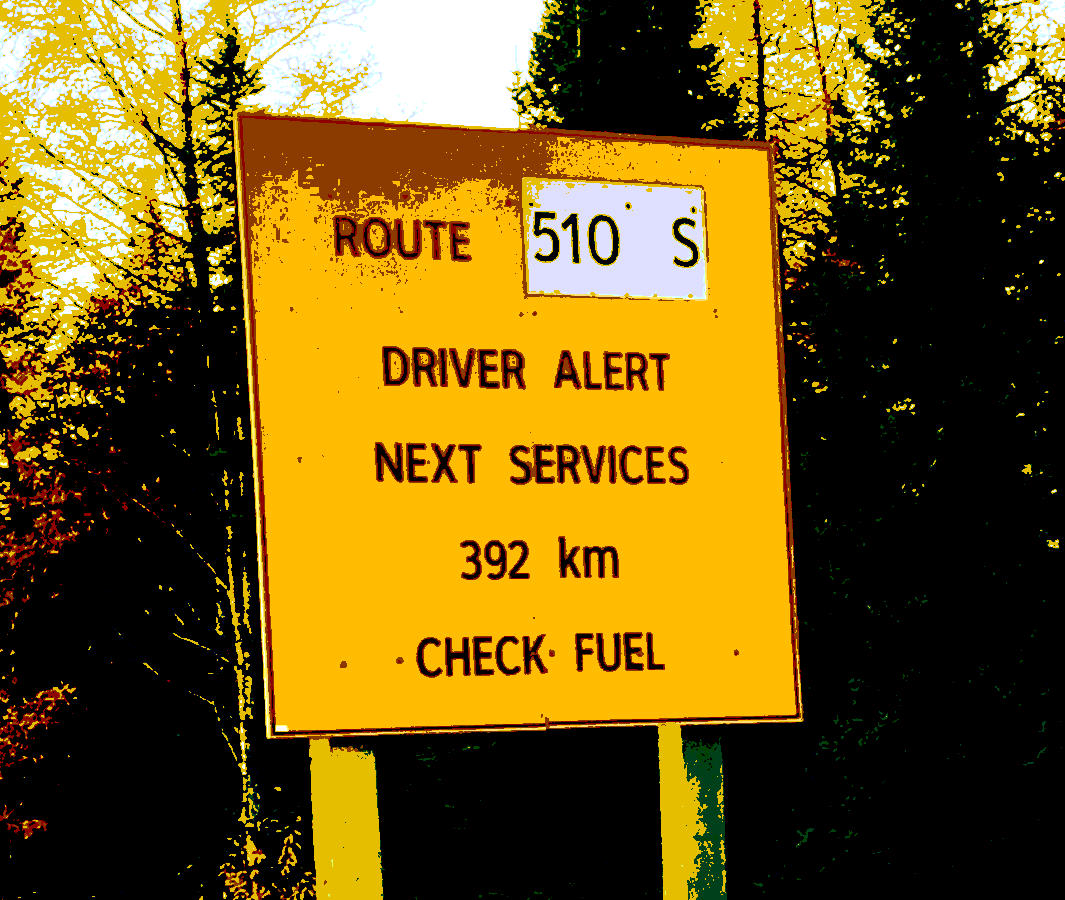 A towering sign warns all hands there are 392 kilometres until the next service stop, meaning drivers gotta check that fuel gauge before even thinking about turning a wheel south and serving as a reminder that while the road is paved, Labrador remains very remote.

This freshest ribbon of macadam gently curves along the land – working with it, not against it – in a stark contrast to other paving projects which simply bullied their way through the scenery.

This stretch is arguably even prettier than the one out of Lab City. The sweet smell of forest trees literally worked their way through the Silverado’s ventilation system, prompting us to stop more than once along the unspoiled route. 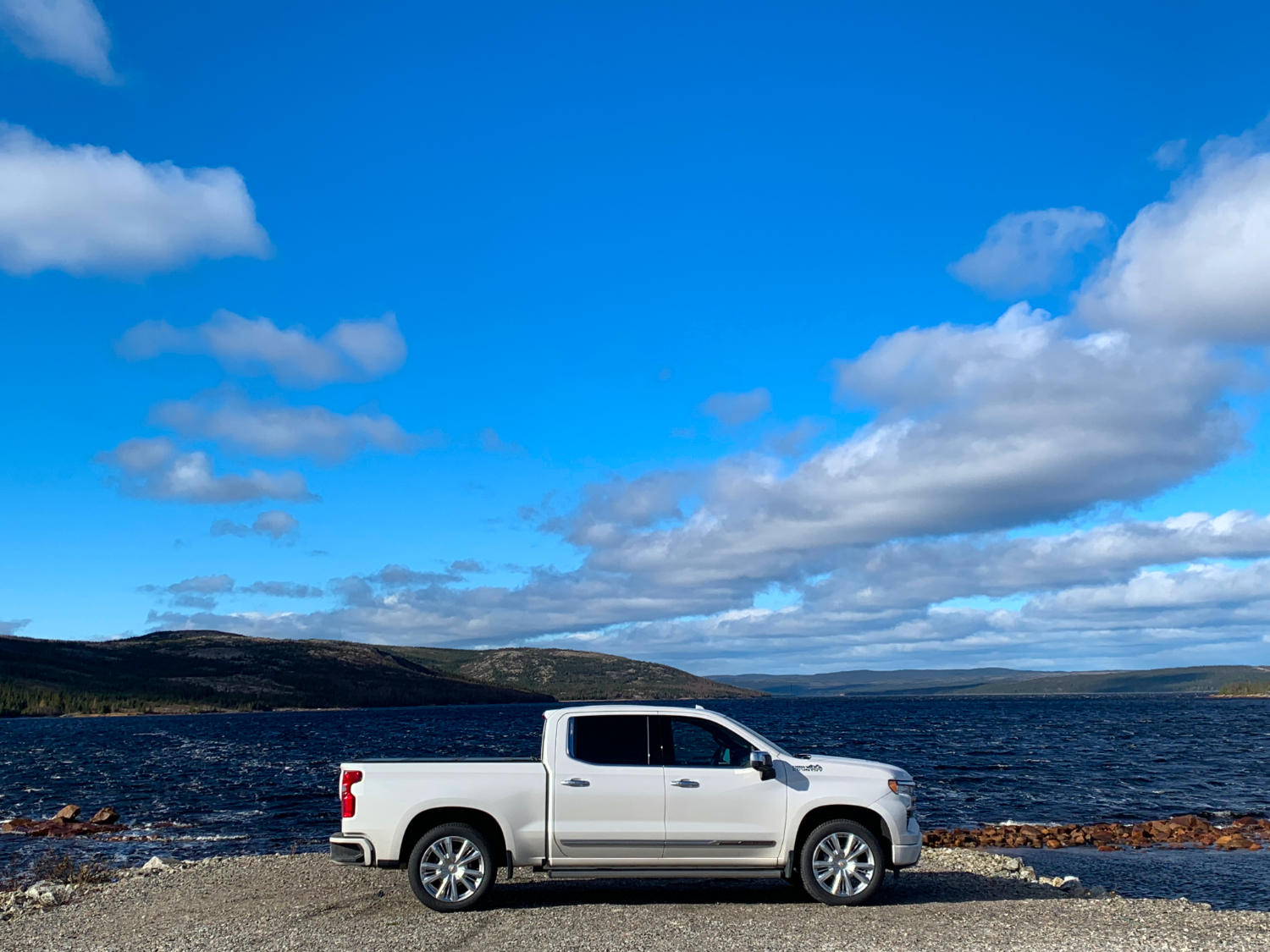 Stepping out of the pickup at one of the wide paved areas intended as a rest stop, gale force northeasterlies and the notable lack of guardrails between the road and frigid bog sitting several feet down.

A moment’s inattention would surely result in a freezing dip. It’s remote out here, remember?

Gale-force headwinds stymied our fuel economy in the Chevrolet Silverado

It was those headwinds which were fighting the smooth pavement to scupper any chance of fuel economy heroics. Still, the 420-horsepower V8 returned an indicated 12.1 L/100km over the 3,500-km drive, numbers which could probably have been improved with more favourable winds on Mother Nature’s part and less idling whilst snapping photos on our part.

Chevrolet has finally dragged the Silverado’s interior in line with its competition, now full of appropriately enormous infotainment screens and the type of quality materials once unknown to GM execs. The cabin brims with trick storage and does without look-at-me gimmicks like silly motorized gear levers.

And visit a chiropractor if you can’t get comfortable in these seats, ok?

Parts of Labrador are unspeakably remote – but it is also unspeakably beautiful. We’re glad to have made the trek. 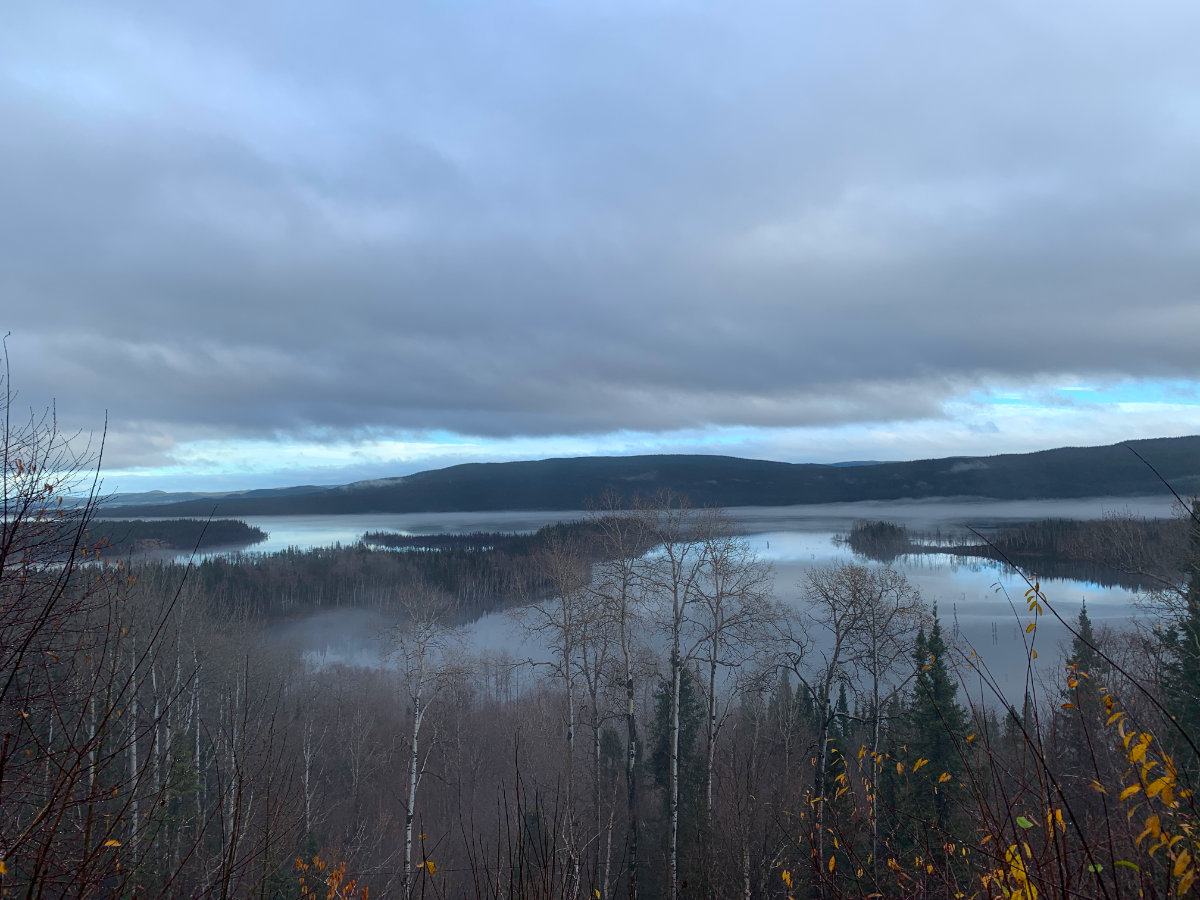