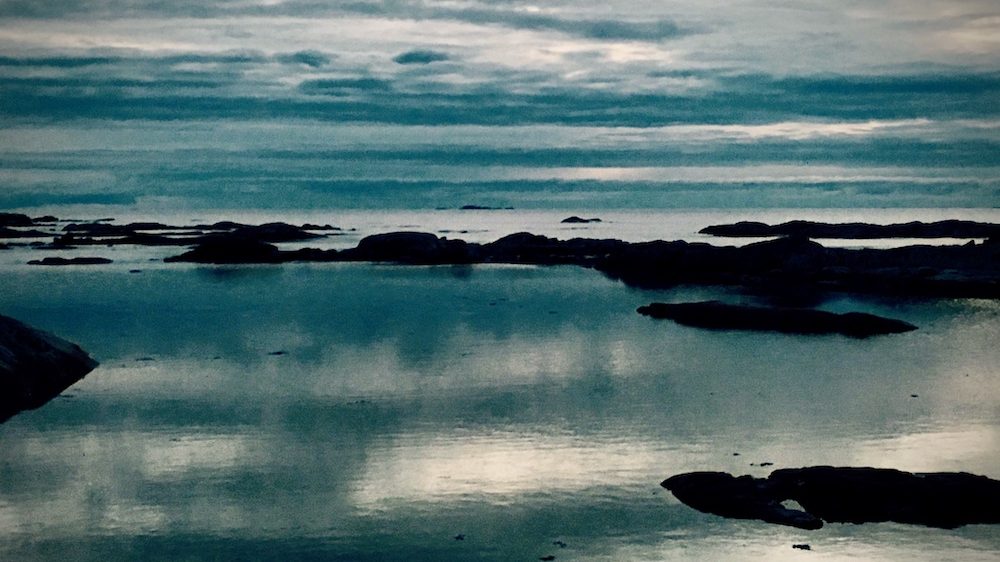 Going with the flow: A slow drive on Newfoundland’s Baccalieu Trail

If you, like me, spotted Newfoundland’s Baccalieu Trail on the map and thought that it looked like the perfect stretch of coastal roads for a day of quick driving, you’re probably going to be sadly disappointed.

An important part of vacation, though, especially when in Newfoundland, is going with the flow, and if you go with these roads, you won’t find fast, but you will find a surprising amount of things to see and do.

I set out in the most glamourous vehicle of all, one of the island’s ubiquitous Dodge Challenger rental cars, with the V6 and painted all black. That’s after the agent at the rental desk tried to tell me the midsize I had booked was actually a Chevrolet Spark. I looked down at myself, up at the car, and gave the agent a confused head tilt.

They gave me the Challenger for the price of a Big Mary combo and I was on my way. 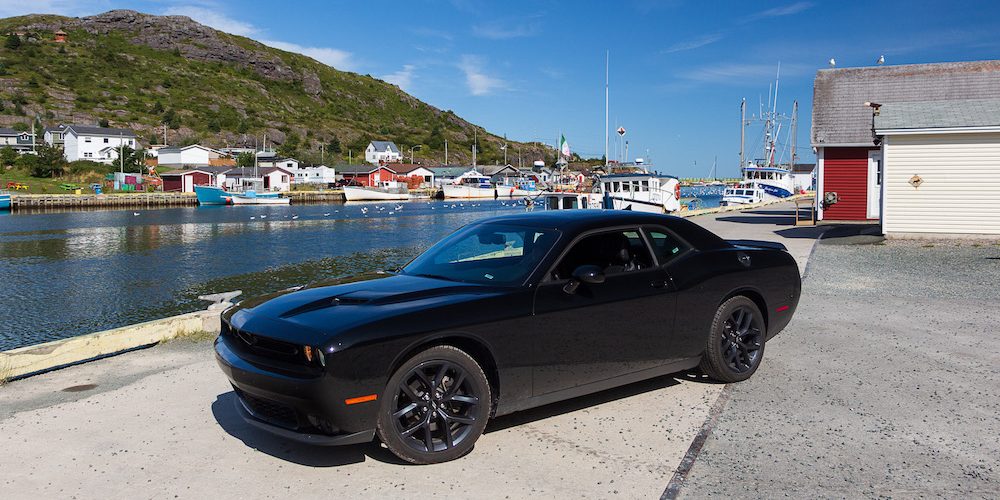 The Baccalieu Trail starts in Brigus, on highway 60, about an hour west of St. Johns. You might not recognize the Baccalieu name, but you’re probably already familiar with its most famous town. We won’t be getting there before evening, though.

While our day started early, following the Admiral’s Coast route along Route 60 to get from Newfoundland’s capital city to this smaller peninsula, there’s a place you’d better not skip here. The Station Diner, in Holyrood, has the best onion rings I’ve ever had (and the fish was good, too).

For a small place in an even smaller place, that’s a heck of an accomplishment. I’ve eaten a lot of onion rings, believe me.

Further down the road is the picturesque town of Cupids. This is the oldest continuously settled British colony in Canada, though it postdates the settlements in St. John’s by more than a century.

From here, the road largely follows the coast.

Unless you have days to spend, you might not want to take a trip down and through every town along Conception Bay, because there are dozens of them, and because the speed limits along here rarely climb above 60 km/h. 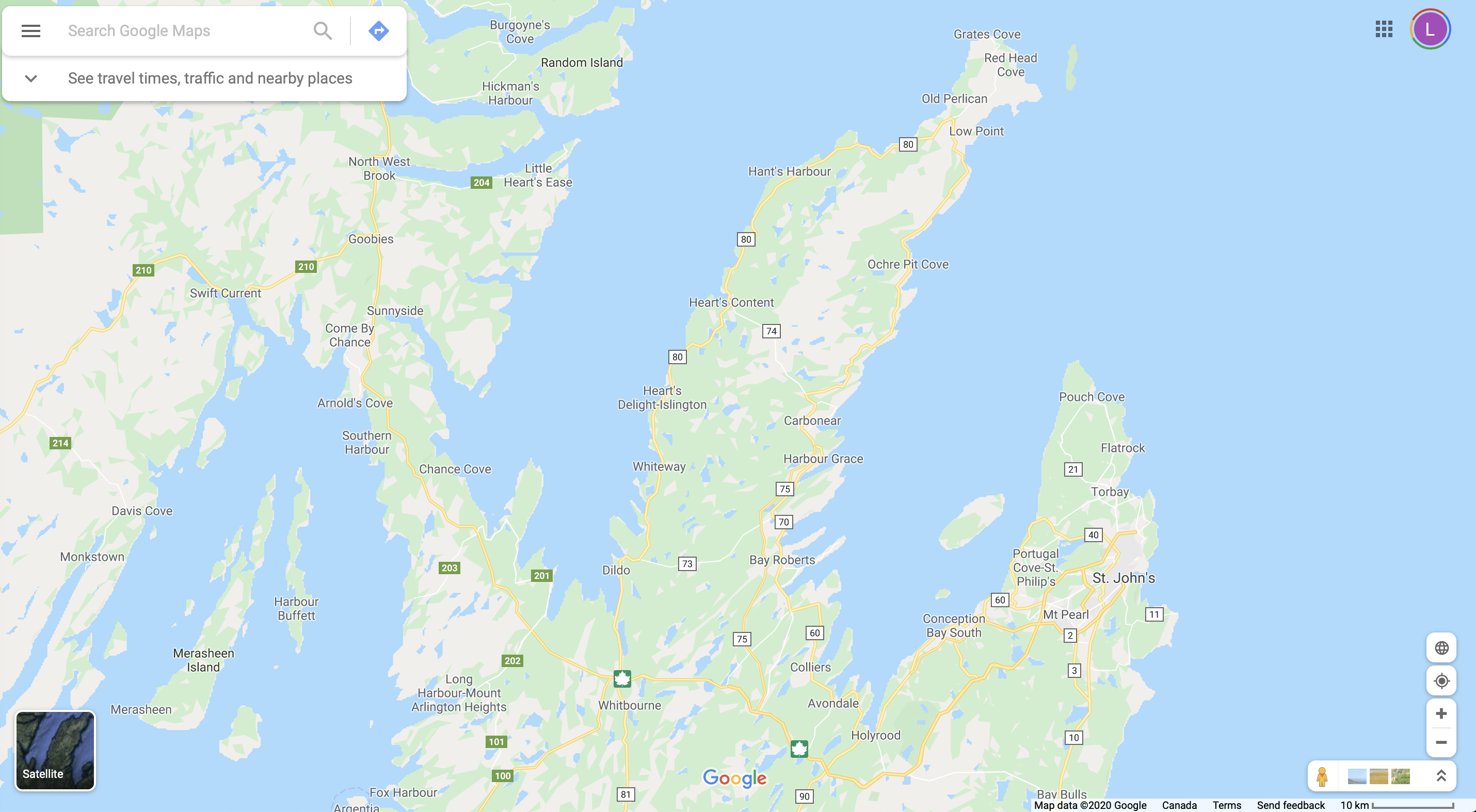 Like I said from the top, if you were expecting to exercise your tires in this corner of Newfoundland, you’re in the wrong place.

Our next stop was in Harbour Grace, where a DC3 sits prominently displayed on the edge of town. The town was used as the point of departure for many attempts (and nearly as many tragic failures) to fly across the Atlantic Ocean.

The first successful flight from here was in 1927.

Amelia Earhart departed from Harbour Grace in 1932 to become the first woman to fly the Atlantic solo. 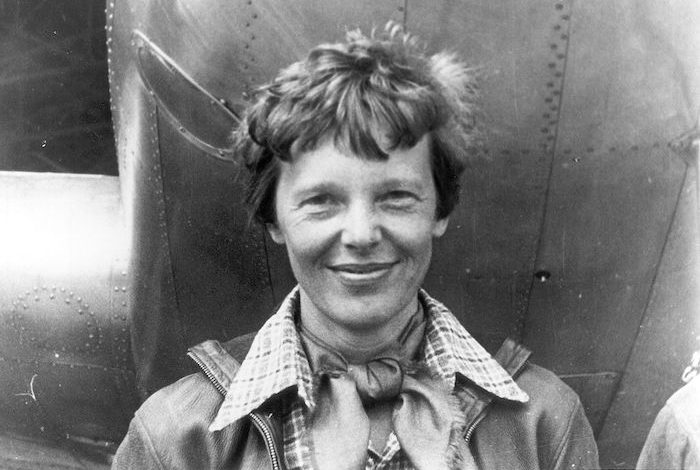 The DC3 you’ll spot on the edge of town isn’t the location of the old runway. That’s still open and higher up the hill, but you may not really need to see a grass strip. Although, seeing the grass strip and pondering human accomplishments is not a bad way to spend a half hour, either.

In the harbour of Harbour Grace lies the SS Kyle, a 67-metre steamship that ran aground in February 1967. Largely abandoned since then, after transporting cargo and civilians between Carbonear and Labrador for decades, the SS Kyle was fast. Known as the ‘Bulldog of the North’, the ship set a record, under Captain Guy Earle, sailing from Newfoundland to the West Indies and back in 21 days.

Carbonear is your last chance for large town shopping, if that’s something you need to do, but there are plenty of cafés and shops along the route for souvenirs, snacking, and meals.

Our next stop was at Northern Bay Sands. There’s a small fee for access to the beach, but it’s a broad expanse of sand that even in late September had plenty of people enjoying the sun and, yes, even the North Atlantic water.

It’s a hardy crowd in these parts.

If you’re planning on camping, then this former provincial park is a great spot to do it.

Sadly, Newfoundland privatized (or closed) nearly all of their provincial parks in the 1990s, so you’ll find several beach parks like this where a fee is charged for access.

The highway, now Route 70, winds its way along the coast until just past Caplin Cove. At that point, it crosses toward the center of the spit of land and puts you in Old Perlican, one of the oldest fishing communities in Newfoundland, and a crossroads. 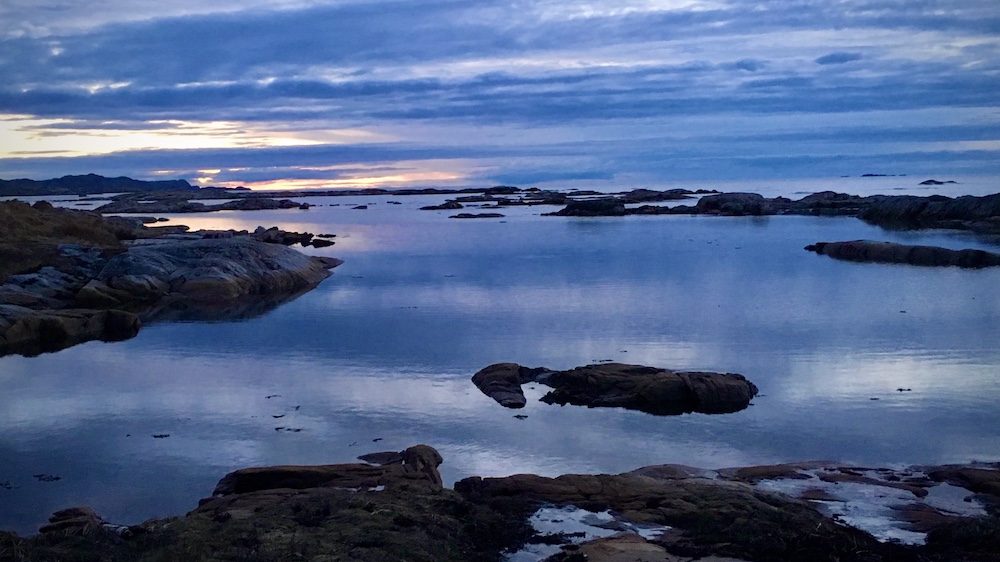 Keep heading north and you’ll reach Grates Cove, where Cabot is said to have landed. The community is more notable for the heritage rock walls spanning the area to keep livestock out of garden crops. The walls were once common around the province, and have made this walled landscape a National Historic Site.

It’s not a long drive to the tip of this part of the province and back, but you may find that your heart pulls you to make the left turn onto Route 80 and start heading back down. 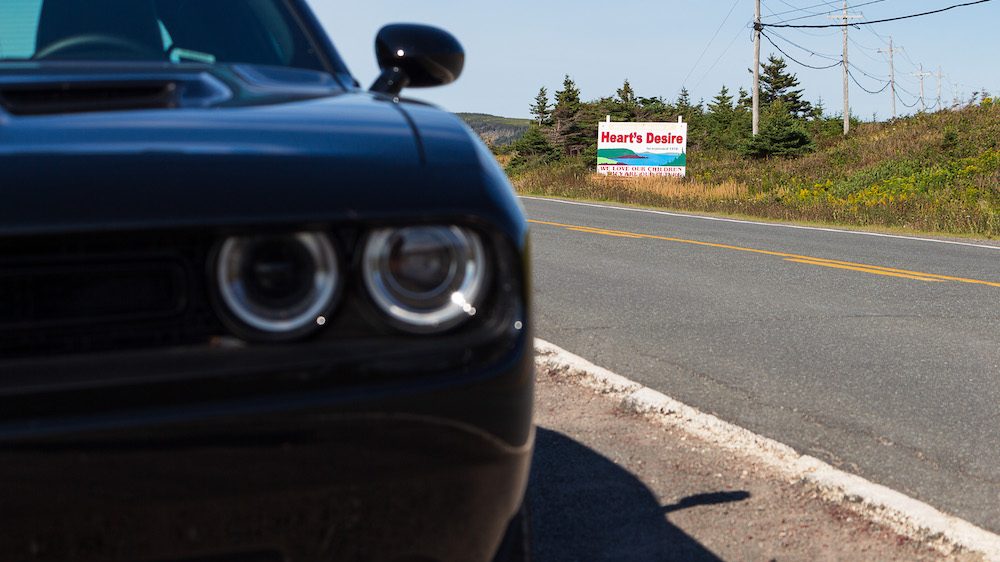 Because it’s on that coast, along Trinity Bay, where you’ll find Heart’s Desire, Heart’s Delight, and even Heart’s Content.

Heart’s Content is where the first trans-Atlantic telegraph cable made its western end.

The cable was dragged ashore and connected in 1866, making near-instant communication between Europe and North America possible for the first time. As long as you didn’t mind it being read a few times on the way over.

This little Newfoundland town connected North America to Europe for over a century. You can tour the original cable station.

Continue down Route 80, where the speed limits are finally high enough for you to stretch the car’s legs a little bit.

The wide low windshield of the Challenger is filled with ocean views, marine birds, and houses that look straight out of a CBC Heritage Minute. 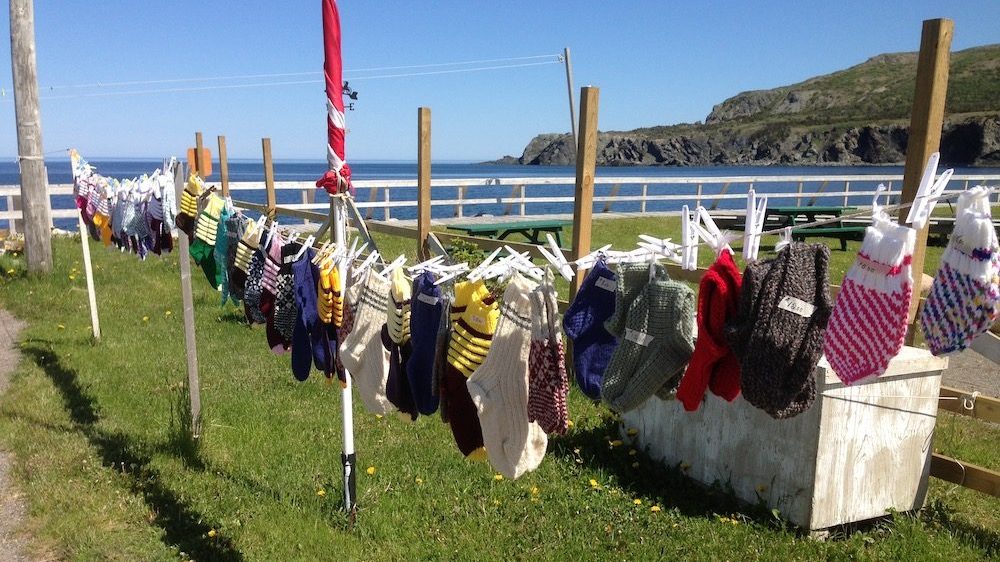 Finally, we are approaching the town with the world-famous name

Then, the final town before you get back on the Trans Canada Highway. The one that’ll make you do a double-take when you see the town sign. 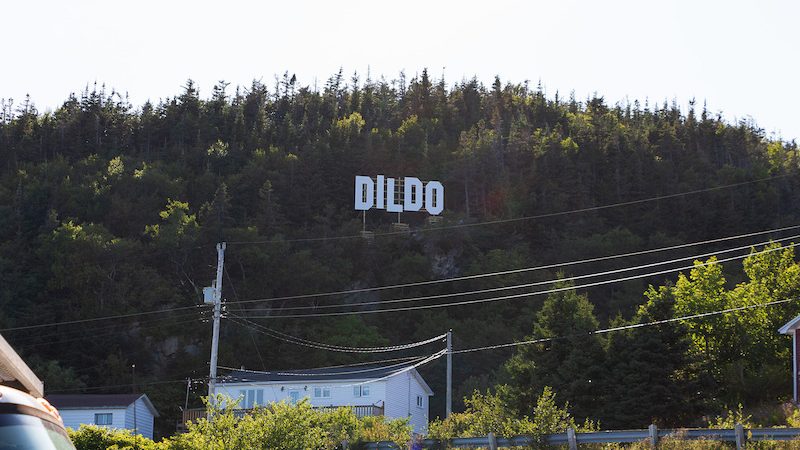 The citizens of this small ocean community took the whole thing in stride of course, having embraced the first rule of the road trip vacation: Go with the flow.

If your town has a name that would make yer mudder blush, plus some stunning scenery, you go with it.

So my apologies to car rental agency at the St. John’s airport if there were still some sprinkles in the cupholder.

That’s what happens when you slow down, stop along the way on the Baccalieu Trail and, of course, snack on delicious Dildonuts while keeping an eye out for moose. 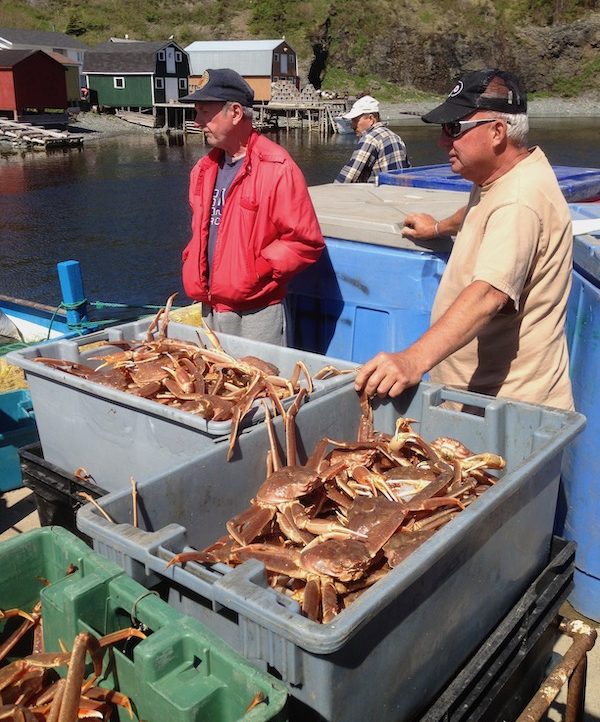 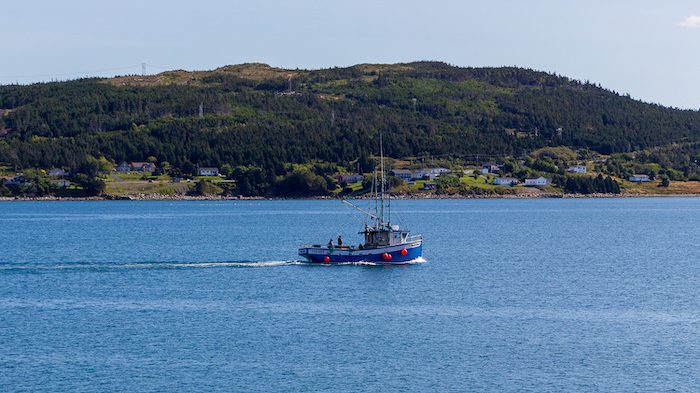