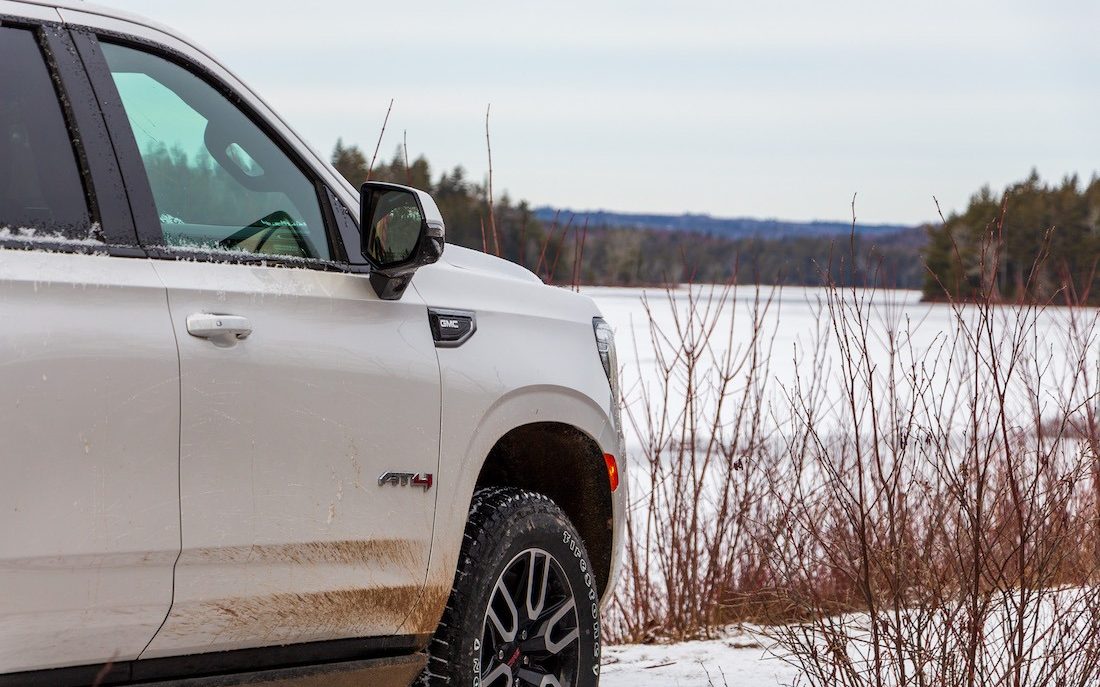 Crossing Nova Scotia in a GMC Yukon AT4 without Touching Pavement

Winter is one of the best times to go exploring off-road in Atlantic Canada. Especially if you have an off-road specialist, like the 2021 GMC Yukon AT4, at your disposal.

It’s why, on a lazy Sunday afternoon, I went exploring, with a goal of crossing the province without touching asphalt. It was one of those little day trips I had been thinking about for years but a lack of maps and the ever-present ‘maybe next month’ got in the way every time.

Not this time, because conditions were perfect. Frozen ground, a light dusting of snow to fill in some of the worst of the potholes, the bugs of summer are gone for when it’s time to step out for some fresh air or a run with the dog, and some updated satellite imagery. If I didn’t make too many wrong turns among the trees, I could come pretty close to making it. 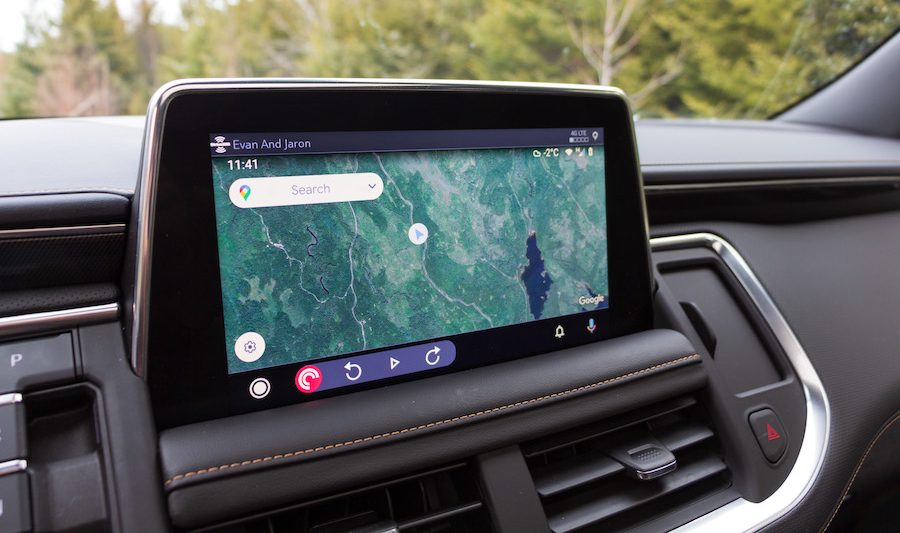 Along with the latest off-road specialist offering from GMC, the all-new Yukon AT4 with an air suspension lift, magnetic shocks, skid plates, and a special front bumper in case I happened to misjudge a rock or pile of brush.

You don’t need an off-roader like the GMC to explore the province’s extensive network of logging roads, at least not this time of year. You really don’t even need four-wheel drive when there’s no snow, little ice, and the mud has gone hard – you’re on your own in the spring when it all melts.

You just need some slightly more rugged tires than your average passenger car and a little bit of ground clearance. In short, just about any crossover could make this trip and many more like it, you just might go a little bit more slowly. Sure there’s always the ATV, but a crossover is a lot more comfortable and gives you a wider choice of routes home.

Slowly isn’t a bad thing, because this isn’t a trip about driving quickly, it’s about taking in the scenery. It’s about exploring seldom-travelled portions of Nova Scotia.

This trip is about getting close to pristine lakes, to old-growth forest, and spying the tracks of animals running and playing where they call home.

Using a lifted 4×4 with a magic ride control suspension, though (Ed. That’s magnetic ride), makes it much more comfortable and means I’m not worrying about getting stuck. And I don’t need to figure out who in my friend group is willing to come out and rescue me.

I wanted to drive until the cell phone signal died then get out and listen. Hear the trees rustling, the ice cracking, and the squirrels scurrying without hearing the constant sounds of civilization. There aren’t many places left, especially in populated provinces, where you can do that. On an unused logging road, you’re a lot more likely to find that serenity. 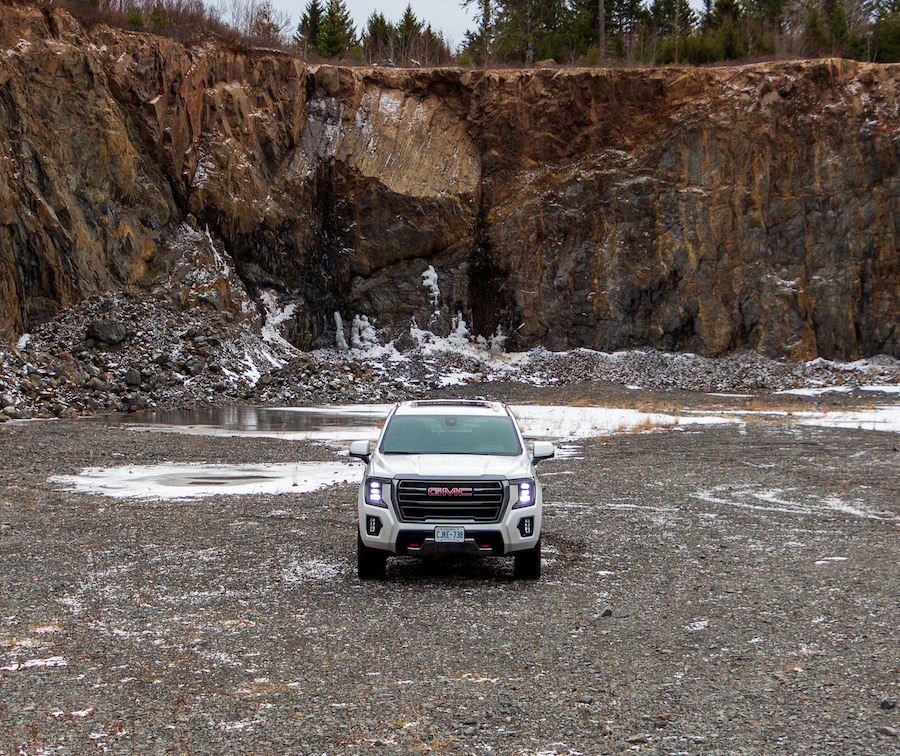 This trip is about going the wrong way and finding, well, nothing… the silence of nowhere

I’m not going to give you my entire route, not just because this isn’t the kind of trip that should become a well-travelled run or a strange shortcut, but because telling you the roads would be to miss the point.

This is about getting a map and exploring. Going the wrong way, turning around, and trying again. It’s about getting lost and finding, well, not yourself, it’s not that life-changing, but about finding and enjoying nothing.

I will tell you that the trip both started and ended near hydroelectric powerplants, a situation that surprised me since the middle part was marked with clean power as well.

From the top of a remote hill, seeing both new and old renewable electricity sources at the same time was extra special even if I couldn’t capture them in a single photo. It made me wonder when a plug-in hybrid or electric version of this Yukon might arrive to take advantage of our increasing green power network and add to the silence of nowhere. 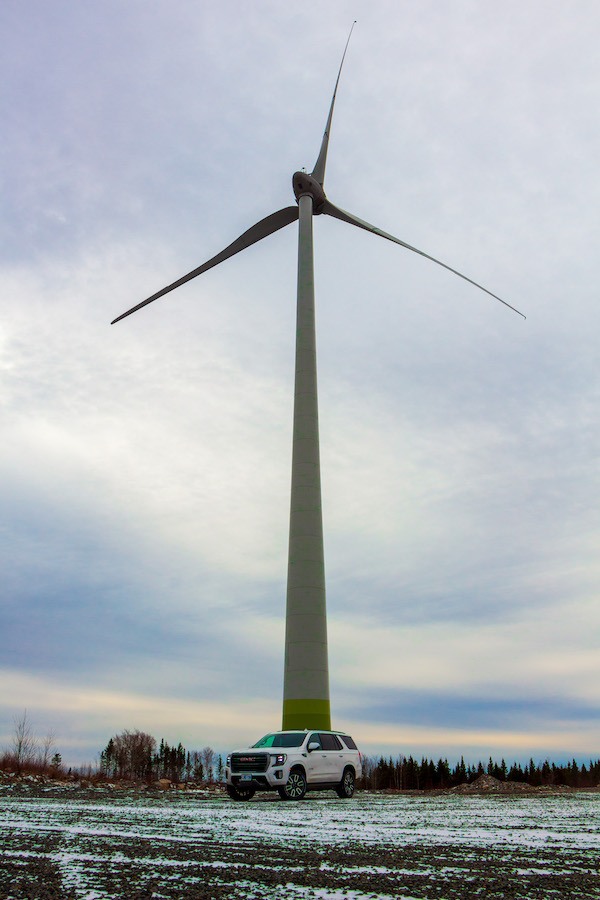 The province publishes a map of the logging roads and trails of NS (NB, PEI, and NL offer the same) with a lot more detail, but neither that, the satellites, nor the ATV trail rider maps show you what the trail will look like when you get there.

On a map, a gravel road newly laid for wind turbine installation and maintenance looks the same as a dirt track that hasn’t been touched in a decade or more. The former means you can make time, the latter that you’ll need to turn around and try again. If you value your paint, that is. 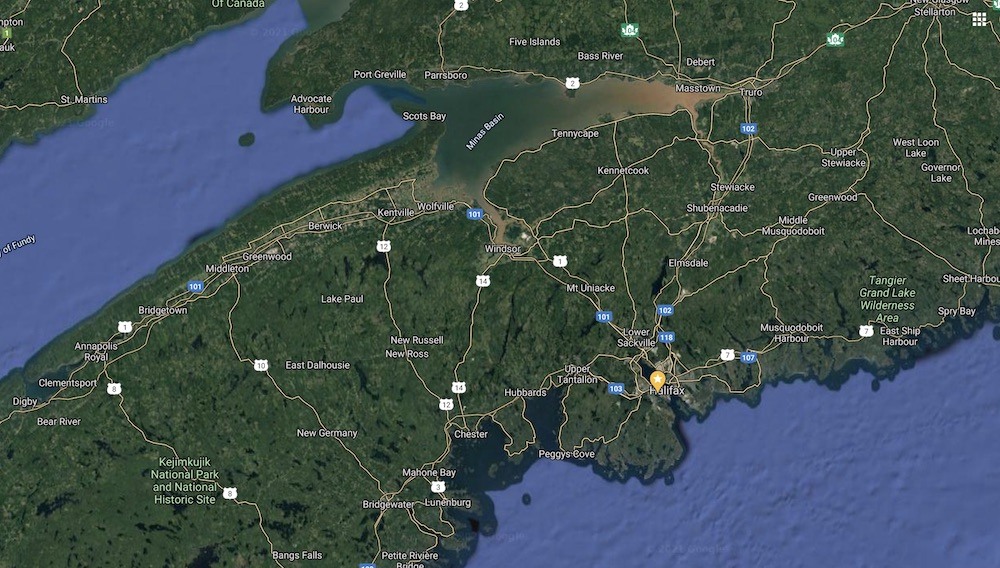 That doesn’t matter for most exploration, when I’d just stop and have some lunch before trying another branch of the trail, but I’m on a mission. One that baffles the ATV riders I encounter who all wave with a friendly, if confused, smile from behind their mud-spattered and tree scratched visors.

I make stops for photos, and to enjoy the silence. Though any thoughts that I am alone are trounced by the expanses of clearcut. Nothing brings the devastation of a clear cut forest into focus like seeing acres of felled trees, brush entwined and scattered, blocking the sun from reaching the soil, in the dead of winter.

The piles of shotgun shells I encountered at every stop are equally worrisome. In just one drive, I saw hundreds of empty and discarded plastic and brass casings in a red and gold growth carpeting the rocky turn-outs. I was constantly surprised by the sights along the drive, both man-made and natural.

The number of lakes in this province is tough to comprehend from a map until you are stopped at the top of a hill and can see more than a dozen just from that one place.

Birds soaring before striking at prey visible on the fresh dusting of snow trading places with manmade wonders like electric windmills (I didn’t realize just how big these things were).

The Yukon, as massive and imposing as it is, had no trouble making it through the trip. That is, of course, no surprise, but I was surprised at just how well the magic of magnetic ride made the drive almost as smooth as it would have been on pavement.

It felt a bit like cheating, especially after the tired, dirty, and cold-looking ATV riders I saw. Had it been warmer, I would have stayed in the most remote of the spots, where that line crossed though my phone’s bars, and watched shows on the rear-seat screens until sundown, at which point I’d have waited for the stars to really put on a show.

After nearly ending up in a lake, crossing over dams, finding a startling number of no longer used quarries, passing hikers, dog walkers, ice-fishers, and campers, and spending more than two hours to cover a distance of about 30 kilometres as the crow flies, I’ve reached as close as I can to crossing the province on dirt. At least for today.

From St Margaret’s Bay to within sight (thanks to some elevation) of the Minas Basin, I’m calling this trip a success.

Can I do better, making it all the way to the Bay of Fundy in the dirt? Even better, can I make it from the open Atlantic to the Northumberland Strait? There’s only one way to find out. Keep exploring the roads less travelled and seeing where they go.