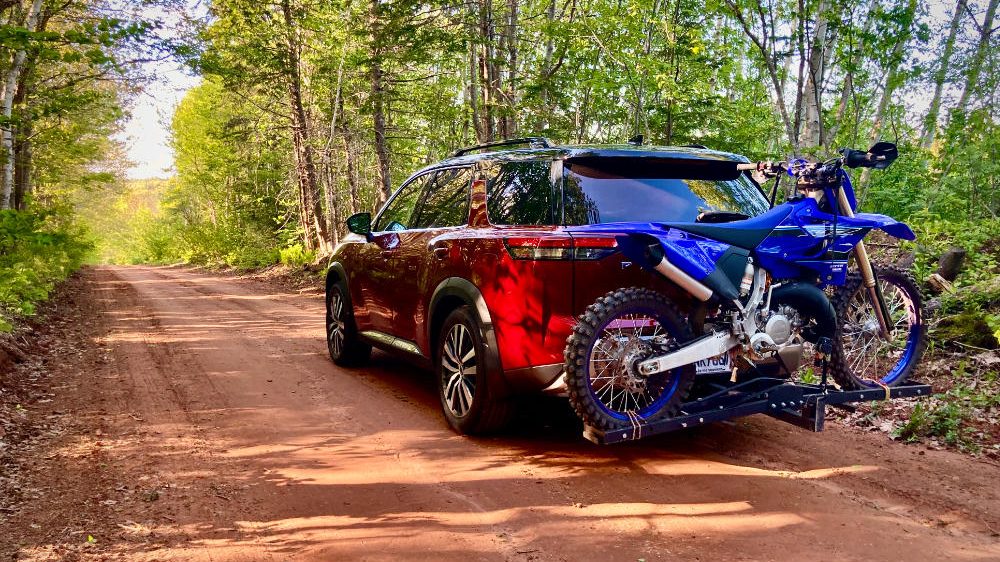 Can we find an off-road destination in the 2022 Nissan Pathfinder in Toronto?

Thirty-two years ago, when my desire for Nissan Pathfinder ownership began to flourish, there was no panoramic sunroof.

No ventilated seats, no Around View Monitor, no head-up display, no rain-sensing wipers, no nine-inch centre display to house a CarPlay system for an Apple brand that had just introduced a computer with four megabytes of RAM.

Semi-aniline quilted leather? Uh, no. Not in 1990. The 1990 four-door Pathfinder, you won’t be surprised to learn, did not include navigation-linked ProPILOT Assist to keep you centred in your lane.

That first four-door Pathfinder was, in close concert with most SUVs of its day, a relatively bare-bones pickup truck with an enclosed bed and an extra row of seats. And small pickup trucks in the early 1990s were not, shall we say, the most sophisticated devices.

In the intervening years, Nissan switched back and forth between truck-based and unibody construction, but there’s no denying that the fourth-generation Pathfinder of 2013-2020 was the most car-like yet.

A more rugged Pathfinder from Nissan

Nissan wants to leave a more rugged impression with the new-for-2022 fifth-generation Pathfinder. To put impressions to the test, we decided to emphasize the U in SUV for a proper challenge of this top-spec 2022 Pathfinder Platinum.

It’s time for a vintage Pathfinder test with an on-board dirt bike and a snowmobile cabin with no address somewhere in Toronto.

Toronto, Prince Edward Island, that is.

To be honest, on a regular Tuesday school night with the kids in the back seat, I don’t know exactly where we’re headed. To begin with, I can’t remember the name of the cabin, which is easy to locate when simply following PEI’s groomed snowmobile trail system but more challenging on four wheels.

Moreover, while in theory Google Maps’ satellite view should be helpful, finding a lodge in the woods of a mostly uninhabited part of the Island isn’t as easy as I expected.

I do know, however, that a path will open up off of a dirt road somewhere between Toronto, Saint Ann, New Glasgow, and Hope River, just south of Cavendish. I just need to find the right dirt road.

To approach the general vicinity, we veer off St. Marys Road onto Grady. If at any point the recent rains or typical spring softness leaves our approach to the cabin impassable, I’ve loaded my Yamaha YZ125x onto a hitch-mounted rack.

Indeed, Grady Road’s long downhill and steep uphill are severely rutted and misshapen. It’s nothing I wouldn’t attempt in a Sentra, at very careful speeds, but the boys in the back want to experiment with the Pathfinder’s tech.

We flick through Standard, Sport, Eco, Snow, and Sand to land on Mud/Rut. (There’s a Tow mode, as well.) These modes don’t transform the Pathfinder’s off-road capability – they primarily play with throttle response and torque distribution.

But we’re not even off-road yet. We’re just on a particularly rough stretch of PEI’s maintained red dirt roads – there are over 1,500 kilometres of such roads in total in this tiny province.

It’s not until we spend some time driving in and out on a bunch of potential Turner Road exits that we finally find what we’re looking for. I figured I’d know it when I saw it – I’ve been here a dozen times on a sled and once, entirely without intending to, on my old Suzuki DRZ400SM.

It’s not a long drive into the woods from Turner to the Pine Tree Lodge, but we quickly find plenty of mud and puddles the size of small ponds. The kids were ready for it, hopping out to find sticks that could sound for depth.

The Pathfinder was in no immediate mortal danger.

Sure, PEI’s deep puddles can be more than a little sketchy due to the fact that, as locals say, “There’s no bottom to’er.”

But the Pathfinder forged ahead and the dirt bike was never required. (Though that lack of necessity didn’t stop me from briefly checking out the surroundings on two wheels while the kids swatted at bugs.)

As always, Pine Tree was immaculate inside and out. It’s not the sort of place you’re going to find on Expedia. It’s just one of a number of hidden gems in the area for Island powersports enthusiasts, along with CooCoo’s, Louie’s, and Willie’s.

As for the Pathfinder, this off-road challenge was not a significant one. Perhaps that’s because it’s simply more than capable; perhaps it’s because the route wasn’t all that treacherous.

In a world where too many YouTube reviews consider ‘off-road’ as anything that isn’t paved, it was fun to, well, find a path.

Yet in the end, it wasn’t the Pathfinder’s Mud/Rut setting that impressed.

As much as I wanted to forget the modern conveniences on a quest to remember the original Pathfinder, my cooled seats were on full blast. The kids were watching through the panoramic glass roof as the tree canopy unfolded itself. Tom Cochrane’s Life Is A Highway was absolutely cranked through all 13 Bose speakers, and the Rear Door Alert reminded me I brought my kids along for the journey.

All of that was happening as we traversed through the mud on a wooded snowmobile trail accompanied by the near silent whisper of a 284-horsepower V6.

It sounds like progress. It appears as though an awful lot can happen in 32 years.